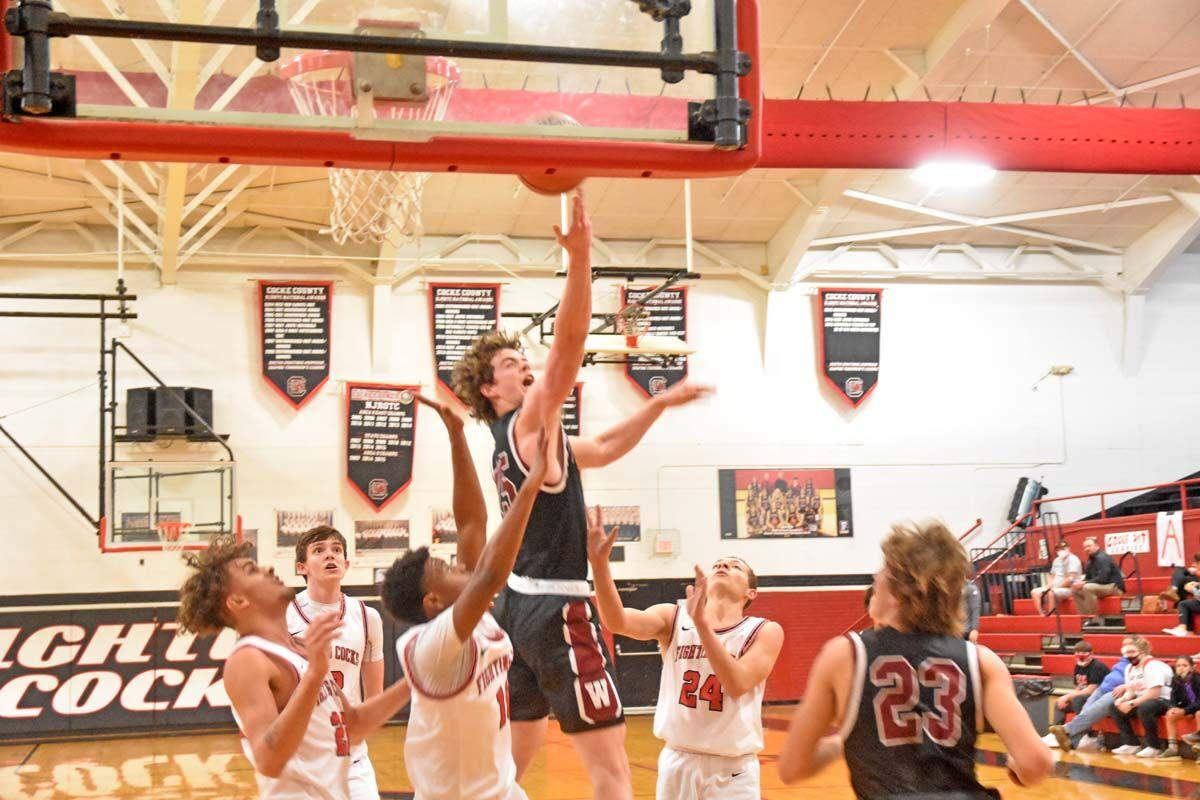 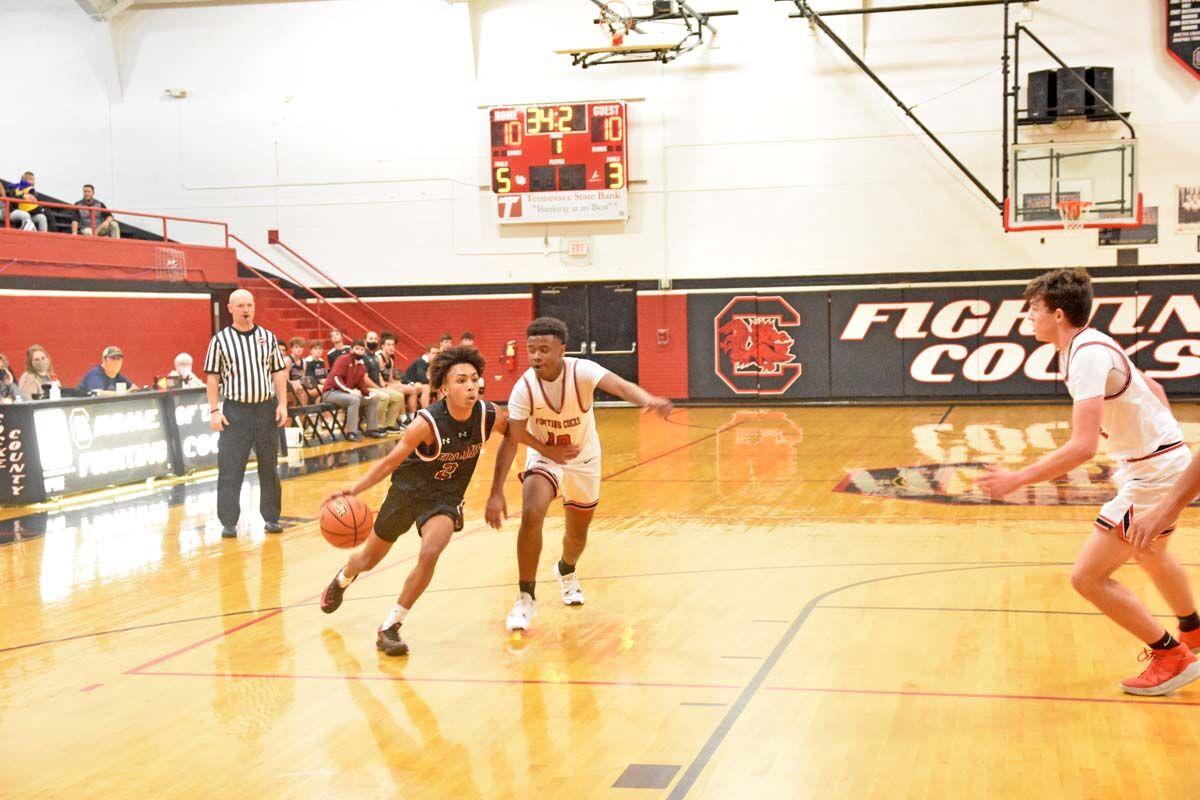 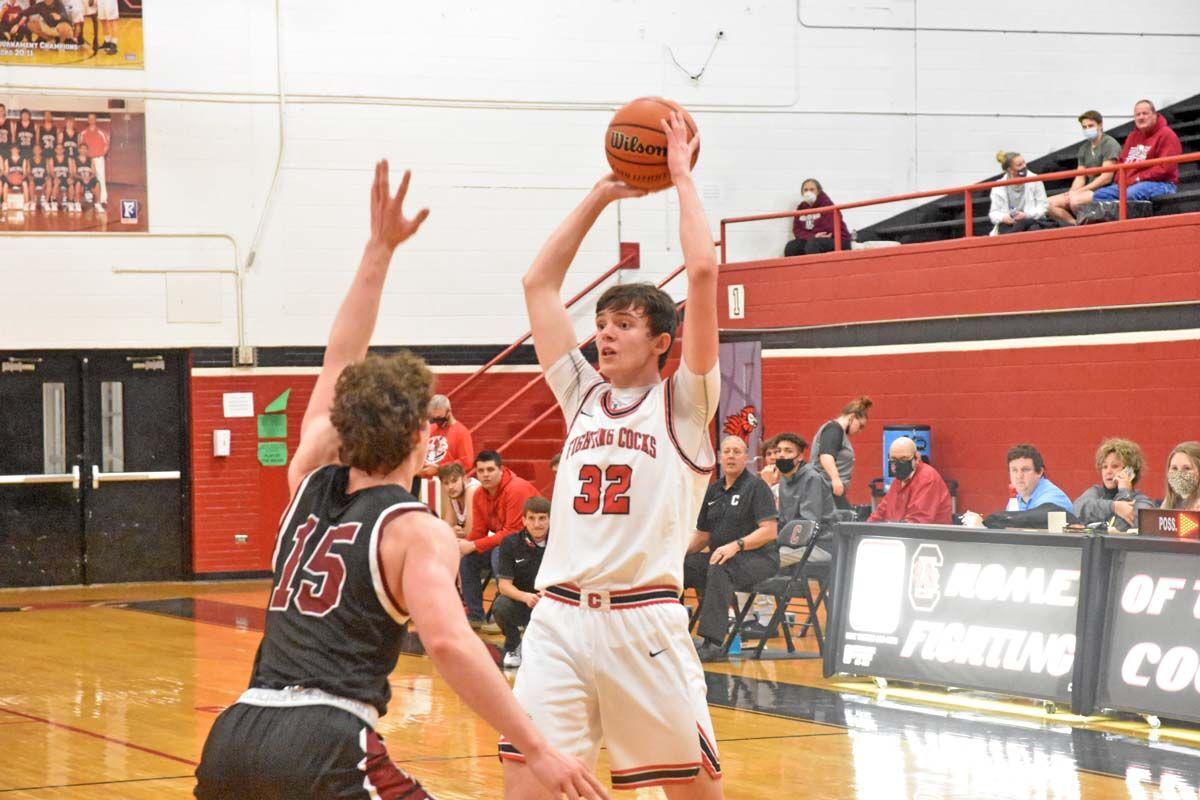 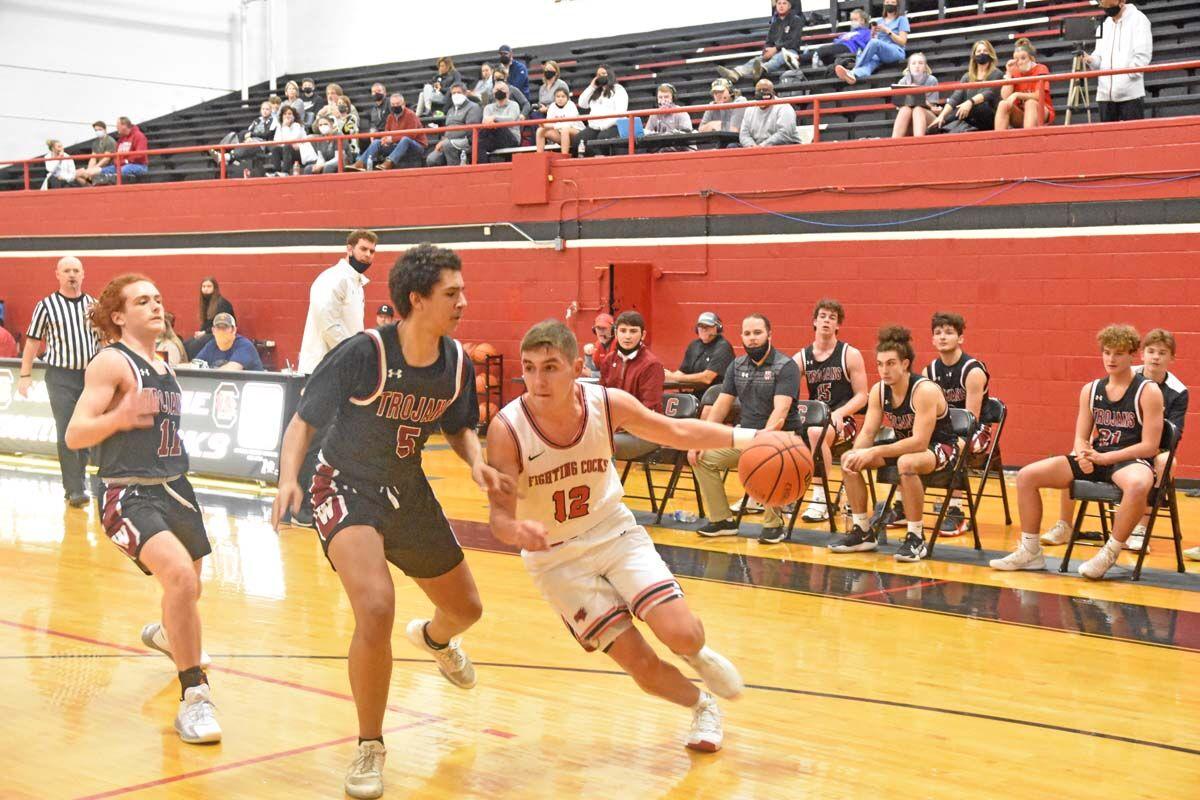 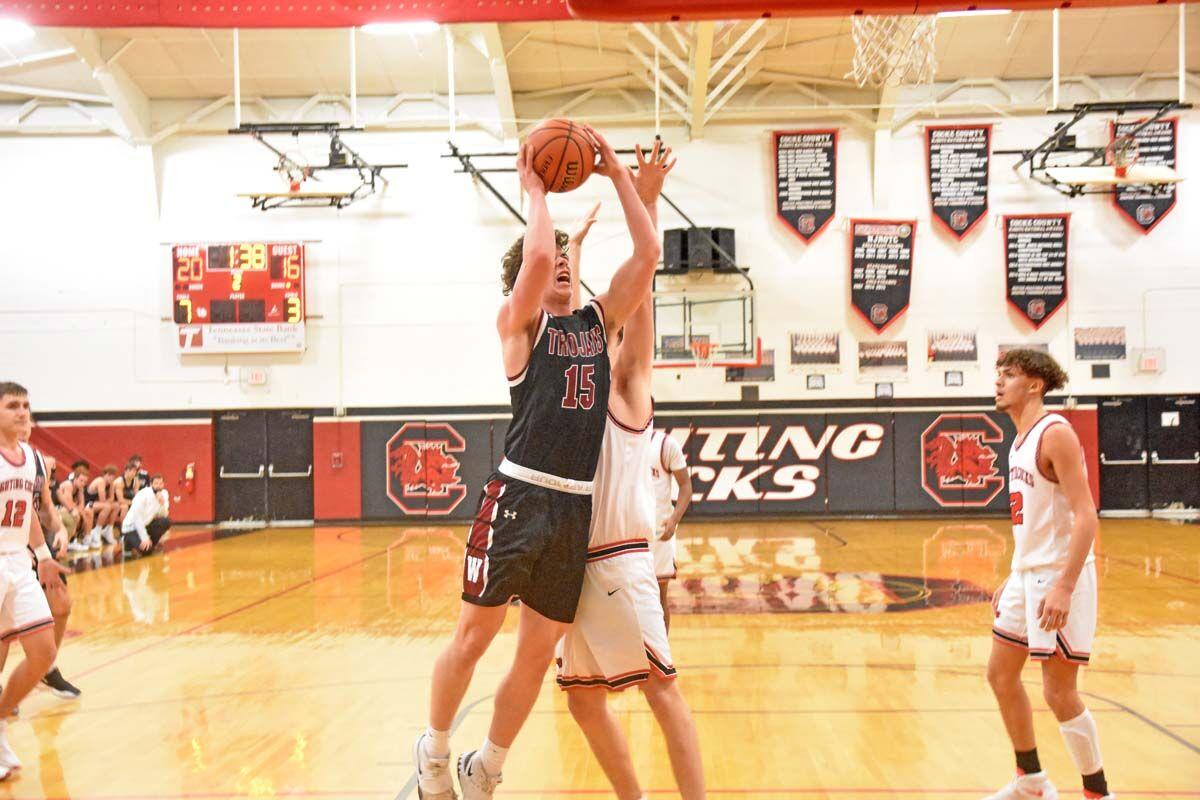 Morristown West’s Joey Hancock (15) goes up for a contested shot on Tuesday against Cocke County. 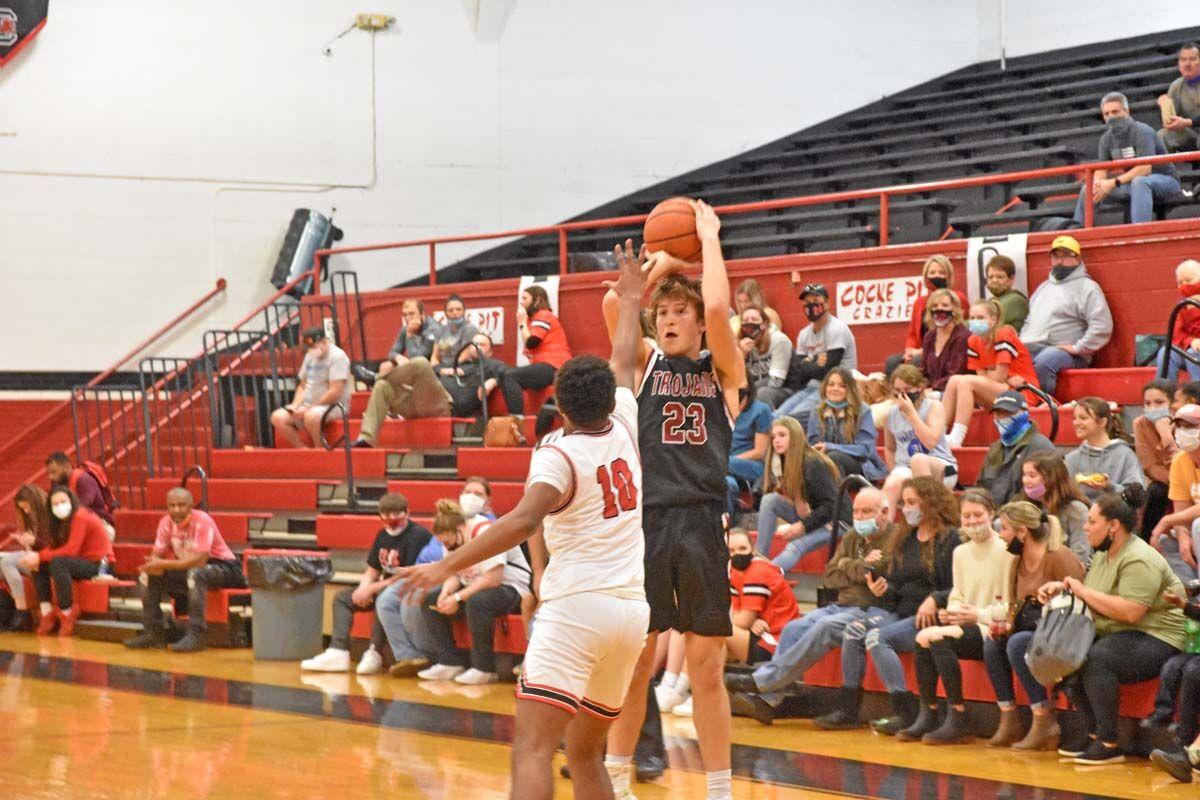 Morristown West’s Joey Hancock (15) goes up for a contested shot on Tuesday against Cocke County.

NEWPORT — Only 3.7 seconds stood between the Cocke County Fighting Cocks and a victory on Tuesday night but a surprising finish stunned them at home.

Morristown West’s Ji Batts sprinted with the ball down the sideline and heaved up a prayer from behind the 3-point line as time expired to send the game into its first overtime. The Trojans needed more than extra five minutes of basketball to come away with a win, though, as the game went into double overtime ending in a 51-48 victory for West.

“We had one play I wanted to use with three seconds remaining,” head coach Jonathan Smith of West said. “It was a double streak up the sideline. It is a play that I have watched a million times on film and we were able to execute that. I usually would like one more dribble closer to the 3 before pulling up for the shot, but I’ll take what we got.”

The District 2-AAA matchup had indicators of going into overtime all game as neither team could break away from the other.

“I told our guys that a win is a win no matter how many points you win by,” Smith said. “I think this is a good test for us at this point in the season. Obviously, you don’t draw it up like that but we found a way to win a close game. I think it showed we have some fight in us.”

It was Joey Hancock who scored the only five points for West in the second overtime to secure the victory. Hancock poured in a game-high 27 points.

The Fighting Cocks were led by Keaston Jackson’s 12 points.

“Hancock had to have a double-double,” Smith said. “I am proud of him and his effort tonight. He was so important for us the whole way. He had some dry spells but he never let it affect his game. He stayed aggressive and we needed all of his points tonight.”

Cocke County shot 7-of-11 from the foul line including knocking down seven of their nine shots from the line in the fourth quarter, which kept them right with the Trojans.

Batts did not play many minutes but he made sure to make the most of the final seconds of the game that he was in. He finished with just three points as the contested buzzer-beater was his only made shot after going one-of-four from the field.

“I wasn’t expecting to be in the game at that time,” Batts said. “I told one of the guys that if everything fails just give me the ball and I will make something happen. Luckily, I hit the shot I needed to hit so I didn’t let them down.”

Cocke County is hanging on to the fourth seed in District 2-AAA by a thread now after the loss. Morristown West remains at the fifth-place spot.

“I think this win against Cocke County only helps us going forward,” Smith said. “(Cocke County) played a great game and were more physical than us most of the game. We needed to see that and we gained some confidence with this win. We have to be ready for East now.”

The Trojans take on Morristown East on Friday at Michael R. Reed Gymnasium at 7:30 p.m. for their next battle.