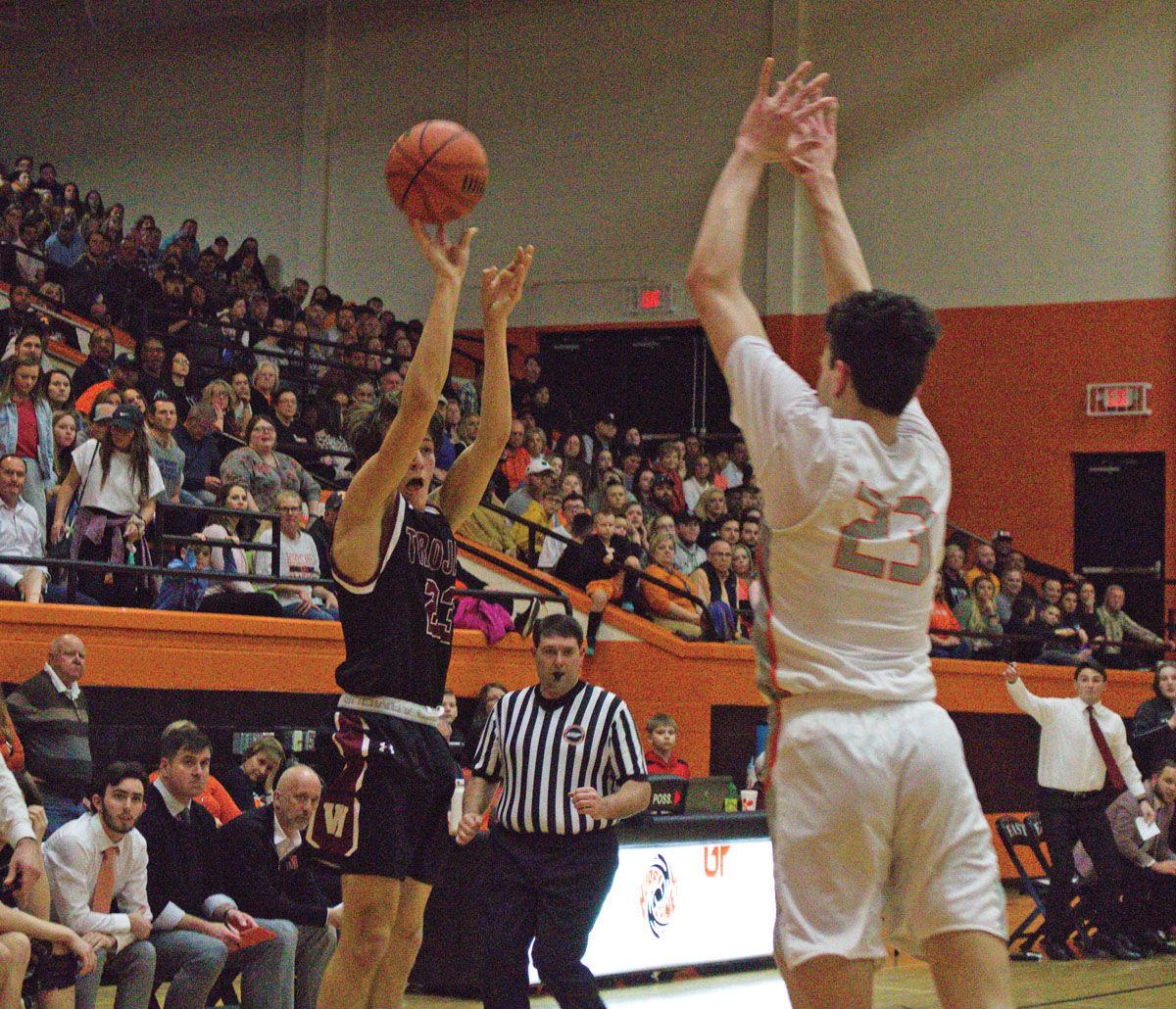 Morristown West’s Ryan Shafer (23) fires up a 3-pointer over Morristown East’s Braden Illic (23) on Thursday night. Shafer made seven 3-pointers in the game. 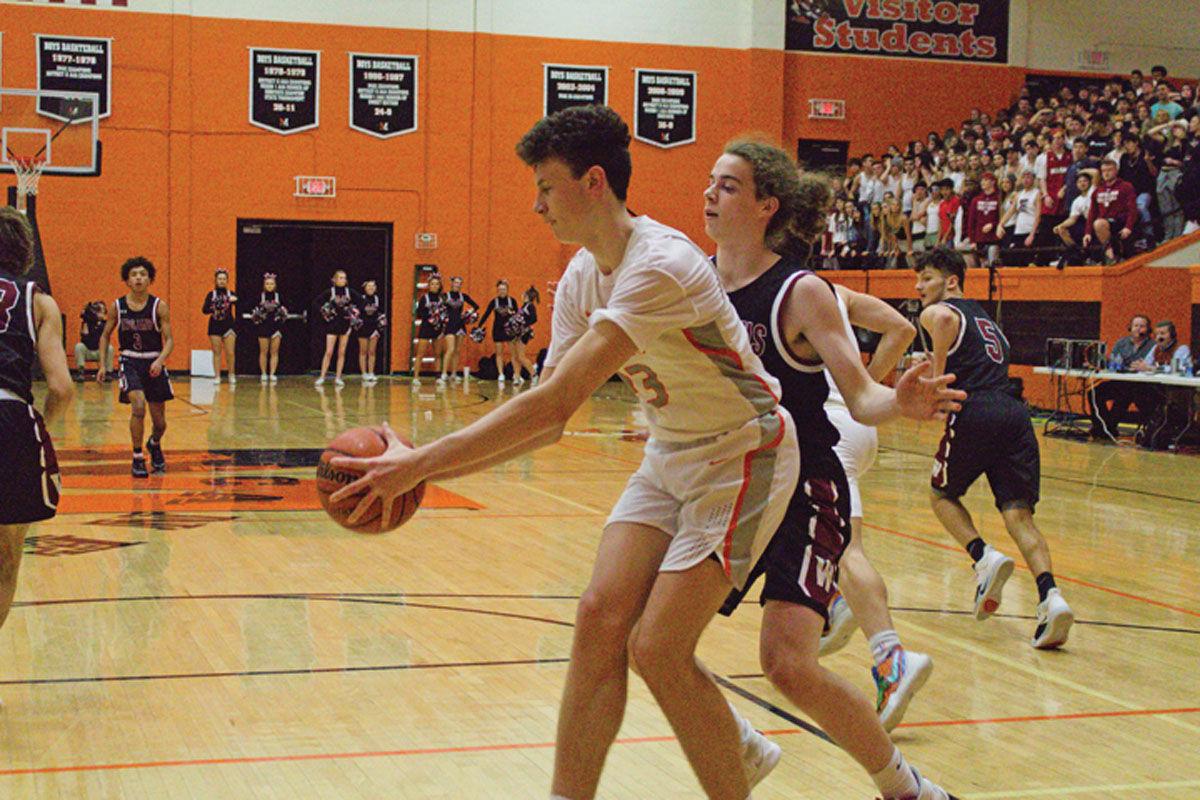 Morristown West’s Ryan Shafer (23) fires up a 3-pointer over Morristown East’s Braden Illic (23) on Thursday night. Shafer made seven 3-pointers in the game.

Morristown West’s Ryan Shafer put on a shooting clinic Thursday night at Isenburg-Siler to lead the Trojans to a 56-53 victory over cross-town rival East to split the city championship series.

Playing before the biggest crowd in years and a regional television audience, Shafer, who hasn’t been know as a long-range sharpshooter, gunned through seven 3-point baskets to propel the Trojans to their 14th win against eight losses.

Micah Simpson scored 21 to lead the Hurricanes who got 13 from Braden Ilic and eight from Cole Henson.

It was the 10th loss against 11 wins for the Hurricanes who are now 5-3 in league action.

The Trojans didn’t hit a two-point basket in the first half when they fired through seven triples. They added four more in the second half and wound up 11-of-21 on the night from long range.

East hurt its chances with a terrible free throw shooting night as the ‘Canes made only 6-of-14.

The Hurricanes led by six early in the fourth quarter, but West reeled off an 11-2 run to take the lead. East never caught up again.

Henson then hit a clutch three from the left corner to get the ‘Canes within three at the 40.5 mark, and East called a time out.

East had to foul three times before getting the Trojans in the bonus and the clock was down to 13.4 seconds by then. The free throw was missed, and the Hurricanes rebounded. Simpson was fouled just as he got the ball to the front court and missed the free throw with 8.4 on the clock.

Ilic battled to pull in the rebound and got the ball back out to Simpson who launched a three that was too long as the Trojans held on.

West coach Jonathan Smith said, “I’m just so proud of my kids tonight. I’m proud of what they accomplished because everybody who played tonight really had big parts in this win.

“And I couldn’t be more proud of our defensive effort,” he added. “You know Micah is just a good player, and he’s going to find way to score. He’s just about impossible to stop.”

“It just unbelievable to see us get smacked by Jefferson County and South-Doyle and then come back and respond like this. That’s the name of the game for a young team, and that’s to learn from your losses and get better.”

Smith said the atmosphere was unreal. “I know it’s a big game for our community and says a lot about the hearts of our guys to come in here and play like this tonight. I know we learned a lot tonight and it was a great win for our program.”

The coach also commented on the play of Davis in the final period. “He came in there and hit a basket and got some really big rebounds for us. He’s a good kid, and I know he’s been frustrated with his playing time but he found a way to contribute tonight.”

East’s Alden Collins said the Trojans shot great, especially Shafer. “You know a game that’s really important to the kids like this one is you see things like that. He hit the first couple and things just continued to build for him.

“With them shooting three’s like they did, it spread out our defense more and more and I thought Batts and Reyes did a good job of attacking the rim in the space it created.”

Collins added, “We hadn’t seen that kind of shooting from Shafer but tonight was his night no doubt.

“We’ve got to find a way to bounce back now. I know this one is a tough one to lose on either side because the rivalry is as good as it is.”

East scored the first three baskets of the game before Shafer hit his first three. After a free throw by Simpson, Shafer bombed in another and Batts added a trey to tie the game at 9-9.

Ilic knocked in a three from the top of the circle, and Cody Ridley scored inside for East. Lovelace drained a three to get West within 14-12 at the first break.

Triples by Shafer and Joey Hancock put West in front for the first time early in the second quarter, and they led 22-18 after Lovelace cashed in two charity tosses with 3:27 left in the half.

East moved back ahead as Simpson, Henson and Ridley scored consecutive baskets, but Shafer had one more three before the half for the Trojans. Simpson then scored at the halftime horn to give East a 26-25 advantage.

Ilic tossed in the first two baskets of the third stanza, and East led the entire period but never by more than five at 40-35. Shafer hit his fifth three with a minute left before Simpson scored to give the home team a 42-39 lead going into the final eight minutes.

Simpson sandwiched baskets around a rebound bucket by Davis for the Trojans and East led 46-40. That’s when West got baskets from Reyes and Lovelace to pull within two with 5:07 left.

Ilic scored in the lane but Patrick hit both ends of a two-shot foul and Shafer gave the Trojans the lead for good with a triple with 3:56 to play. Lovelace added a driving basket and Shafer nailed his final trey with 1:42 remaining to make it 54-48.

Simpson’s bucket got East within 54-50 before Batts made the basket the put the lead at 56-50.

East Vs. West - East scores inside