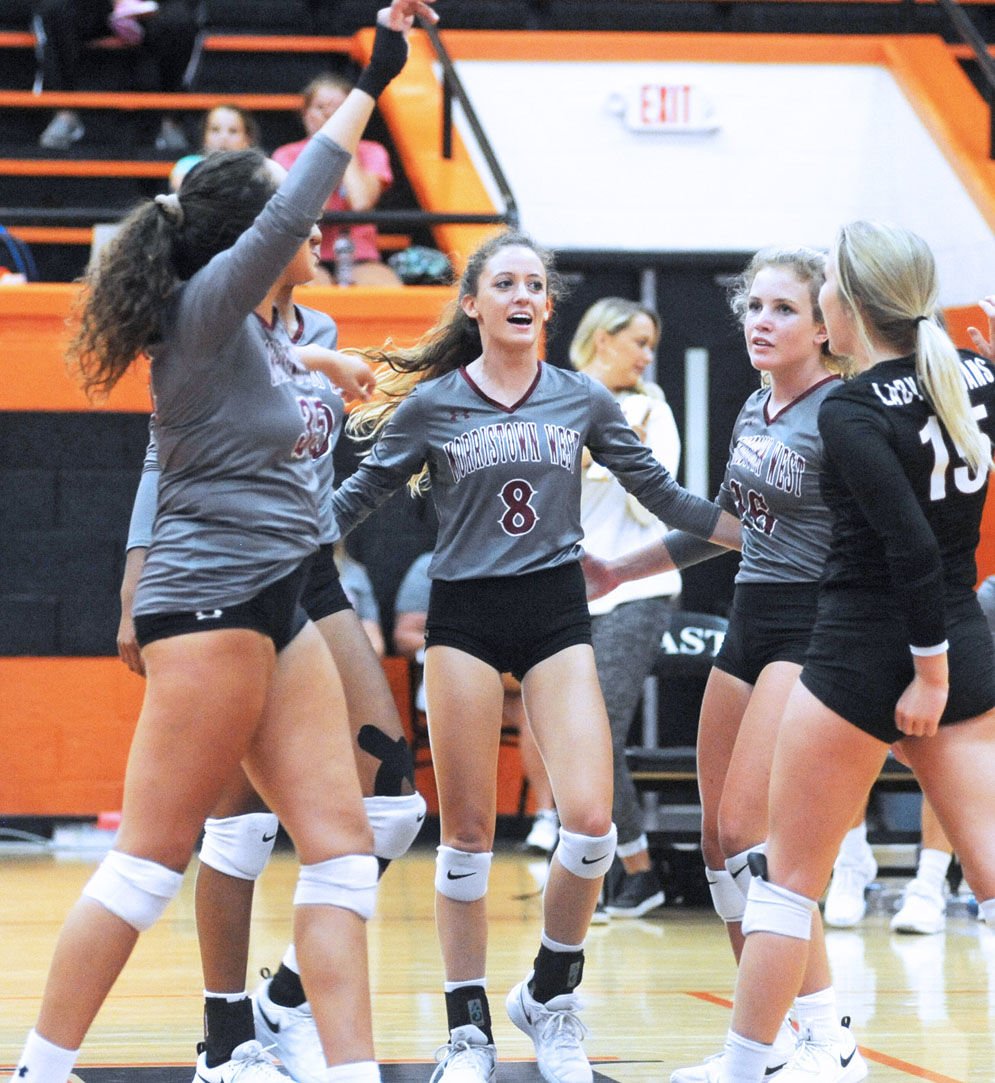 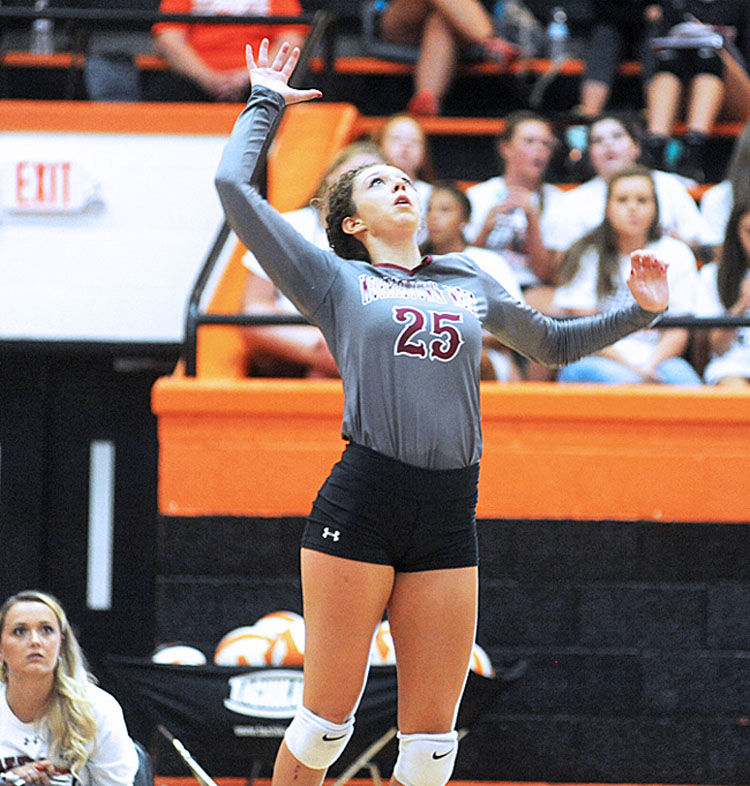 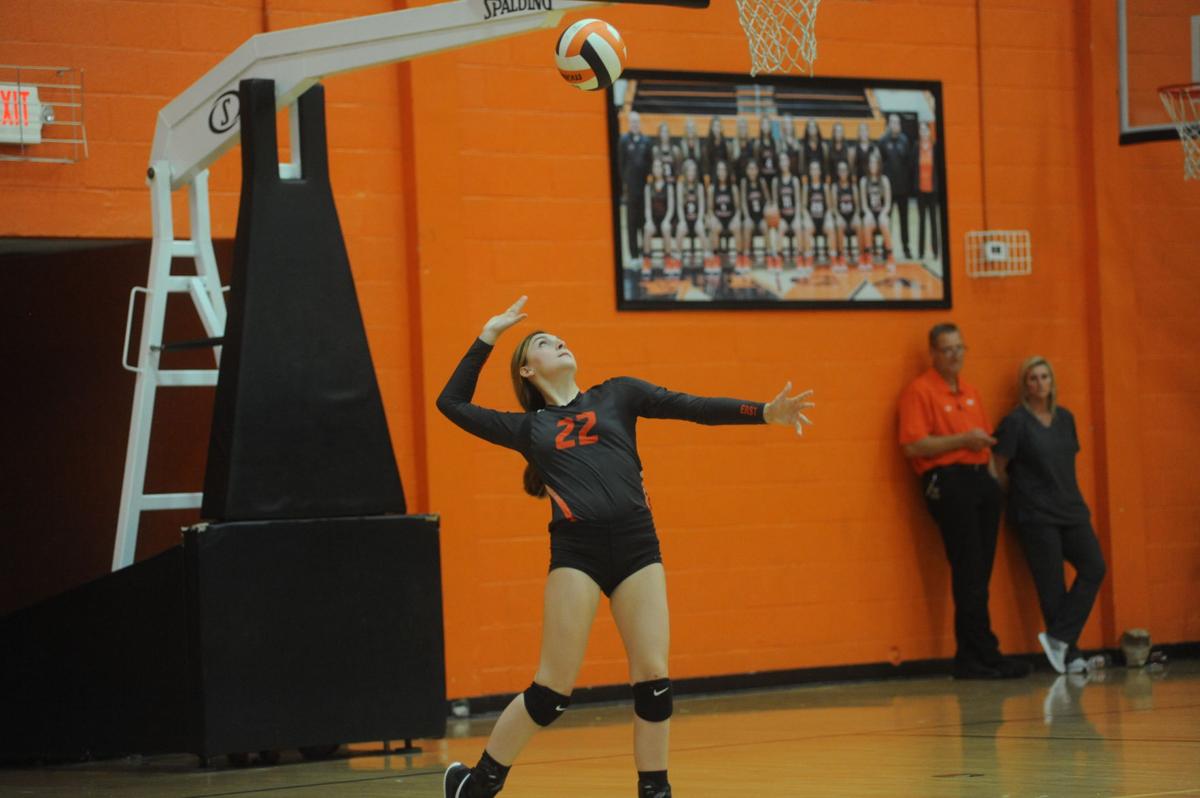 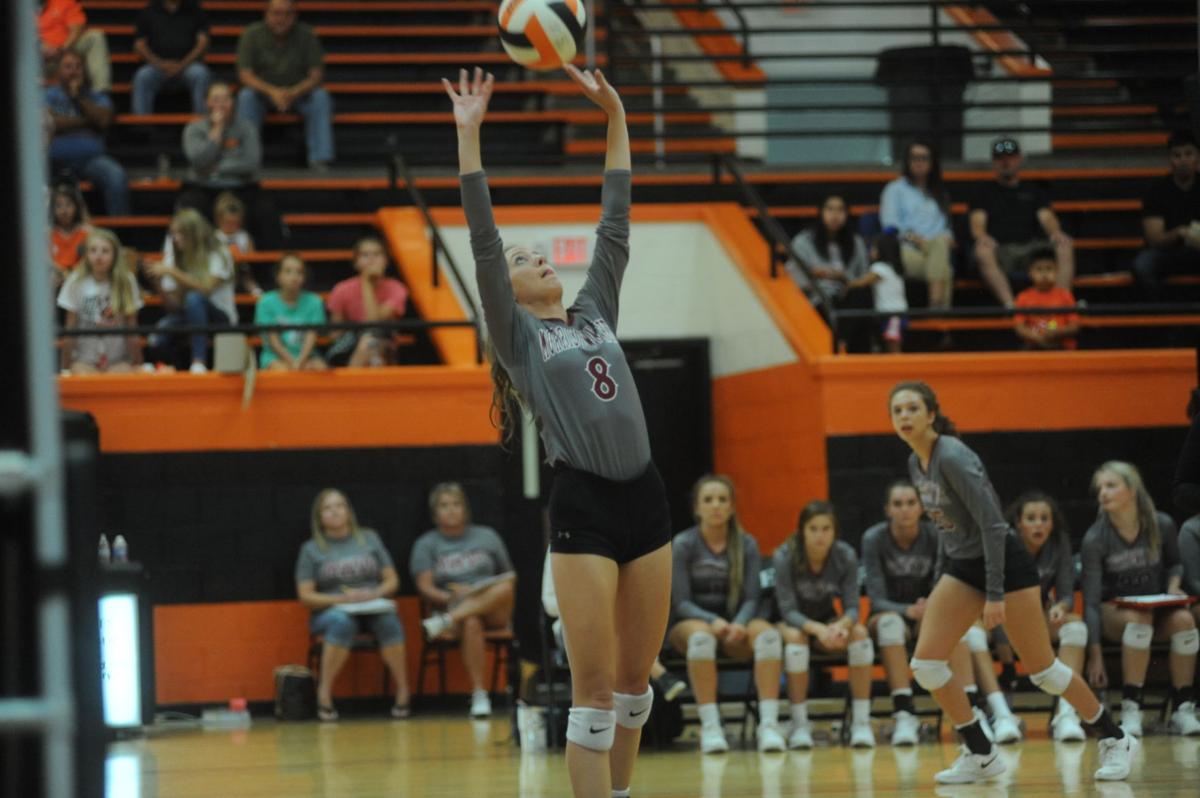 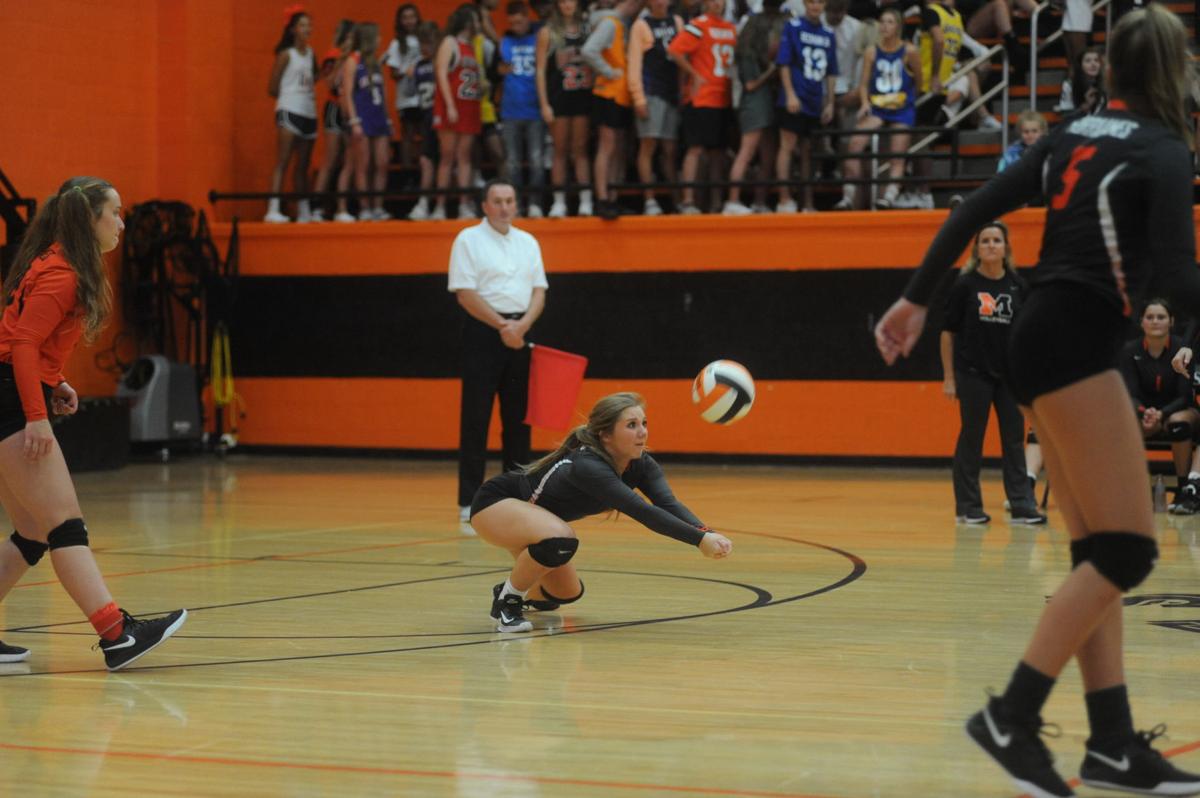 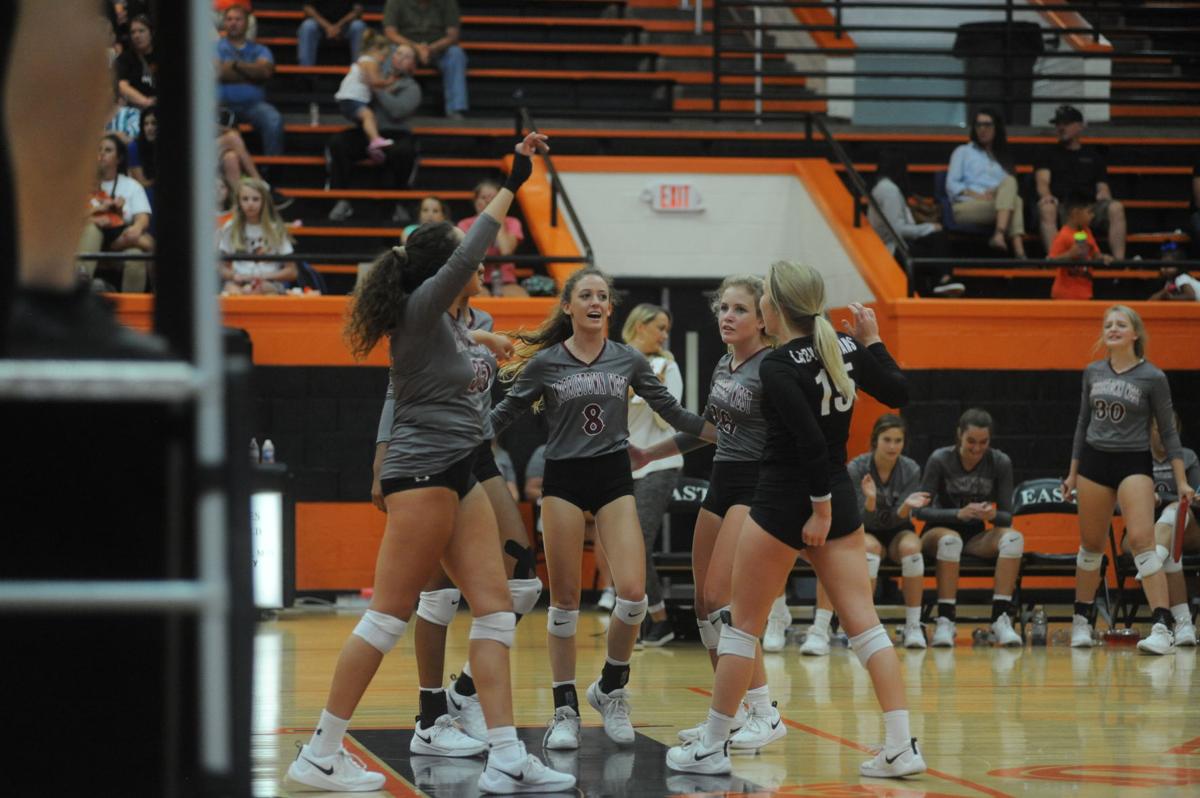 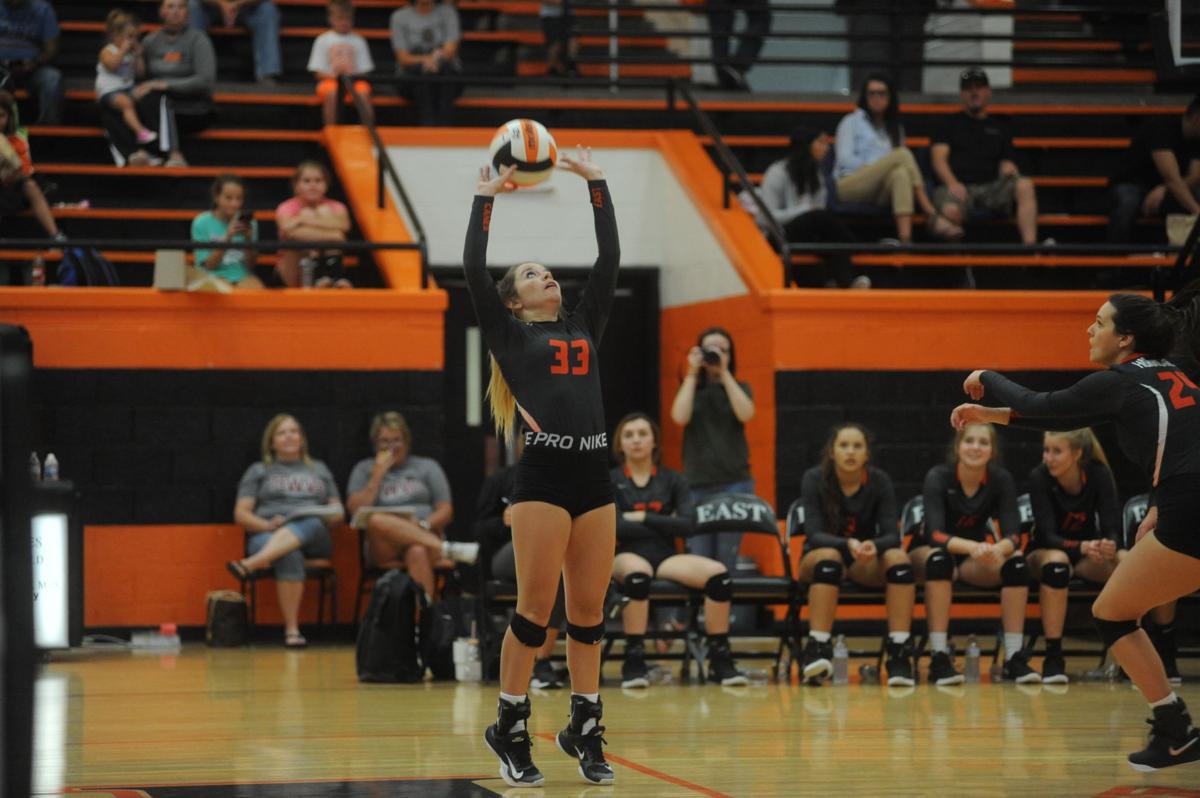 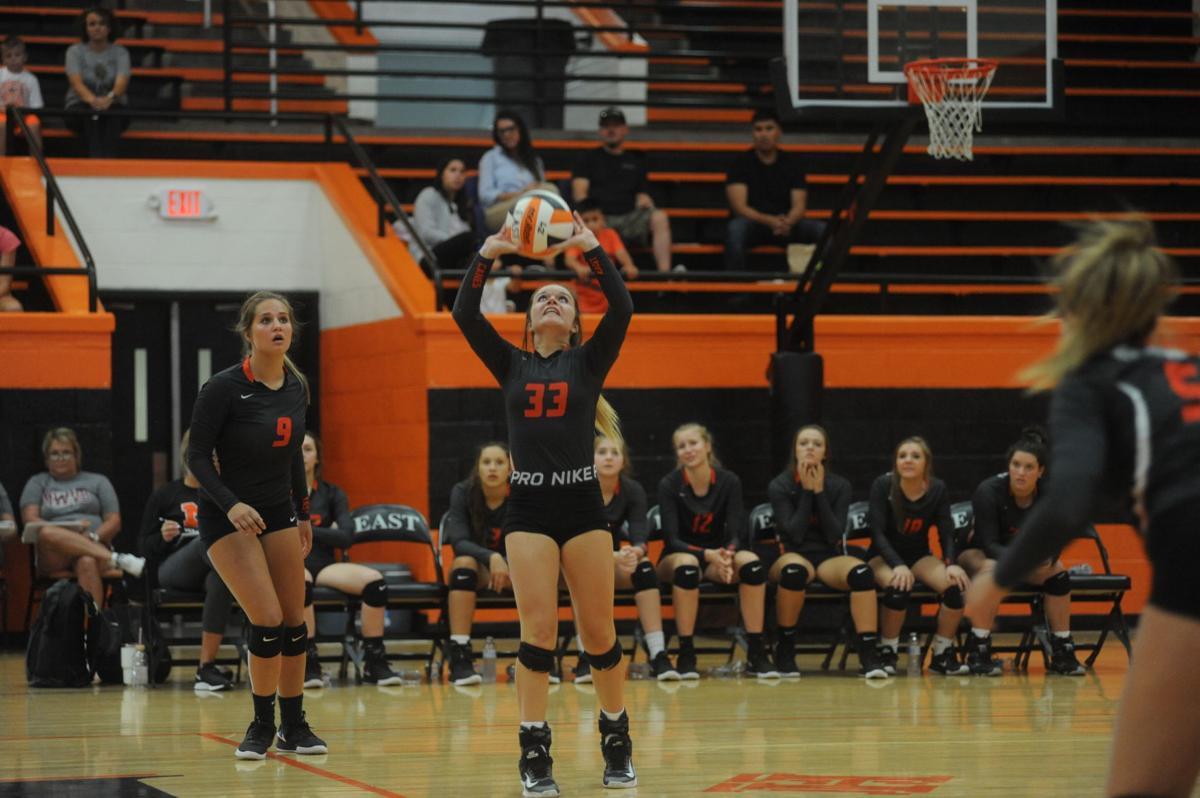 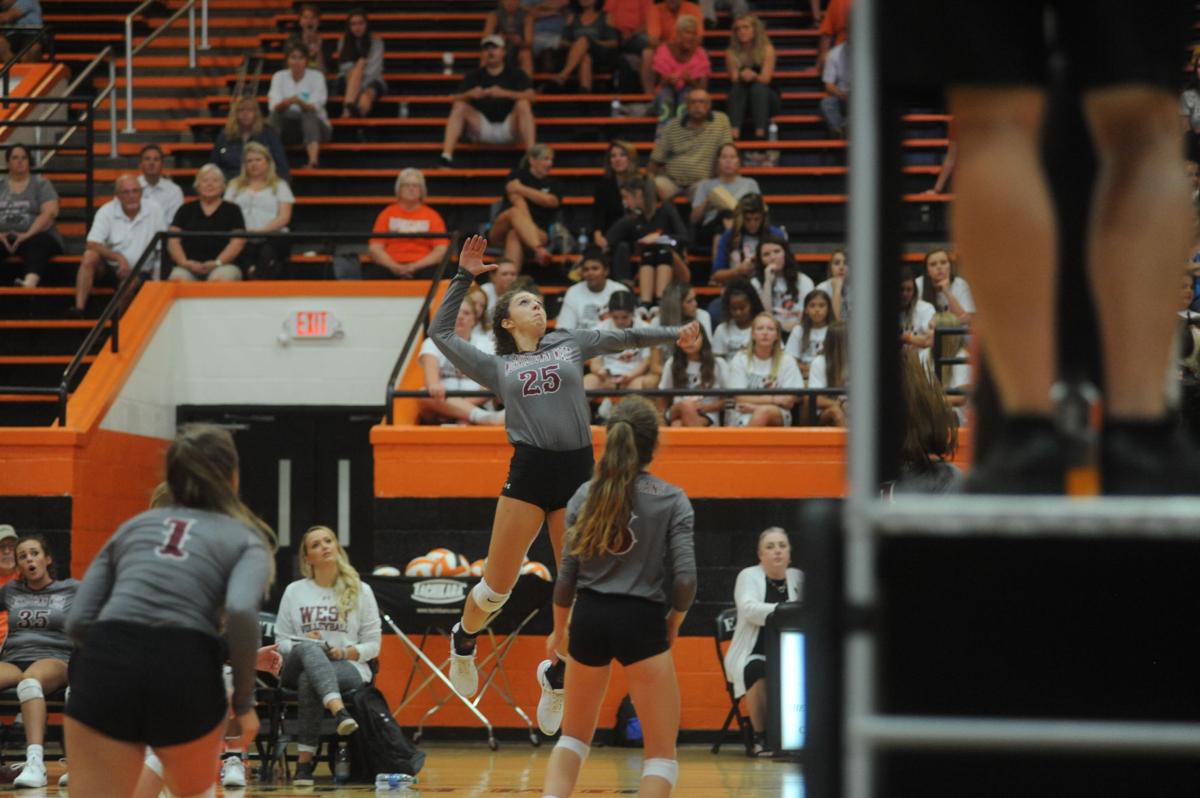 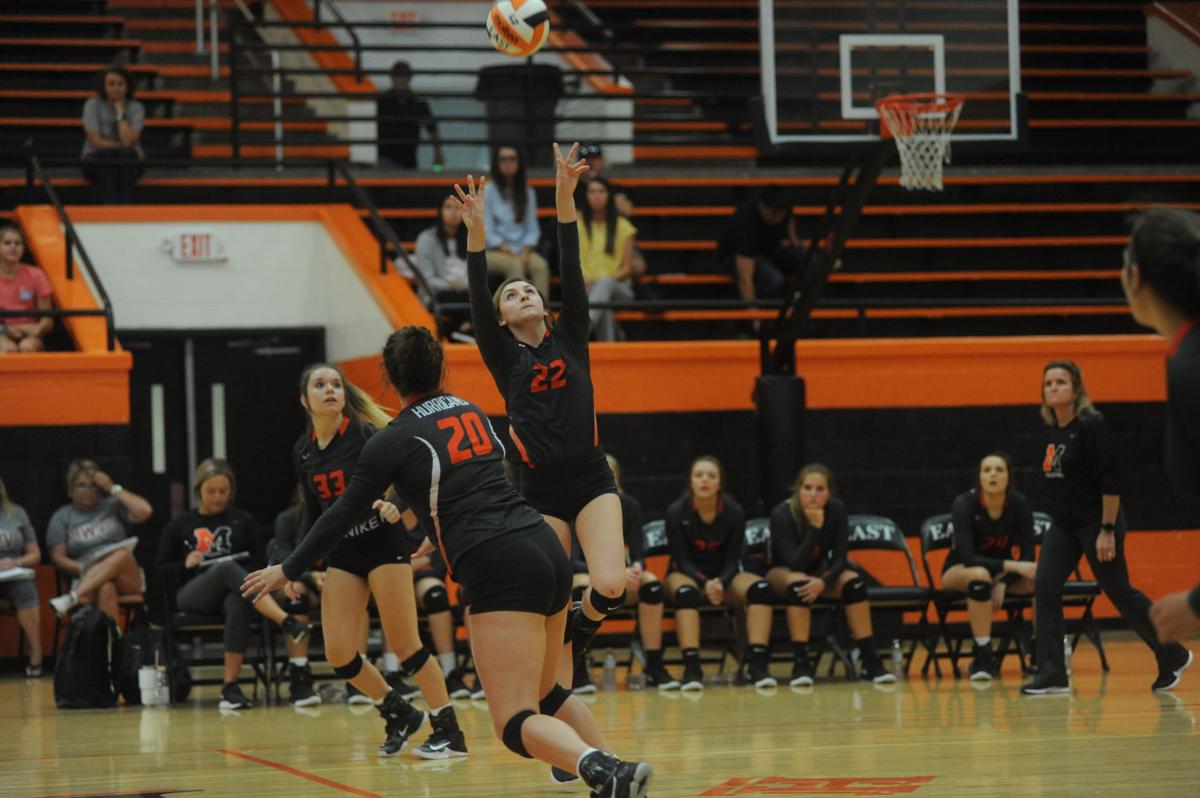 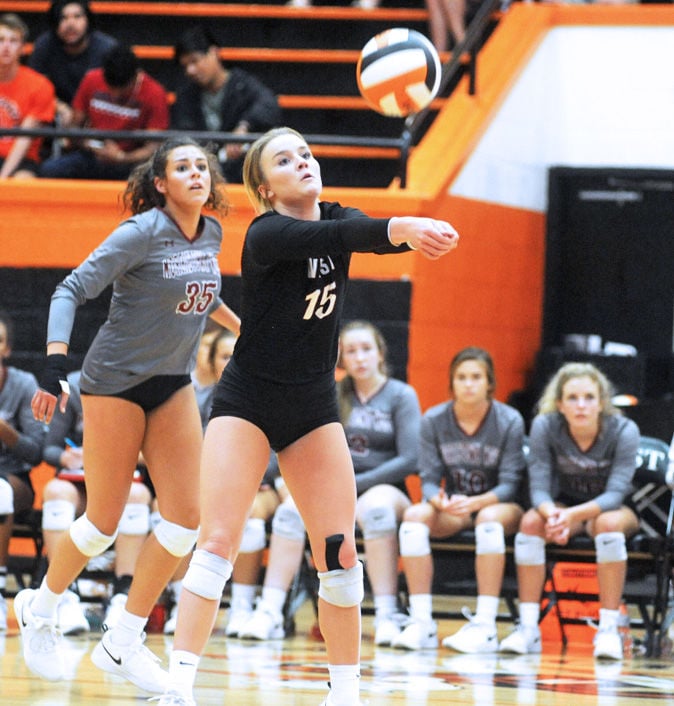 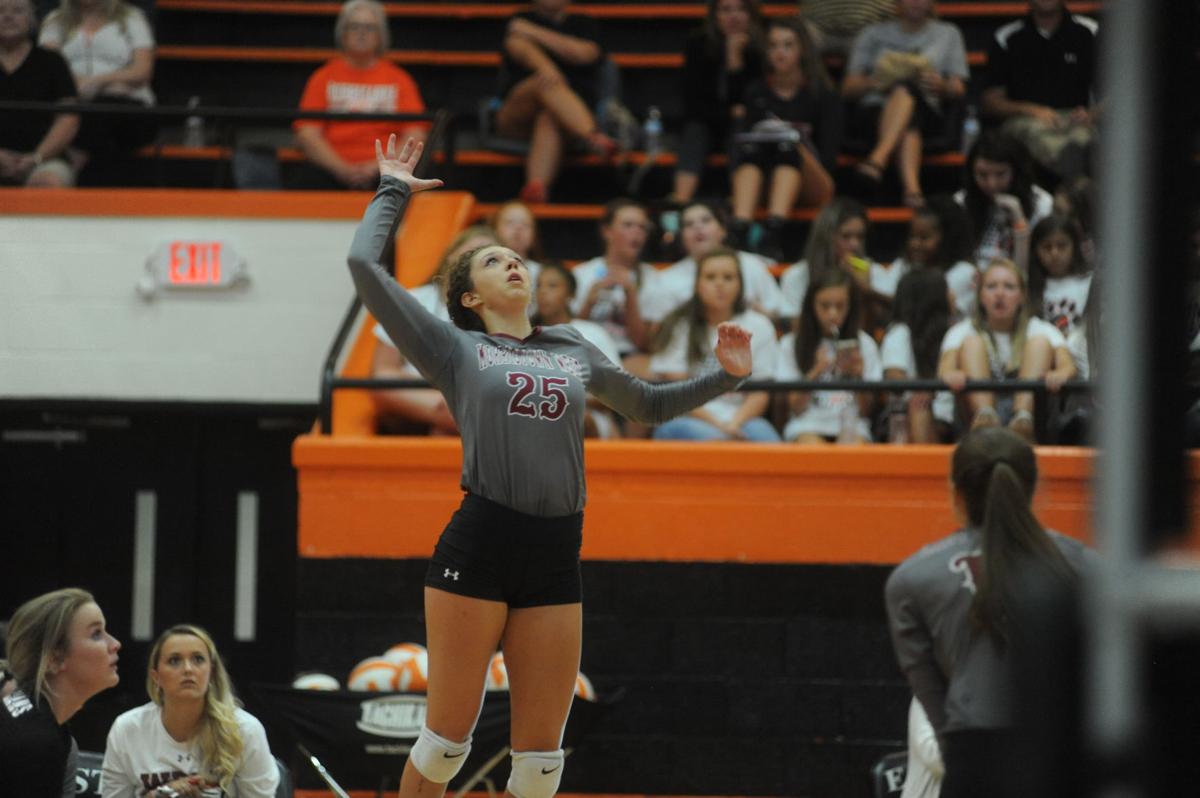 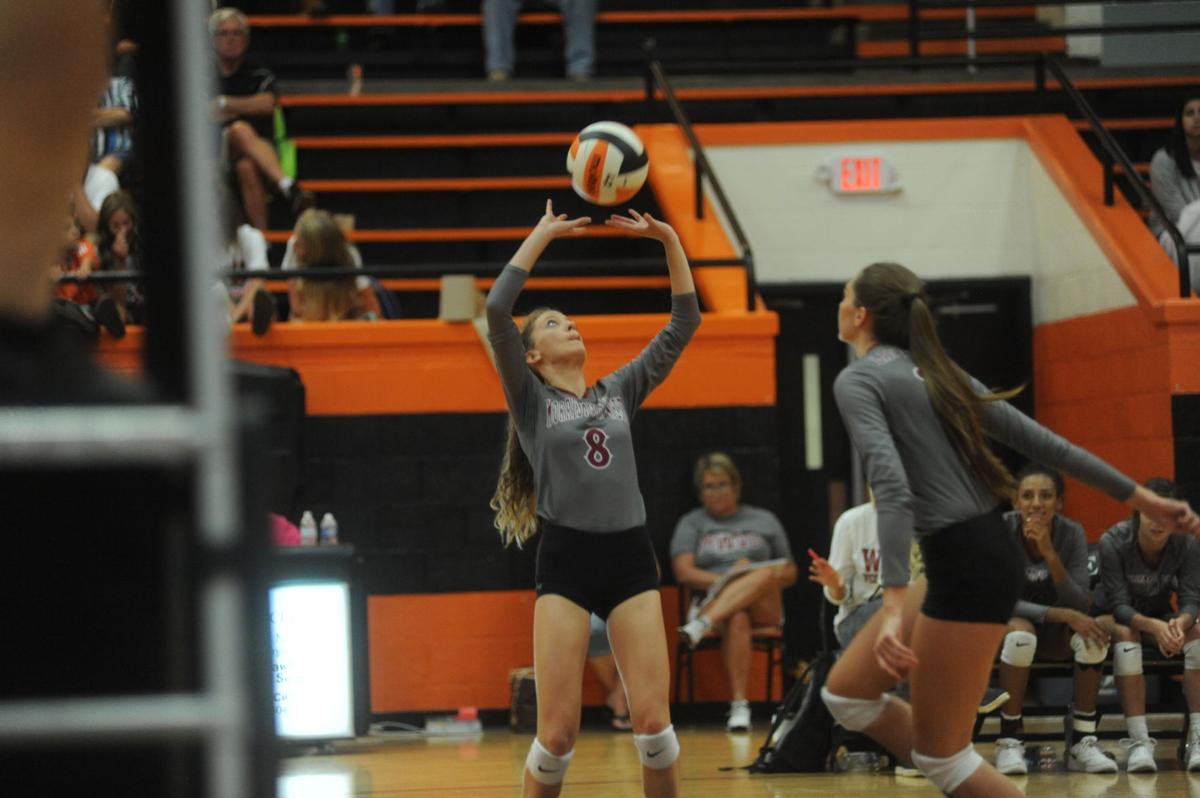 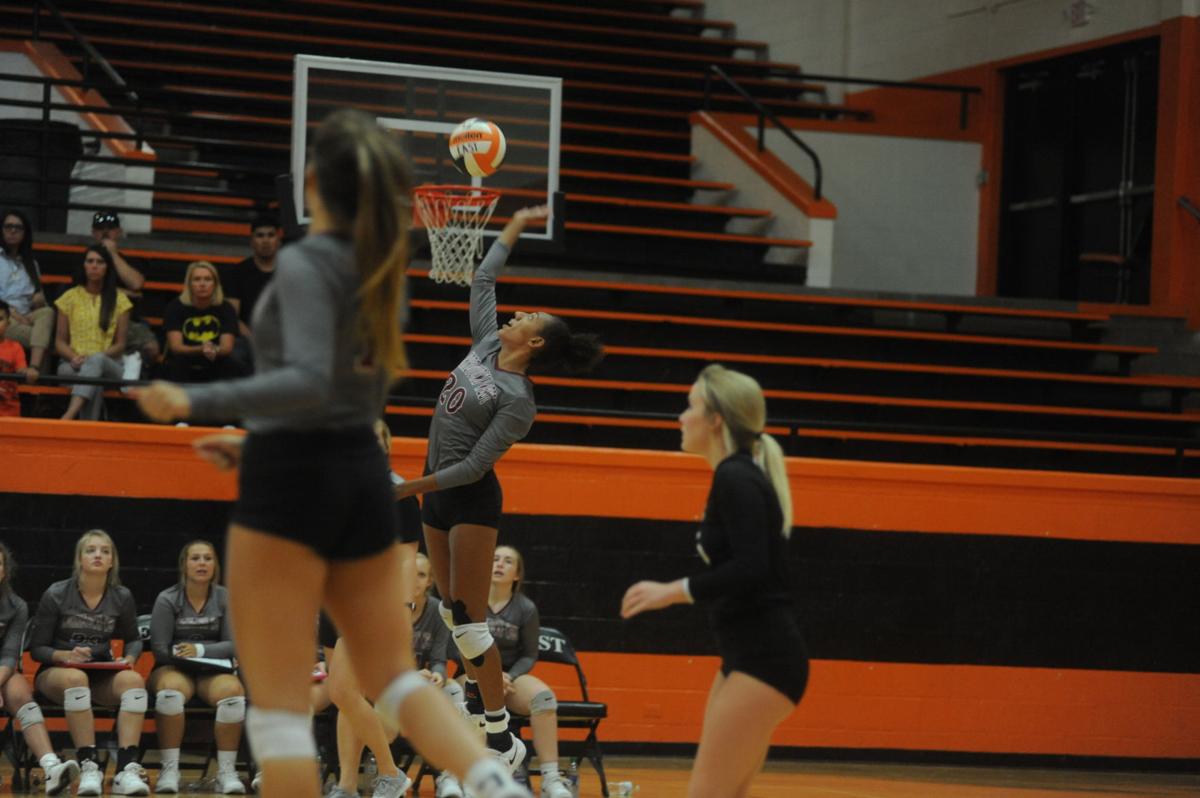 Morristown West rallied from a seven-point deficit to win the first set Tuesday evening at Isenberg-Siler Gymnasium and went on to a 3-0 volleyball victory over cross-town rival Morristown East as Katie Wallin established a new school record for assists in a match.

Wallin had 67 assists as the Lady Trojans remained unbeaten after the first round of play in the Inter Mountain Conference. Wallin had set the record of 61 assists in a victory over Jefferson County earlier in the year.

The Lady Trojans struggled with their serve early and fell behind 9-2 and again at 12-5 before coming from behind to claim a 25-22 opening-set decision.

Coach Natalee Gruse’s club then pulled away with a seven-point burst to take the second game 25-17 and then scored eight of the last 10 points in a 25-15 triumph in the final set.

With the victory, the Lady Trojans are 4-0 in conference play and play at second-place Jefferson County on Thursday afternoon. West is 9-5 for the season.

The Lady Hurricanes slipped to 9-7 overall and are all-even at 2-2 in league play.

Gruse said, “We got off to a very slow start but the girls came back and posted a win that was important to them. We missed five serves in the first set and that has been our Achilles heel this season.

The coach added, “I thought we had several people hit the ball well tonight and Katie did a phenomenal job of setting them. I felt the girls did a good job of adjusting to where the defense was and then hitting open spots.”

“Rebecca had a great game tonight,” Gruse said. “She’s been working on her swing quite a bit and she’s improving each game. I couldn’t have asked for anything better from her tonight.”

Gruse said this is an important stretch for her team. “This is a big week for us with East and Jefferson County both on the schedule. The girls know that and they’ve been working hard.

“We had five days of practice last week and got to regroup from a couple of tough losses and the girls showed improvement tonight. I thought we played well after the start. Overall, we played better and that’s all I can ask of them.”

East coach Holly Drinnon said, “We came out all fired up and played really well. Then a couple of things didn’t go our way and our youth started to show up.

“We’ve got to get back to practice and commit to doing a much better job in serve receive or games like this will keep happening.”

East scored six straight points in the first game as Reese Forester had two kills and Jones added one to grab a quick 7-1 lead. After Simmons scored for West, the Lady Trojans served into the net and were then called for a net violation.

The winners got a kill from Noble and another winner from Simmons to close within 10-5. After a kill sailed long for the Lady Trojans, Irish Dils found an open spot to score and the Lady ‘Canes were in front 12-5.

West roared back as Wallin put a shot in an open spot, Noble and McKenna had kills, East hit the ball out of bounds and then Hodges had a kill and it was 12-11.

Jaci Drinnon and Bell scored for East in a 3-0 run and the teams traded hitting errors leaving East up 16-13. Hodges knocked down a kill and then served an ace. The Lady ‘Canes hit it out of bounds and Noble tied it with a kill.

It was tied again at 18 before Noble’s kill put West in front for good and Long served an ace. West scored four straight for a 24-19 spread but Surber had a kill and served an ace as East fought back within 24-22 before Mattison’s kill ended the set.

In game two, West led 7-3 but East rallied to tie at 9 and again at 14. West led 17-16 when they broke the game open with seven straight points with Long serving. Mattison and Noble had kills in the spree and Long served an ace. A kill by Noble ended it.

The third game was tied five times with the last one coming at 7-7. Hodges then had a kill and Mattison served a pair of aces in a 4-0 run that opened a 14-9 West lead.

East scored twice but Hodges blasted two more kills. East got within 17-13 but West closed it out as Simmons had two kills and Mattison added one with Noble serving an ace for the final point.