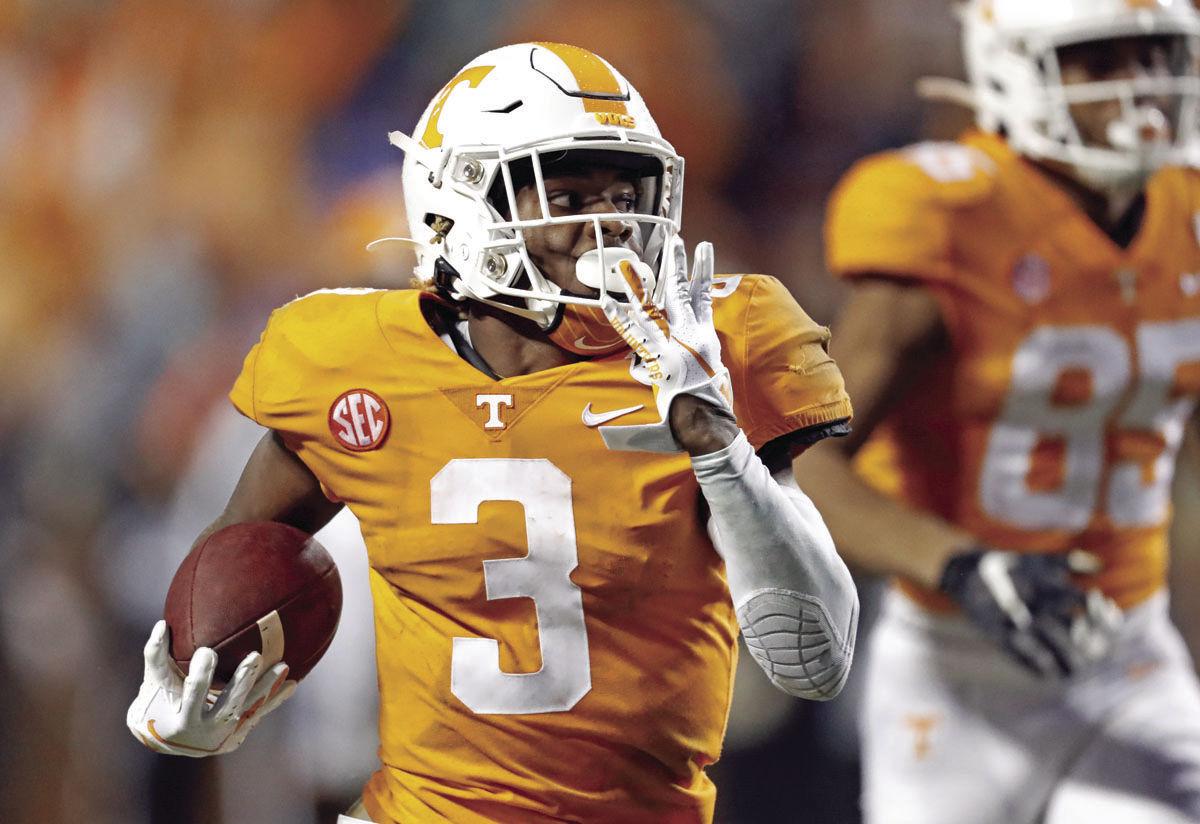 Tennessee running back Eric Gray (3) runs for a 94-yard touchdown in the first half of an NCAA college football game against Vanderbilt Saturday, Nov. 30, 2019, in Knoxville, Tenn. (AP Photo/Wade Payne) 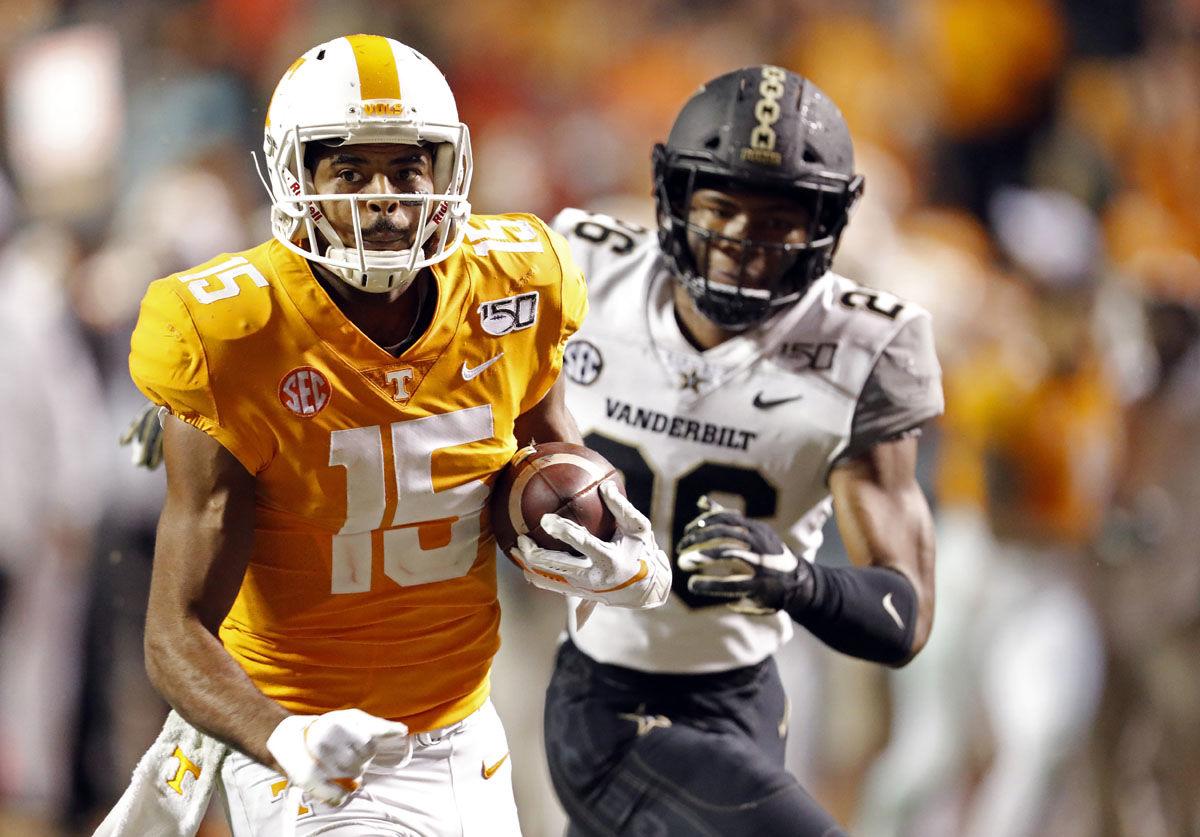 Tennessee running back Eric Gray (3) runs for a 94-yard touchdown in the first half of an NCAA college football game against Vanderbilt Saturday, Nov. 30, 2019, in Knoxville, Tenn. (AP Photo/Wade Payne)

KNOXVILLE – Saturday may have been Senior Day for the Tennessee Volunteers, but it was a freshman who put on a show.

Eric Gray was a one-man wrecking crew as he carried the ball 25 times for 246 yards and three touchdowns as the Vols ended three years of frustration against the Vanderbilt Commodores with a 28-10 rain-soaked, twice-delayed win at Neyland Stadium.

Gray’s performance was the best by a true freshman since Jamal Lewis ran for 232 yards against Georgia in 1997. Gray had 246 of Tennessee’s 297 yards on the ground, and the Vols finished with 417 yards of total offense. One week after lighting up Missouri for 415 passing yards, Jarrett Guarantano was a rather pedestrian 6-of-17 for 120 yards and a touchdown but, with the weather and the way Gray was playing, he didn’t have to carry the Vols like he did in the last several games. Jauan Jennings caught two passes for 56 yards, and Dominick Wood-Anderson had three catches for 45 yards.

The UT defense did its job once more as they held Vandy to only 279 yards of total offense, the fourth game in-a-row the Vols have kept the opposition from getting to the 300-yard mark. Senior Daniel Bituli capped his last game at home with eight tackles to lead the Tennessee defensive effort. Vanderbilt’s longest play from scrimmage on the night was for only 26 yards. With the win, UT improves to 7-5 and finishes third in the SEC East at 5-3. Vanderbilt ends their season at 3-9, 1-7. The Vols will now wait until next Sunday to see where they will be playing in the post-season with the Outback, TaxSlayer, Belk, Liberty and Music City Bowls all in the mix.

“Eric has plenty of ability and a lot of times, it comes to opportunity and you earn those opportunities in practice,” Tennessee head coach Jeremy Pruitt said after the game. “With the way the season went, in the middle of the season, maybe he lost a step because lots of times as a freshman, you can get a little overwhelmed. Over the last couple of weeks, he kind of looked like his old self and had a little more pep in his step and that showed today.

“I can’t say enough about the guys in the locker room, about the effort and toughness and pride they have in this University, how they stayed the course and found a way to finish. I’m excited about that and the future of our program,” Pruitt stated.

Saturday’s game was delayed for 28 minutes because of a rare November thunderstorm that rolled through Knoxville. When Tennessee got the ball, they didn’t keep it for long as Guarantano was picked off by Jaylen Mahoney at the UT 33 yard line. Ryley Guay gave the Commodores a quick 3-0 led when he connected on a 41-yard field goal attempt.

Gray gave the Vols the lead when he broke off a 56-yard yard touchdown run which was his first rushing touchdown of his young career. On Tennessee’s next possession, Guarantano completed an incredible pass as he was scrambling for his life and somehow found Wood-Anderson for a 14-yard pickup and Vandy was penalized on the same play for a late hit out of bounds which moved the ball to the Commodores’ six-yard line. Two plays later, Guarantano and Wood-Anderson hooked up again, this time for a six-yard score. Brent Cimaglia’s point after made it 14-3, Tennessee.

The Memphis sensation was at it again as he ran untouched through a huge hole in the Vandy defense and didn’t stop until he was in the end zone 94 yards later. The play was the second longest touchdown run in school history and gave the Volunteers a 21-3 lead. That was how things stood at the half.

After an uneventful third quarter, Vanderbilt finally found the end zone in the fourth. The Commodores converted a four and four at the Tennessee 29-yard line when Riley Neal picked up nine yards on the quarterback keeper. Later in the drive when they were facing a third down and 12 at the Vols’ 22-yard line, Neal fired in the left corner of the checker boards and Kalija Lipscomb came down with it for the score. Guay’s kick was good to make it 21-10, Tennessee.

The Vols answered on their next possession. Even though they had both been quiet throughout the game, Marquez Calloway and Jennings made their presence known as Guarantano found Calloway for a 19-yard pickup to the UT 49 and then found a wide-open Jennings across the middle who ran 50 yards to the Vandy three yard line. One play later, Gray walked into the end zone for his third score of the contest to push the UT lead to 28-10.

Another lightning delay cleared Neyland Stadium for the second time with 7:38 remaining in the game and ended 39 minutes later. When play resumed, former Sevier County standout came in for Vanderbilt at quarterback. He went 3-for-7 for 30 yards and also ran for 13 yards.