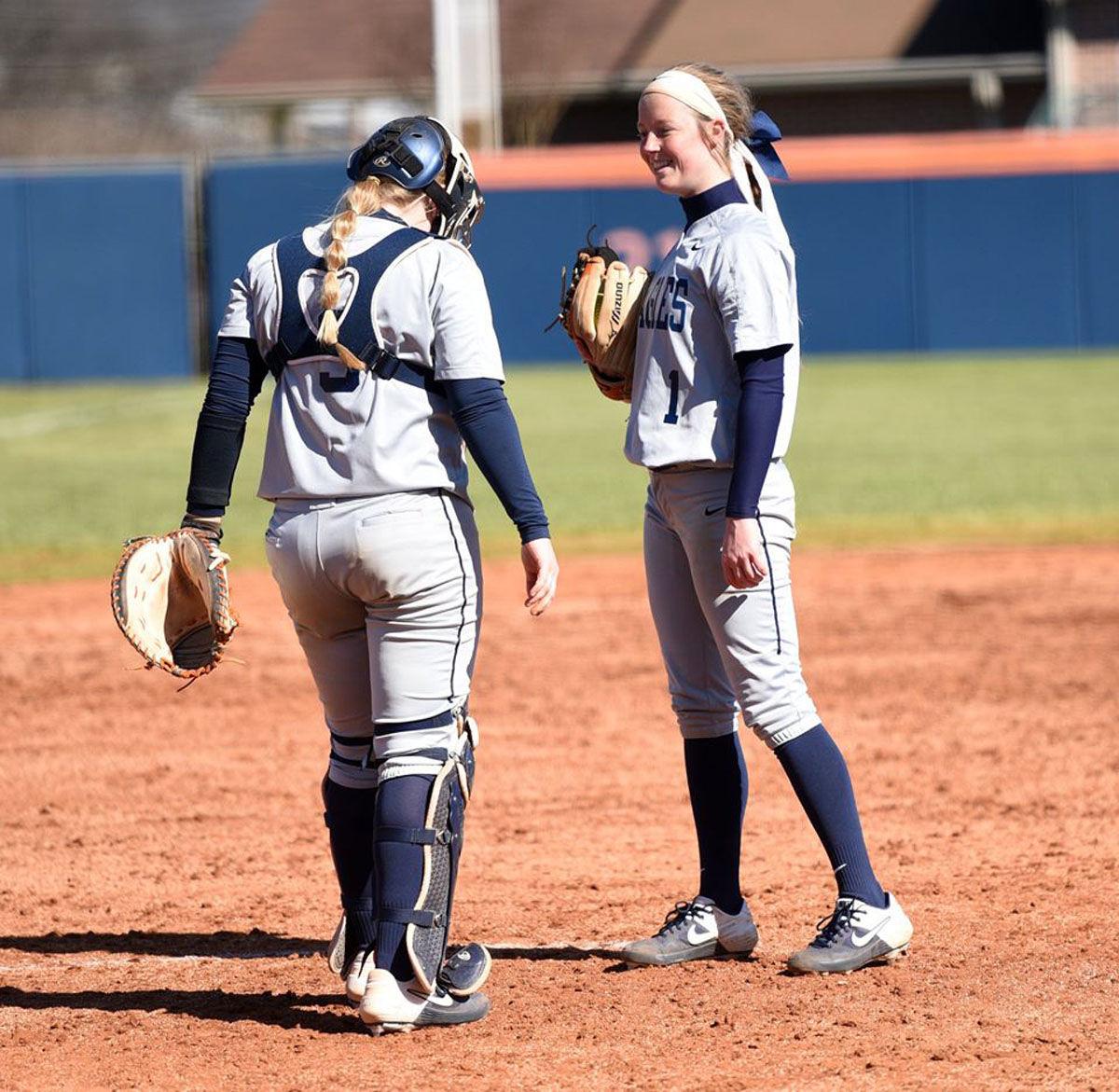 Carson-Newman’s Laci Rinus (1) and KaraLynne Levi (9) meet in the circle before the start of an inning against Mars Hill at Vickee Kazze-Hollifield Softball Complex on March 1. 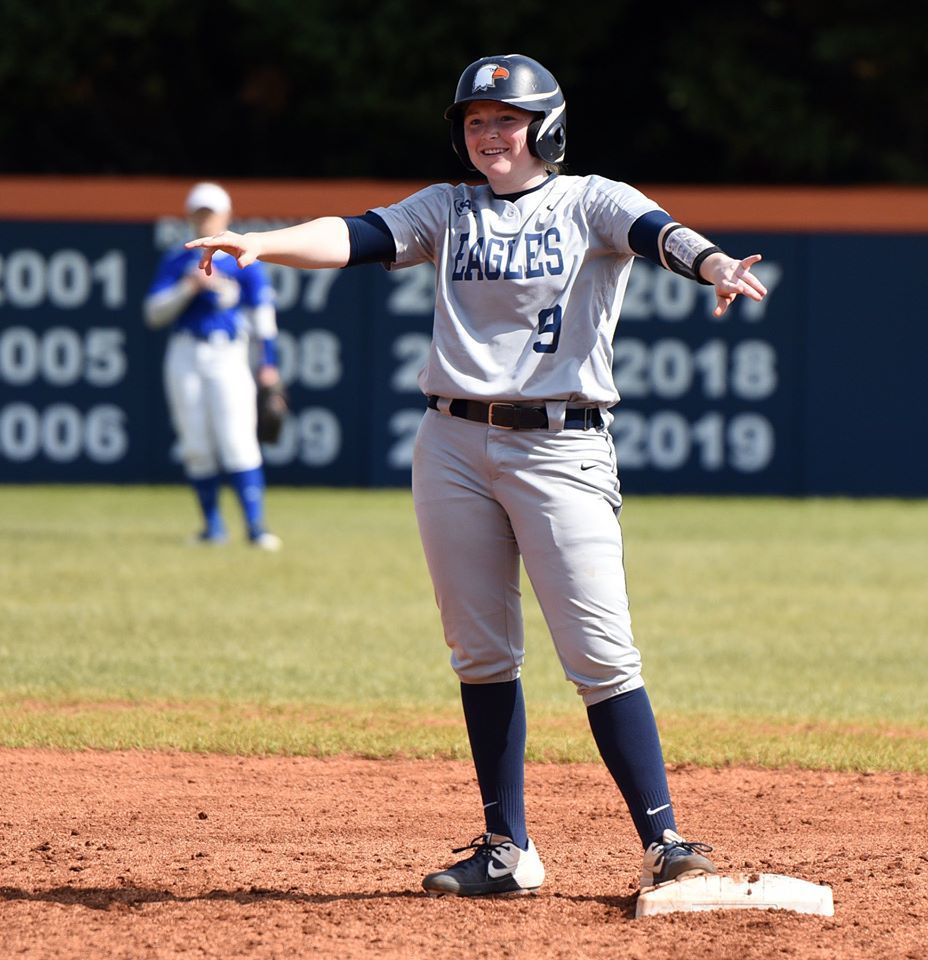 KaraLynne Levi (9) stands on second after a base hit against Mars Hill on March 1.

Carson-Newman’s Laci Rinus (1) and KaraLynne Levi (9) meet in the circle before the start of an inning against Mars Hill at Vickee Kazze-Hollifield Softball Complex on March 1.

KaraLynne Levi (9) stands on second after a base hit against Mars Hill on March 1.

On March 20, the NCAA ruled that Division II springs sports seniors would get an extra year of eligibility after their seasons were cut short by the cancellations due to the COVID-19 global pandemic.

With four departing seniors on the Carson-Newman softball team that had all started since their first games as freshmen, the opportunity to suit back up for an extra year was there. The starting battery of Laci Rinus and KaraLynne Levi decided to make it happen.

For Levi and Rinus, who have played together or against each other since they were in middle school in Murfreesboro, the opportunity to suit up one more season was too good to pass up.

“We’ve been playing together since we were probably 11 or 12,” Levi said. “There’s nobody I know better than Laci. And playing with each other is really fun.”

Rinus, a three-time All-American pitcher, can’t imagine taking the circle without her longtime friend behind the plate.

“I swear that she (Levi) knows where my pitch is going to end up before I release the ball,” Rinus said. “She knows me too well. It’s crazy.”

The chance to return wasn’t a given once the season was cancelled on March 12. Many thought this would be the end of their senior careers and moved on to the next stage of their lives. For C-N’s other 2020 seniors, first baseman Taylor Scott and outfielder Abby Fiessinger, the opportunities presented by their education at Carson-Newman were too good to put off. Scott, who hit .256 with six RBIs in 18 games as a senior is entering Physical Therapy school. Feissinger, who took the 2019 South Atlantic Conference batting title with a .442 average, will begin pursuing her career as an educator.

Levi will use her extra year of eligibility to work toward her Masters of Education. Rinus is targeting a Masters in Counseling.

Rinus and Levi never took the field without their fellow classmates in the line up or in the dugout. To do so in 2021 will be strange.

“Abby’s bat is going to be a major hole to fill and Taylor’s leadership role in the infield will be a lot to replace,” Levis said. “Taylor is one of my best friends, so it kind of stings. She’s doing what she loves, so that makes me feel better about it.”

“I’m going to miss them,” Rinus said. “I consider them my two sisters. It’s definitely going to be different without them, but I know they’ll support us.”

As both Rinus and Levi were graduating seniors, making room on the team and finding the scholarship money to make it happen wasn’t a problem for C-N coach Michael Graves. What it does do is alter his roster plans for 2021 in the best way.

“It will impact our freshmen,” Graves said. “We’re bringing in some great quality players. I expected three or four of them to start. KaraLynne is obviously going to be your catcher and Laci Rinus will be in the line up somewhere. So we’ll have some good quality depth. The younger kids understand the situation. With Laci back, we return our whole pitching staff from this last season, but we have a couple of freshmen coming in that we expect to contribute right away. That helps a lot.”

The entire NCAA softball landscape could be radically different as well. Unlike baseball, there isn’t a profitable professional league out there snatching up players ready to leave programs. With a new talented group of incoming freshman and a platoon of gifted, returning fifth-year seniors, college softball could field some super teams.

“Your talent level has gone up tremendously in what teams can possibly return,” Graves said. “I thought we were pretty good offensively last year. I’m really excited about what we’re bringing back.

“It’s going to be hard to replace Abby and Taylor, but we have players that will help.”

That freshman group will be hungry after they saw their senior years cut short with no chance of getting them salvaged. It’s an experience in which Rinus and Levi can relate.

“We can definitely share those heartbreaking experiences together,” Rinus said. “As fifth-year seniors now, we’re going to push them to be the best they can be. Everybody will push each other. I never thought I’d still be playing softball at 23.

“I have a lot to look forward to and I’m very excited.”