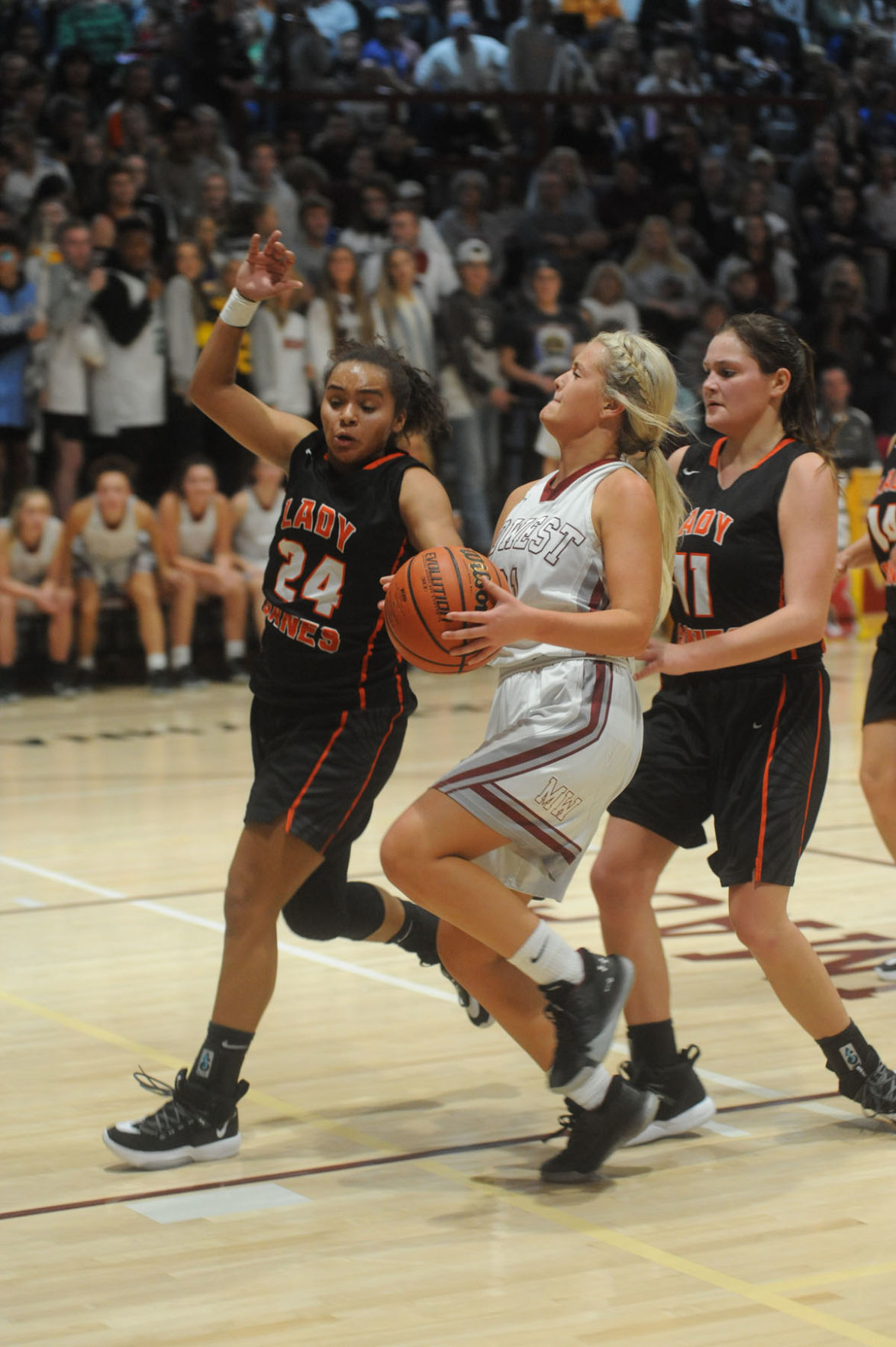 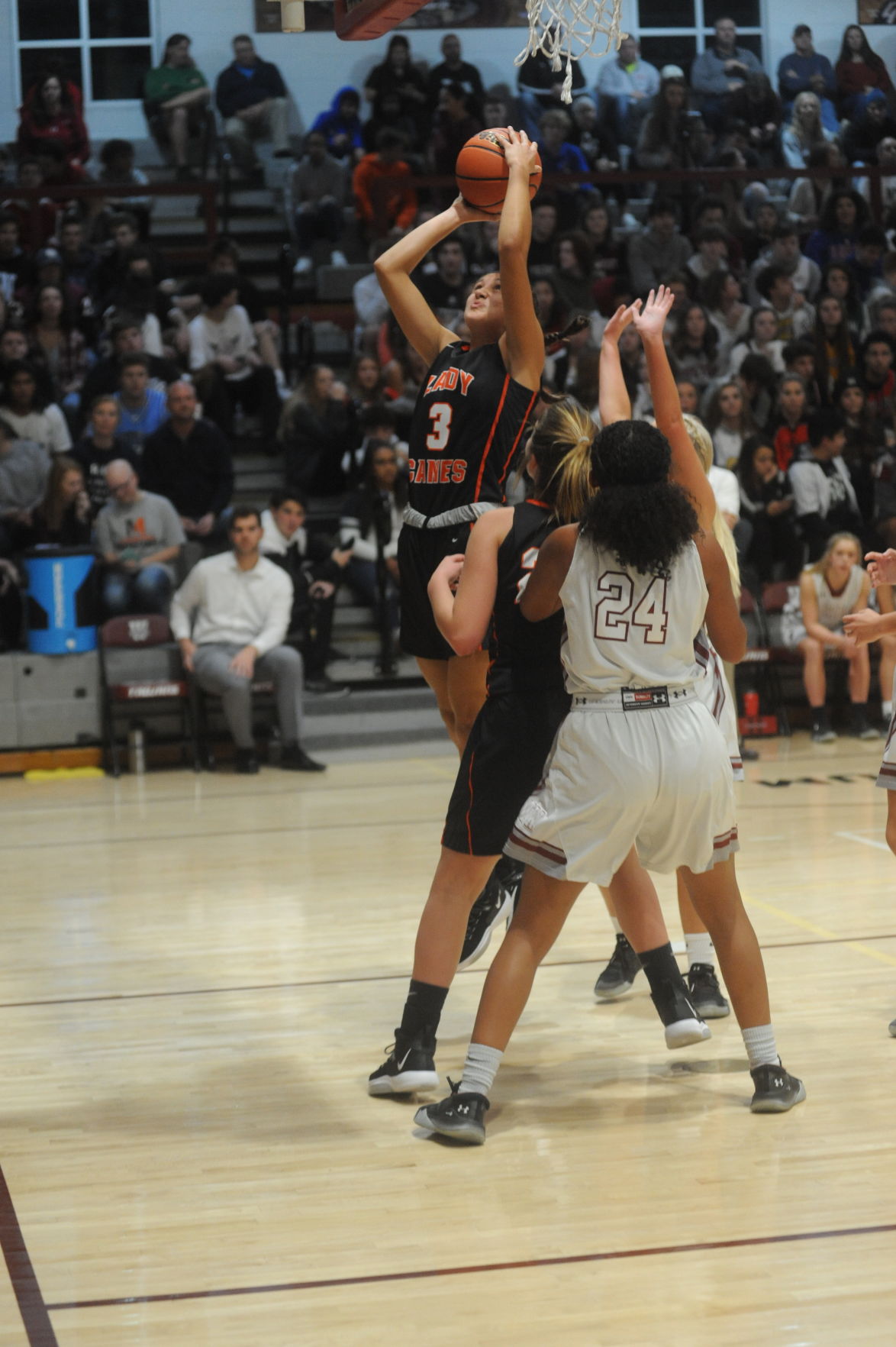 Morristown East’s Sable Burnside goes in for a layup against Morristown West. 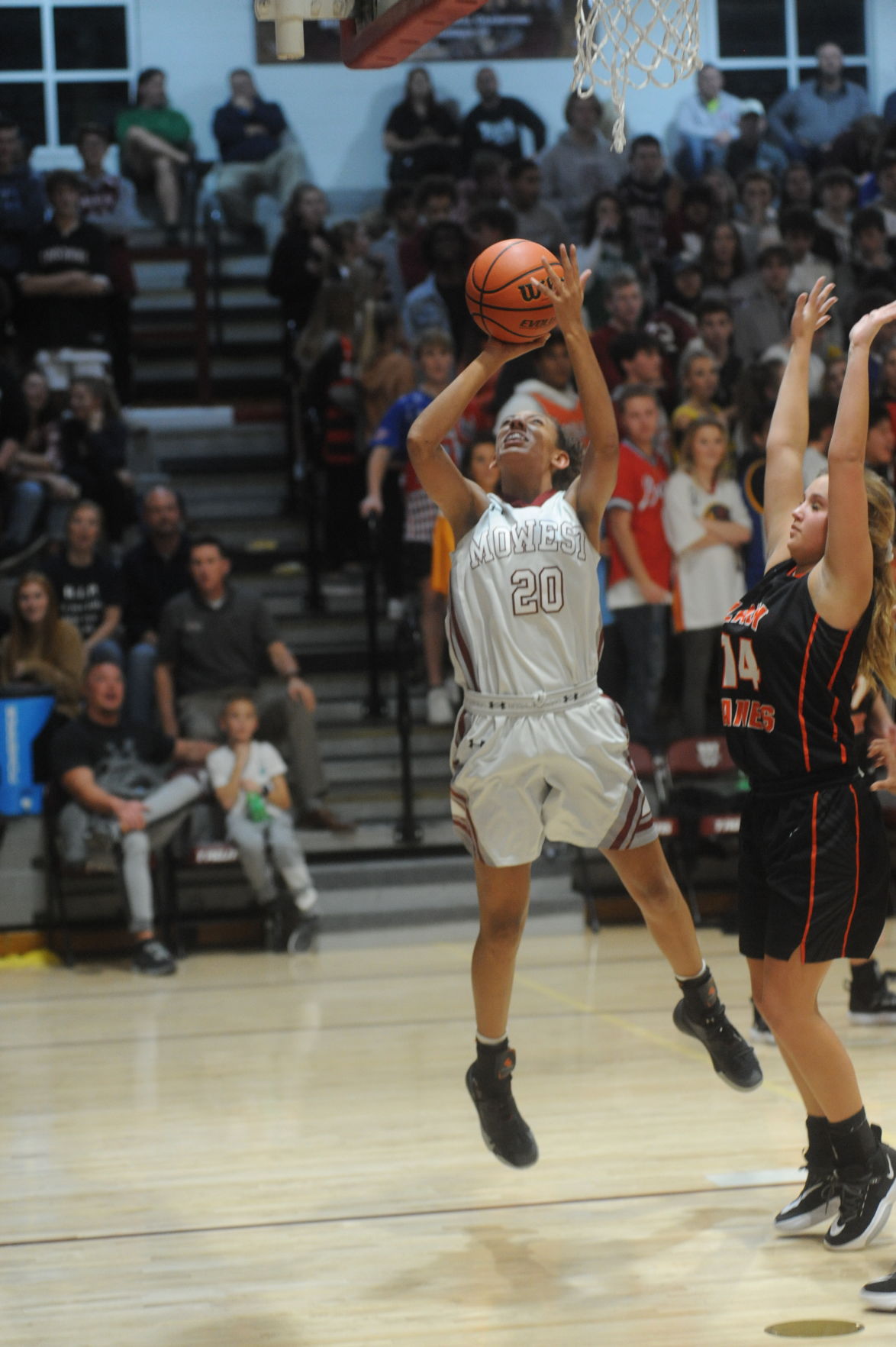 Morristown East’s Sable Burnside goes in for a layup against Morristown West.

It was the 20th consecutive win in the series for coach Johnny Galyon’s Lady Trojans and improved their record to 5-1 for the season. It was their Inter Mountain Conference opener.

The Lady ‘Canes, who haven’t won against West since a two-point win in January of 2012, put up quite a fight, but fell to 4-4 for the season and 0-2 in league play.

Devasia Kyle, who led East with 13 points, put the Lady Hurricanes in front by knocking down a three-pointer for a 33-32 edge with 2:57 on the clock.

However, the Lady Trojans’ Nina Lovelace answered with a triple 10 seconds later for what turned out to be the winning basket.

East’s Finley Surber hit a free throw with 2:32 remaining and that proved to be the final point of the night.

West controlled the clock, but missed the front end of a one-plus-one with 11 seconds left. East rebounded and got the ball to front court and took a time out with 7.8 on the clock.

The Lady ‘Canes got the ball to Sable Burnside, who got up a good shot that bounced off the rim. Kyle managed to get the ball back in the air but it wouldn’t fall as the horn sounded to end the second-lowest scoring game between the two since 2000.

It was a battle from start to finish. Neither team shot the ball well but both played great defense and the battle was close and intense.

Surber put in eight for East but no other player scored more than four.

Galyon said, “It was a tough game. Give East a lot of credit, I think they came over here and produced a fight. We’ve been playing pretty well leading up to this game, but didn’t shoot the ball well tonight even though most of the shots we missed were good shots.

“Lexi and Nina got some baskets taking the ball to the goal in the second half and that really helped.

“But again give East a lot of credit, they came to play tonight,” he said. “East is big and strong and they’re going to challenge people.

“I don’t think either team was pretty to watch but it was a great game,” he closed. “But we’ll take the ‘W’ and go back to work to get better.”

It might not have been pretty but it was exciting even though the two teams combined to make only 20-of-77 shots. West won it making 10-of-40 for 25 percent. The Lady Trojans made only 4-of-24 three-pointers while East was 2-of-12.

The Lady ‘Canes controlled the boards, 38-25, as Kyle had nine to lead the way. Burnside added six and Reese Forester five. Kendall Mattison had seven for West.

East’s Michael Potts said, “It was a tough game for us to lose because I was really proud of our effort tonight. We had a chance to win at the end but the ball wouldn’t go in for us.

“But I told the girls after the game, missing that last shot wasn’t what lost the game. In a one-point game, it was every shot we didn’t make and it was every missed free throw. We got what we wanted on the last play, we just didn’t score.”

He added, “But I was so proud of the way we played and the way we battled tonight. We didn’t play very well on Tuesday, but I thought our effort tonight was much, much better. The girls gave it everything they had. I just hate to see them lose.

“But West is a good team and their coaching staff does a good job. They played really hard, too. It may not have been a heavyweight match, but the kids played it like it was. I thought every kid on both teams did their best even if there were turnovers and missed shots and all. It wasn’t because of a lack of effort.”

It was close from start to finish as neither team led by more than five points the entire game.

East scored the last seven points of the first quarter to lead by 9-4. But the Lady Trojans got a basket from Howard, a pair of free throws from Ewing, a three-point play from Lovelace and two charity tosses by Alexis Brown to start the second quarter for their biggest lead at 14-9.

Kierstin Bell hit a free throw and Surber added another for the Lady ‘Canes to get the margin down to three at halftime.

Kyle scored the first bucket of the third before Ewing scored inside for West. East got a free throw from Bell, two from Burnside and a layup by Megan Winstead to grab an 18-16 lead with 5:13 left in the period.

It see-sawed back and forth as Seals popped in a three-pointer and Howard made a free throw. Surber made two straight baskets and the Lady ‘Canes were back ahead 22-20.

Lovelace made a free throw but Forester scored inside to give East a 24-21 advantage. But Howard took the ball to the hoop and scored. Seals gunned in another three-pointer and the Lady Trojans went on to lead 28-25 at the final rest stop.

Kyle started the fourth with a triple to tie it again, but Howard made two free tosses and Lovelace drove for a basket putting West in front 32-28 with 4:53 left.

Kyle drove to score and then made the three that put East in the lead for the last time.