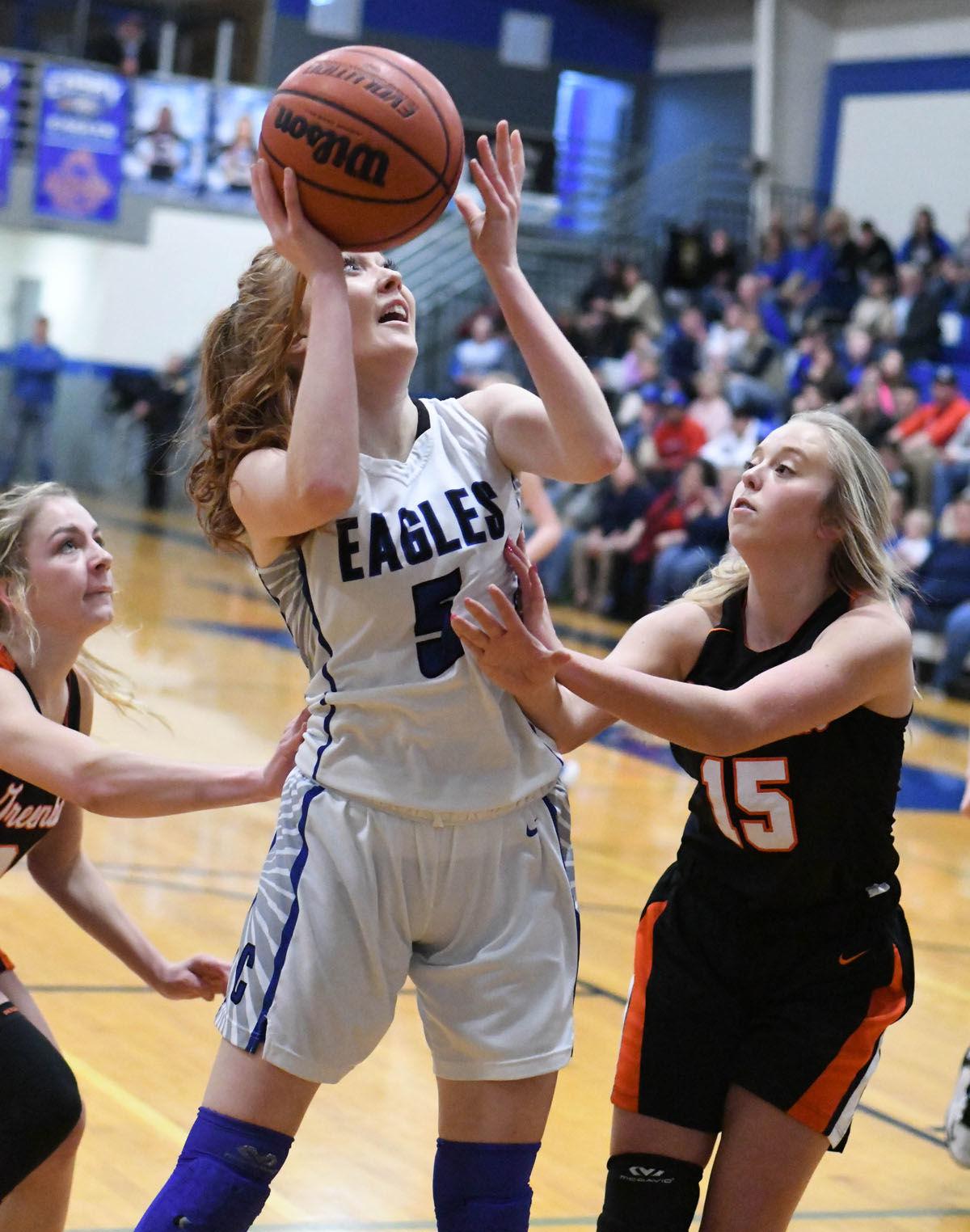 Cosby’s Gracie Johnson (5) splits two Greenback defenders on her way to the basket Monday night in the District 2-A Championship game at Cosby High School. 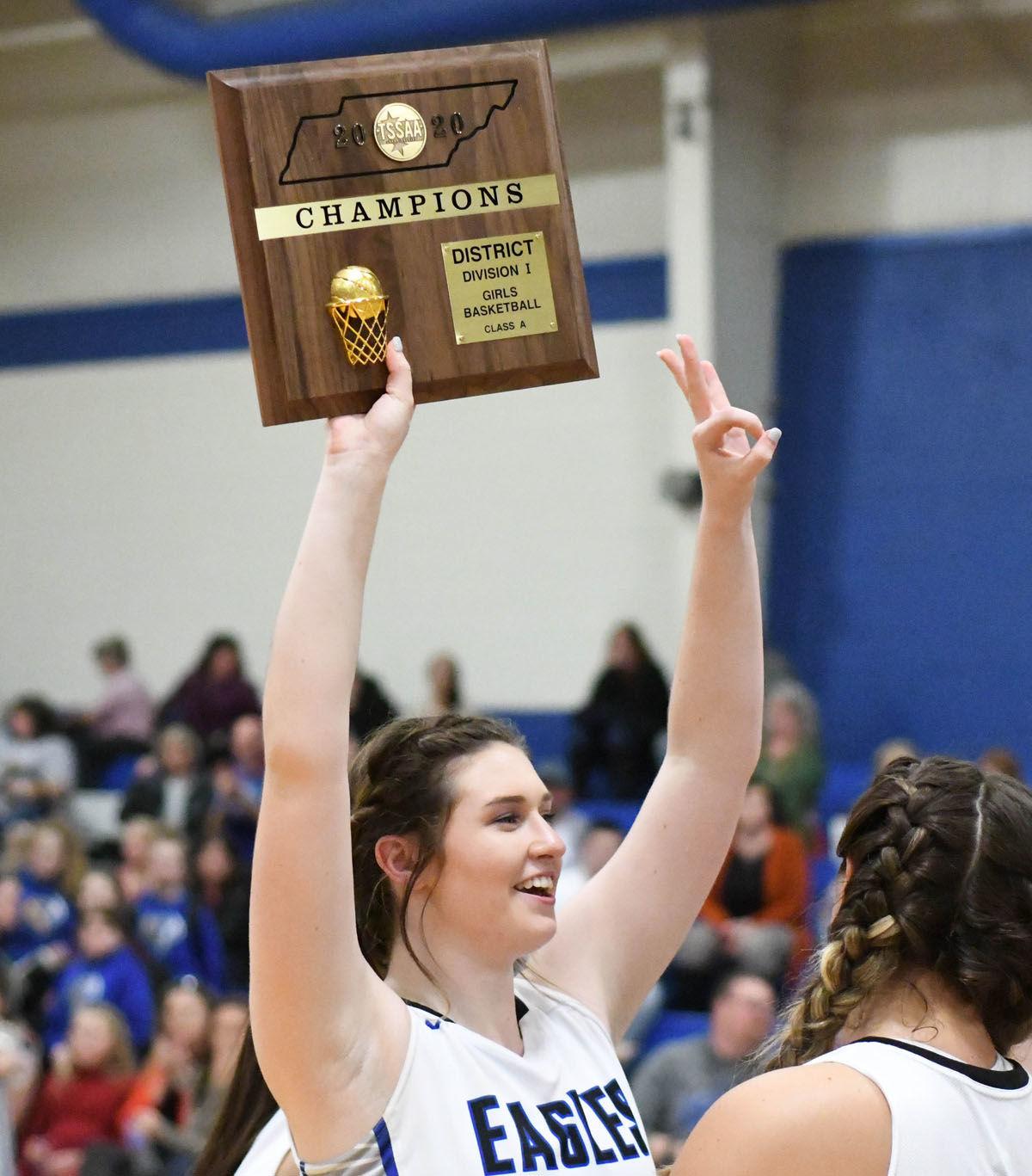 Cosby’s Gracie Johnson (5) splits two Greenback defenders on her way to the basket Monday night in the District 2-A Championship game at Cosby High School.

And in spite of that, Cosby High School still sold a lot of tickets in the process. Behind a tenacious defensive effort No. 1 Cosby earned a 68-45 win over No. 2 Greenback in the District 2-A Championship game on its home floor Monday evening.

The title win reestablishes a trend of dominance over District 2-A foes for Cosby, which won its third straight league title and has won 10 of the 13 possible league championships since the 2007-08 campaign.

After a two-year hiatus of claiming hardware, the Lady Eagles have not lost a district game under the guidance of third-year coach Cody Lowe.

Lowe was quick to credit his team’s defensive play throughout the game, especially with some of his biggest offensive weapons on the bench for most if the first half.

Greenback was held to just three field goals over a 14:08 span until the end of the third quarter, which enabled Cosby to turn a 24-24 stalemate into a 20-point lead in the opening seconds of the fourth quarter.

“I told the girls (Greenback) would come out ready to play,” Lowe said. “They scored 24 early. We got their best shot and I knew we would. But we punched them back and played hard.

“That run in the second quarter was huge,” said Lowe. “We really got after them and turned it up and turned up the pressure and started turning them over and made some shots.”

At the center of Cosby’s pivotal run, which turned the game into a double-digit lead the rest of the night, was junior guard Gracie Myers. In the spotlight after her 20-point night in Friday’s semifinal win over Hancock County, her defensive work and second quarter steals came up big in Monday’s title tilt.

“We just talked about stepping up,” said Myers, who had 13 points and was named tournament MVP for her efforts. “We knew we had to get in their shorts and get some steals to get us going.”

It was all about getting comfortable for Cosby, which withstood some early adversity early on. Junior All-State point guard Bralyn McGaha picked up two first quarter fouls and the Lady Cherokees bounced back from an early 8-2 hole to take a first quarter lead.

Greenback (11-15) took advantage of the offensive glass and the early foul trouble to take its initial lead of the night and had high hopes after it had played the Lady Eagles close twice in their regular season meetings.

“We faced some real adversity tonight,” Lowe said. “Bralyn had the two early fouls, but you can’t say enough about Gracie’s tournament. She had 20 in the semifinals and ran the point tonight.”

Also coming up big off the bench were Gracie Johnson and Tessa McGaha. Johnson knocked down a pair of 3-pointers to help her earn All-Tournament accolades, while McGaha plugged a big gap in the Lady Eagles’ post and kept Greenback from crashing the offensive glass.”

“It was a total team effort tonight,” Lowe said. “Everyone played well. I’m so proud of our bench for coming ready to play and playing hard all night.”

Taking a 12-point lead into the locker room, Cosby came out and continued its control of the game in the first four minutes of the second half, which Lowe considers key in all games.

Greenback struck first to cut the gap to 39-29, but back-to-back buckets by Johnson got the lead back to 15. Despite going without a field goal for seven minutes in the second half, Cosby’s lead never dipped below 15 points the rest of the night, thanks in part to its strong defensive effort.

“We got on them in the second half and put the game away,” Lowe said.

Cosby will host Hampton in a Region 1-A Quarterfinal game on Friday at 7 p.m. Other quarterfinal matchups include Cloudland hosting Washburn, Hancock County going to North Greene and Greenback hosting Unaka.

The semifinals and finals of the event will be hosted at Walters State Community College.