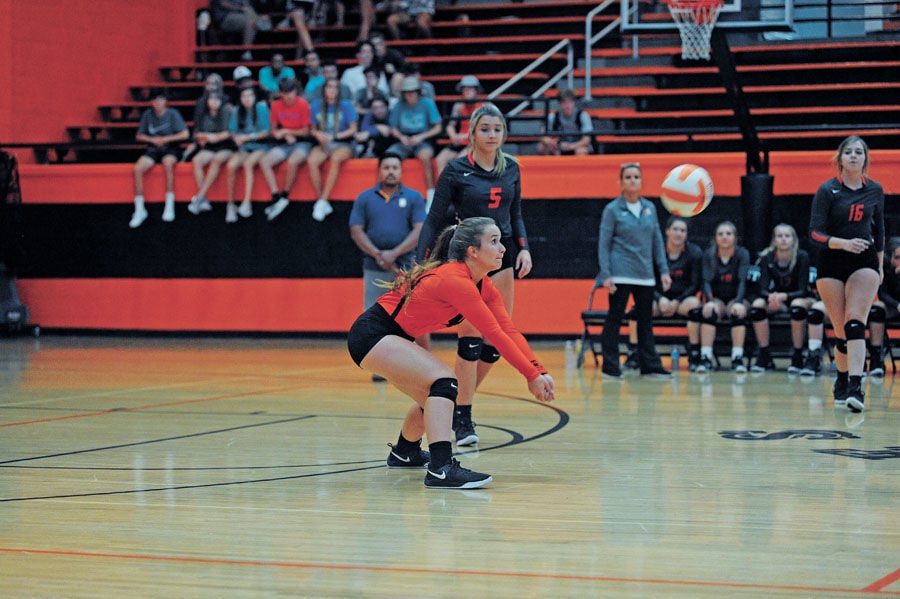 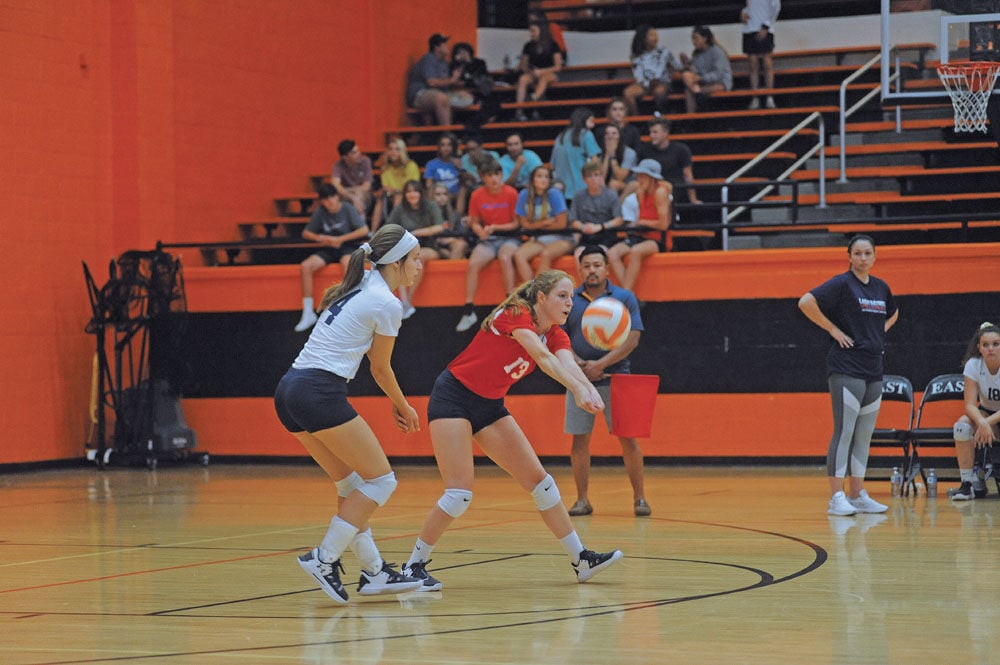 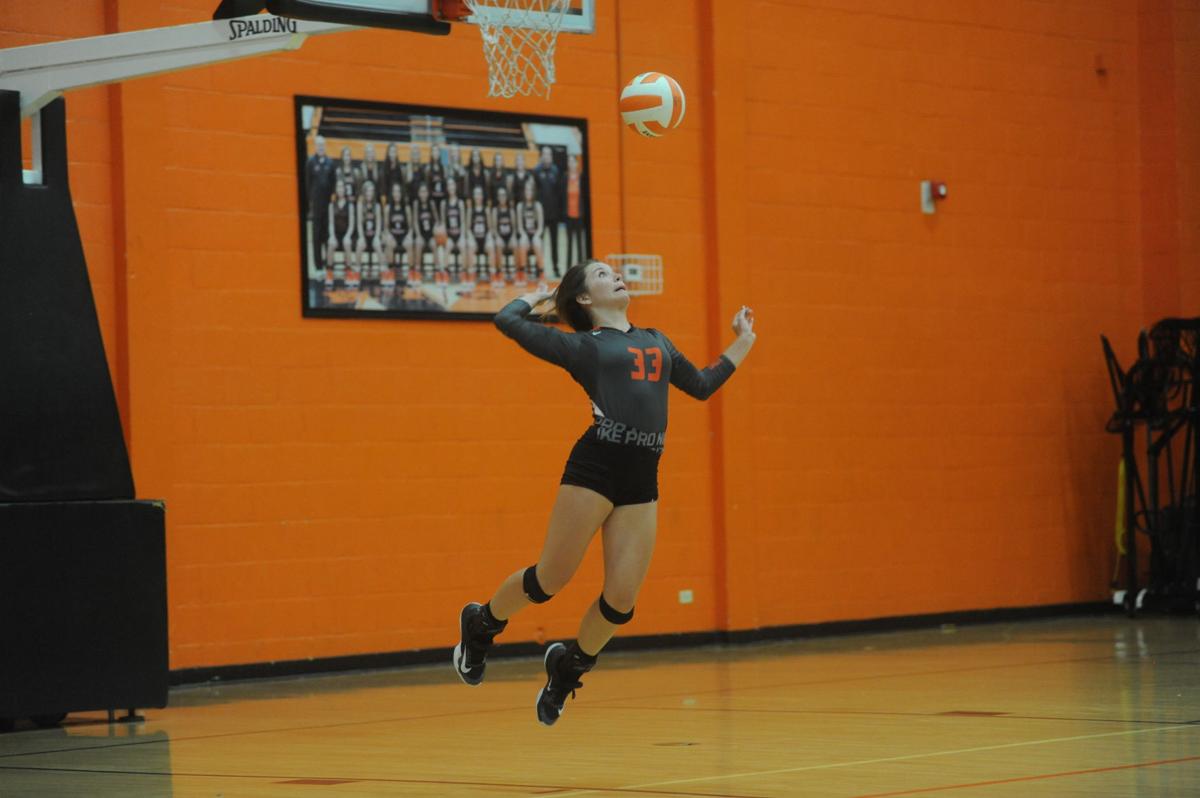 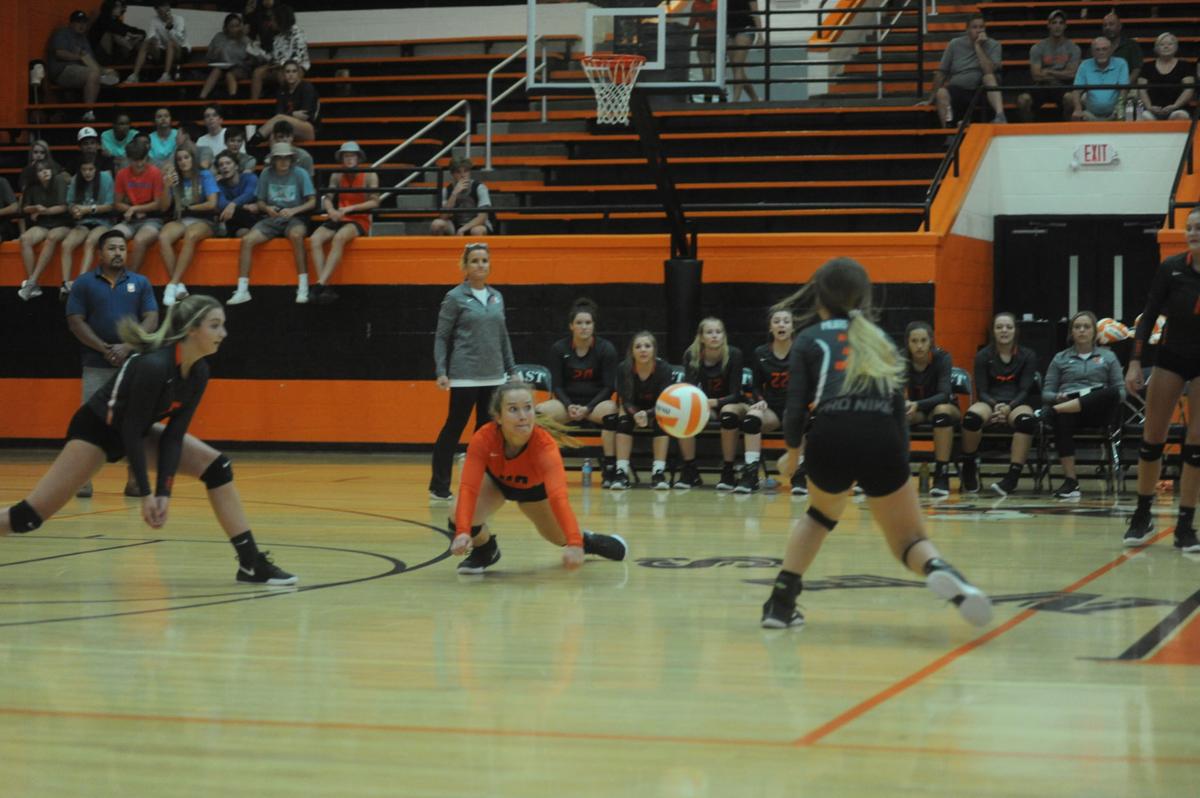 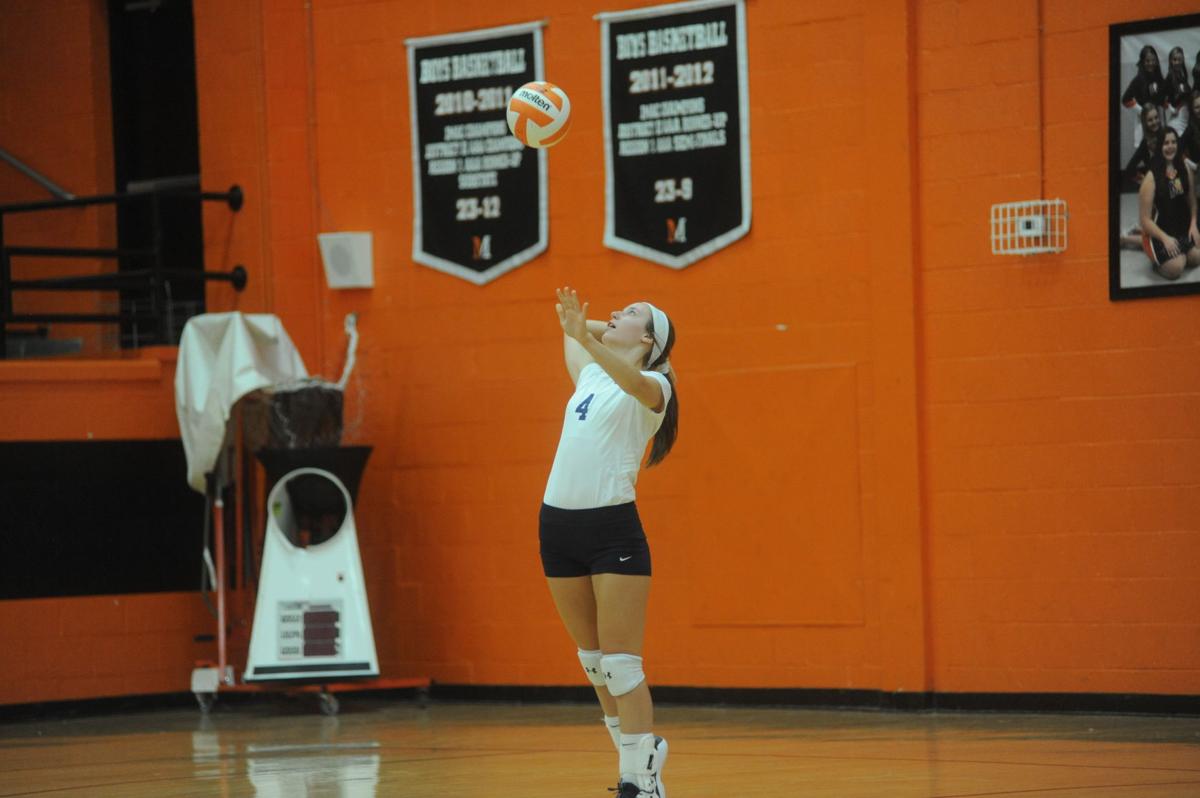 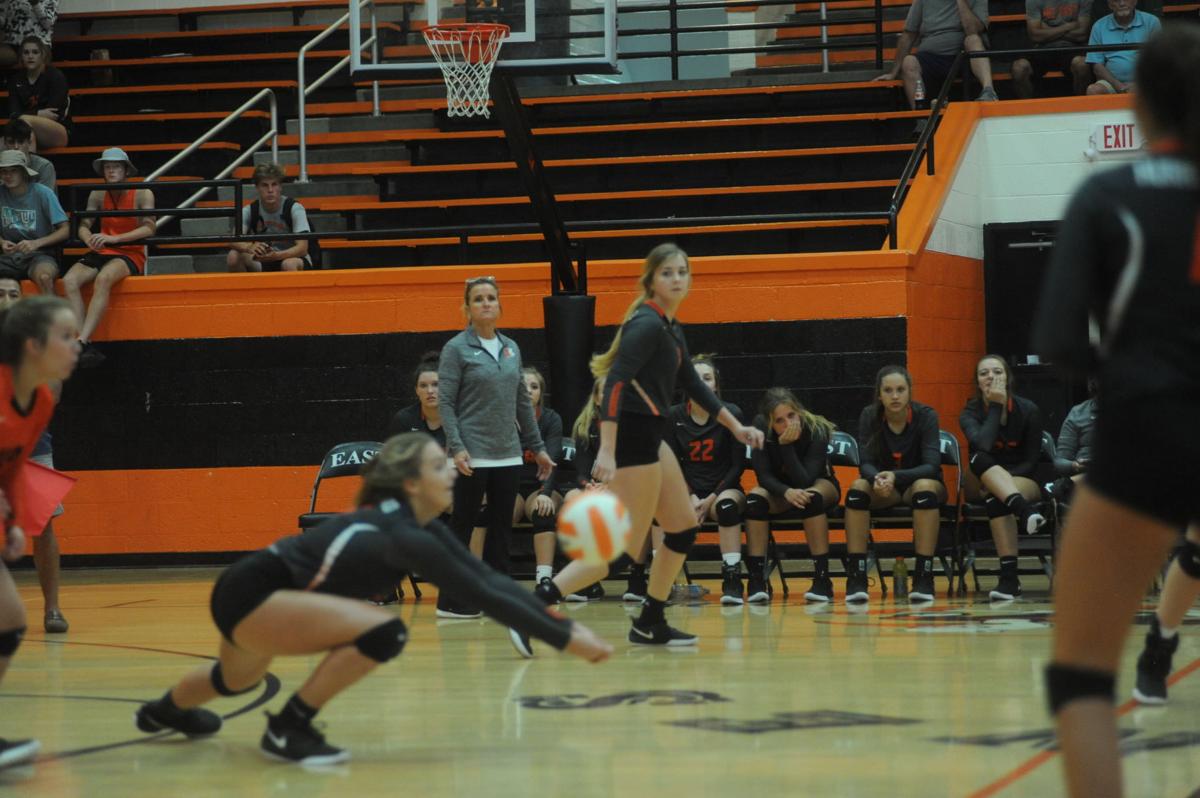 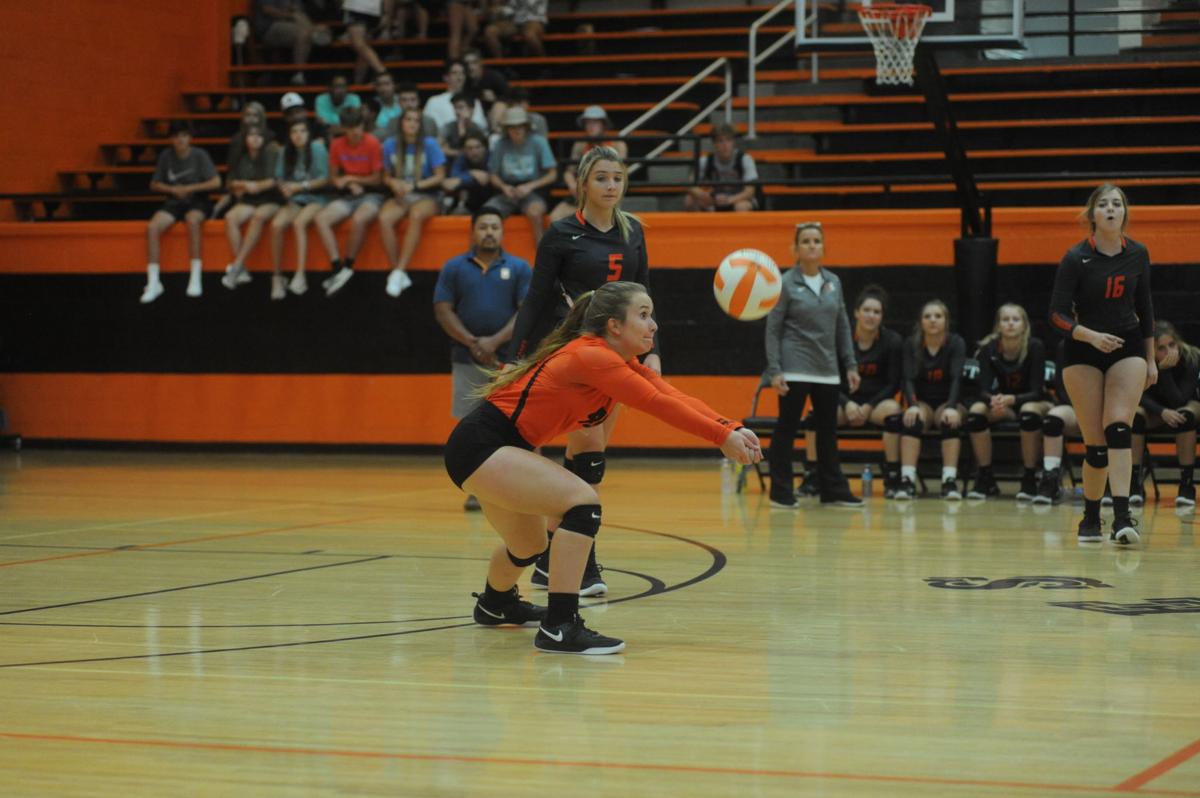 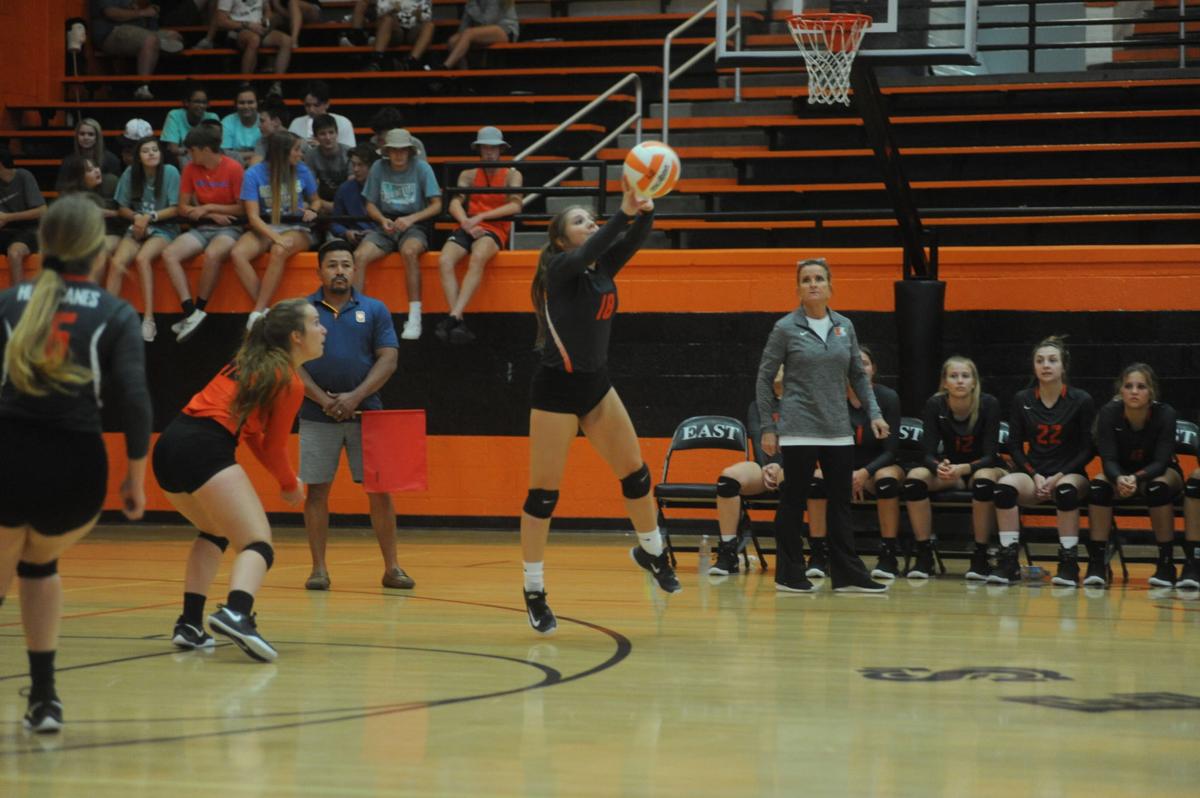 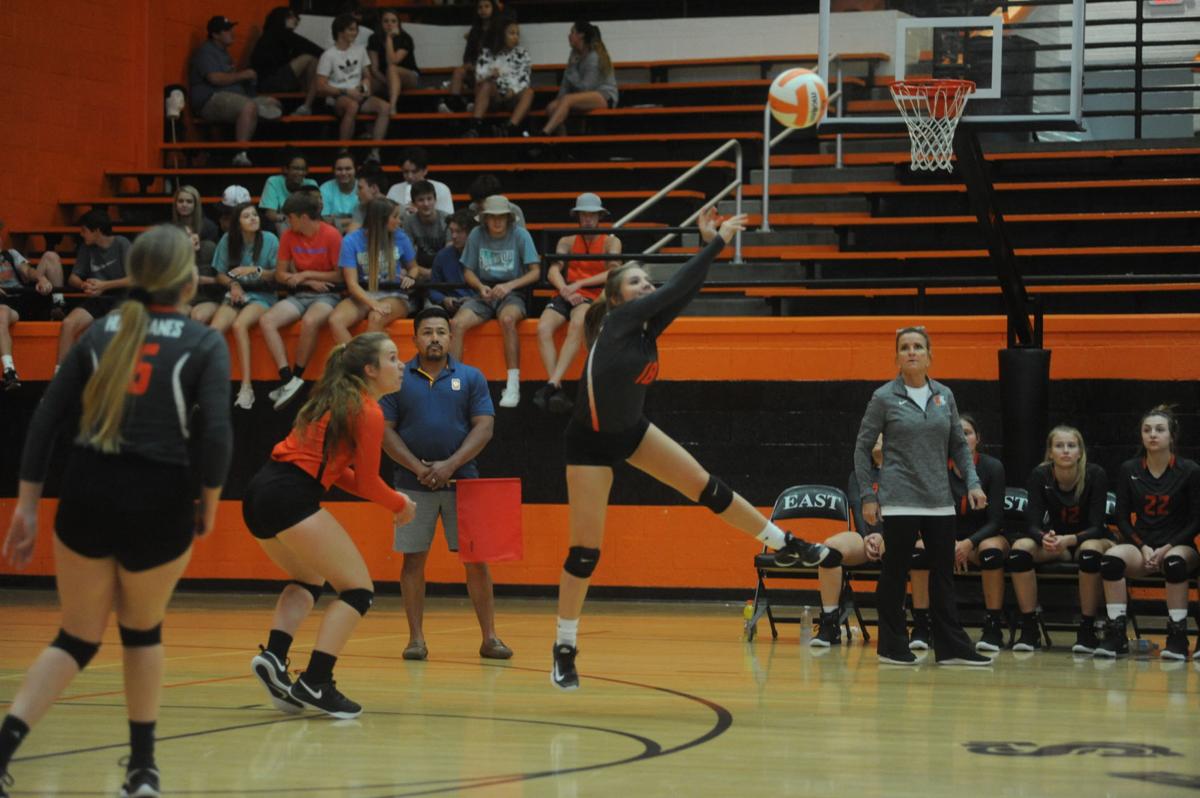 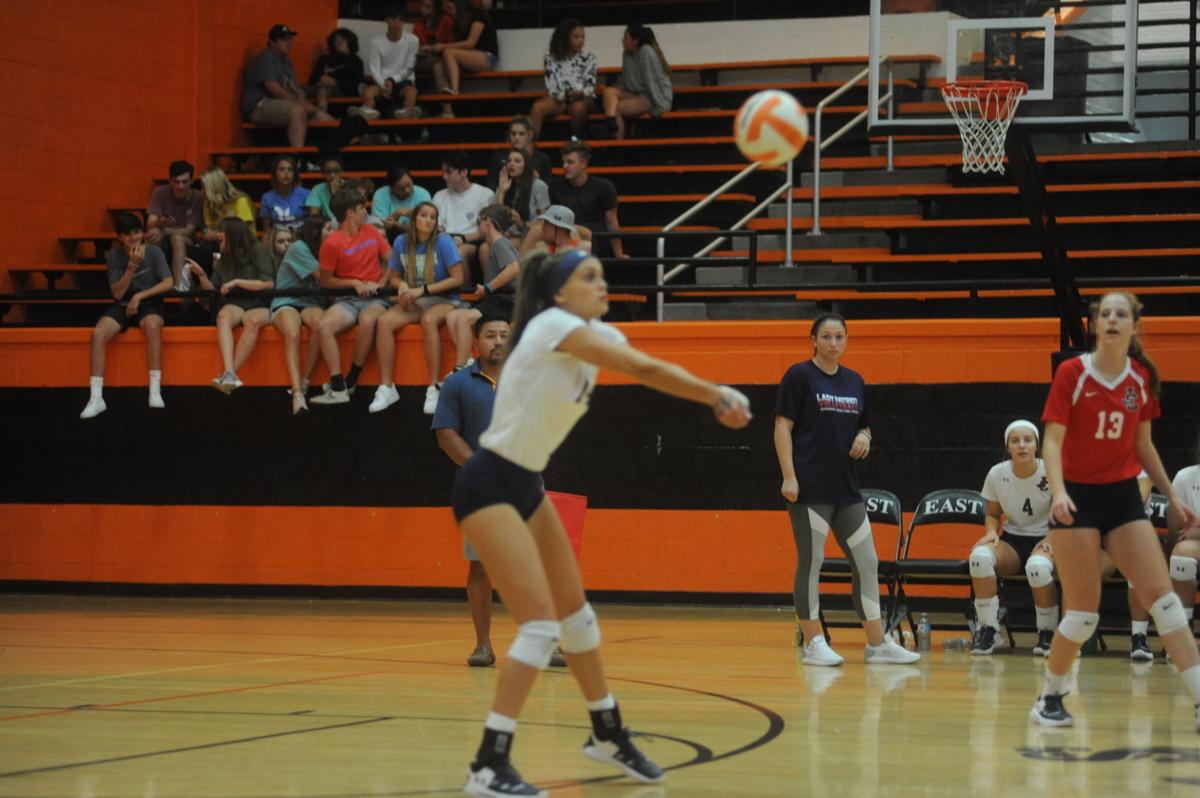 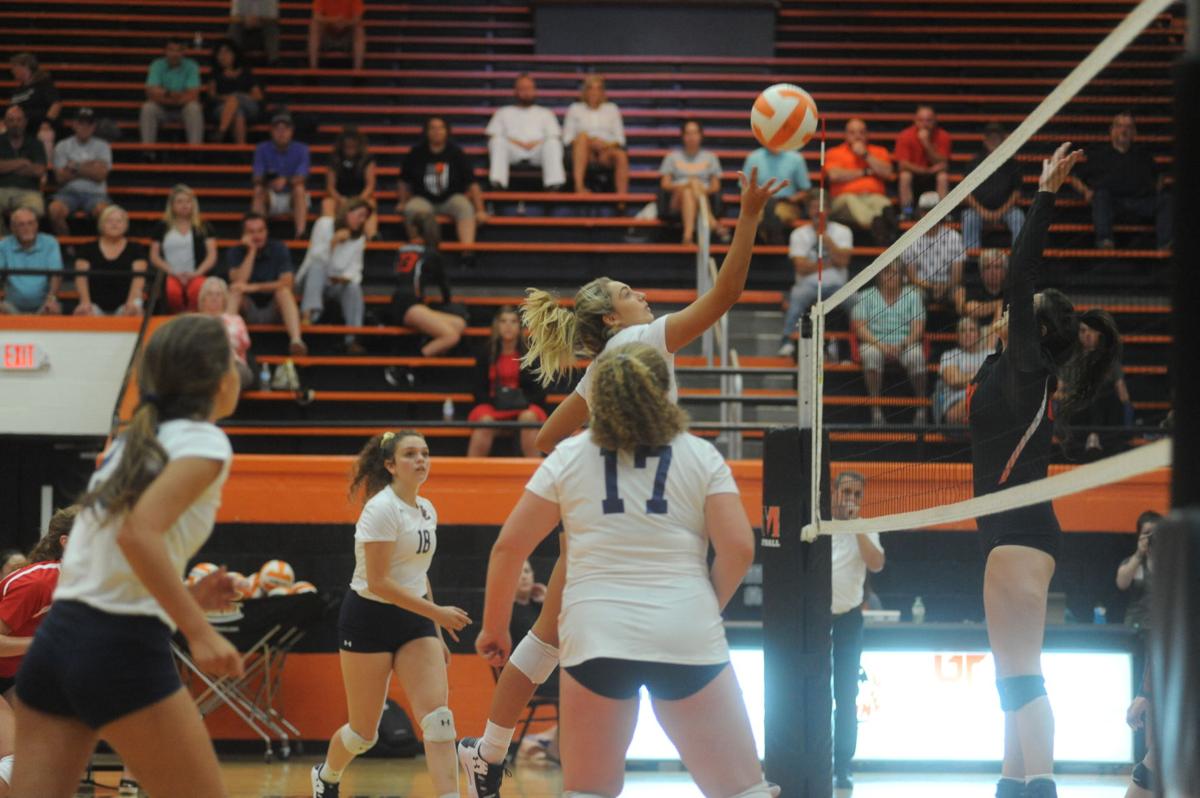 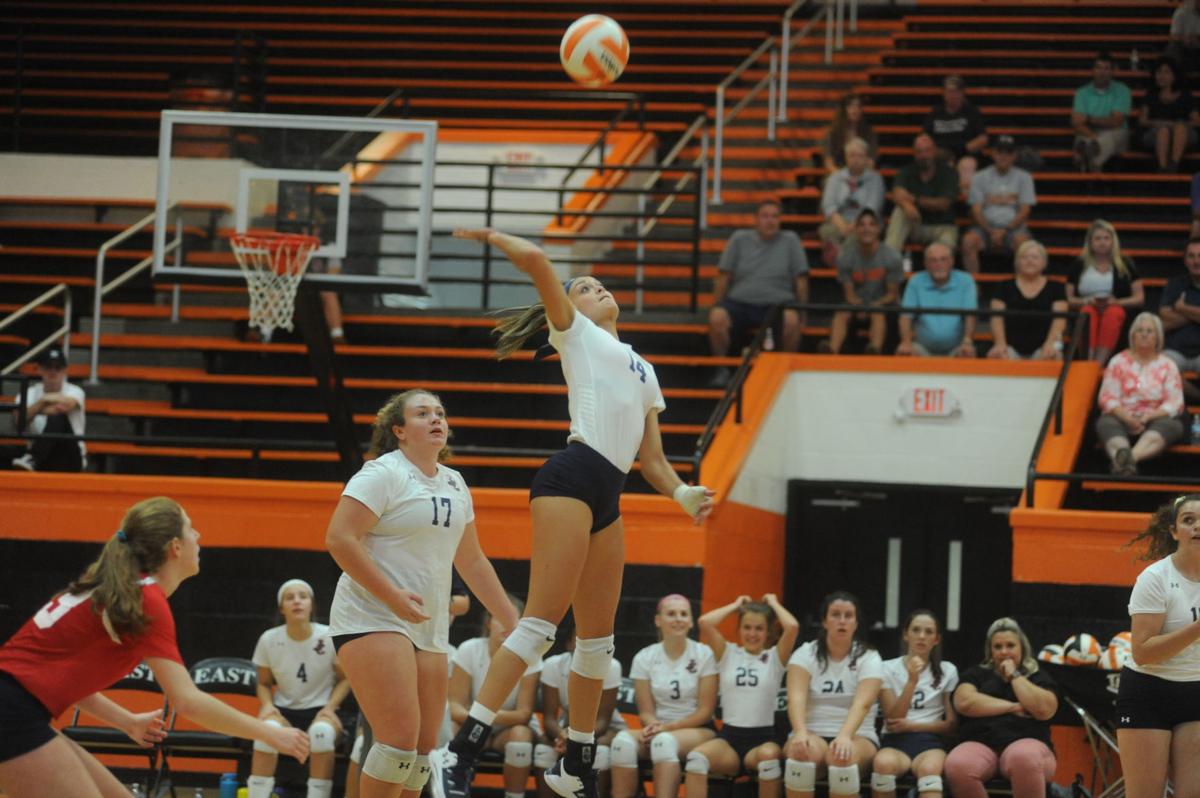 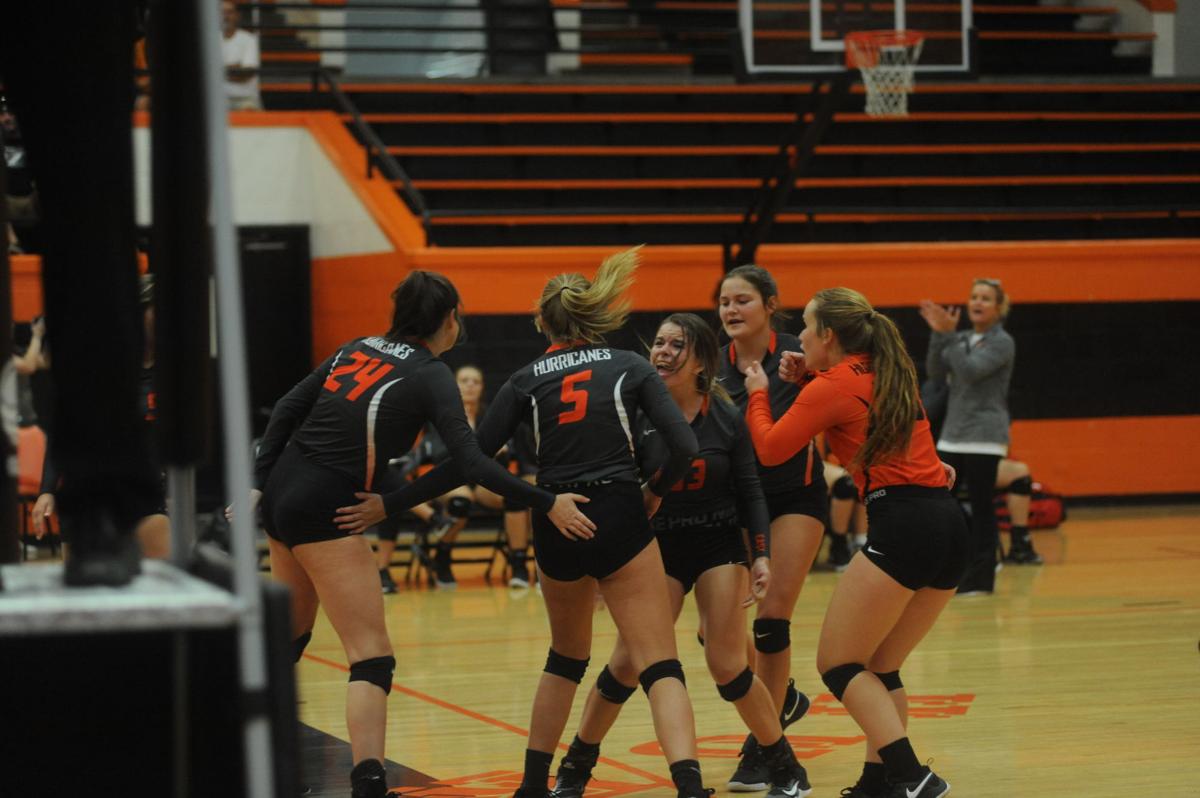 It appeared Jefferson County had survived Morristown East volleyball’s upset bid Tuesday night at Isenberg-Siler Gymnasium as the Lady Patriots battled back from a 2-0 deficit with a pair of wins and then grabbed a 13-8 lead in the decisive fifth set.

However, the Lady Hurricanes staged a furious rally, scoring the final seven points to capture a 3-2 victory and improve to 10-7 for the season. Jefferson County is 8-5.

East’s victory knocked the Lady Patriots out of their first-place tie with Morristown West in the Inter Mountain Conference and also kept alive the Lady Hurricanes’ chances to share the title.

The Lady Trojans are alone in first place at 5-1 after a 3-0 win over Cherokee on Tuesday while the Lady ‘Canes and Lady Patriots are tied for second at 4-2. A win by Coach Holly Drinnon’s club over West when the two play again on Sept. 28 would likely result in a three-way tie for the crown.

That fifth game was tied at 7-7 when Abby Blankenship dropped a shot into an open spot to put the Lady Patriots in front. Harley Shumaker and Blankenship added kills, Shumaker scored on a blocked shot before East had a hitting error. The teams traded points before East freshman Kierstin Bell knocked down a kill.

Jaci Drinnon served the final six points as the visitors hit two straight kills out of bounds and then she flipped a shot over the net to pull the Lady ‘Canes within 13-12. After a time out, another kill sailed long and it was tied.

Bell put down another kill to put East in front and then senior Sarah Jones knocked down the winning kill.

It was an exciting match from start to finish with both teams playing very hard and very well at times. There were even some calls that had the fans upset. However, when the last of those happened, it was 7-7 in the fifth set with nothing controversial down the stretch.

Drinnon said, “I was really proud of my girls tonight. I think we were very focused in our first two games and it showed. We stayed up.

“We kind of fell out of that a little in the next two but we still stayed in it. We got down and came back at the end of the fourth game.”

“You know, I thought we fought hard from the very beginning and, when it was a sure loss at 13-8, they came back. That was an unbelievable finish we had.”

Jones led the Lady ‘Canes with 13 kills while Bell and fellow freshman Finley Surber added 11 each. Reese Forester and Drinnon had 8 apiece.

Drinnon had 37 assists and Jules Lawson added 15. Lawson had 3 aces with Drinnon and Bell getting 2 each. Randi Drinnon registered 30 digs and Jaci added 17 and Jones 9.

“In the last three games, we did the things we needed to do. Things just wore on the girls mentally,” she added. “We have the skills and we should have taken it. We were there for so long, but they were worn out mentally.”

Sidney Keck and Bella Webb had 10 kills apiece for Jefferson County while Blankenship added 8. Cami Mincey served 4 aces and Kristin Mutterspaugh had 3 with Webb and Shumaker having 2 each.

Shumaker had 4 blocks and Keck added 2.

In game one, the score was tied at 3-3 when Webb had a kill, Mutterspaugh served an ace and Shumaker scored on a block. Webb had a kill and ace and Keck and Mincey added kills in a 5-1 run that put the visitors up 11-6. It was 13-8 when East rallied.

Bell had two kills, Madyson Greenlee added another and Drinnon had an ace as the Lady ‘Canes ran off seven straight to go up 15-13. After the Lady Patriots tied it, Jones put down a kill and Bell served an ace off the net and East never trailed again.

Game two was tied at each of the first seven points before East ran off a 9-1 run to take control. The Lady Patriots never got closer than seven the remainder of the set.

East led game three 19-15 before Webb and Keck had kills as Jefferson rallied to tie. It was tied at 19, 20, 21 and 22 but the Lady Pats scored the final three points.

In the next set, Jefferson County grabbed the lead early when Mincey served three straight aces for a 4-1 lead. The biggest lead of the set came at 24-17, but the Lady ‘Canes continued to battle.

East came back within 24-23 when a shot went out of bounds to force the deciding game.

It was the 10th win against six losses for West, which is now 5-1 in conference action.

Coach Natalee Gruse’s team entered the match tied with Jefferson County but took over first place as the Lady Patriots fell to East.

Gruse commented, “I thought we played pretty well tonight. We were able to get some of our younger players some action in the final set.

“It’s always nice to be able to do that because everyone works hard in practice.”

Nina Hodges paced the victory with 13 kills in the match. Taylor Simmons added 7 while Rebecca Noble and Kendall Mattison both added 5.

Hodges had 3 aces while Wallin added 2 with Simmons and Mattison serving up 1 apiece.

Nina Lovelace led in digs with 7. Halyn Long, Wallin and Noble all had 5. Mattison added four, Koenig 3 with Nina Taylor and Lila Lewis getting 2. Abbey Gilmore, Abby Trent, Faith Heskett and Carly McKenna all got 1.

Simmons had half of the team’s 4 blocks.

The Lady Trojans will be back in action on Thursday when they travel to Cocke County.