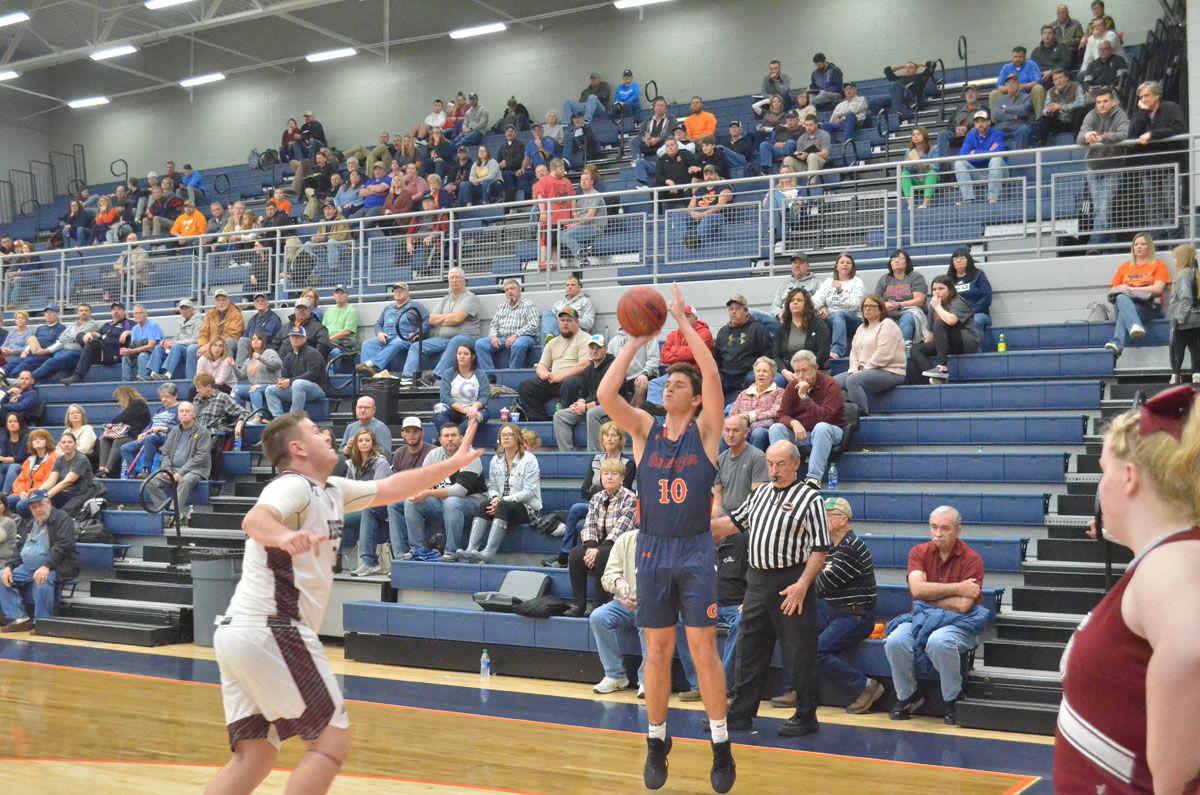 Grainger’s Tristan Warfield (10) puts up a 3-point shot against South Greene Monday night at The Den at Grainger High School. 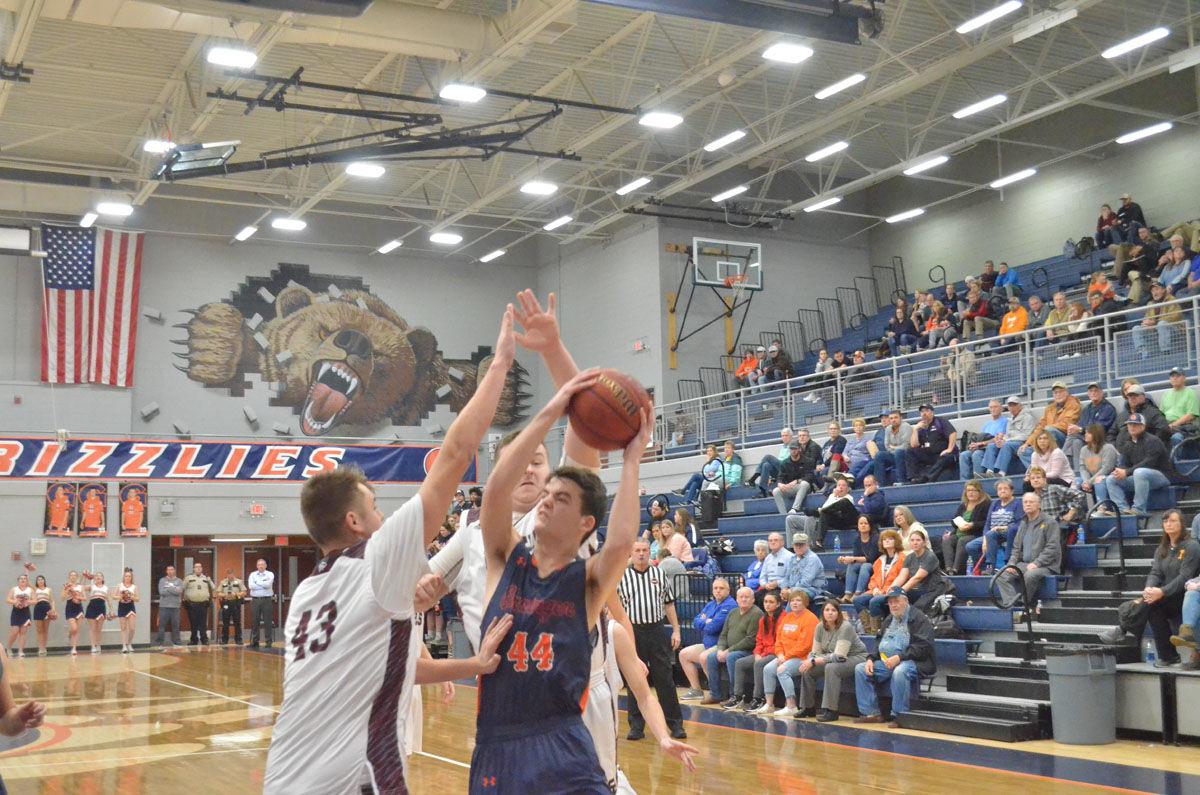 Grainger’s Tristan Warfield (10) puts up a 3-point shot against South Greene Monday night at The Den at Grainger High School.

RUTLEDGE — After falling to South Greene both times in the regular season, it appeared to be going the same way for the Grainger boys basketball team on Monday night in the District 2-AA semifinals at The Den heading into the fourth quarter.

Trailing by 11 and having multiple starters in foul trouble, the Grizzlies appeared destined to take on Claiborne in Tuesday’s third-place game, guaranteeing that they would travel for their first-round region matchup.

However, there was just one issue. Someone forgot to tell Grainger’s Jaxon Williams that the game was over.

Riding off Williams 12 points in the fourth quarter, the Grizzlies outscored South Greene 29-11 in the fourth, making an improbable comeback to upset the No. 2 seeded Rebels, 61-54. They will play Greeneville in the championship game at 8:30 p.m. Tuesday night.

“This team has been through a lot,” Grainger coach Adam Wolfenbarger said. “This record is not what we wanted it to be, but these guys are battle tested. They’ve played a tough schedule. They’ve gone on the road and they have had big wins. They fought their rear ends off tonight. There was never a doubt.”

With their backs against the wall to start the fourth, Williams came out with four straight points to make it a seven-point game. A Luke Jones layup made it five, but the Rebels answered with two free throws to push the lead back to seven.

Unfazed, it was Williams again, draining his second 3-pointer of the quarter. Following Williams’ lead, Brody Grubb hit a three of his own and suddenly it was a 45-44 game. While South Greene answered with an old-fashioned three-point play to make it a four-point game again, Jones would not be denied, hitting two shots to tie the game at 48.

After a defensive stop, Williams gave the Grizzlies the lead for good, drilling a three-pointer. Emmanuel Atkins followed it up with a steal and basket to give Grainger a five-point lead with a minute to go. The Grizzlies hit their free throws down the stretch to seal the win.

Williams led Grainger with 19 points in the game, stepping up with the game one the line to give his team a much-needed confidence boost.

“To be honest, he didn’t really have a good first half, so I challenged him in the locker room at halftime pretty good,” Wolfenbarger said. “Jaxon is a guy that doesn’t get really fazed. He’s made big shots for us, he’s a scorer, and that’s the role we want him in.”

Along with Williams, Jones had 10 points in the game while Trey Robinson added nine. Tristan Warfield had eight. South Greene was led by Levi Myers who poured in 15 points. They will play Claiborne in the third-place game on Tuesday at 5:30 p.m.

Coming into the game, the Rebels boasted arguably the best post duo in the district in Chase Carter and Sully Fox. Knowing this, the Grizzlies went to a zone defense to try and deny the ball down low. While they had a few breakdowns in the third quarter, the zone worked as the duo combined for just 18 points.

“We did a great job in that zone,” Wolfenbarger said. “That was the gameplan all along to try and pinch in there and keep the ball out. We wanted them to have to beat us from outside. We weren’t sure they had enough shooters to do that. Hats off to South Greene though. They played hard.”

After a back and forth first quarter saw South Greene come out with a four-point lead, Grainger fought back early in the second, tying the game up at 14. However, with Warfield and Grubb on the bench in foul trouble, South Greene tried to go for the kill, reeling off four quick points.

But the Grizzlies wouldn’t let them, tying the game back up. The two teams remained even going into the half after Robinson closed with a 3-pointer.

In the third, Grainger came out of the gate firing as Warfield drained a three to put them up three. But after that it was all Rebels, reeling off a 13-0 run to go up by 11. Grainger briefly stopped the bleeding with baskets from Grubb and Atkins, but South Greene still led by 11 heading to the final frame.

However, that was when Williams got the Grizzlies going and, with the home court advantage, Grainger was able to hang on,

“That was an unbelievable atmosphere in here,” Wolfenbarger said. “I was trying my best to get them fired up and get them going. I love this place. I am proud of my guys.”

Do you think the residents of the Lakeway Area are taking social distancing seriously enough?