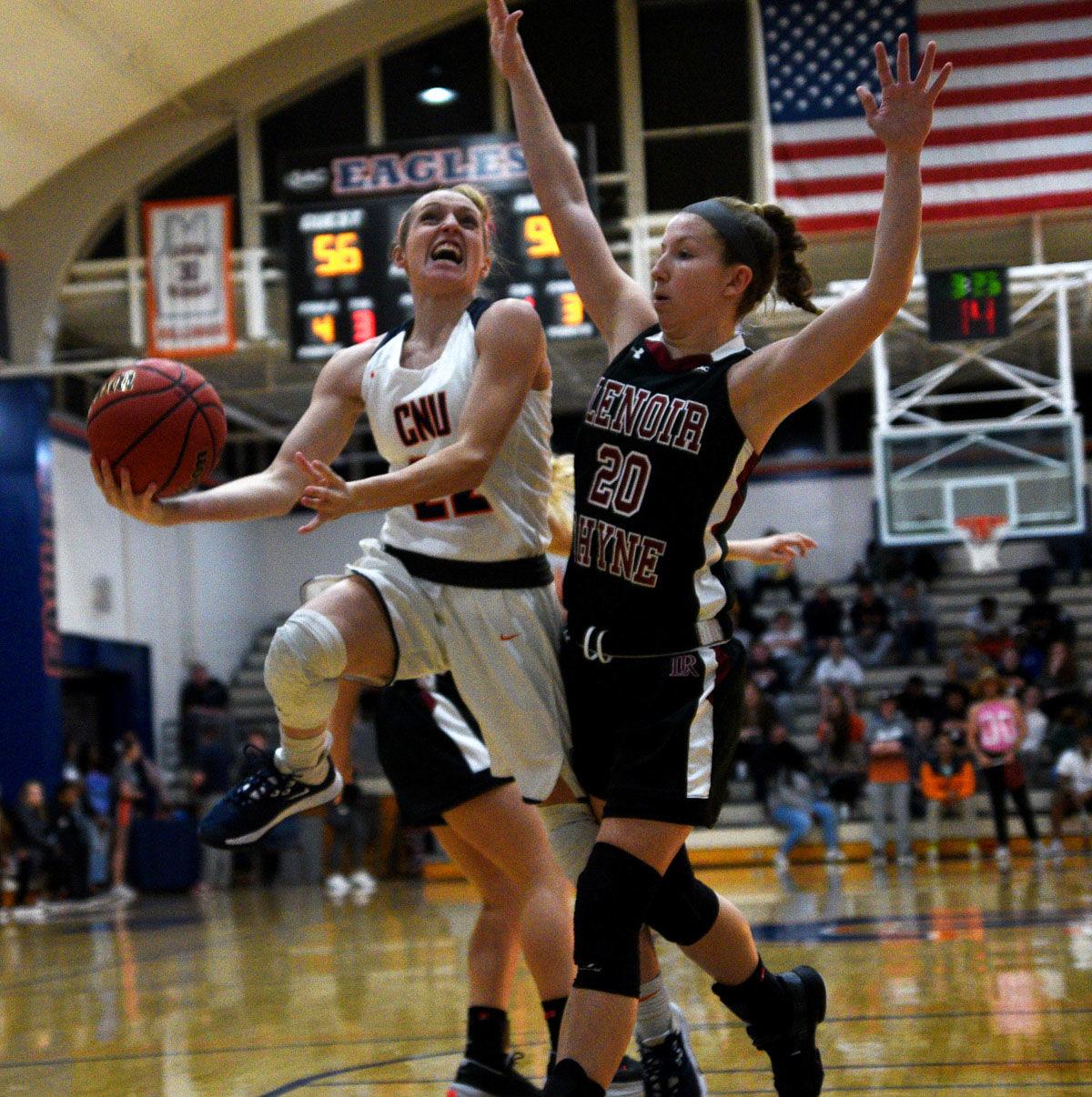 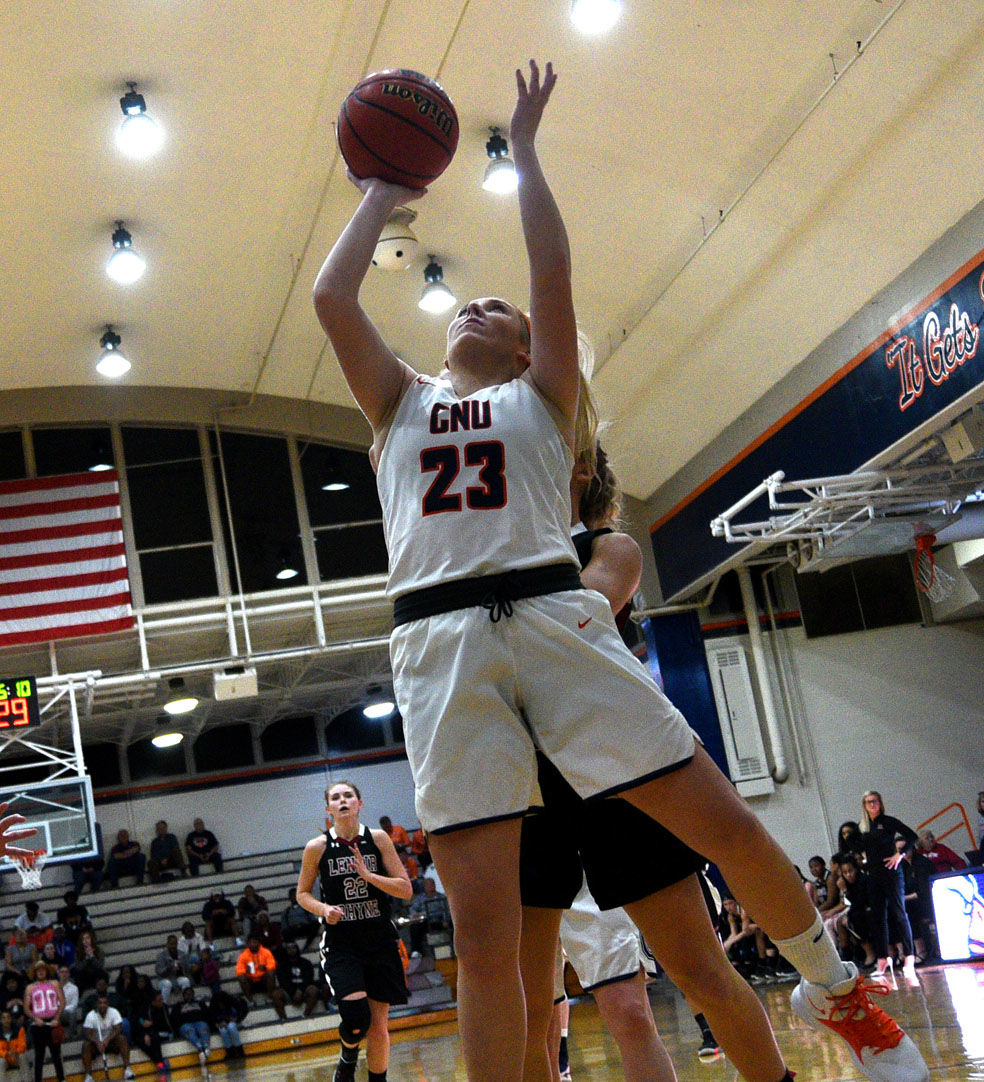 Carson-Newman’s Tori Griffin cuts past a Lenoir-Rhyne defender for a layup Wednesday night at Holt Fieldhouse in Jefferson City.

Carson-Newman’s Tori Griffin cuts past a Lenoir-Rhyne defender for a layup Wednesday night at Holt Fieldhouse in Jefferson City.

“Seven of the 10 players in the first half hit a three,” Carson-Newman coach Mike Mincey said. “Then again I think we hit more threes than we did twos. Obviously that is not a recipe for long-term success especially in the tournament but when you are shooting them and making them.

“The difference in the game in the first half outside of the threes was that our bench had 34 points and their bench had two. We are very fortunate right now that our second, if you want to call them the second team, have actually started for us before. We actually have eight starters. We feel like we are 10 or 11 deep. For me as a coach, it’s the riches of having really good players and we don’t have that drop off when I go to the bench.”

The triple digits are the most points scored by the Lady Eagles ever in 76 meetings with the Bears passing a 97-point effort in the 1992 SAC Tournament. C-N tallied 61 bench points on the night.

The Lady Eagles buried double-digit three-pointers for the 15th time this season matching the 2017-18 team for the most such efforts in a single season in school history.

Tori Griffin led all players with 21 points on the night going 7-for-12 from the field and making four triples. The senior added three rebounds and three assists.

“I just wanted to play hard and honestly give it my all,” Griffin said. “I only have a few games left so I just wanted to leave it all out there. I played with a good group of girls that passed me the ball when I was open so it just worked out really well.”

Kayla Marosites logged her 18th double-double of the year finishing with 18 points, 13 rebounds and four assists in 21 minutes on the floor.

Defensively, the Lady Eagles swatted 10 shots, their second double-digit effort of the year, holding the Bears to 30 percent shooting in the game and 5-for-25 from deep.

The Bears made five of their first 10 shots from the field and pulled even at 13 midway through the first frame on free throws from Laney Fox. Carson-Newman found its shooting stroke draining 10 of its final 11 field-goal attempts scoring the next 16 points and 22 of the final 25 to take a 35-16 lead after 10 minutes.

Lenoir-Rhyne scored nine of the first 12 points of the second quarter to close the gap to 38-25 with 7:44 to go before halftime. The Lady Eagles surged scoring eight of the final nine points capping the half on a put-back from Taylor Goforth at the buzzer to go ahead 54-31 at the break.

Mincey’ team opened the third period on a 13-3 run to expand the bulge to 33 points at 67-34 just over four minutes into the stanza. A 14-5 counterpunch from the Bears closed the gap to 24 before C-N posted four of the final six points to go ahead 76-50 going into the final frame.

The Lady Eagles cruised in the fourth period pushing the score to as high as 38 in the final half minute of the game before Blair Barefoot hit the final shot of the game to close the gap to 36 at the final horn.

Four visitors posted double figures led by 16 points from Hanna McClung going 6-for-11 from the field. Addisen DeLucas added 13 points and five boards in 13 minutes off of the bench.

Karlie Bearden posted a double-double with 10 points and 10 boards and Ashley Woodroffe registered 10.