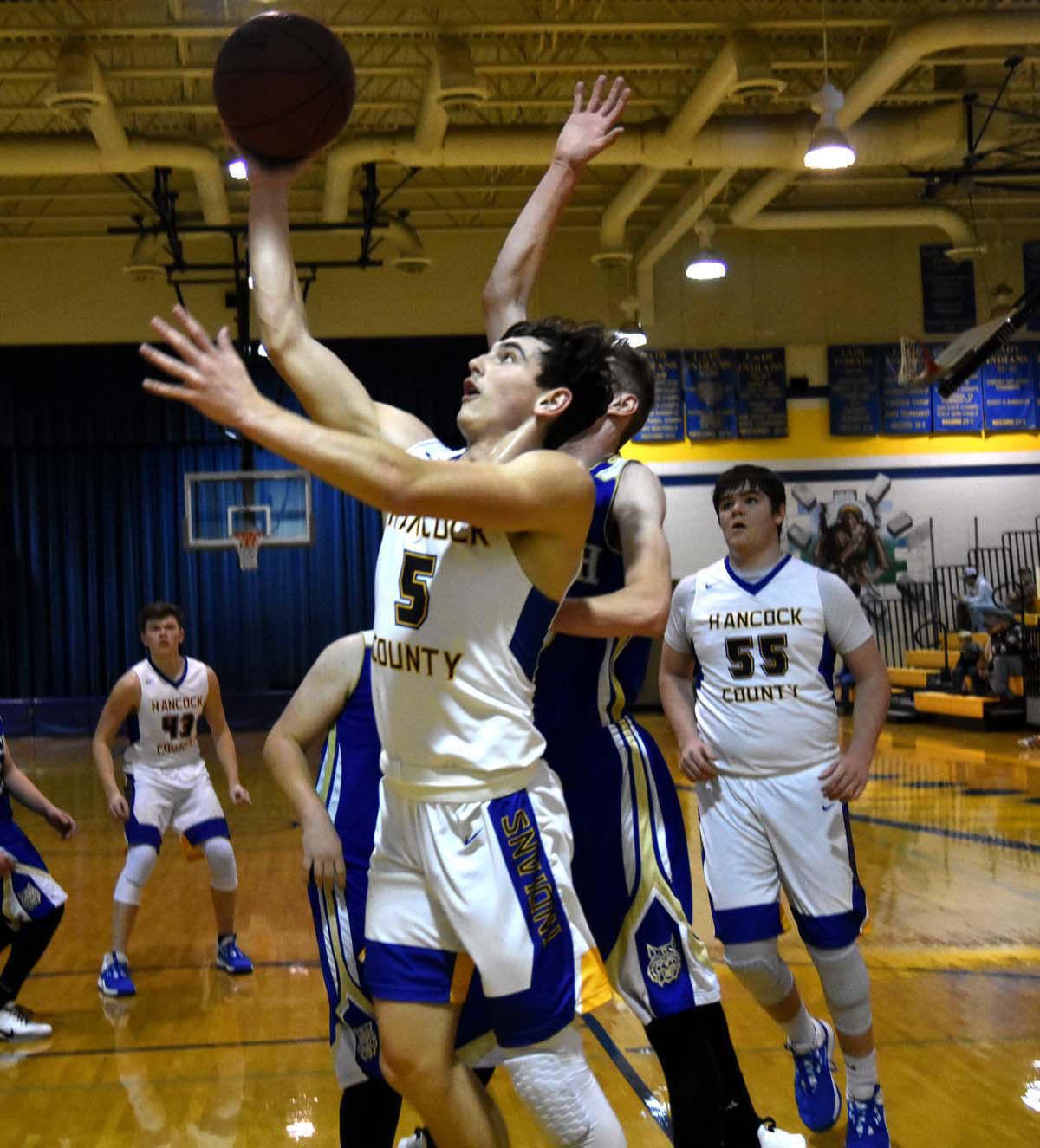 Hancock County’s Hunter Hatfield (5) drives to the basket in the first quarter of Thursday night’s game against Clinch. Hatfield led all scorers with 17 points. 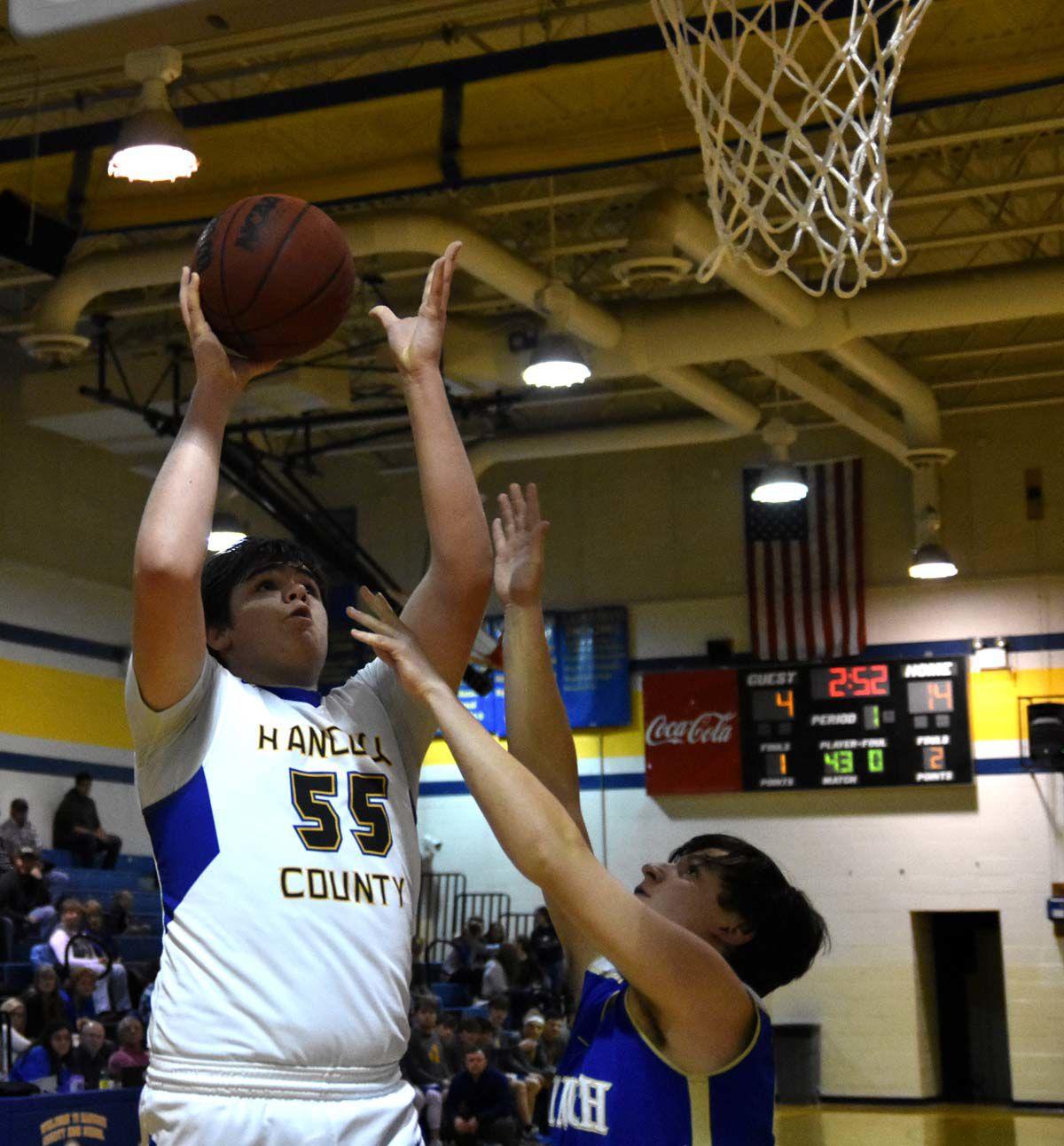 Hancock County’s Hunter Hatfield (5) drives to the basket in the first quarter of Thursday night’s game against Clinch. Hatfield led all scorers with 17 points.

SNEEDVILLE – The Hancock County boys basketball team knocked Clinch High School out of the game before it could even get started on Thursday night.

Using full-court pressure, the Indians broke out to a 10-0 lead and never let down, defeating the Wildcats 65-16 for their fourth win of the season.

“I liked how we came out and were aggressive early,” head coach Evan McCoy said. “That was our goal to be aggressive early. We’ve been talking about coming out and putting it to the other team first, and we were able to do that tonight. I was pretty pleased with our effort tonight.”

Hunter Hatfield led the way for Hancock County with 17 points, despite playing limited minutes in the second half due to the large lead the Indians had.

Hatfield led the charge to the quick start for Hancock County with 12 first quarter points and all 17 of his points came in the first half.

Devon Blevins had 10 points for the Indians while Parker Lamb had eight points off the bench. Hancock County tried to get the ball down low to utilize the size advantage that Chandler Ferguson had on the Wildcats. Ferguson had seven points.

“We were wanting to get Chandler in a rhythm tonight,” McCoy said. “The game plan was to isolate him and get him in a rhythm, and I thought he did a good job and made some nice moves. I think it will be something for him that will lead to good things.”

Hatfield started the game off with two straight buckets. After a Joe Ferguson bucket made it 8-0, Hatfield stole the ball on the inbounds pass and laid the ball in.

Hancock County got turnovers on the inbounds pass three other times in the first quarter, leading to points each time.

“We’re a young team, and so we want to try and start pressing,” McCoy said. “That’s what we’ve been trying to do lately. We want to get the game going fast because we’re deep enough to handle that. We just tried to pressure the ball and jump passing lanes.”

The Indians put on more steam in the second quarter with their defense, holding Clinch to one point, a free throw with three minutes left, and scored 20 points to take a 42-8 lead into the half.

Because of the lead, McCoy was able to use his bench in the first half and played them for the majority of the second half. With district play heating up, a game like this benefits the Indians, who can see the depth they can use in tight games moving forward.

“It was great to do that because we’re young,” McCoy said. “It was great for the guys who haven’t gotten any varsity action much to get playing time. That’s only going to help us from here.”

The second half saw the game get physical with 11 of the 19 points scored in the third quarter coming from the free throw line. Hancock held Clinch to just six points in the quarter and carried it over to the fourth, holding the Wildcats to two points. Those two points came in the final 25 seconds of the game.

Hancock County has a quick turnaround, travelling 2.5 hours to Greenback on Friday for a district game. The boys game tips-off at 7:30 p.m.

“We have a long road trip tomorrow night, and I want to see us go and keep the momentum,” McCoy said. “I think we can really get on a roll here at Christmas. We just need to carry this momentum into conference play, and I think that will be good for us.”