Carson-Newman running back Troy Dendy (27) dives through Tusculum tacklers to put the ball into the end zone from 22 yards out Saturday at Burke-Tarr Stadium in Jefferson City. The Eagles won 49-13 to secure a spot in the NCAA Division II playoffs. 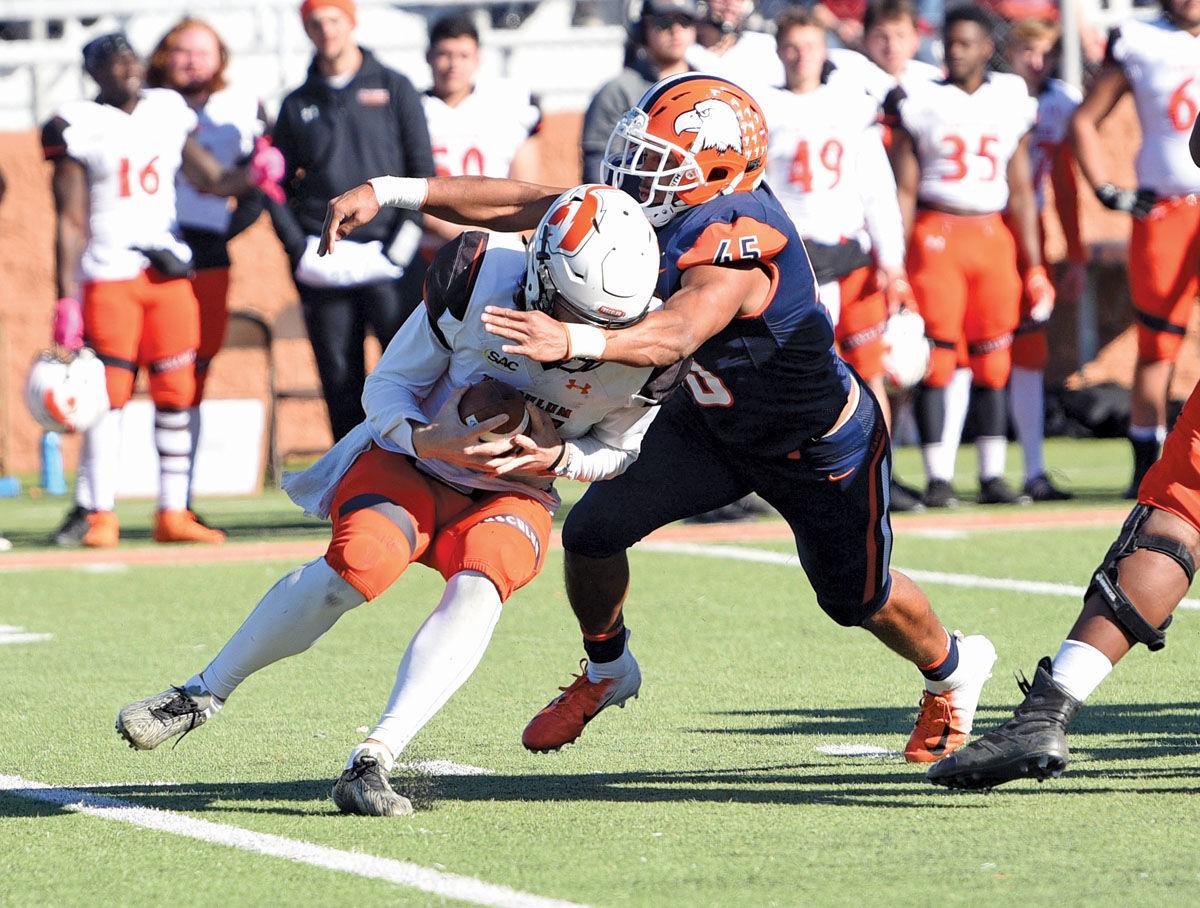 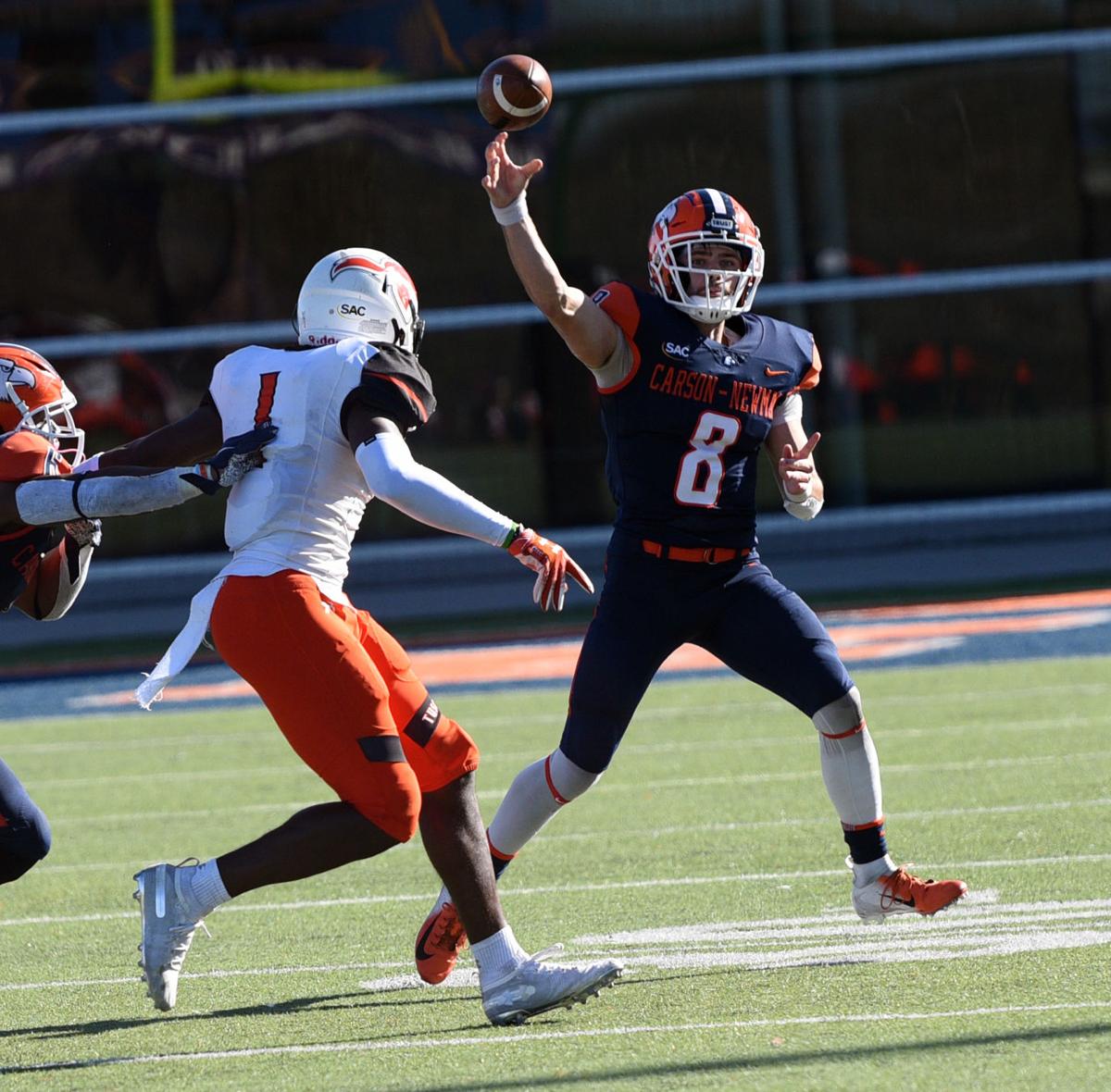 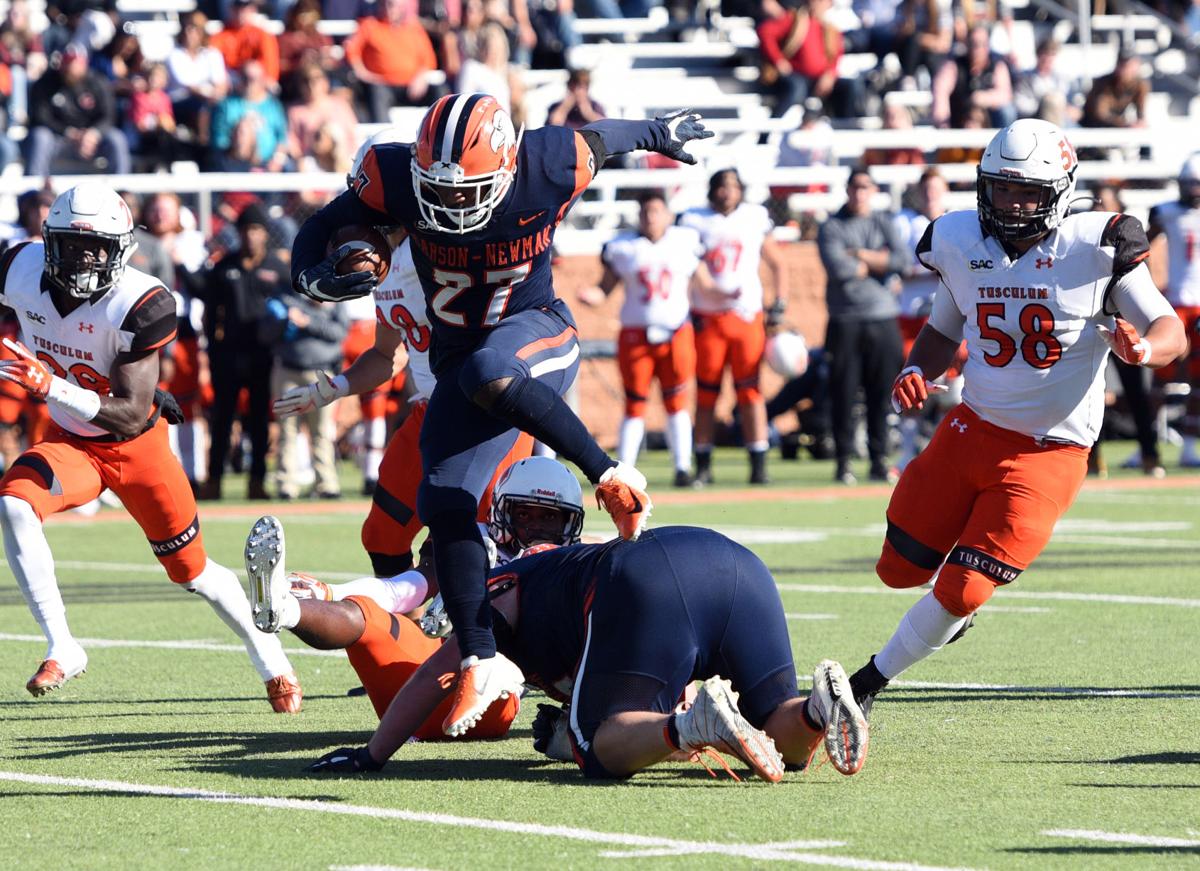 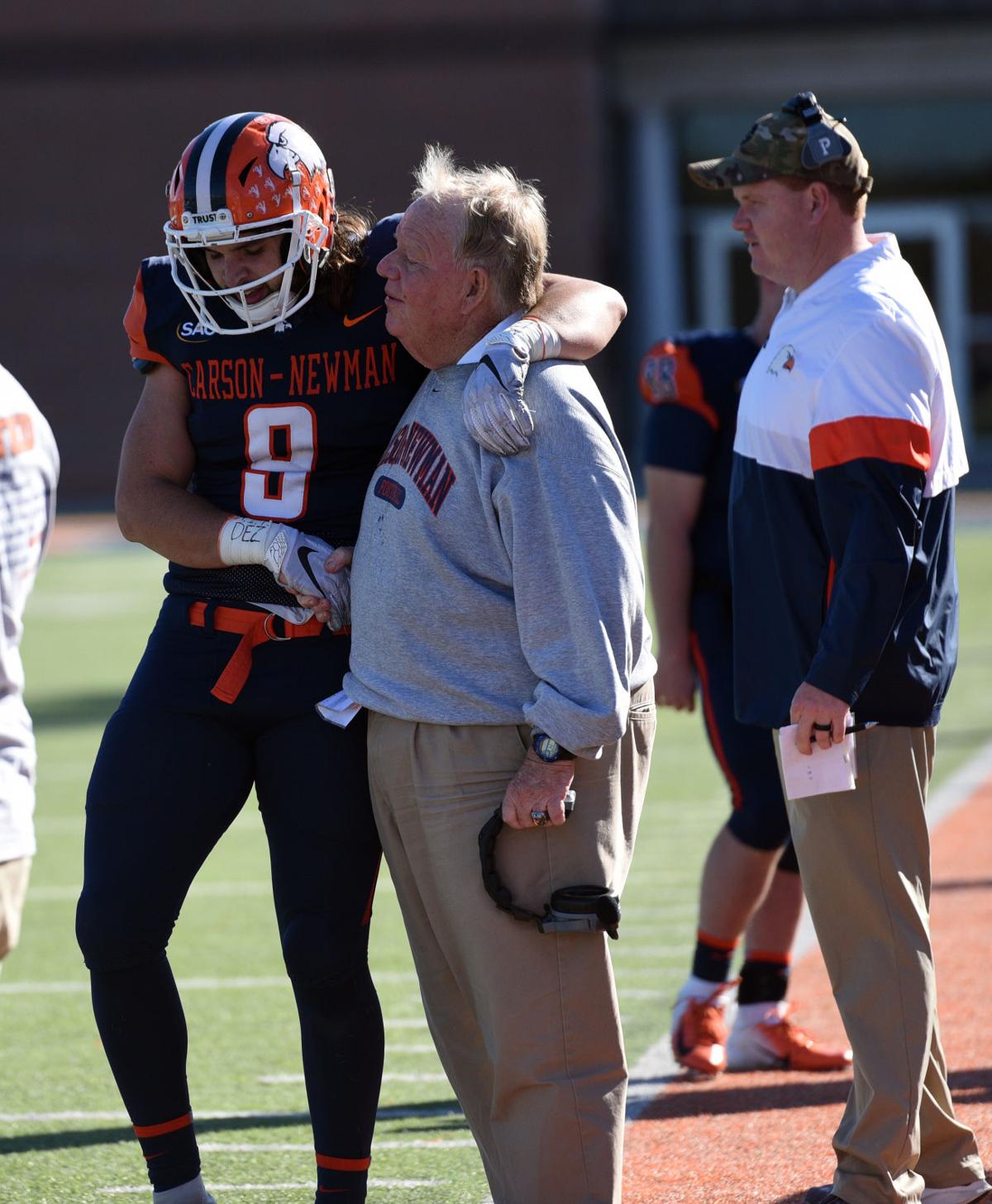 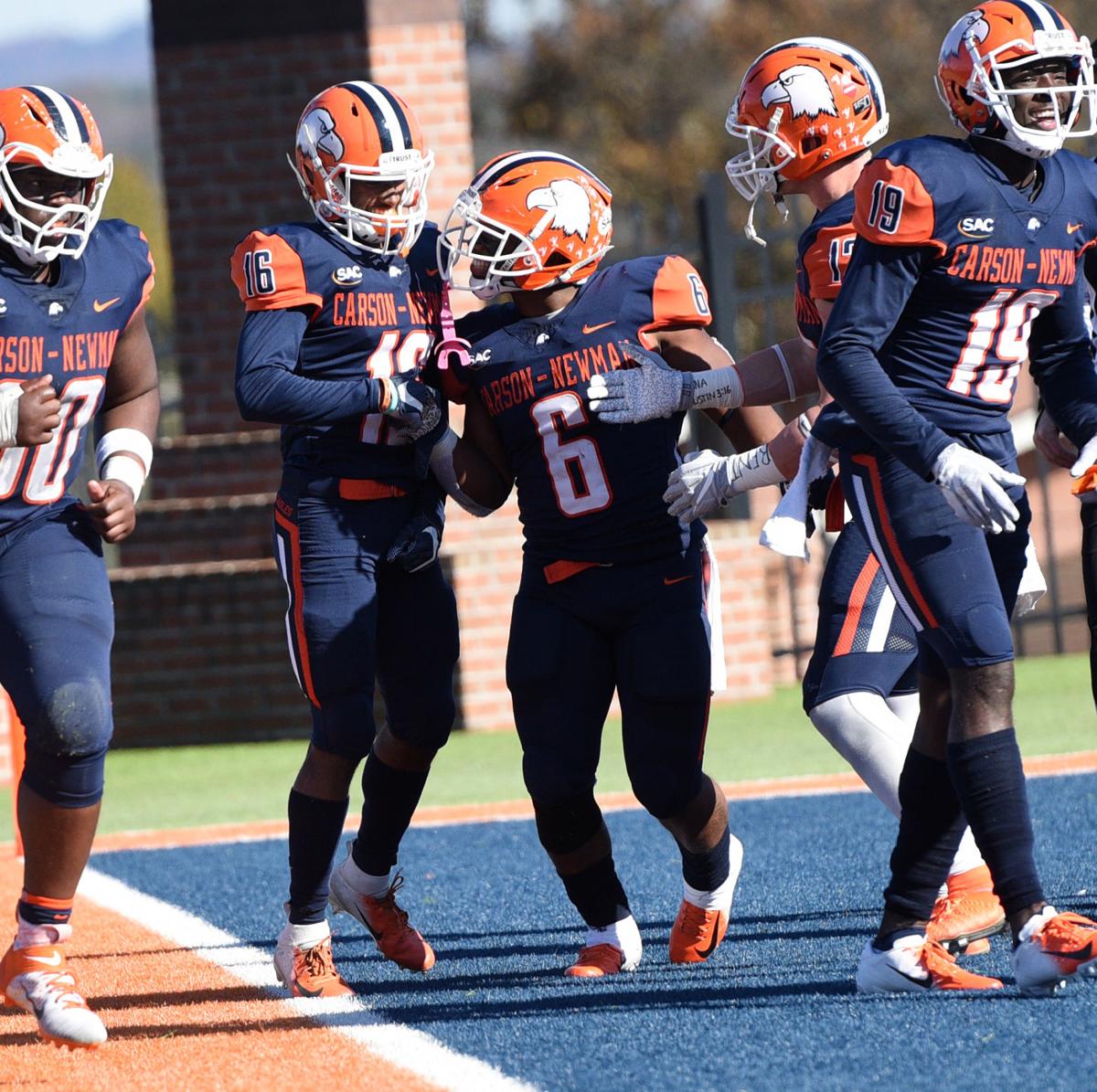 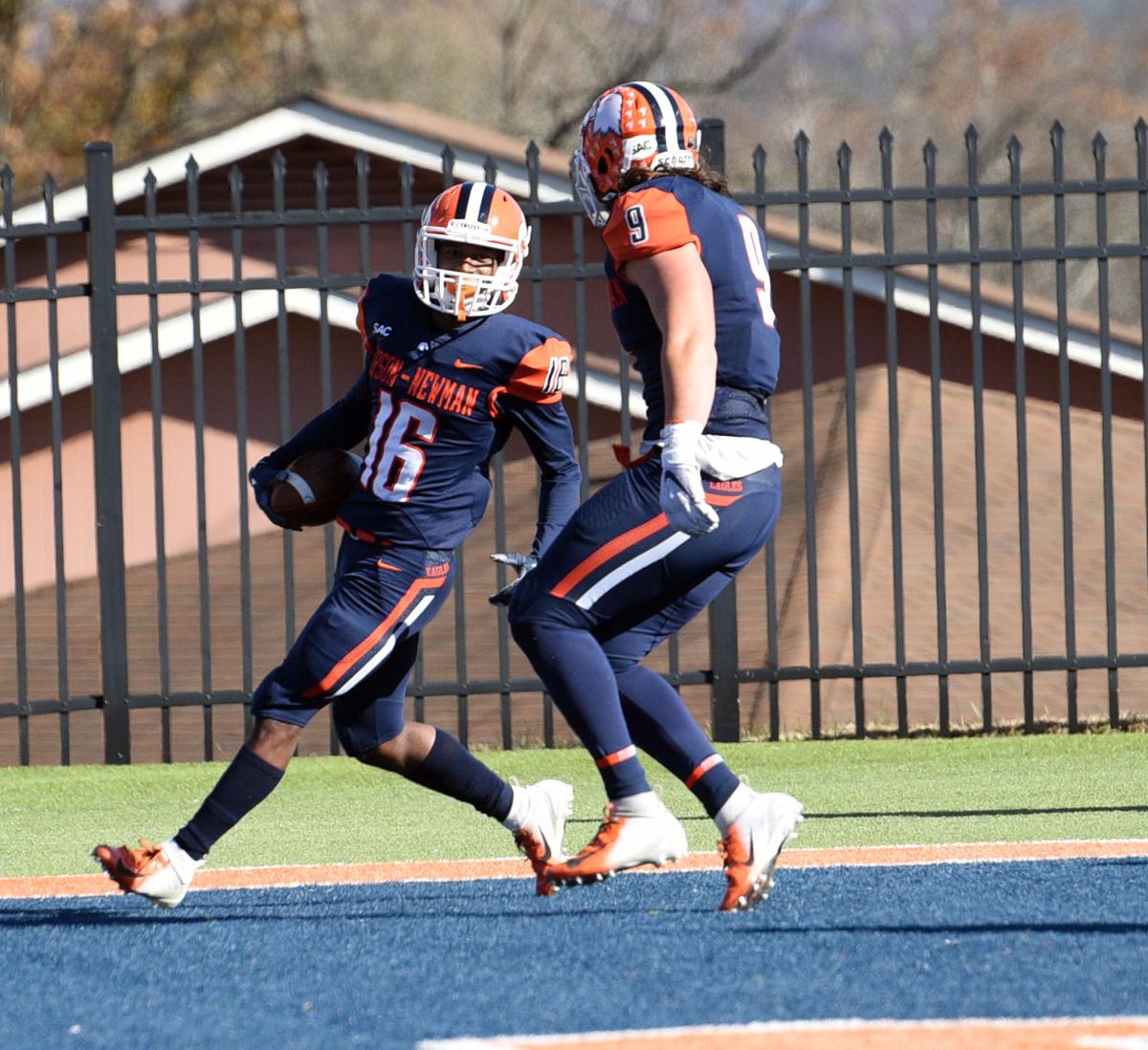 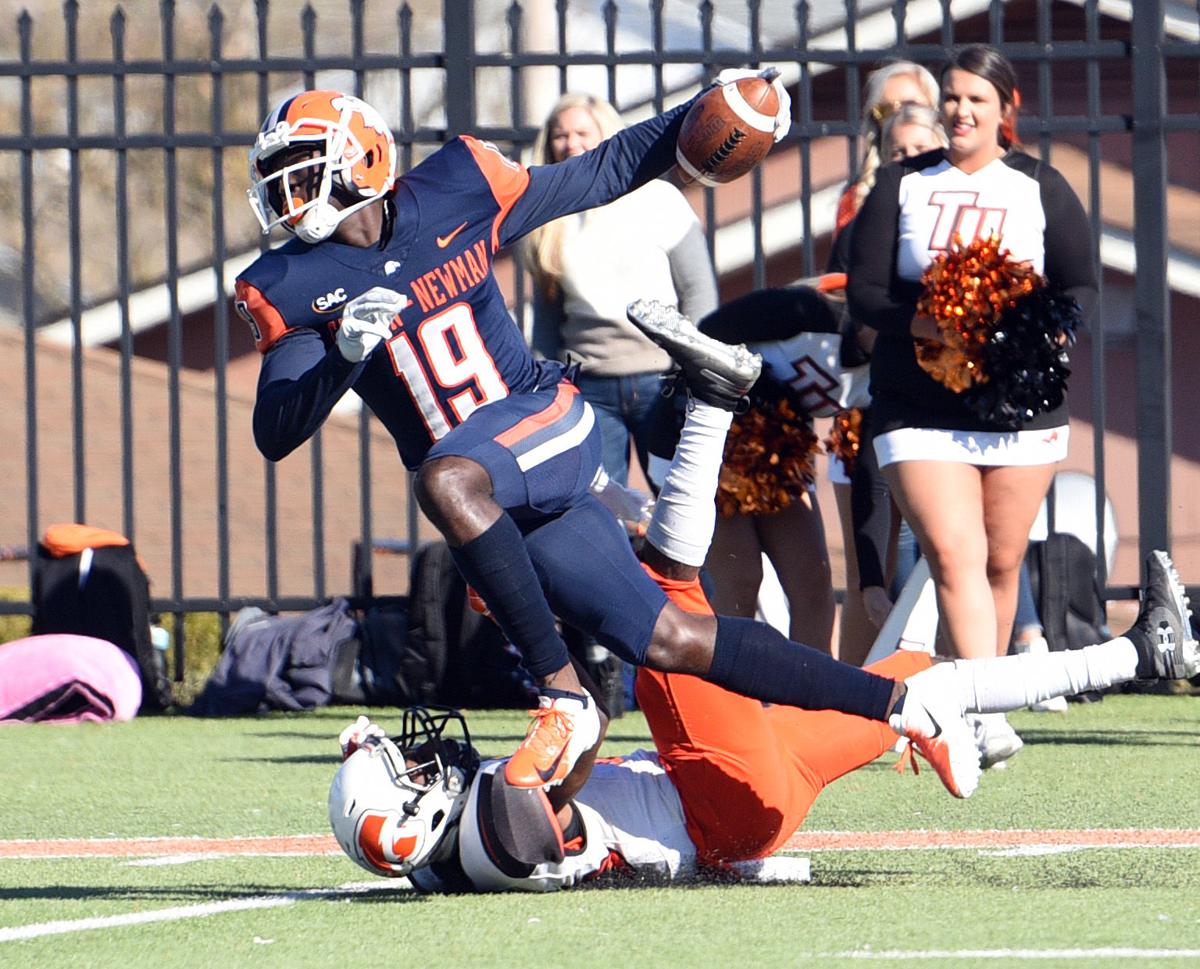 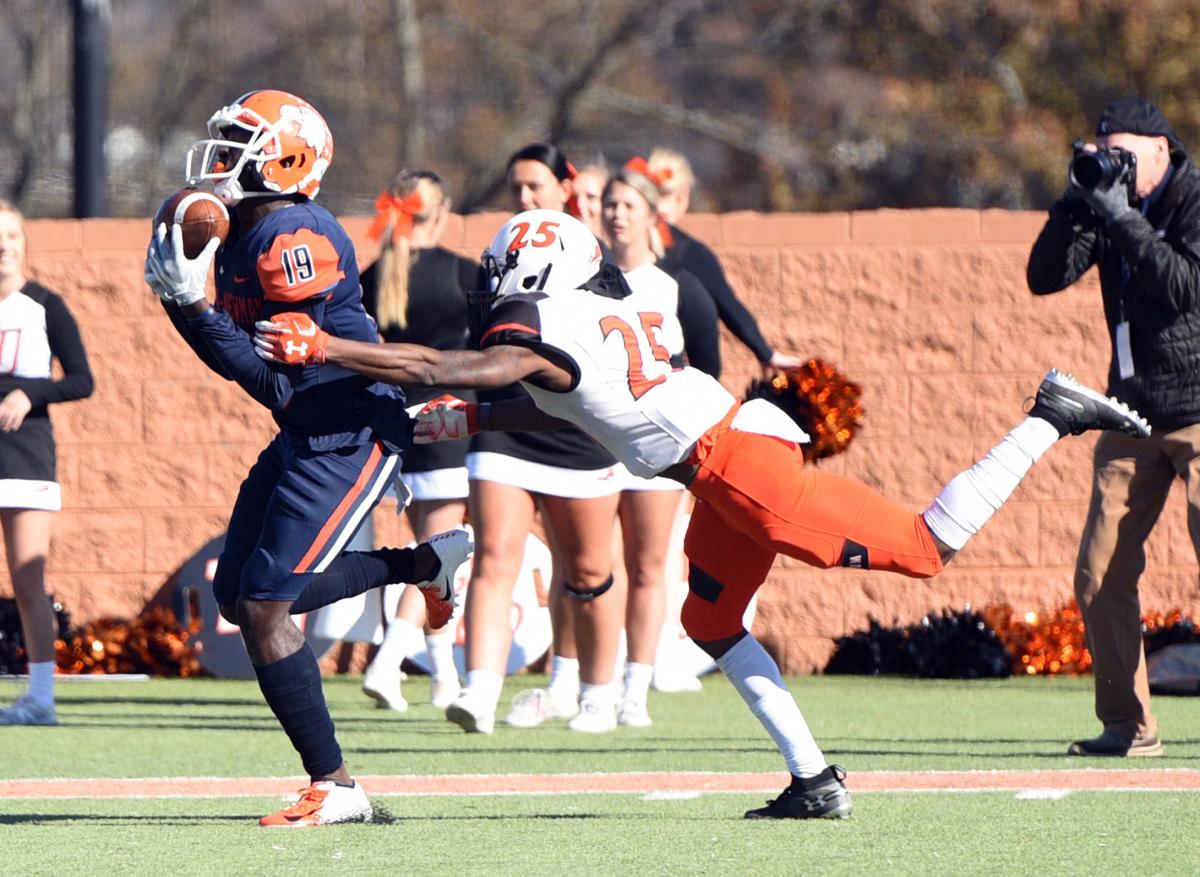 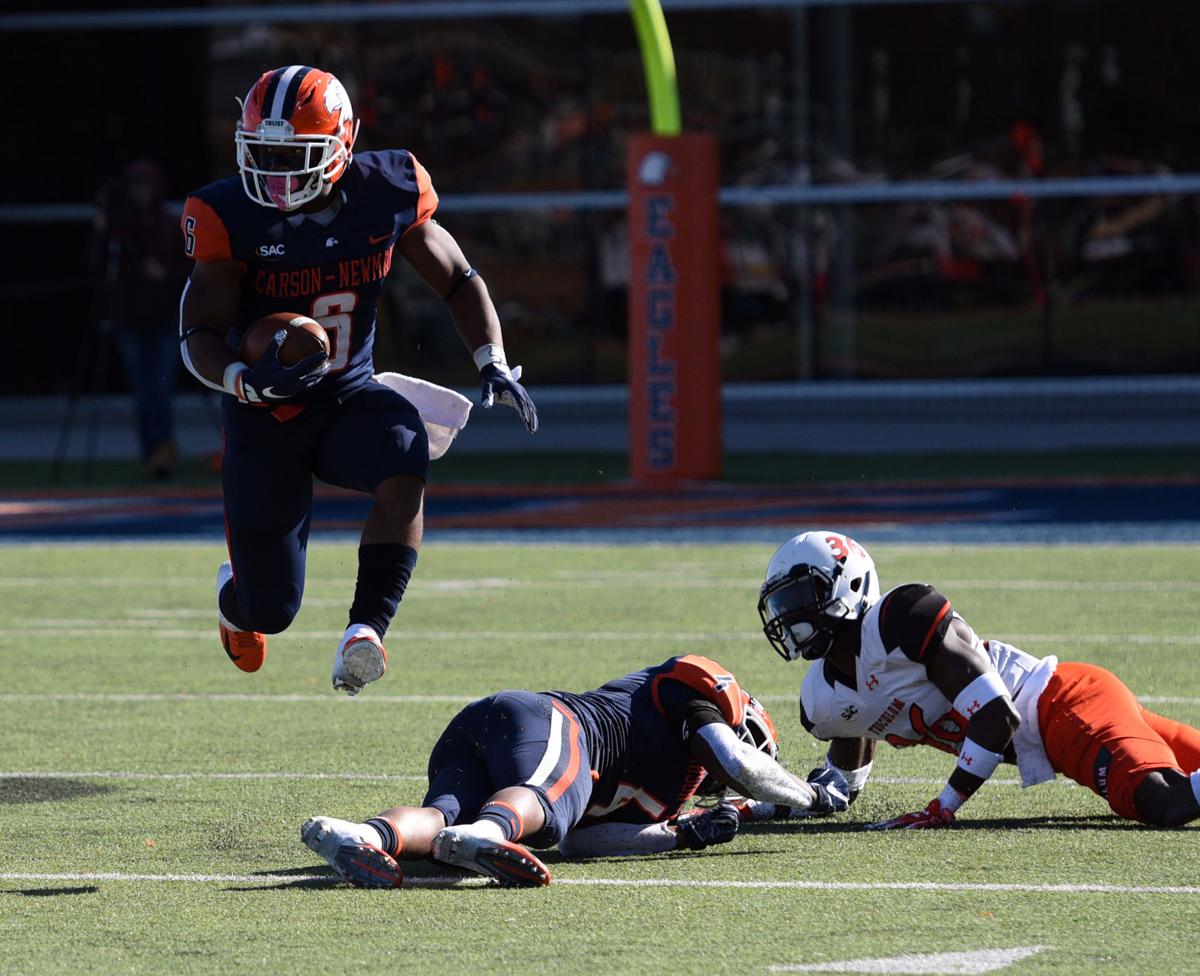 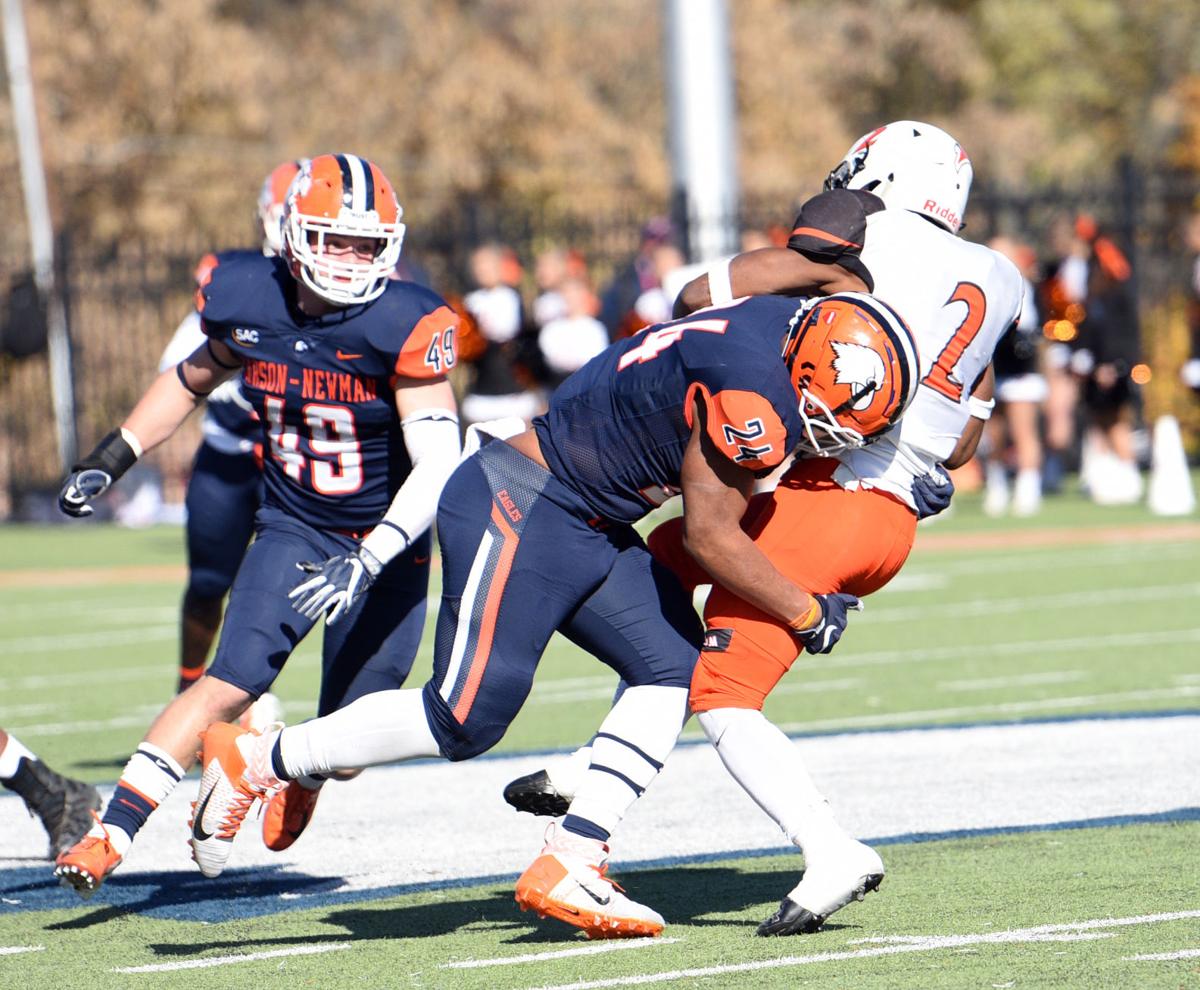 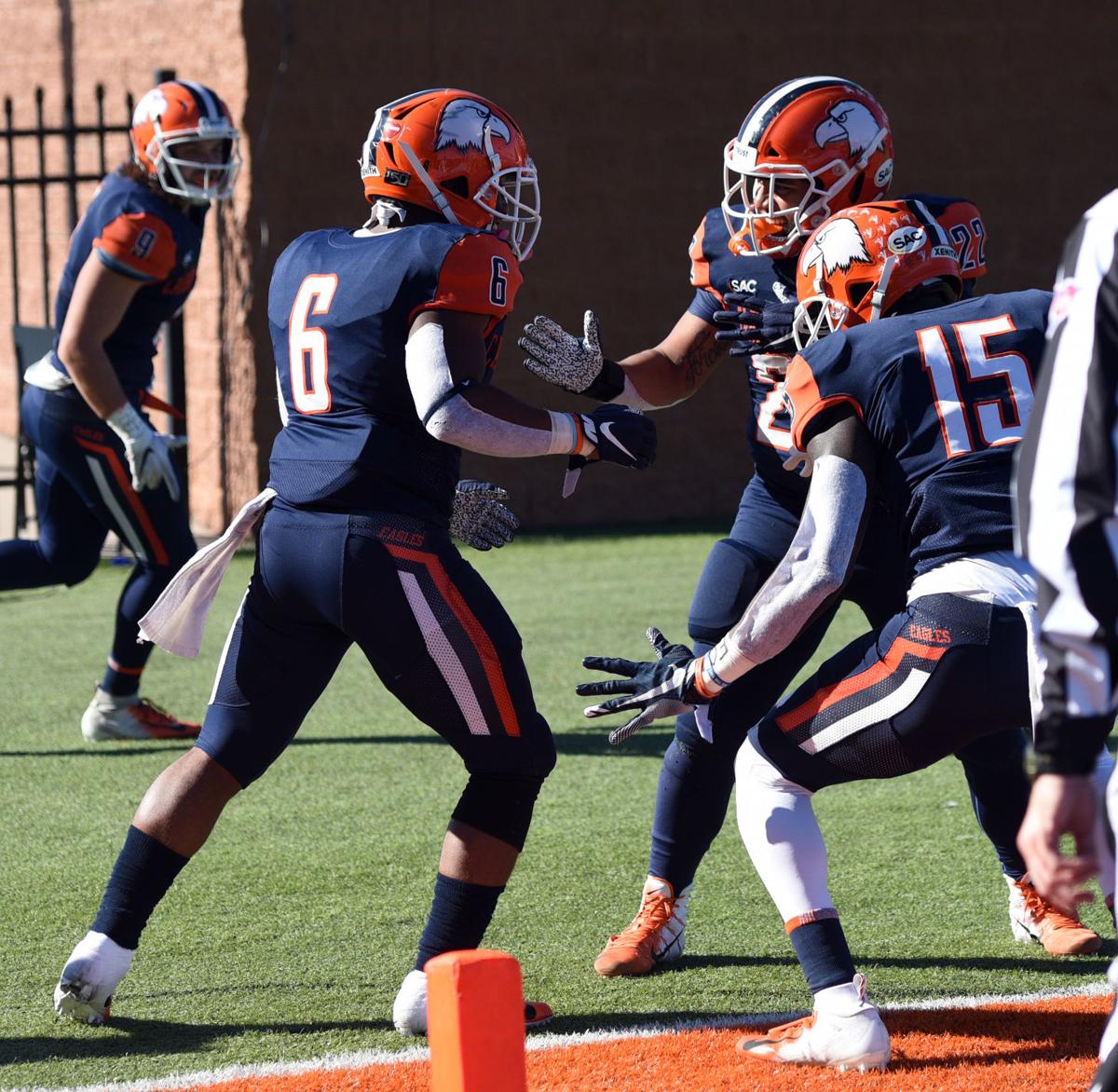 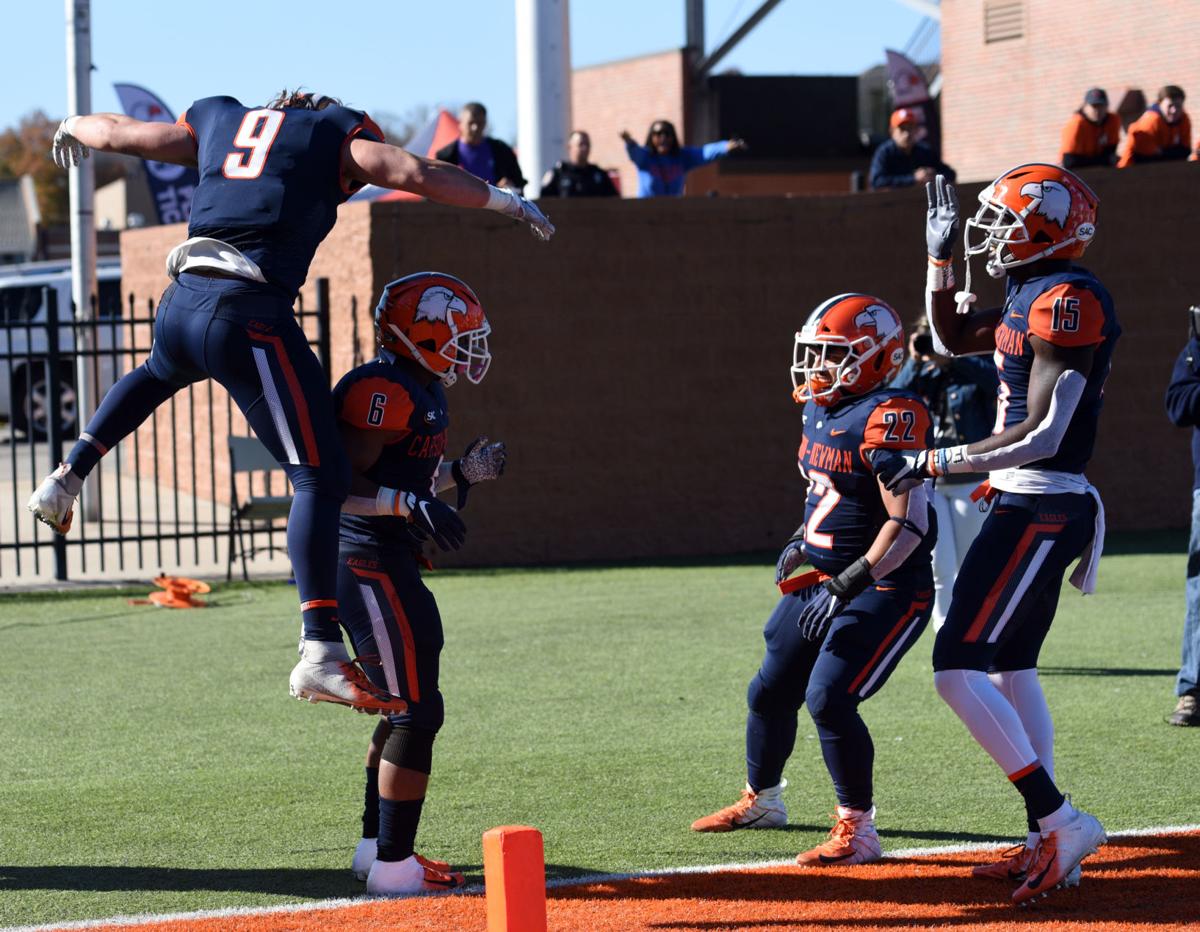 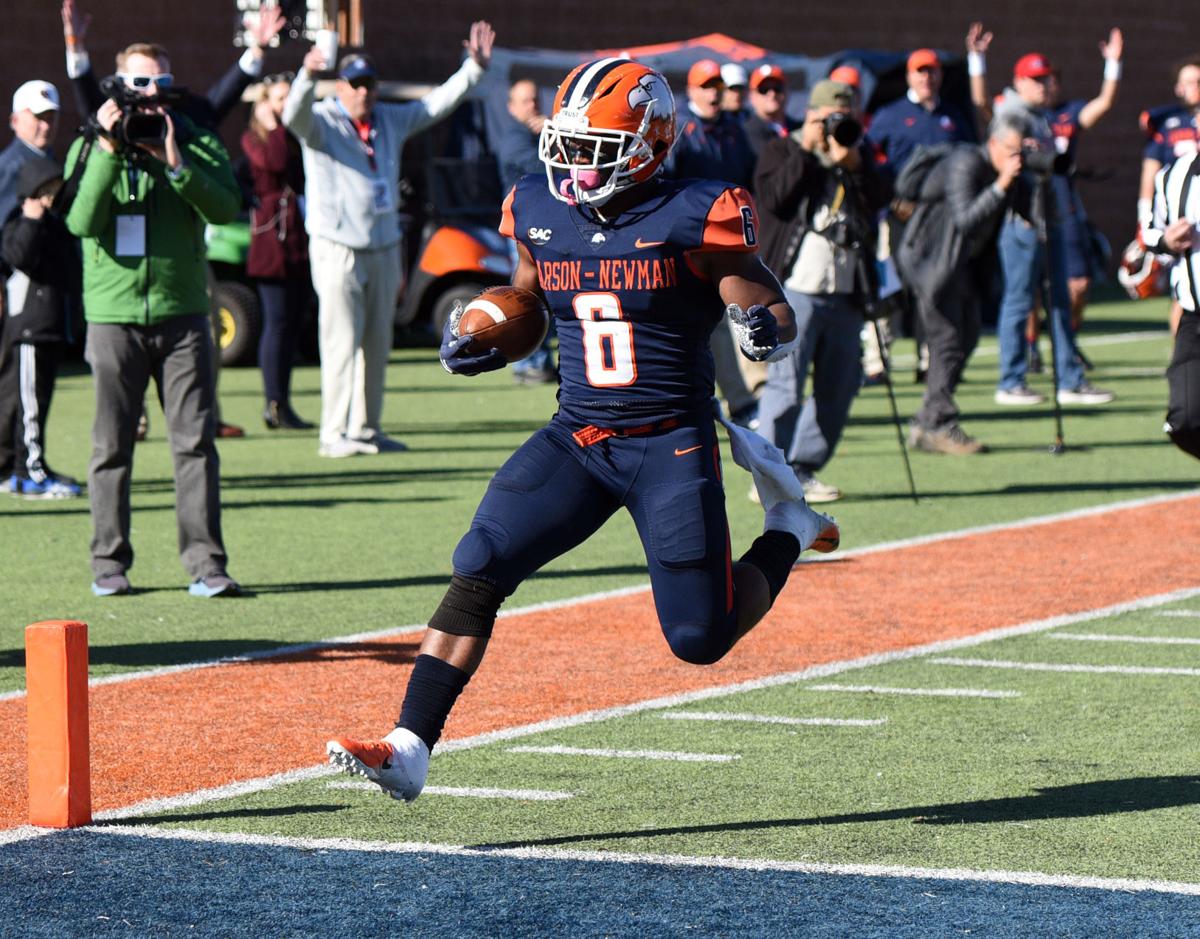 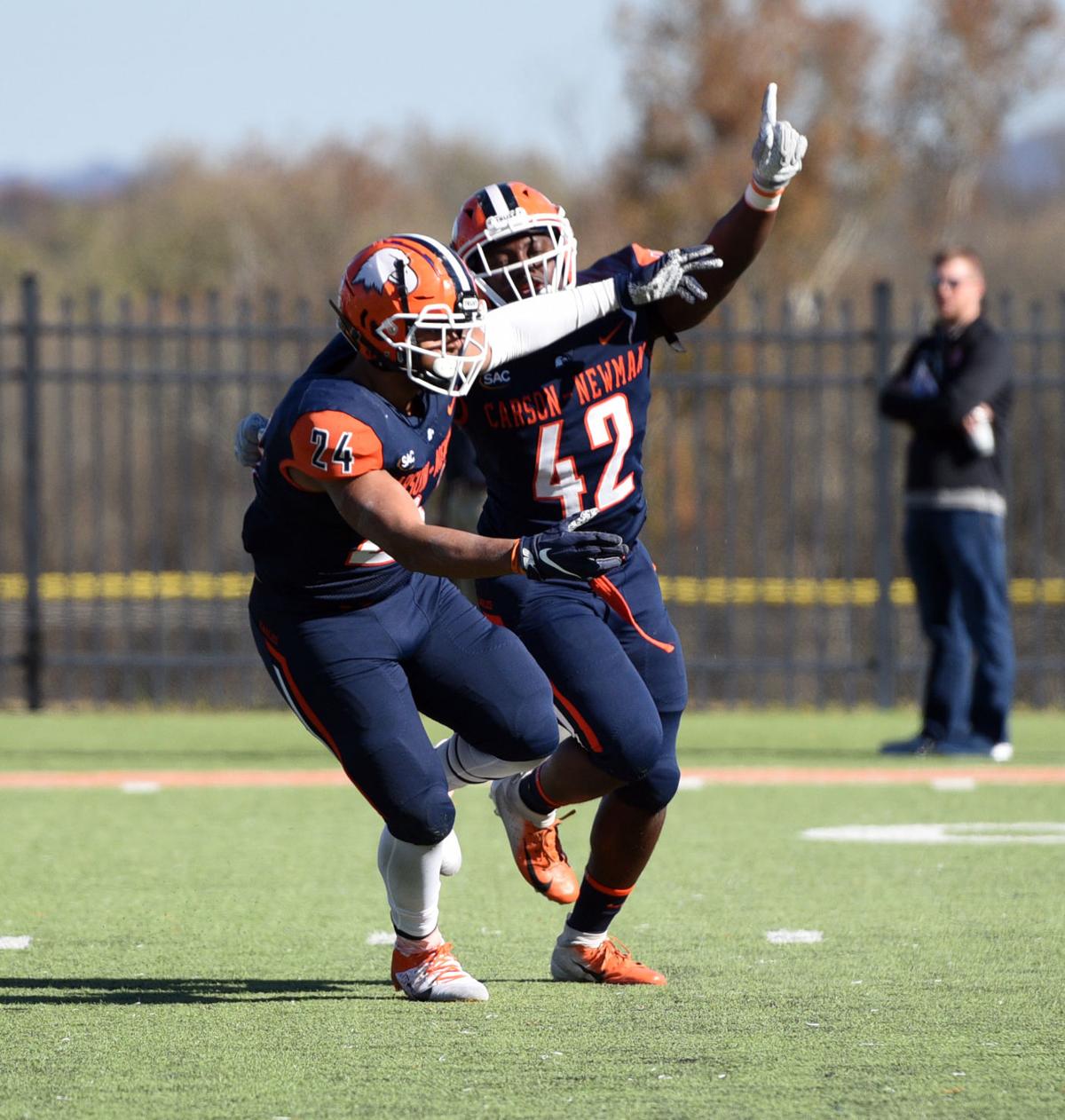 Carson-Newman running back Troy Dendy (27) dives through Tusculum tacklers to put the ball into the end zone from 22 yards out Saturday at Burke-Tarr Stadium in Jefferson City. The Eagles won 49-13 to secure a spot in the NCAA Division II playoffs.

JEFFERSON CITY — Carson-Newman celebrated in a big way Saturday afternoon at Burke-Tarr Stadium as the Eagles punched their ticket to the NCAA Division II Playoffs with a dominating 49-13 victory over rival Tusculum.

It was likely the final home game for 25 seniors who were introduced along with their family in pregame ceremonies. It was also Armed Forces Appreciation Day and the Eagles entertained the crowd of 2,599 with one of their best overall performances in a while.

Coach Mike Turner’s club scored all its points in the first three quarters and the defense completely stifled Tusculum in that same time frame.

It was the eighth win against two losses for the Eagles who will find out their playoff destination this afternoon on the NCAA Division II selection show at 5 p.m.. Under the old playoff format, the region’s fifth ranked team knew exactly where they were headed but that’s not the case now.

The top-ranked team in the region will receive a bye as usual. But the old 2-7, 3-6 and 4-5 match-ups are no longer guaranteed. The 2-3-4 teams will get home games but their opponents will be named by the NCAA with travel considerations playing the major role.

Most observers think Carson-Newman is going to travel to Bowie State (Md.). Regardless of where the Eagles go, that team is in for a battle if C-N continues to play as it did on Saturday.

With quarterback Tyler Thackerson at the controls again, the Eagles rolled up 451 offensive yards, with 336 on the ground and 115 in the air.

Fittingly, senior star Antonio Wimbush led the attack with 148 yards and a touchdown on just 14 attempts. It was his 40th career touchdown and 16th 100-yard game. Thackerson added 68 yards, scored three times and passed for another TD.

But in this victory, it was the defense that stole the show. The Eagles equaled the school record with 10 sacks led by Tray Jureidini-Wyche with 4½ and Rondrow Peebles 3½. The 10 tied the record set against New Haven in 2002.

Carson-Newman wound up holding the Pioneers, who finished 5-6 and 4-4 in the SAC, to minus-35 yards on the ground, the third lowest total all-time and first time since 2009 a team has finished with negative yardage.

The defense also set up two scores with turnovers. One came on Desmond Fairell’s 19th career interception and a fumble recovery by Wycleff Phanor led to the other.

“I thought we totally dominated in all three phases of the game,” said Turner. “We played great defensively, offensively and in the kicking game. It was probably our best effort of the season.”

He added, “It was great to see these kids do the things they’ve been working for. They just turned loose and had a good time today.

“I was proud of the way the guys kept their composure and of the way we executed what we wanted to do at the start of the game,” Turner remarked. “Our kids had a vision and a purpose about them today. With the things we had going on we were honored to be here and to be able to play like that.”

Turner was especially happy for his seniors. “For our 25 seniors, this day will always be special for them. It’s one they’ll never forget.”

Tusculum came into the game with a four-game winning streak after starting 1-5. But the Pioneers probably knew it would be an uphill battle because of the fact they’ve never won at Burke-Tarr Stadium in a dozen games. The last time Tusculum won in Jefferson City was October 4, 1934.

The Eagles took two series to get started to secure their first playoff appearance since 2015. After going three-and-out, Thackerson took to the air to lead a 70 yard drive in six plays to open the scoring.

He ran 14 yards for the game’s first first down and then fired a 21-yard pass to Romain Kelly. Two plays later he found Braxton Westfield down the middle for a 35-yard touchdown. It was Westfield’s eighth TD catch of the year, putting him in a tie for fifth on the all-time list.

Nate Craft hit the first of his seven extra points and it was 7-0 with 9:05 left in the opening quarter.

Those passes opened the running lanes and, after forcing a punt, the Eagles sailed 56 yards in 8 plays without throwing a pass. Freshman Troy Dendy, who finished with 55 yards on 8 carries, had an 18-yard run and Thackerson ran for 10 on the option.

Wimbush put the points on the board with and 18-yard rush and Craft made it 14-0.

The Pioneers finally got a first down three plays before the opening quarter ended, but had to punt again and the Eagles started their next scoring march backed up at their nine.

Wimbush had an 11-yard run in the push, but the biggest play was a 42-yard pass from Thackerson to Kelley to the TC 10. After a holding penalty, track sprinter Devon Moore took a double-reverse 20 yards to paydirt,

Late in the half, Fairell stepped in front of a defender for his interception at the Pioneers’ 23. On the second play, Dendy took a handoff up the middle, leaped over a tackler to get clear and then dove for a touchdown. Craft upped the count to 28-0 just 2:13 before intermission.

Aided by a defensive holding penalty about 45 yards from the incompleted third-down pass, the Pioneers got on the scoreboard on their first possession of the third stanza. Three plays later, quarterback Joaquin Collazo found a wide open Tory Ponder down the middle for a 35-yard TD. The extra point was missed wide right.

On the first snap after the kickoff, Wimbush stepped out of a tackle just past the line of scrimmage and went 67 yards to the one. Thackerson scored on the next play and Craft made it 35-6.

Phanor got his fumble recovery at the Tusculum 20 three plays later and Thackerson ran 13 yards to score at the 8:07 mark.

Thackerson got his third score of the quarter with 1:10 on the clock, capping a 36-yard, six-play drive with a five-yard run.

Eagle reserves played most of the final frame, but the defense kept control of the game. After its TD to start the third quarter, Tusculum didn’t get another first down until there was less than seven minutes left and that came on a penalty.

The Pioneers finally got going on offense and drove 62 yards in eight plays to score with 4:05 left. The score came as Bryce Moore connected with Ponder on a pass that covered 23 yards with Ponder fumbling at the one.

However, Jacob Moss picked up the ball and dove to the end zone.

Eli Shepherd kicked the point after to close the scoring for the day.