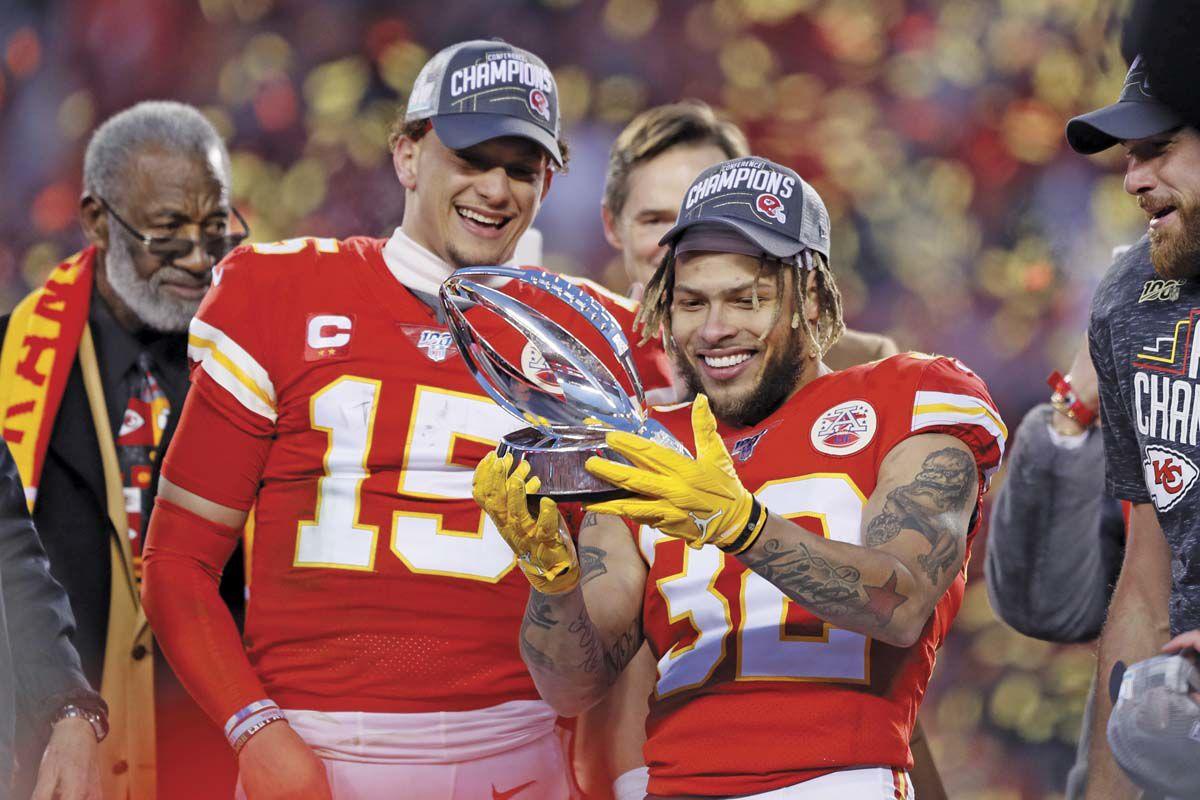 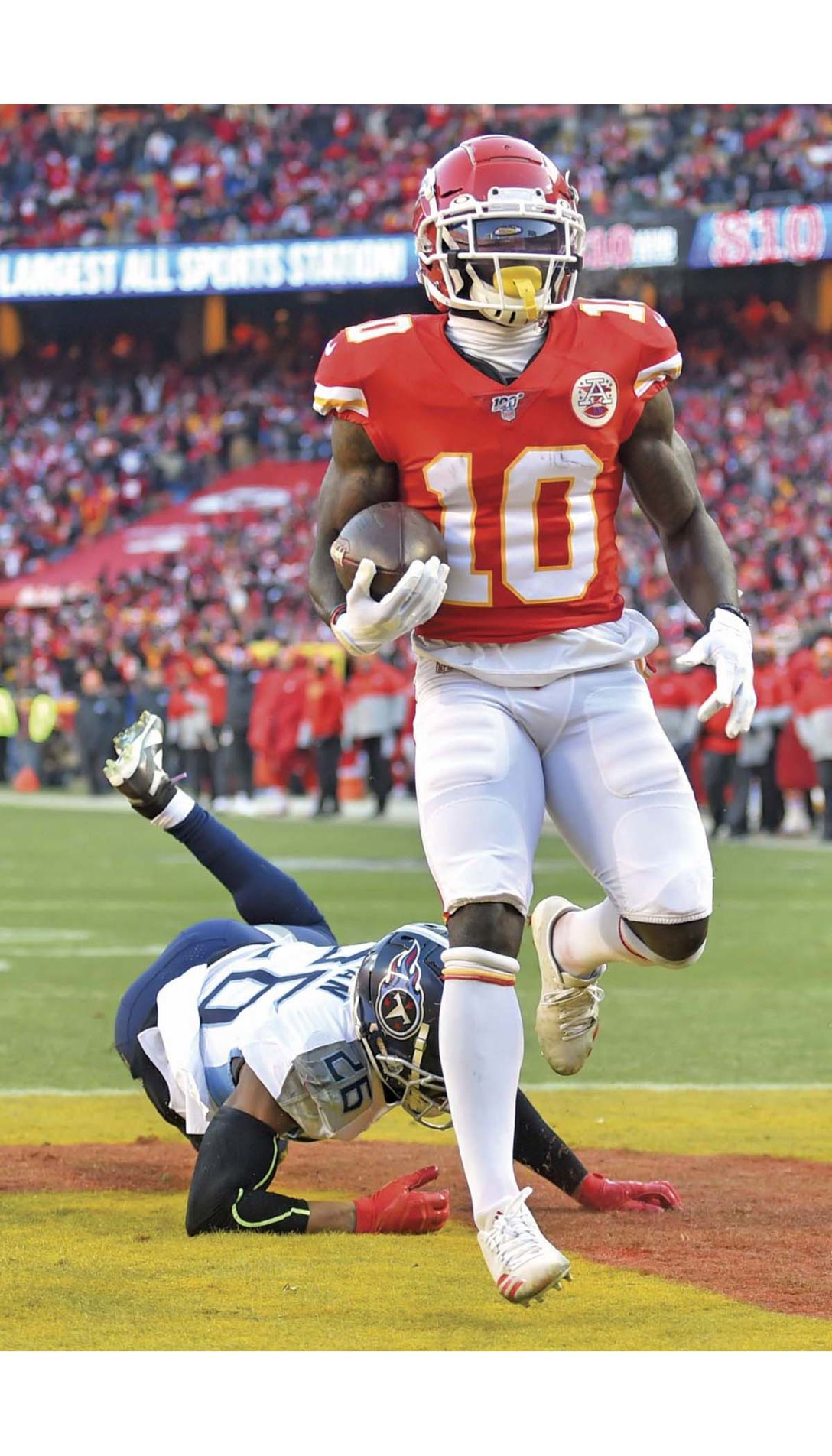 KANSAS CITY, Mo. (AP) — With his best imitation of a tightrope walker, Patrick Mahomes high-wired the Kansas City Chiefs into their first Super Bowl since 1970.

Oh sure, Mahomes did his usual superb job passing, but it was his 27-yard tap dance down the left sideline late in the first half that gave the Chiefs their first lead. From there, they outran the run-oriented Tennessee Titans and star back Derrick Henry for a 35-24 victory Sunday in the AFC championship.

At last, for the third time overall, the Chiefs (14-4) are Super Bowl bound.

In two weeks in Miami, they will play San Francisco, which rolled to a 37-20 win over Green Bay in the NFC title game.

“I mean, it’s amazing. It really is,” said Mahomes, who had 294 yards passing and three touchdowns. “To be here, to be a part of Chiefs Kingdom and to be able to do it here at Arrowhead, these people deserve it. And we’re not done yet.”

Adding to the joy of the achievement, coach Andy Reid and owner Clark Hunt accepted the Lamar Hunt Trophy — named after his father — emblematic of the AFC title.

It was handed over to them by Chiefs Hall of Famer Bobby Bell, with Mahomes and safety Tyrann Mathieu jumping for joy on the makeshift stage.

Next up: chasing the Vince Lombardi Trophy.

“Very excited and very emotional to win the trophy that has my dad’s name on it,” Hunt said. “Yeah, 50 years were too long, but we’re going to another Super Bowl.

“Chiefs Kingdom, we are going to the Super Bowl.”

The Chiefs lost in 1967 in the first AFL-NFL Championship Game — nope, it wasn’t called the Super Bowl yet — to the Lombardi Packers 35-10.

Three years later, one year after the New York Jets shocked Baltimore to lay claim to the AFL being equal to the long-established NFL, Kansas City was back. This time, it was known as the Super Bowl — indeed, Lamar Hunt is credited with coming up with the name — and his Chiefs hammered Minnesota 23-7 with the typical Wild West offensive flair and a staunch defense. Those are characteristics that helped carry KC this season.

Reid isn’t as animated as Hall of Famer Hank Stram, who famously urged the Chiefs team to “keep matriculating the ball down the field, boys.” Caught up in the moment Sunday, Reid said, “It’s awesome,” before asking the crowd to chant “How about those Chiefs?”

There will be plenty of partying on South Beach for Chiefs Kingdom heading into the championship matchup.

“Fired up to go to Miami, got to get on a diet so I can fit into my clothes,” Reid said. “Very proud.”

As they had done in their past three “elimination” games, the sixth-seeded Titans (11-8) got started quickly. The difference at Arrowhead as opposed to Houston, New England and Baltimore was that the Chiefs had Mahomes, Tyreek Hill, Sammy Watkins and Damien Williams on offense, and a vastly upgraded defense from when they lost in last year’s AFC title game. Henry was held to 7 yards rushing in the second half.

“They were doubling all these guys,” Mahomes said of his spectacular TD run on which he barely stayed in bounds. “I just ran it and got some good blocking at the end and found a way to get in the end zone.”

A week after they overcame a 24-0 deficit against Houston, the Chiefs had to rally again.

Down 10-0 and 17-7, Kansas City didn’t flinch, building a 35-17 lead while controlling the clock with a strong ground game. Naturally, Mahomes complemented that with sharp passing, spreading the ball on short and deep throws. The dagger came with a 60-yard completion to Watkins for the Chiefs’ 28th straight point midway in the final period.

Mahomes thrust both arms in the air as the crowd sang Whitney Houston’s “I Wanna Dance With Somebody.”

That somebody will be the 49ers in two weeks.

After taking a 3-0 lead on Greg Joseph’s first field goal — with Tennessee’s penchant for scoring in the red zone, he hadn’t been called upon in his previous four games with the team — the Titans got a huge break. Bashaud Breeland appeared to make a diving interception, but replay review showed the ball hitting the ground.

Helped by consecutive offside penalties and a a fourth-down pass to Adam Humphries for his first career playoff reception, the Titans converted on, what else, Henry’s 4-yard run.

Then the Chiefs got rolling, scoring on three successive series. Hill took it in on a shovel pass, later beat top Titans cornerback Logan Ryan for a 20-yard reception, and Mahomes finished the half with his brilliant jaunt down the left sideline with half the Tennessee defense seemingly expecting him to step out of bounds.

That gave the Chiefs a 21-17 lead. It went to 28-17 on Williams’ 3-yard run to cap a seven-minute drive. Then Watkins toasted Logan for the clinching long pass.

Henry was held to 69 yards on 19 carries after rushing for 588 yards in the past three games as an unstoppable force.

“I feel like our backs were against the wall the whole season,” Henry said. “But we kept on fighting and kept on believing in each other. I think it speaks volumes about the team we have. We just came up short.”

The Chiefs easily outrushed the Titans on Sunday. Mahomes led the way with 53 of those yards and also was 23 for 35 for 294 yards passing.

Reid goes back to the Super Bowl for the first time since the 2004 season, when his Eagles lost to New England. That gap is second longest to Dick Vermeil’s hiatus.

“So much effort that went into this,” said Reid, who joined the Chiefs in 2013 after 14 years in Philadelphia. “It takes an army, it is not one guy at all. I appreciate the effort by everybody.”

Last week, Henry threw a jump pass for a touchdown against Baltimore. On Sunday, Dennis Kelly emulated his coach, Mike Vrabel. He sneaked free for Ryan Tannehill’s lob, falling back awkwardly but holding on for Tennessee’s second TD. The backup tackle is the only offensive lineman since 2000 with two TDs receiving in a season. He also had one against Jacksonville.

Vrabel caught 12 touchdown passes as a linebacker, including one in the Super Bowl when his Patriots beat Reid’s Eagles.

Displaying the gambling nature of both coaches, fourth-down conversions were key on early scoring drives. Humphries, who missed the last six games with an ankle problem, caught a 3-yarder on fourth-and-2 at the KC 29. Two plays later, Henry scored.

On the Chiefs’ ensuing possession, they went for it on fourth-and-2 from the Titans 28. Travis Kelce’s 4-yard reception continued a march to Hill’s first TD.

Titans: Figuring out if they ran out of gas or were beaten by a more talented team as they head into the offseason.

Chiefs: The Tomahawk Chop will be heard at Hard Rock Stadium in the Super Bowl.