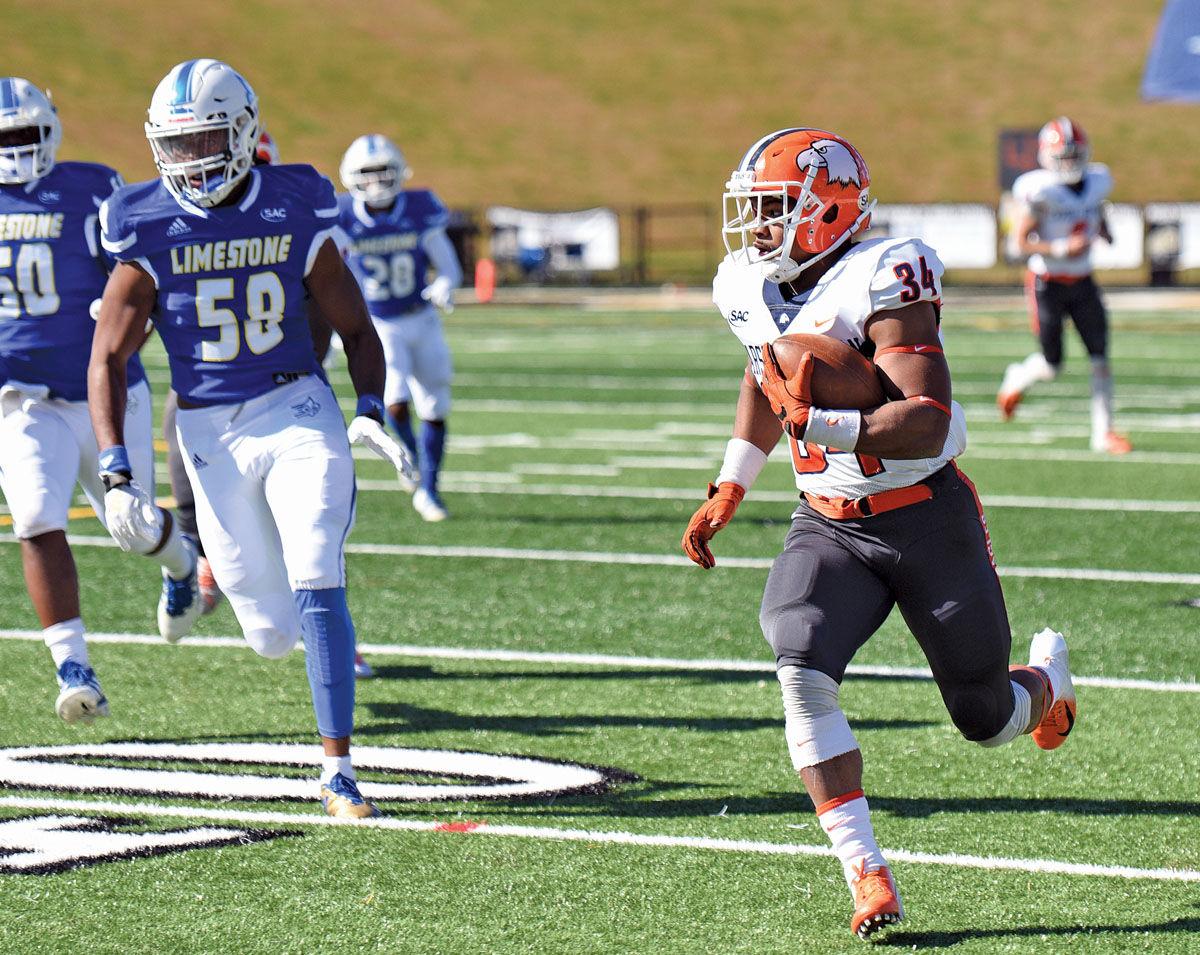 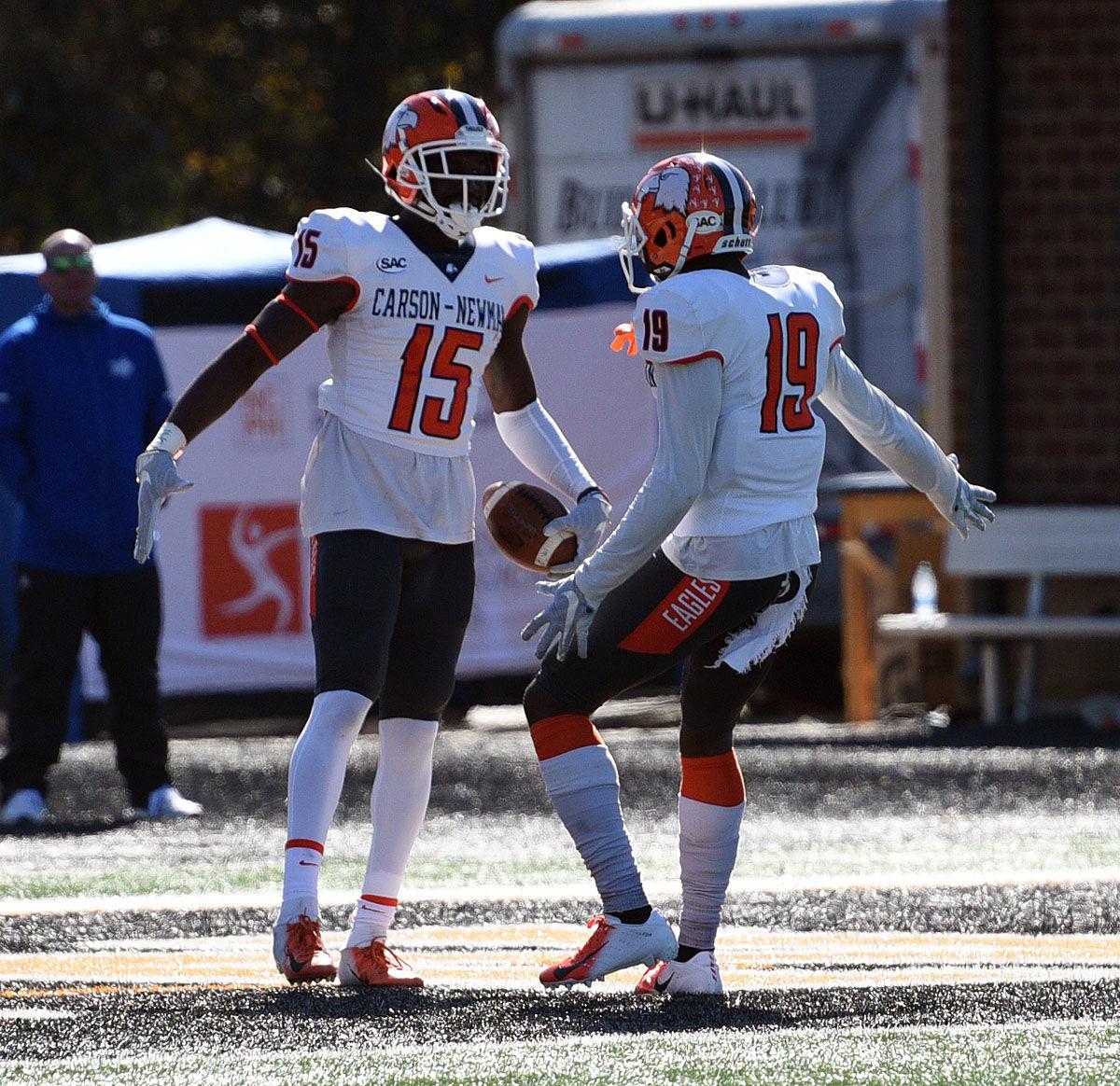 GAFFNEY, S.C. — After Carson-Newman surged out to a 24-0 lead, mistakes on offense and defense allowed Limestone to take over in the second half. A well-timed turnover and deep strike helped the Eagles come from behind to down the Saints 42-35 at The Reservation Saturday.

Carson-Newman (7-2, 5-2 South Atlantic Conference) is ranked No. 6 in the region and holds onto a playoff spot. Any stumble against the Saints (3-7, 2-5) would end that completely. Early on, it looked like that wouldn’t be a problem. The Eagles scored on four of their first five possessions, the first capped with a 58-yard touchdown pass from Tyler Thackerson, making his first start, who hit Braxton Westfield. Running back Troy Dendy reeled off the big play in C-N’s next drive, trotting 62 yards for the score.

An eight-play drive was ended with a two-yard plunge to put the Eaglese up 21-0. Nate Craft hit a 42-yard field goal to put Carson-Newman up 24-0 with nine minutes to go in the half. The Saints got on the board with a 59-yard pass from Devione Phillips to Quay Brown. With the chance to answer back, C-N’s offensive troubles began as they gave Limestone a short field on an interception, which led to a field goal. An Eagles fumble set Limestone up at the Carson-Newman 31. They didn’t waste the short field, with Phillips hitting Jerko’ya Patton for the three-yard TD pass.

“We had the turnover and they scored pretty quick, two or three snaps,” Turner said. “I think that’s momentum. Maybe if they had to drive it, it wouldn’t have been a swing like it was. You want them to earn everything they get. We let them in the end zone a couple of times too quick and gave them a lift.”

The Saints pulled within four with a 30-yard field goal from Thomas Cook to open the second half.

A missed field goal from C-N kept the score 24-20 until running back Antonio Wimbush powered into the end zone from 19 yards out with less than two minutes to go in the third.

“We got the big head being up that much in the first quarter,” Thackerson said. “I put the full responsibility on me. We put ourselves in that position. The defense helped us out tremendously. If we go out and execute and we didn’t put them in bad situations, this game wouldn’t have been like this.”

Craft hit a 38-yarder to put C-N back up seven with eight minutes to go in the game, but the lead wouldn’t hold.

The Saints struck quickly with a seven-play drive that took just a little over two minutes. Brooks split the Eagles’ defense for a 22-yard touchdown, then Alec Morton powered in for the two-point conversion to put Limestone ahead 35-34.

With no intention of giving Carson-Newman the ball back, the Saints successfully converted an onside kick to give themselves the chance to wrap the game up. Instead, C-N’s Demarkus Jones forced a fumble at their own 21 with Bernard Scott jumping on the ball.

Thackerson, on second-and-four, found Romain Kelly down the left sideline for a 50-yard strike that put the Eagles easily within Craft’s field goal range.

“I thought I overthrew him, because when I dropped back, I thought that either Romain gets it or nobody gets it,” Thackerson said. “I threw it as hard as I could on a rope and he got it.”

With 91 seconds still on the clock, Carson-Newman pushed the ball the final 13 yards, with Wimbush sliding into the paint from the three. Dendy added the two-point conversion.

C-N can punch its ticket to the postseason next Saturday with a victory over Tusculum on senior day at Burke-Tarr Stadium. Kick off is 1 p.m.