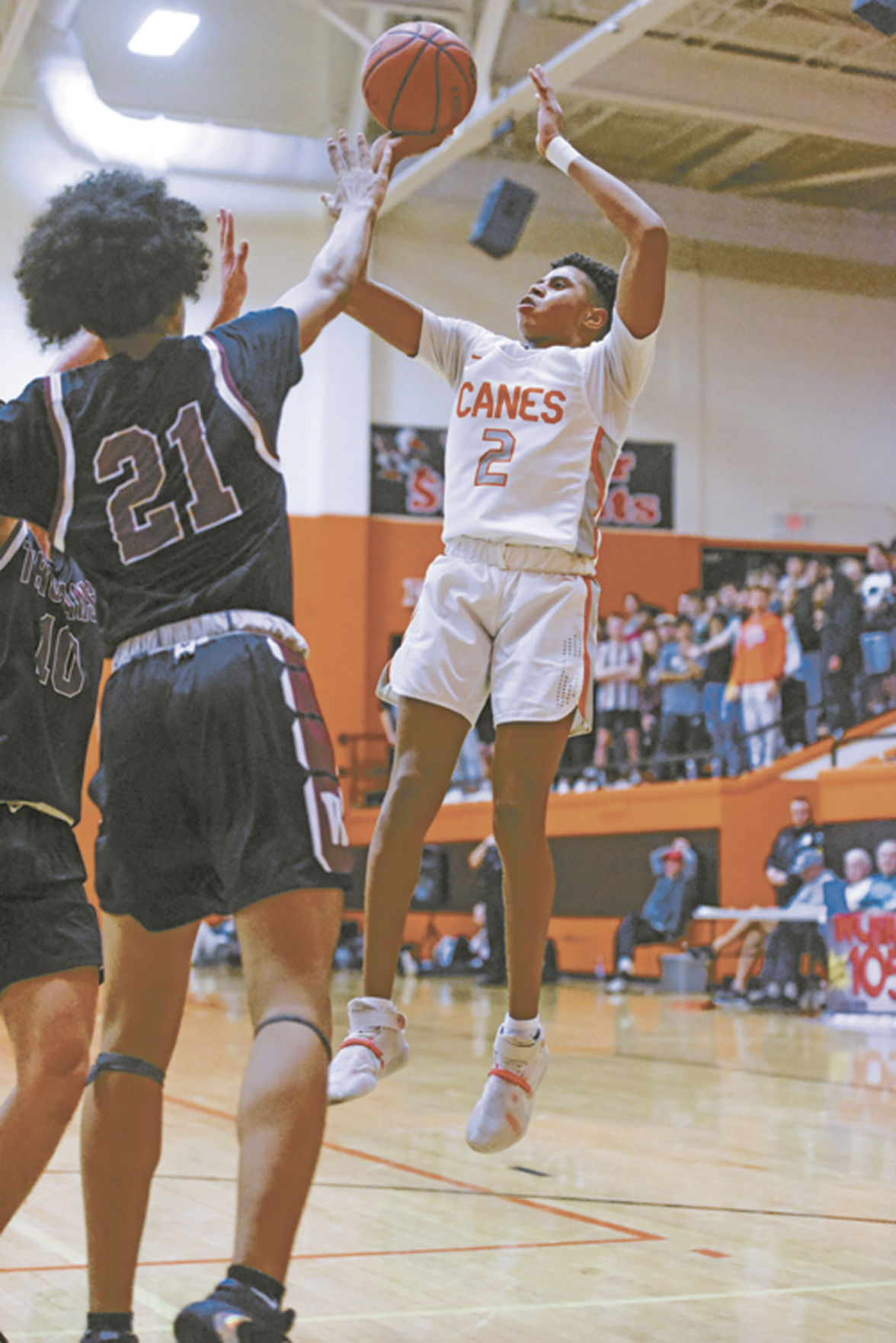 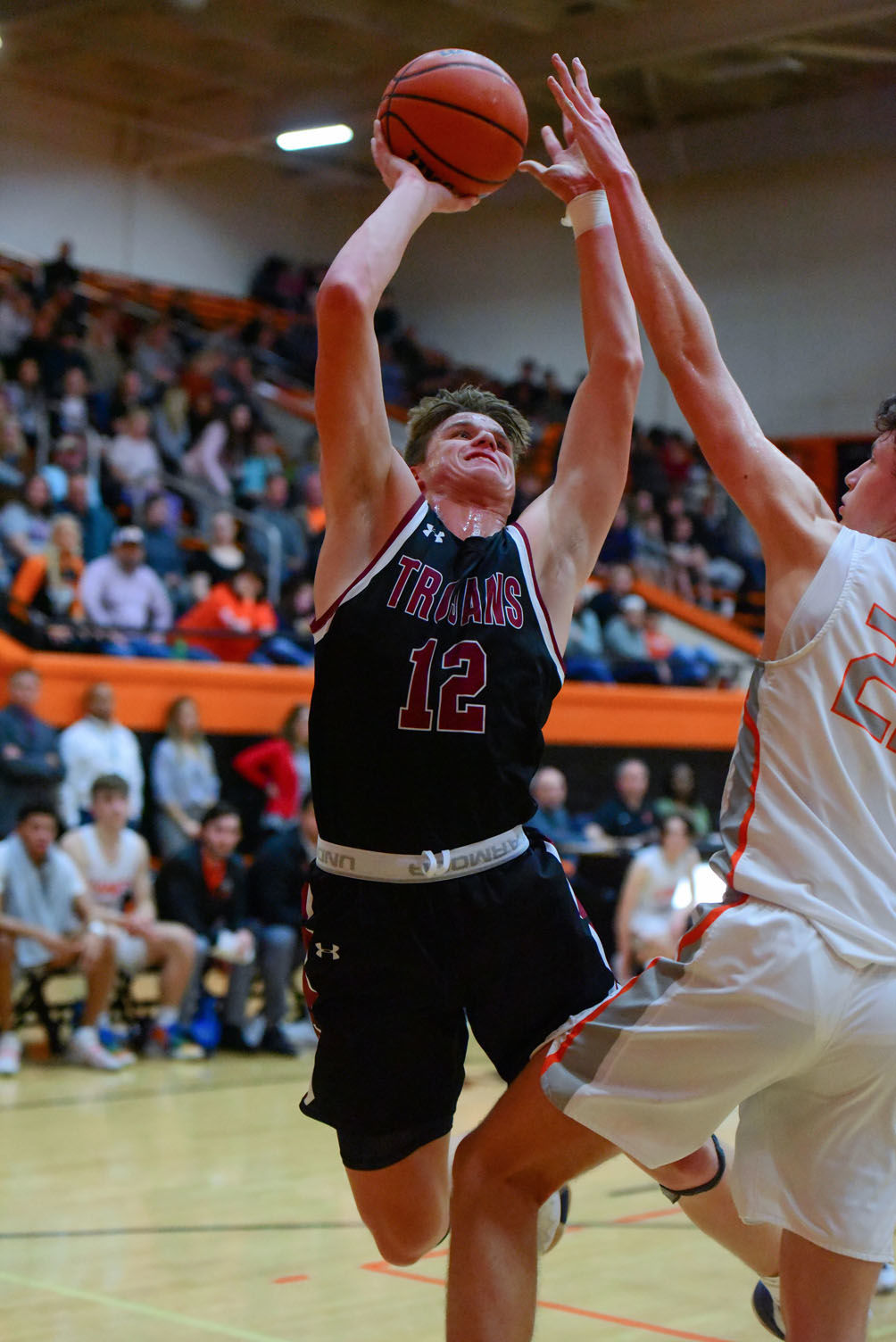 After Morristown’s two schools split their regular season meetings with each winning on the other’s home floor, most people were expecting a tight battle as East and West faced off for survival in the District 2-AAA Tournament Tuesday night at Isenberg-Siler Gymnasium.

But that wasn’t what happened.

The Hurricanes came out clicking on both ends of the floor, grabbed a huge lead right from the start and breezed to a 61-38 victory over the cold-shooting Trojans.

With the win, Coach Alden Collins’ club, now advances into Friday night’s semifinals where it will face regular-season champion Sevier County at 5:30 p.m. But, more importantly, the win gives the ‘Canes a spot in the region tournament which starts next week.

West saw its season end with an 18-12 worksheet. The three Trojan seniors bow out with 70 victories in their career, the most of any group since 2001.

Micah Simpson poured in 32 points to lead the Hurricanes to victory while Cooper Wright was the only other player in double figures with 10.

Braden Ilic added six points and raked off 13 rebounds to go along with eight blocked shots.

Senior Connor Patrick was a warrior all night long for the Trojans as he led the scoring with 11 points and pulled down a whopping 16 rebounds in his final outing. Trent Lovelace scored eight and Joey Hancock seven.

East scored the first eight points before the Trojans closed within three at 11-8 on a three by Ryan Shaffer with 3:35 left in the quarter. But East reeled off the final 13 of the period for a 24-8 lead.

The ‘Canes then scored the first two of the second stanza and, after a Trojan free throw, East gunned in nine more to lead 35-9 with three minutes left in the half.

West tried to battle back after intermission but it never got closer than 13 points.

“We did a great job on defense coming out,” said Collins. “Micah has such great length and is so athletic. He does a great job. He was able to get steals and deflections and our supporting cast is tremendous. Ryan (Harris) and Shaffer (Harville) do a great job getting in the passing lanes on the wings and Cole (Henson) does a great job at the back of the zone.”

Collins continued, “It’s designed to funnel inside to Braden and he makes it tough to get a good shot around the basket.

“We were also really good offensively at the start,” he added. “I expected us to come out with a lot of intensity after losing here earlier and that’s what we did. Micah is a talented scorer and the rest of our kids do what we need them to get done.

“I thought Cooper came in there and made some big baskets for us in that big first half,” said Collins. “But everybody contributed tonight. This was a huge win for us and we’re really excited to be moving on.”

Collins was correct in saying that everyone contributed because when the Hurricanes put their 13th point on the board just past halfway of the first quarter, every starter had scored.

West coach Jonathan Smith was obviously disappointed. “I really thought and still think we had a great game plan but we just didn’t follow it. We designed the game plan and went over it for four days but we didn’t implement that. I’ll take the blame for that because it’s my job.

“We didn’t play well on either end of the floor,” stated Smith. “We got down early and even though we battled, we never really got back in it. It was probably pretty even in the second half by terms of the boxscore but we just didn’t have any juice.”

Smith complimented the ‘Canes. “Give East the credit. Micah had a big game. They’re a really talented basketball team with a lot of potential so I’m excited for Alden and their program.

“At the same time, I’m really thankful for our three seniors (Patrick, Lovelace and Sawyer Smith). They’ve won more basketball games these last three years than in a long time.” The three won 58 in the three years and you have to go back to the group that graduated in 1992 to find a group that won more (66).

Smith said, “In that aspect of things, I think we’re changing the culture and are playing really competitive basketball. I just wish people could have watched our seniors and the work they put in to do these things. It was a really good group and I’ll always be very, very thankful for and appreciative for all they did for our program.”

With Patrick leading the way and Smith grabbing eight, West had a 46-40 rebounding edge.

After Shaffer, who didn’t play in the second half after turning his ankle in the second quarter, hit the three that made it a three-point game, Harris hit a short jumper before Ilic, Simpson and Wright all knocked down triples and then Simpson scored on a run-out and it was 24-9 at the first stop.

Simpson and Harris made one free throw each before Lovelace made one of two for the Trojans and it was 26-9. Simpson then converted a three-point play and a basket before Wright banked in a short jumper and Harris cashed in two free throws for a 35-9 margin.

Hancock hit a three and Patrick and Smith made short jump shots to get the margin down to 38-25 as East went 4:22 without scoring to start the third quarter. But Simpson ended thoughts of a comeback with a three-point play and then a long three followed by a steal and layup by Harris to shove the lead back to 46-25 with 2:58 left in the third.

West never got closer than 19 the rest of the way.

The Cherokees notched their 20th win against seven losses behind 16 points each by Kendrick Holland and Jagwan Gillette.

Jody Swann knocked in five three’s and led the Big Red with 18.

Cocke County closed the season with a 7-21 worksheet.

South-Doyle then hit free throws to pull away again at the finish.