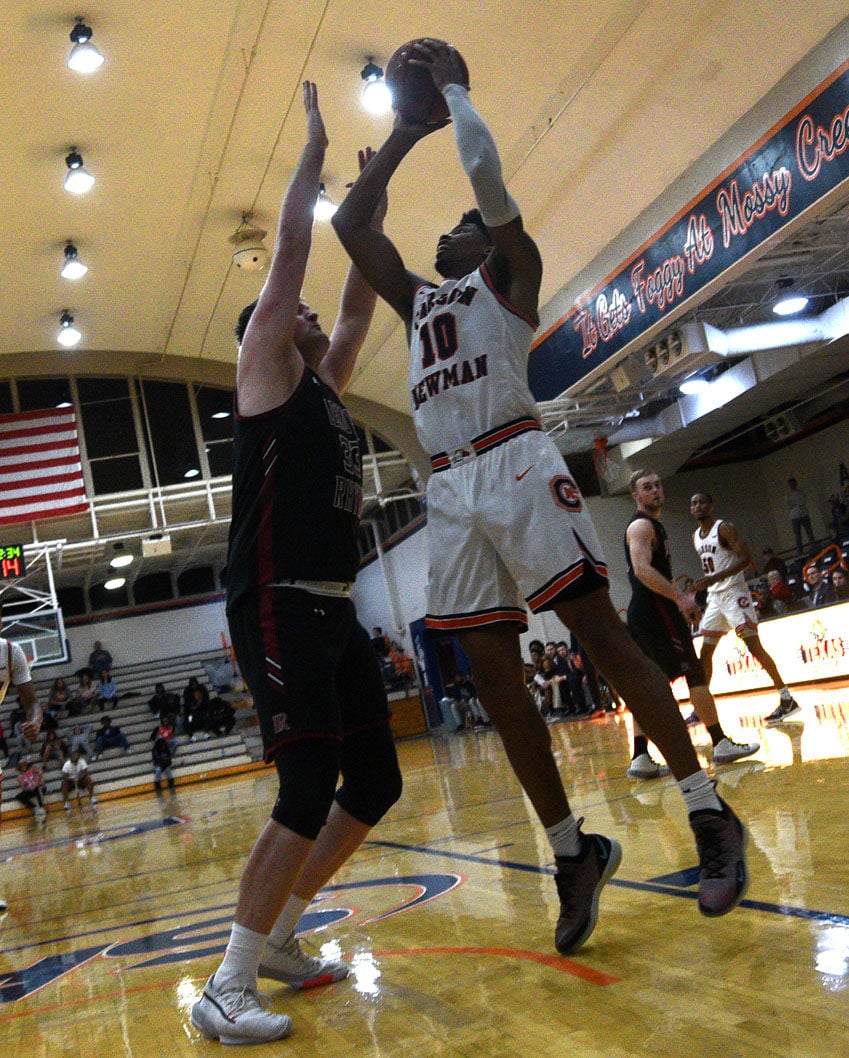 Carson-Newman’s E.J. Bush slides in to the goal against Lenoir-Rhyne Wednesday night at Holt Fieldhouse. Bush had the last-second basket that gave the Eagles the victory. 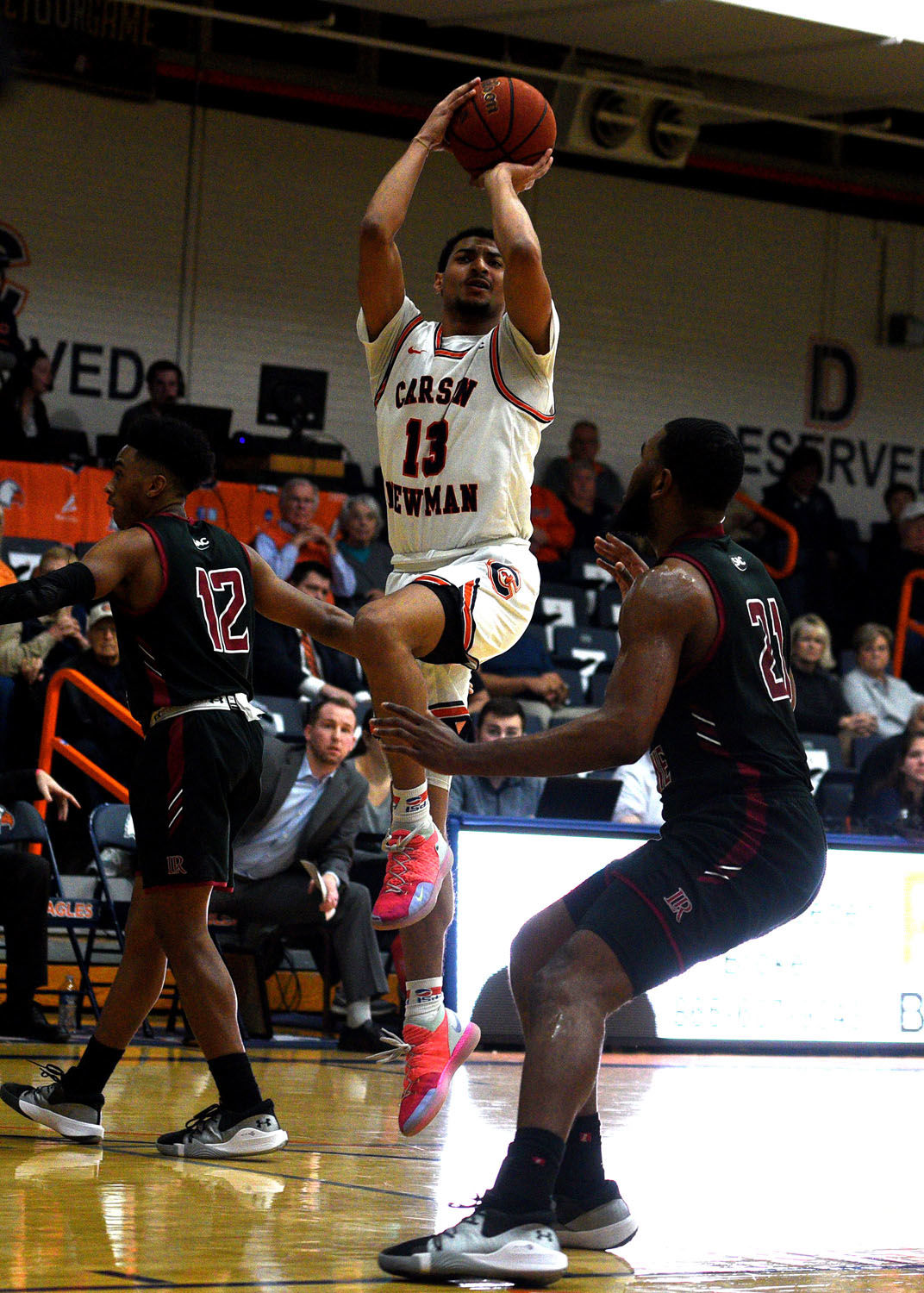 Carson-Newman’s Zailan Peeler puts up a shot against Lenoir-Rhyne Wednesday.

Carson-Newman’s E.J. Bush slides in to the goal against Lenoir-Rhyne Wednesday night at Holt Fieldhouse. Bush had the last-second basket that gave the Eagles the victory.

Carson-Newman’s Zailan Peeler puts up a shot against Lenoir-Rhyne Wednesday.

JEFFERSON CITY — EJ Bush cleaned up a Tripp Davis miss in the final second to complete a Carson-Newman comeback and get the Eagles a 70-69 win over Lenoir-Rhyne Wednesday night in Holt Fieldhouse.

Carson-Newman (9-14, 6-11 South Atlantic Conference) trailed by nine midway through the second half, but limited Lenoir-Rhyne (12-10, 8-9 SAC) without a field goal over the final 2:56 to set the stage for the late game dramatics.

“I thought our defense was solid the final eight minutes,” head men’s basketball coach Chuck Benson said. “I thought our winning time approach was there. We didn’t panic and didn’t lose focus. We did the things to give us a chance. We had multiple stops and our destiny was in our hands. We executed and ran something we typically don’t run. EJ played through the buzzer and was rewarded for it.”

The Bears had a chance to take a two-possession lead with 17 seconds left. RJ Gunn misfired a three at the head of the key and Bryant Thomas seized the rebound in the middle of the lane.

Carson-Newman called timeout once it had brought the ball front court.

After taking a screen to the left wing, Tripp Davis drove the left baseline and tried unsuccessfully to draw a foul on a 15-foot floater over Davion Bradford. Davis air-balled the shot, but it landed right in Bush’s hands. The forward grabbed the ball mid-flight, and flicked it in off the window with 0.6 ticks on the clock.

“I saw Tripp drive and thought he was in trouble,” Bush said. “He tried to pump and draw a foul. He shot it short and I thought I could go up and make a play. I caught it with both hands and was able to lay it in with my left. It was awkward, but I’m glad it went in. This was a great team win.”

Bush’s final second bucket is Carson-Newman’s fifth win in the last eight years either at the horn or in the last second. It’s the second in that span against Lenoir-Rhyne. Ish Sanders drilled a left-wing three over RJ McClure to beat the Bears at the horn on Feb. 9, 2013.

C-N didn’t lead in the second half until Bush’s bucket in the final second. The Eagles trailed for 36:46, but never by more than nine.

The Bears took 59-50 lead with 10:36 to play on the strength of back-to-back NBA-range threes from Mason Hawks. C-N used a 5-0 spurt to get the deficit back to two possessions two minutes later with back-to-back fast break buckets from Thomas and Kaleb Wallace. Carson-Newman wouldn’t get within a single possession until Davis hit a free throw to make it a three-point game with 4:42 to play.

The Eagles were able to rally with a highly efficient second-half offense. Carson-Newman made 15-of-24 shots (62.5 percent) after halftime.

“We were a little more patient after halftime,” Benson said. “Our guys were intentional about it and it generate multiple chances for us to attack in one on one situation. That’s why we were able to shoot such a high percentage.”

Davis powered C-N with 24 points. He was 8-for-12 from inside the three-point stripe with one of those misses being a virtual assist for Bush’s game-winner. He also went 5-of-6 at the charity stripe. Davis doled out three assists and played turnover free in 33 minutes. It marked his sixth 20-point effort of the year.

“Tripp got north south,” Benson said. “He is a long, rangy athlete. He’s evolved this year and gotten more comfortable. He was emphatic about our execution providing opportunities. I’m thrilled that he was able to be as intentional as he was and it pay off for him by him producing and being as efficient as he was while playing turnover free.”

Bush produced his sixth double-double with 13 point and 13 boards. Wallace rounded out Carson-Newman’s double-digit scorers with 12 off the bench on 5-of-9 shooting.

RJ Gunn led Lenoir-Rhyne with 17 points. He was 8-for-15 from the floor. Darius Simmons added in 12, while Bradford chipped in 10.

The Bears shot 48.2 percent from the field. Lenoir-Rhyne, who came in averaging 10.6 made threes per game - the second highest figure in the league, was held to eight. The Bears also were held 12 points below their season scoring average.

Offensive rebounding proved to be a difference in the game. The Bears missed 29 shots, but only grabbed two offensive boards. Carson-Newman converted all six of its second chance opportunities into points. The Eagles had an 11-0 advantage in second-chance points over the Bears.