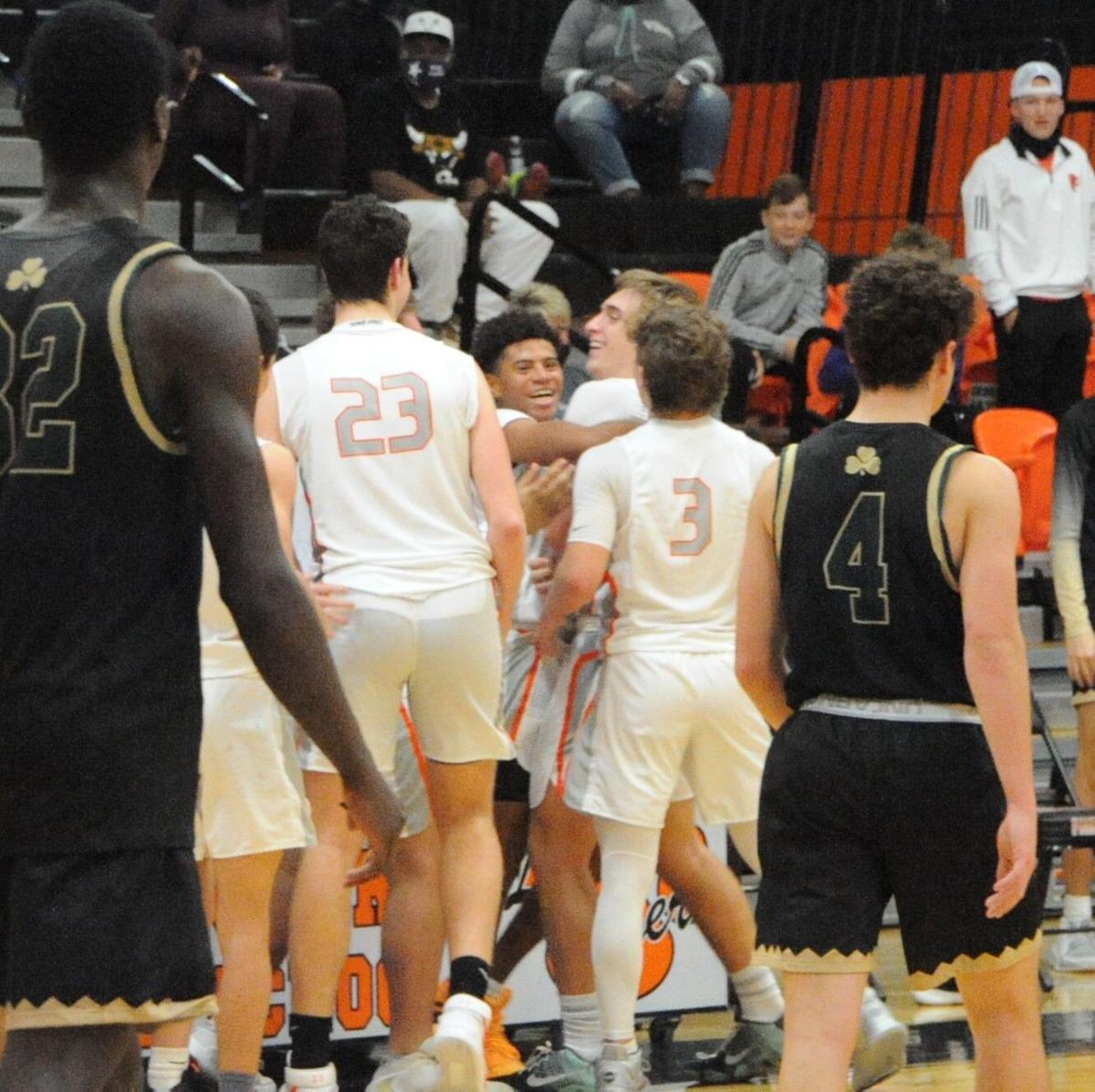 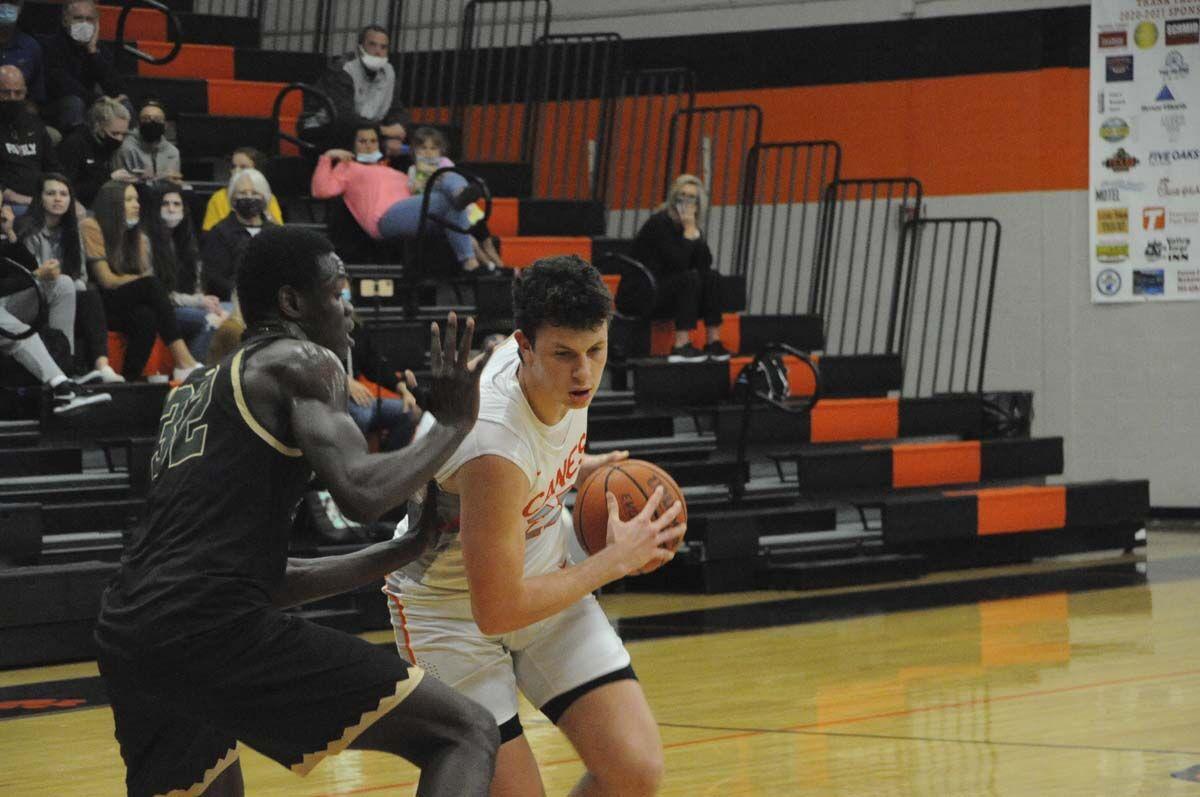 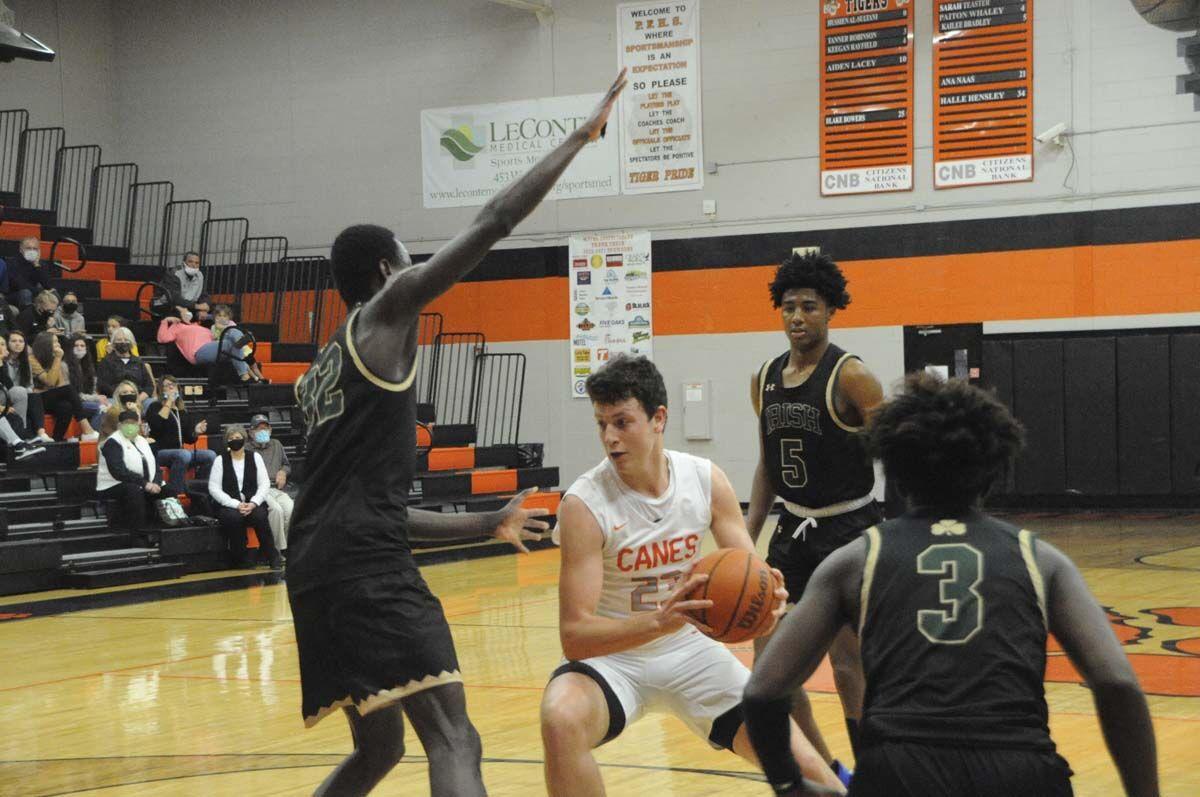 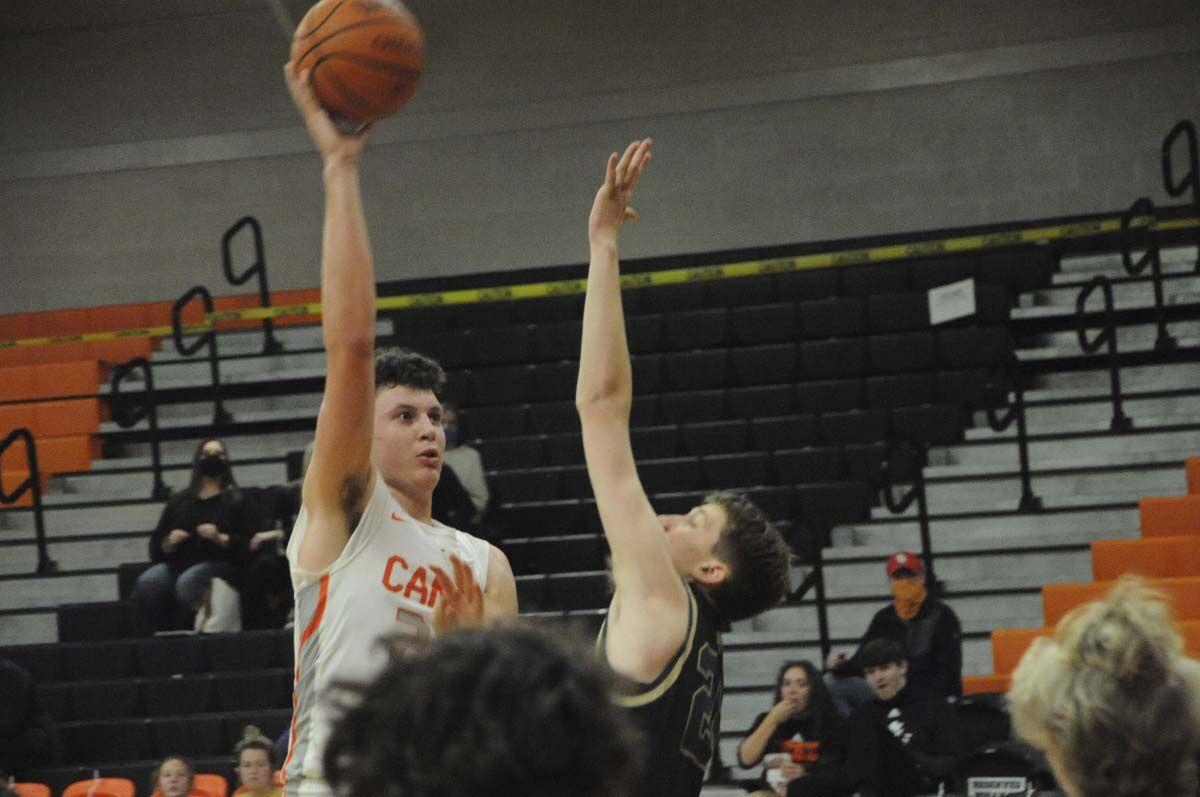 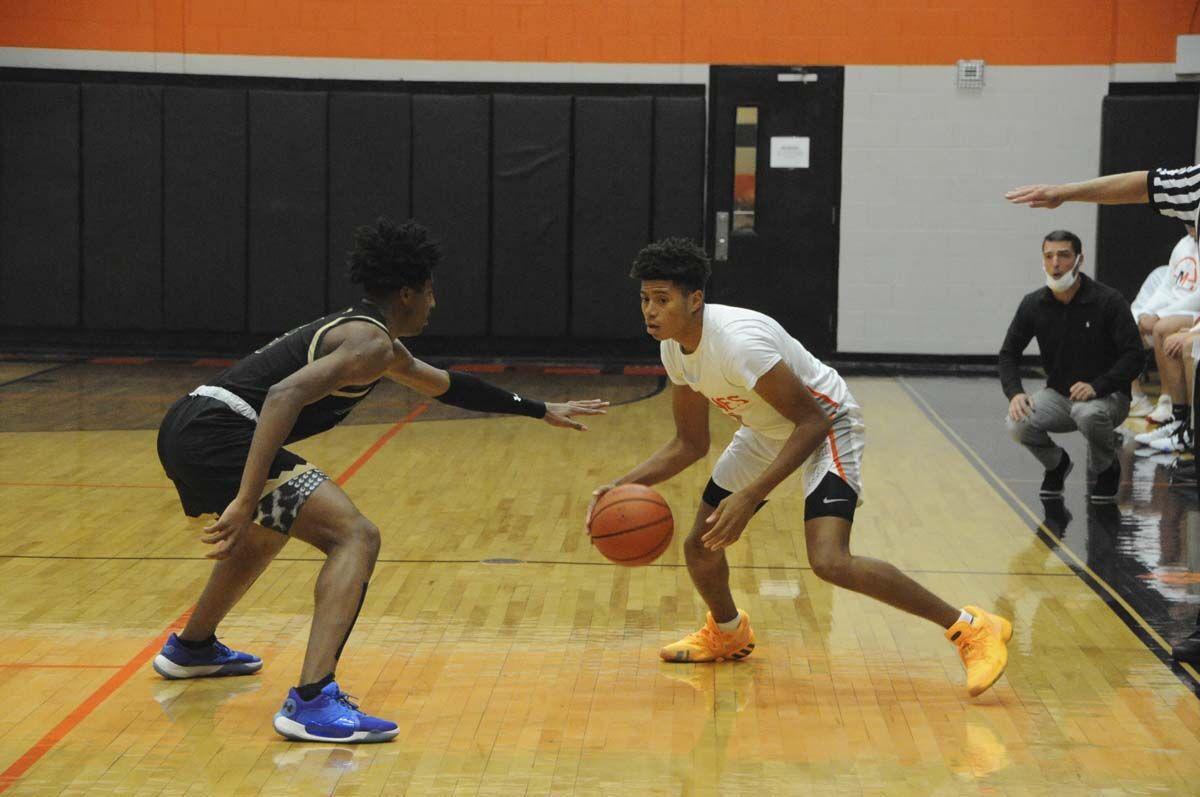 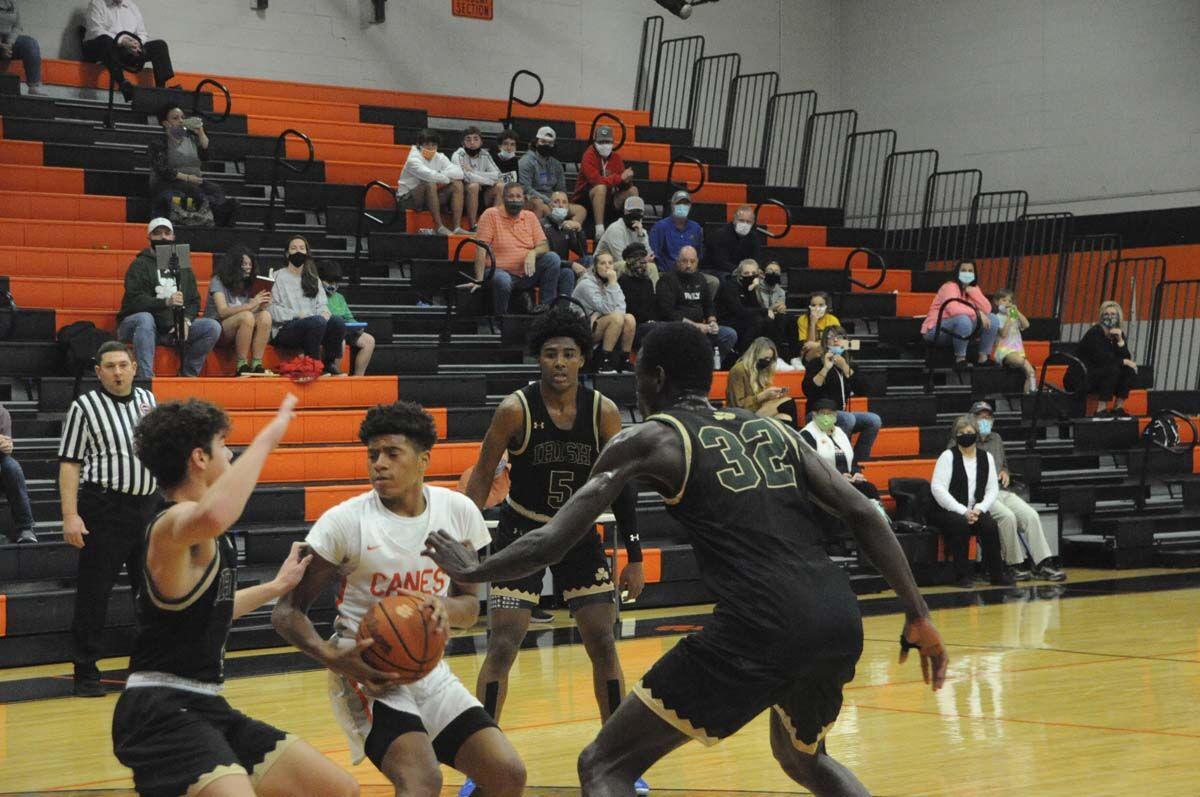 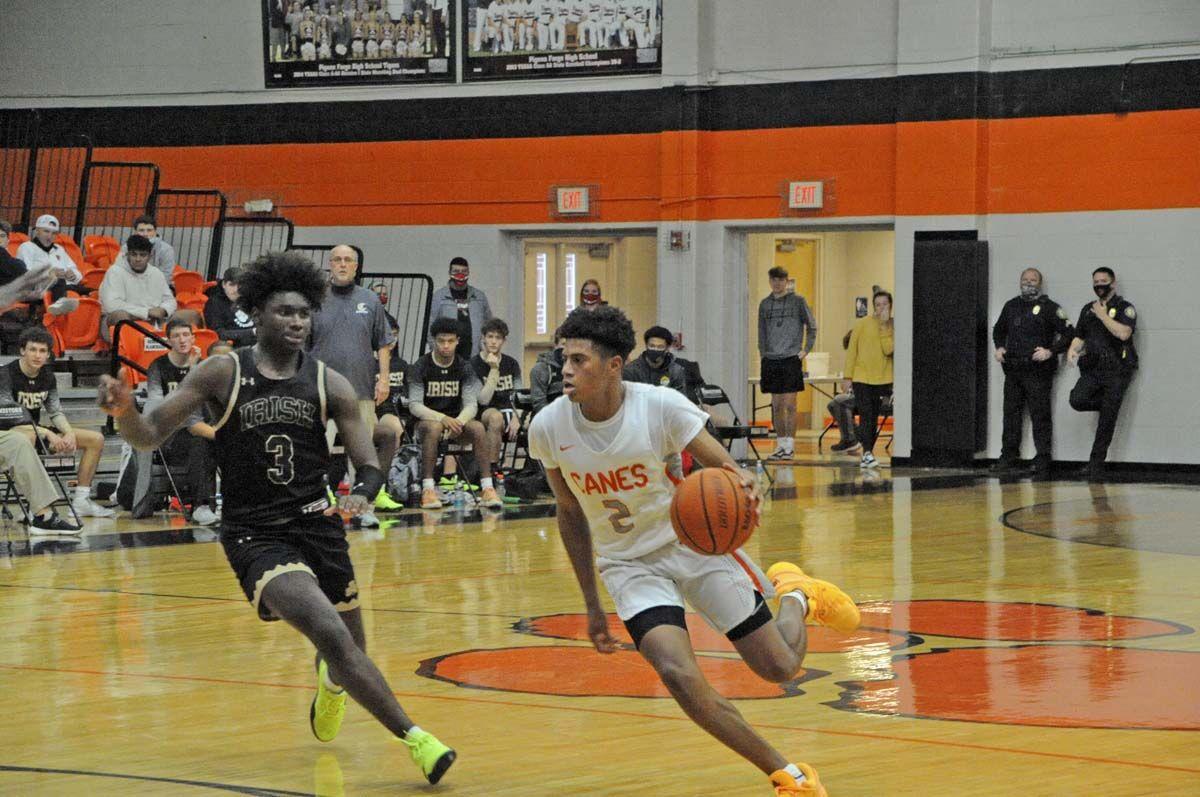 PIGEON FORGE – What a week it has been for the Morristown East boys basketball team.

On Monday, the ‘Canes came from behind to defeat perennial powerhouse Maryville.

And on Wednesday, they one-upped that.

Taking on the defending DII-AA State Champions Knoxville Catholic, who boast a handful of D-I prospects, it looked like Morristown East would come close but not close enough as BJ Edwards hit a shot with five seconds remaining to give the Irish a one-point lead.

However, East’s Shaffer Harville had other ideas.

With the clock approaching zero, Braden Ilic heaved the ball down to Harville under the hoop. Harville calmly saw 7-foot Handje Tamba running at him and didn’t panic, throwing in a reverse layup as the horn sounded to give the Canes a 46-45 victory.

“I just saw their guy coming down the lane and knew I had no time left so I knew I had to shoot it either way and just hoped I didn’t get pinned,” Harville said. “I just got it off before he got off there. It makes me feel great.”

The play could not have been made without multiple key pieces, including Ilic who about didn’t see Harville all alone under the hoop.

“I actually caught the ball and about shot it from half-court,” Ilic said. “But Micah (Simpson) started yelling at me that Shaffer was open, and I threw it to him and he made the layup like he always does.”

With the win, East improves to 3-2 and is on a three-game win streak.

While the win itself was big for the team and the players, this whole week has also been a huge step forward for the Morristown East basketball program, taking down two top programs in the area.

“Hopefully, this is just a lot of momentum moving forward,” Collins said. “We’re just happy to be playing at the moment and are just thankful. We’re going to ride it out for as long as we get, and we’re just happy for the opportunities.”

The win could not have come without the defensive effort from the ‘Canes. Despite the athleticism from Catholic, East held them at bay on the offensive end and didn’t allow any second chances for Catholic, boxing out every time down the court.

Coming into the game, Catholic was averaging 66 points per game, however, they scored 21 points below that on Wednesday. East also used these defensive stops for quick buckets in transition.

“It was a fantastic defensive effort, and I think that is what got it started for us,” Collins said. “We were able to once again break loose and get some transition points and then just contest every shot. I thought we did a good job of contesting shots and closing them down with boxouts against a team that has incredible length and athleticism. That’s huge for our guys.”

Ilic led the way for East with 16 points. It was an odd game for Ilic, who stands at 6-foot-10, as he was not the tallest player on the court. That didn’t seem to faze him though as he kept East in the game with nine first half points.

In the fourth, with Catholic going for the kill up five, Ilic drained a much needed 3-pointer to swing the momentum back on East’s side.

“It was a great intensity and a great game that we have been waiting on for a long time,” Ilic said. “We thought we could win the game, and we actually did. I just am proud of our guys and how we executed the game plan so that we could get this win.”

Along with Ilic, Micah Simpson tossed in 12 points, including seven in the fourth quarter.

Down four in the fourth, Simpson hit a tough and-one to make it a one-point game. Later, Simpson forced a defensive five second call with the ‘Canes down one and then made two free throws to give his team a one-point lead.

Simpson also had the task of guarding Edwards for most of the night. Edwards, a four star point guard and the No. 87 player in the 2022 class, had 17 points in the game but those points were not easy to come by as Simpson was all over him from the tip.

Simpson is just one guy on the East squad that is familiar with the Catholic talent, like Edwards, coming in having played with and against them in AAU ball. That made the win a little bit sweeter.

“A lot of our guys play AAU with them, and it’s the best in East Tennessee talent wise so it’s a game our guys were excited to see what we’ve got against the best,” Collins said. “They came out and did a good job of executing the game plan and that was to hang around. In the fourth quarter, we tried to turn it up and they did a good job of letting loose and trusting it in the fourth quarter, and we’re lucky enough to come out of it with a big win.”

After scoring the first six points of the game, East kept the pressure on, matching Catholic shot for shot and ending the quarter with a three from Ilic to tie the game at 11.

Then, in the second quarter,  the ‘Canes continued to run at the Irish and even had a three-point lead after freshman Kyle Cloninger, who had eight points, drilled a three.

“I felt a shift in the second quarter when we really started going at it and our freshman Kyle Cloninger hit a couple three’s,” Ilic said. “It helped us get it going. Cole was phenomenal tonight too and Micah was as well. I thought Micah was great.”

Catholic briefly took back the momentum in the third, leading for the entire quarter and held a five-point lead going to the fourth. That lead was extended to seven early but then Ilic made a shot and Simpson made two free throws bring it to three.

The teams traded buckets before Ilic hit a three to make it a two-point. Edwards answered on the other end with a basket, but it was the freshman Cloninger again who hit a big 3-pointer. Simpson then hit two free throws before Harville saved the day for what he said was the best moment of his basketball career.

The final quarter told a lot about the maturity of this East team. Instead of backing down when trailing by seven, East remained focused and slowly chipped into the lead.

“We have a lot of guys with a lot of confidence and experience and hopefully that will continue to develop and show,” Collins said. “Our composure was great tonight of handling the pressure. To be able to control the game and get the speed we wanted to was awesome for our group.”

East will have another big named school to take on Friday as they go up against Knox Webb at Farragut. Tip is set for 5 p.m.

“Webb plays with a lot of intensity, so we just want to come out and match their intensity with a composure that we had tonight,” Collins said. “We just need to be comfortable with the ball and hopefully get into our offense more than we were able to tonight.”