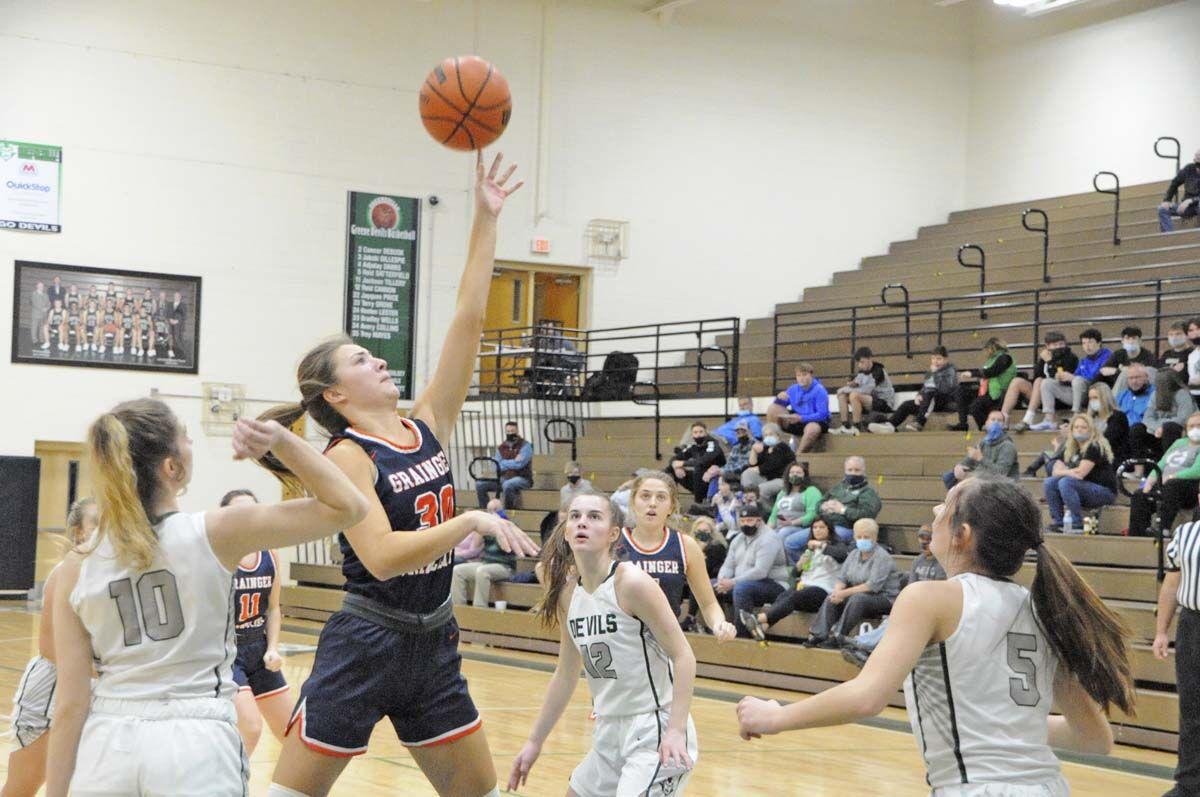 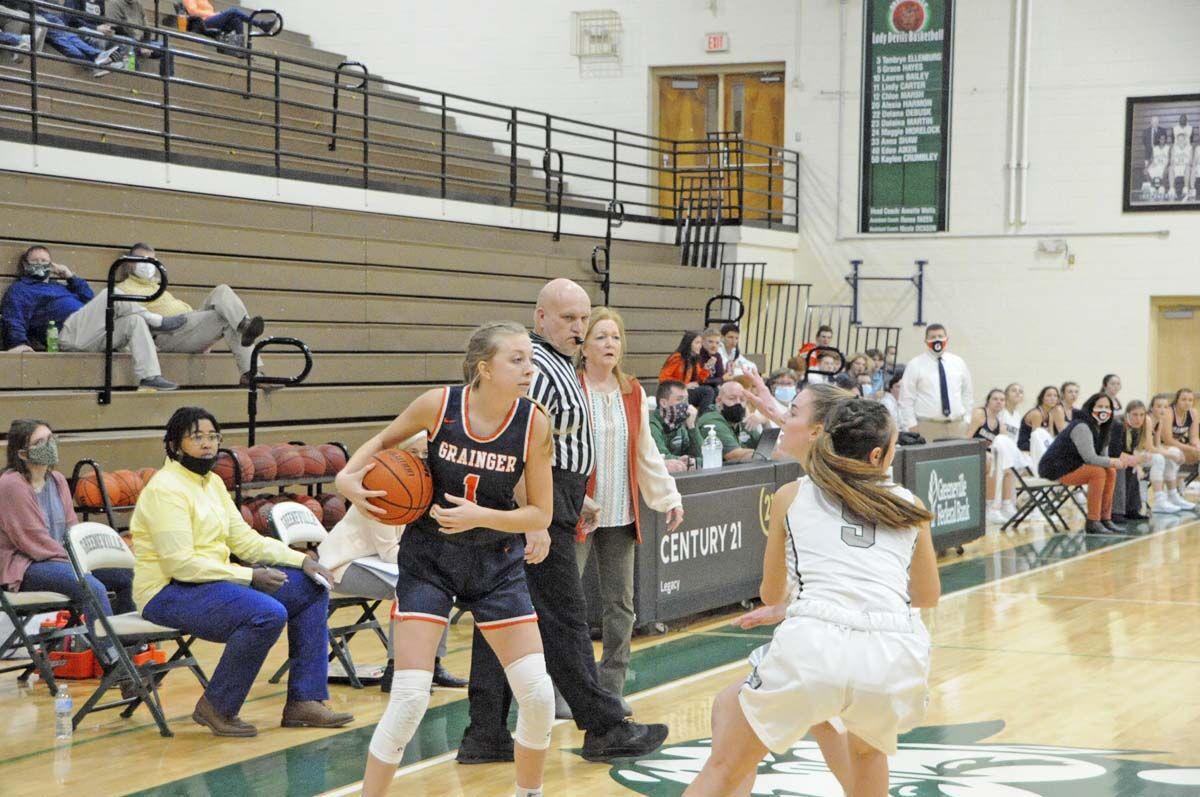 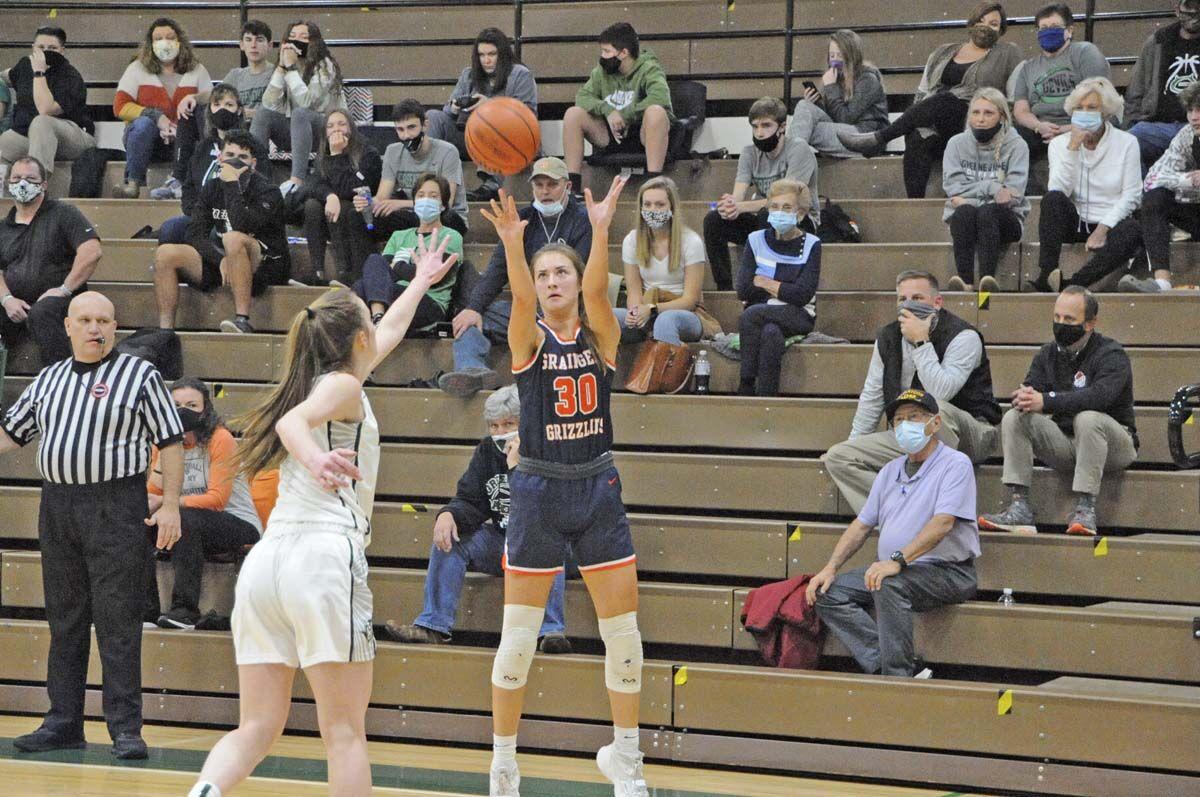 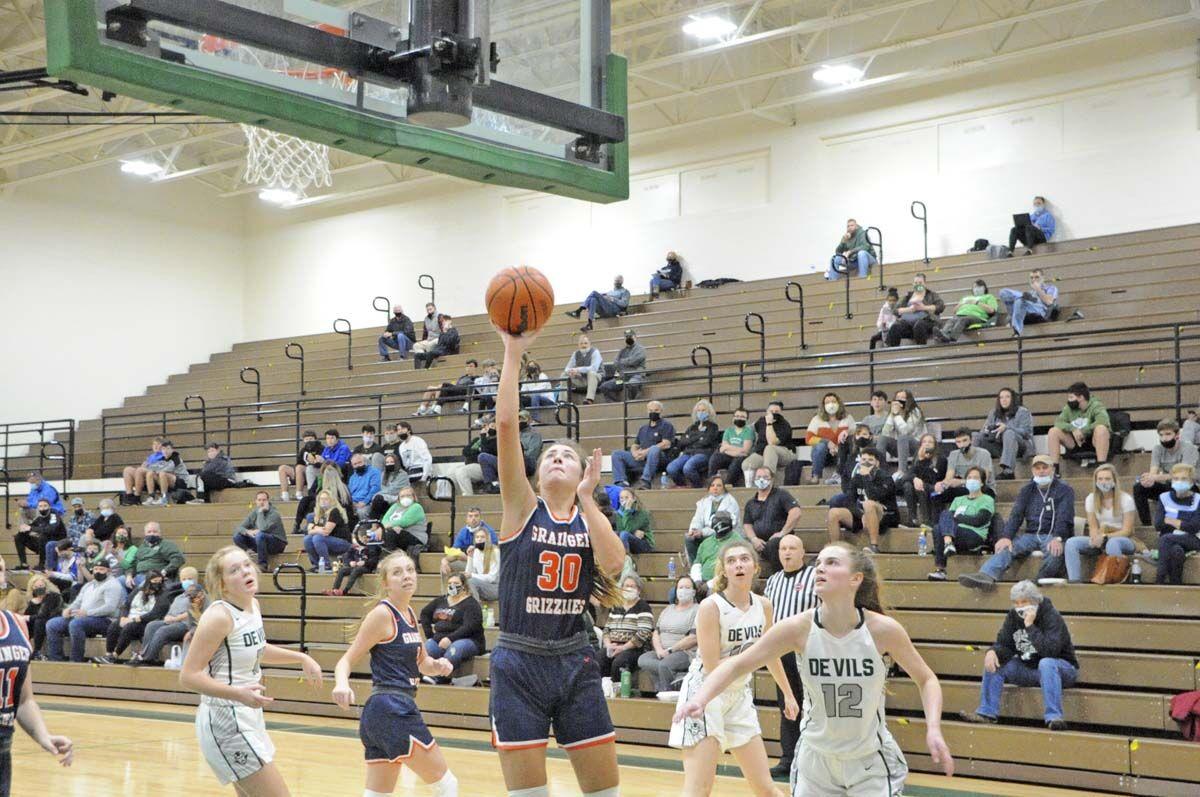 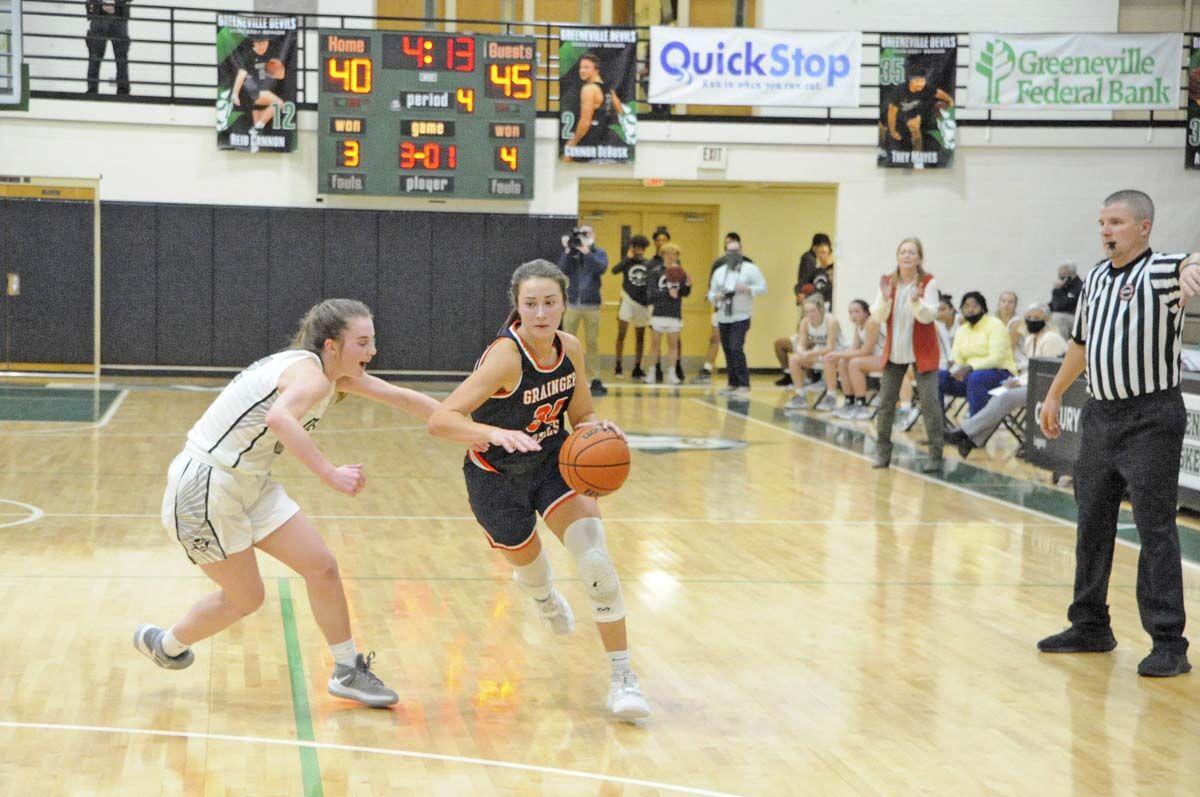 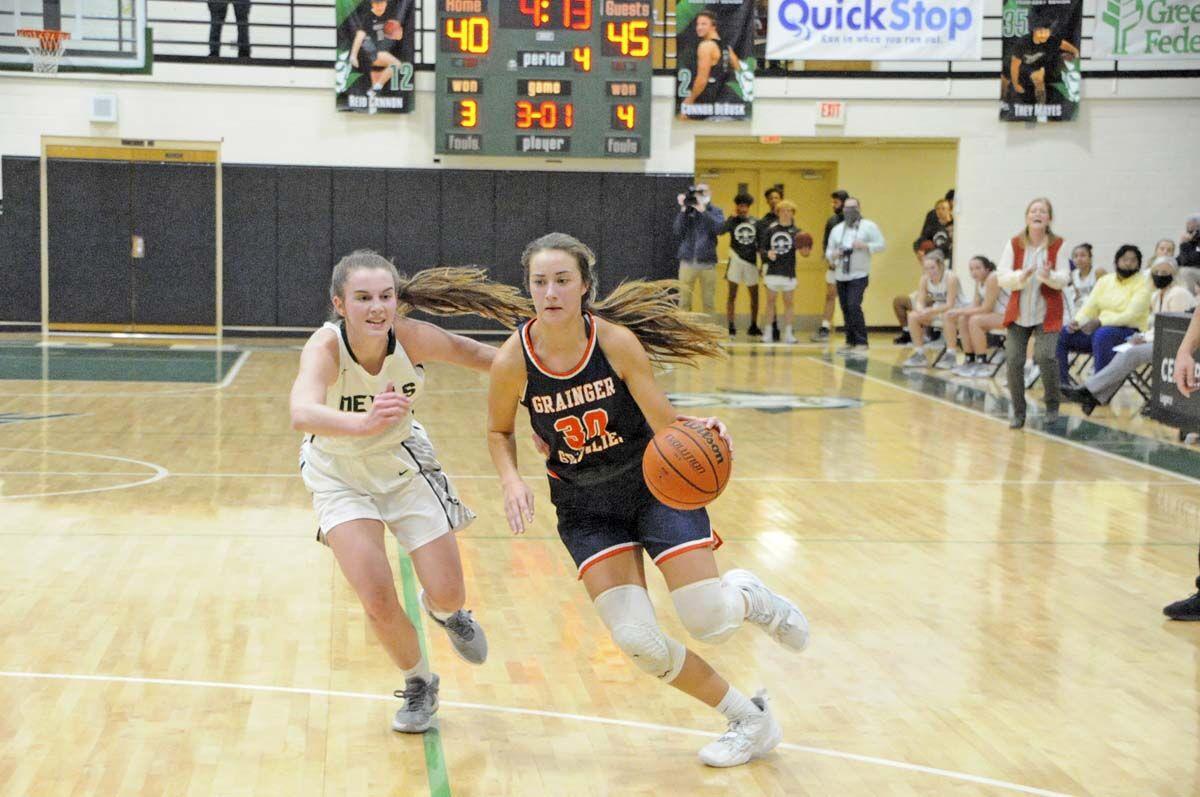 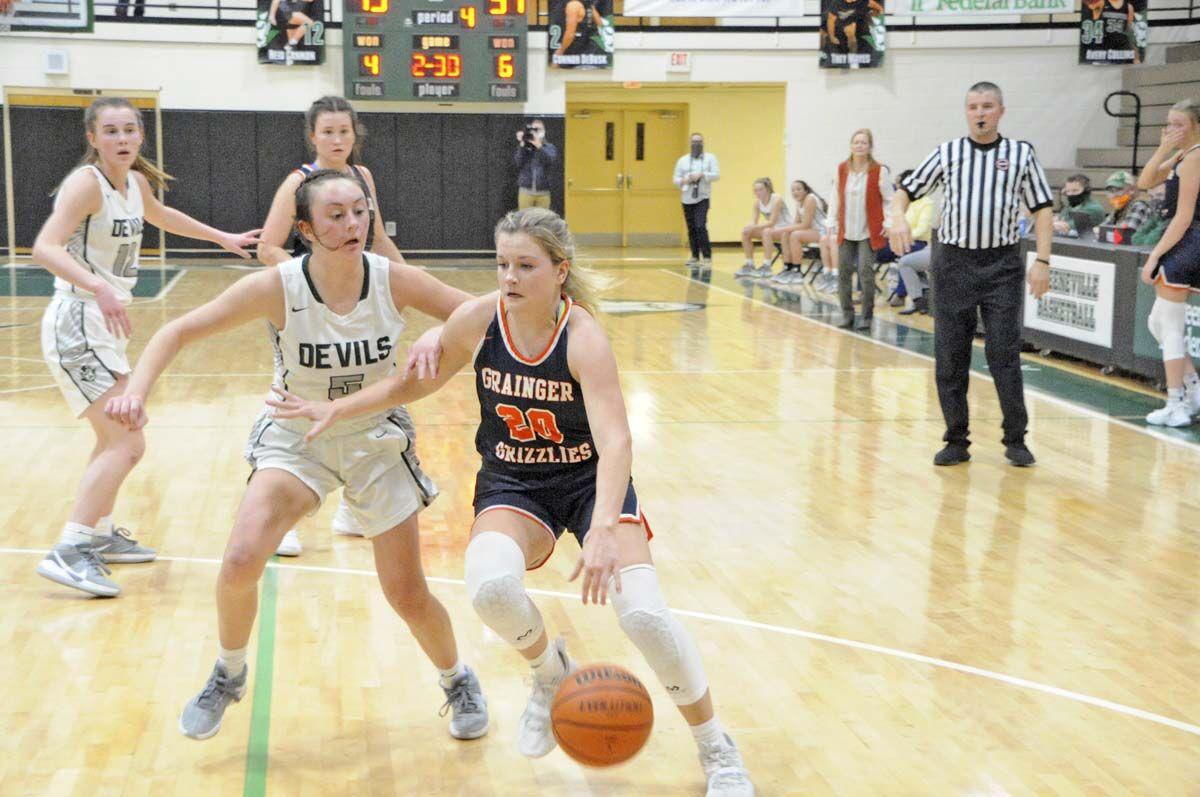 GREENEVILLE – There’s not a team in East Tennessee better at flipping the switch and taking a game over than the Grainger girls’ basketball team.

And Thursday night against district rival Greeneville, it was no different.

Up by just three with a little over three minutes remaining in the contest, the Lady Grizz flipped the proverbial switch, going on a 17-2 run to close out the game on their way to a 65-57 victory. The win improves Grainger’s record to 18-2, 7-0 in the district, and inches them closer to locking up yet another regular season district title.

“It’s like I told them before the game, we’ve played in a lot of big games, so we have to grow on that experience,” Grainger coach Rusty Bishop said. “When that winning time rolls around, we should smile and embellish it for all that experience we have. I felt we did that in the final four minutes of the game. The ball game was a whole lot closer than the score was.”

Grainger was led in the game by Lauren Longmire, who had 21 points. Just a day after signing to continue her basketball career in college at Milligan, Longmire stepped up yet again for the Lady Grizz as she has done all throughout the season. She had six rebounds as well.

“Lauren should play confident because she is a really good player,” Bishop said. “We need Lauren to be good for us for us to be good. We had a lot of people play well. If we are knocking down shots, we’re pretty hard to beat.”

While Grainger’s two other seniors stepped up per usual, Tori Rutherford had 10 and Matty Tanner had seven, Grainger’s juniors hit timely shot after timely shot to keep the lead for the Lady Grizz.

Sydnie Hayes and Audrey Stratton each had 11 points. Stratton hit three 3-pointers, including one on the teams run to close out the game, while Hayes hit two 3-pointers and went 5-of-6 from the free throw line.

“Our four juniors, two start and two come off the bench, we will only be as good as those four are,” Bishop said. “We have to have them contribute offensively. And I have told them that all year. If those four play well, we will play really well. We had three of them play really well tonight.”

While the game was close for much of the contest, it didn’t start out that way. Grainger jumped out to a 14-0 lead and prevented the Lady Devils from scoring until there was just 1:20 left in the quarter. Longmire had four in the quarter while Millie Hurst came off the bench and had five points. The Lady Grizz led 16-5.

However, as quick as they established that lead, it disappeared in the second quarter as Greeneville went on an 11-0 run midway through to tie the game at 19. The two teams traded buckets for the rest of the half and it was the Lady Devils who led by one at the break.

Coming out of the half, the two teams picked up where they left off to end the second as there were three lead changes to start. But Grainger, showing just how veteran of a team they are, began to take control and had a five-point lead going to the fourth after a three from Stratton and Hayes and a free throw from Rutherford.

In the fourth, Grainger continued to hold a slim lead until Stratton hit a three with 3:24 to go up six. After that, Longmire made two free throws and Tanner hit a shot before Rutherford made a circus layup while being fouled. Rutherford forced another turnover and converted again before Longmire hit another free throw. Longmire and Tanner each hit shots to finish the game.

Grainger will be back in action on Monday as they play at home against Union County.