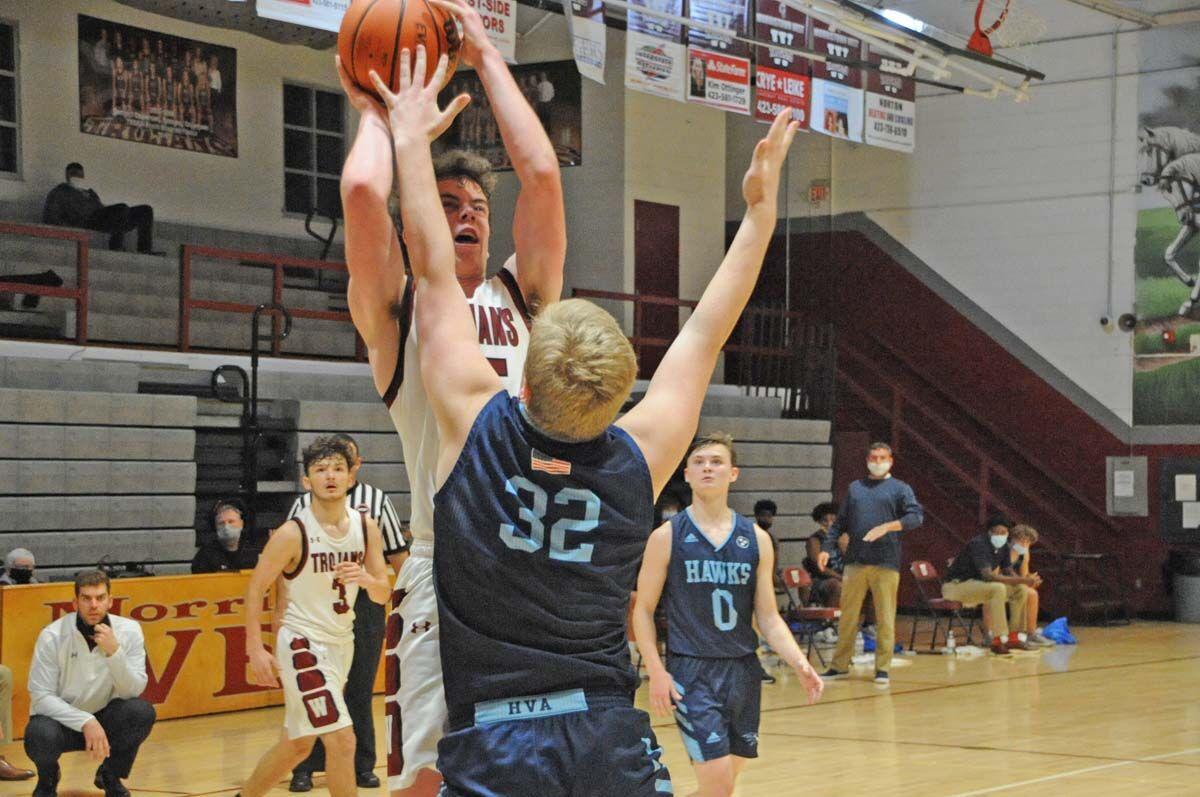 Morristown West's Joey Hancock goes up for a contested shot on Monday. Hancock led the team with 25 points. 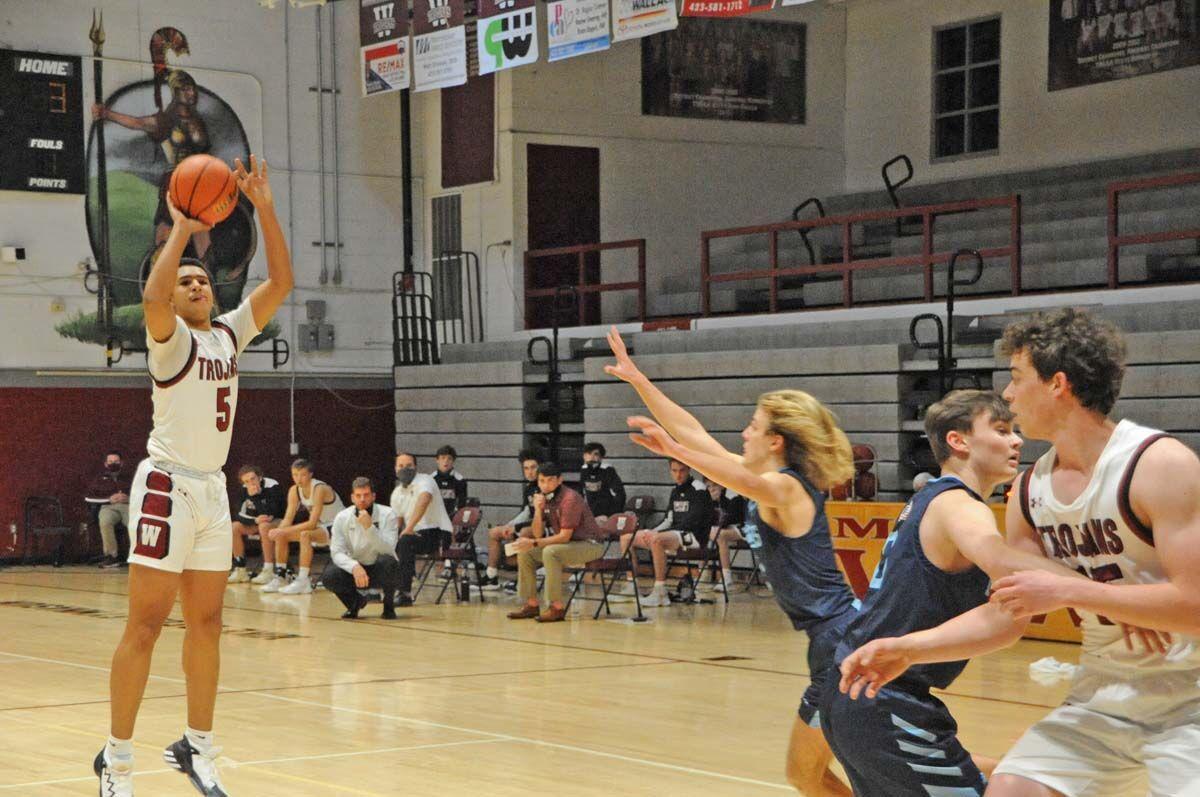 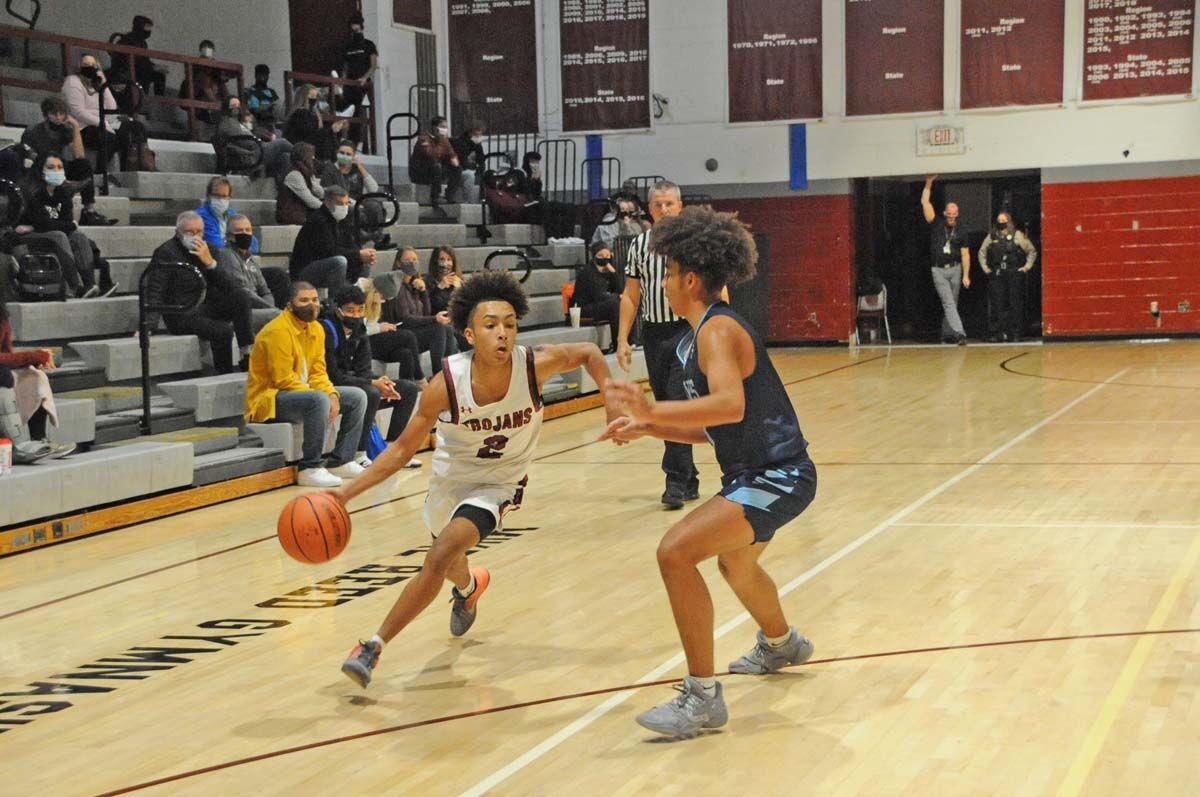 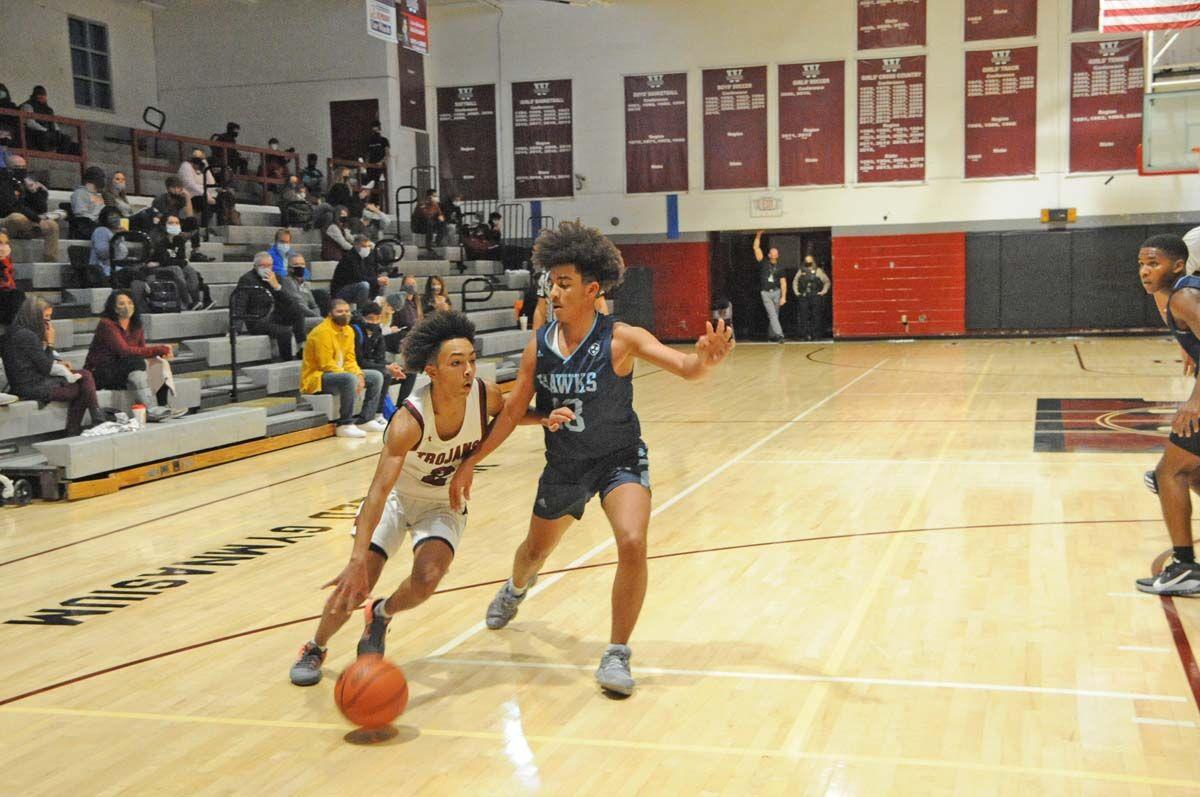 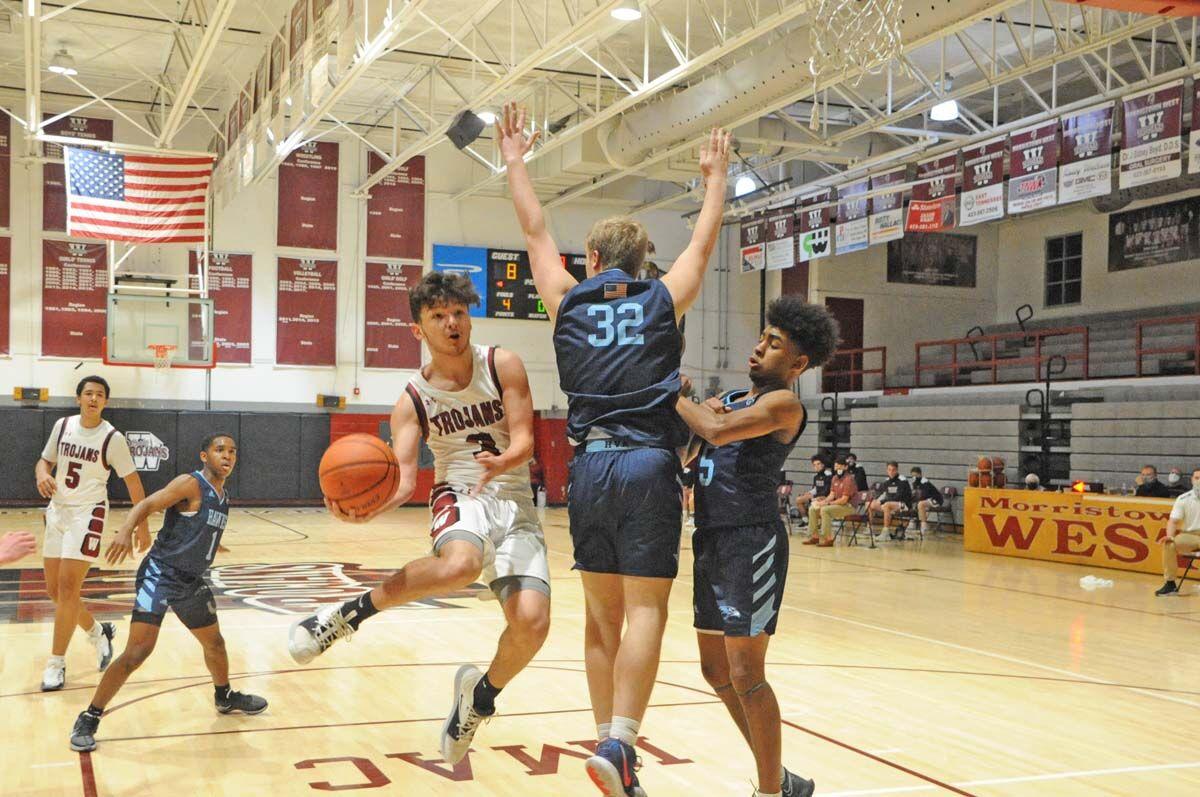 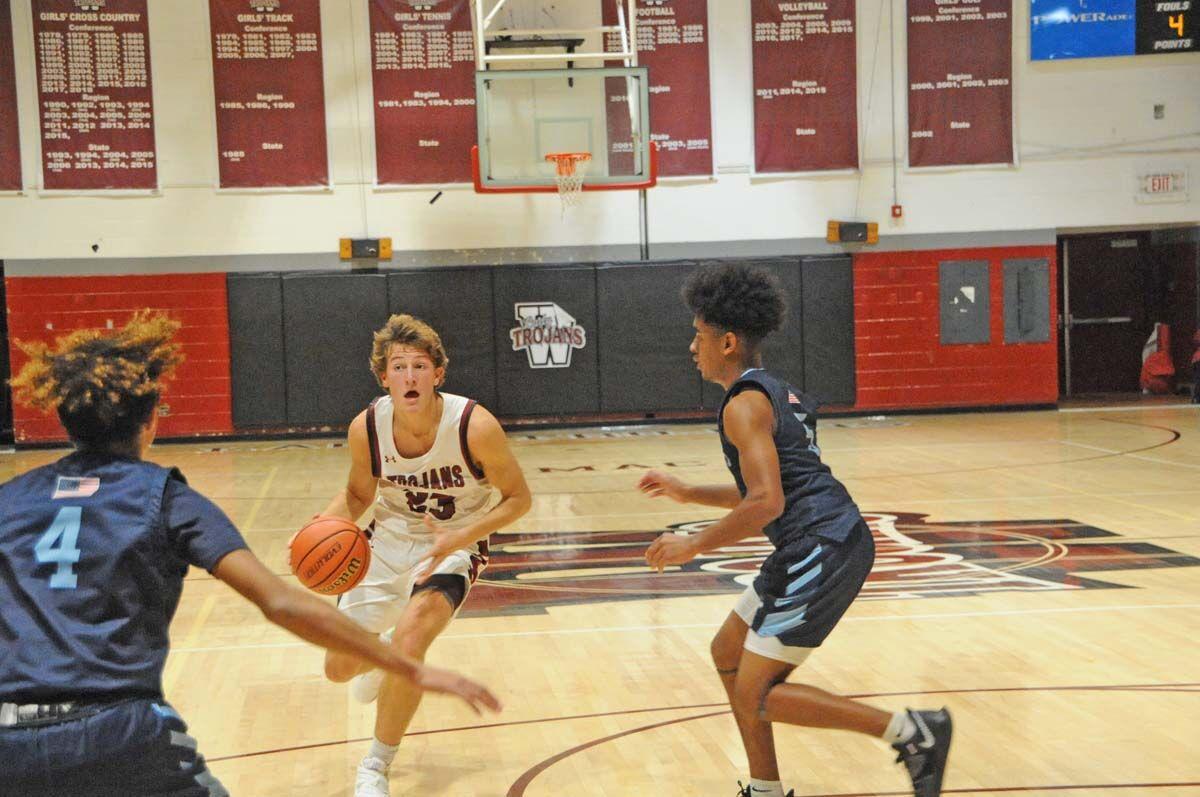 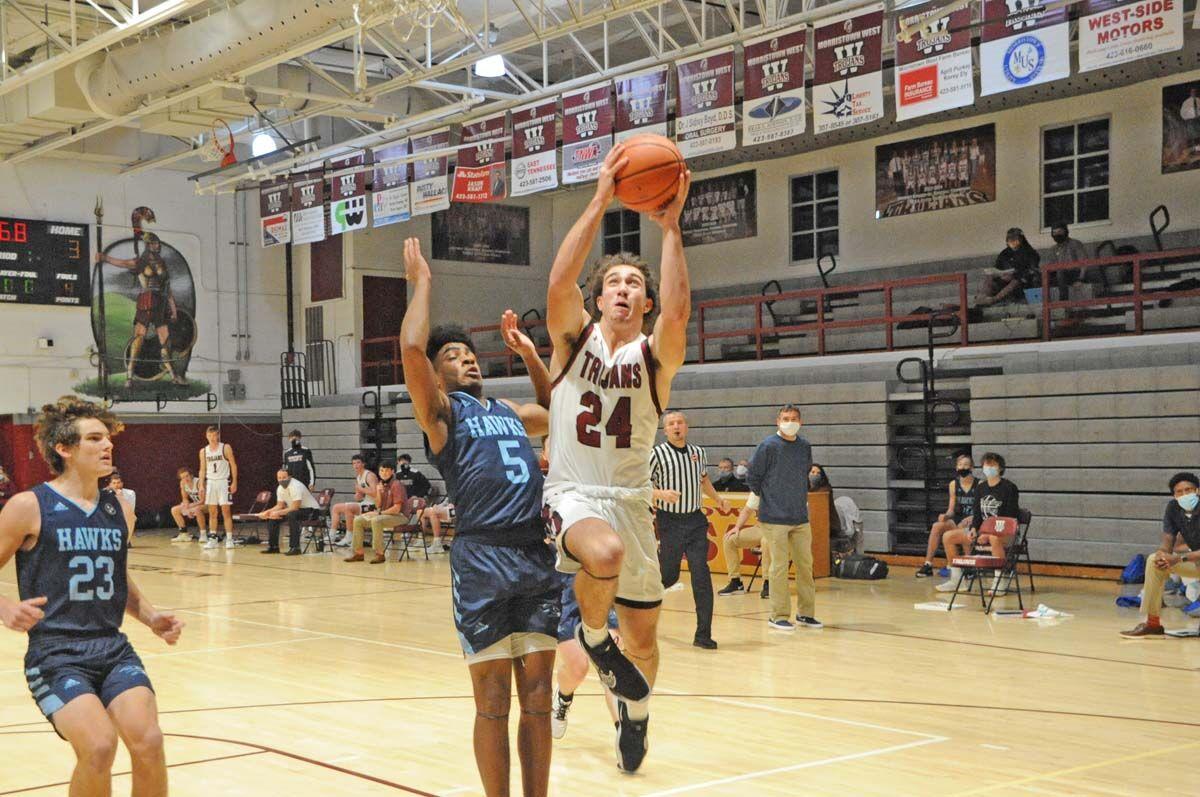 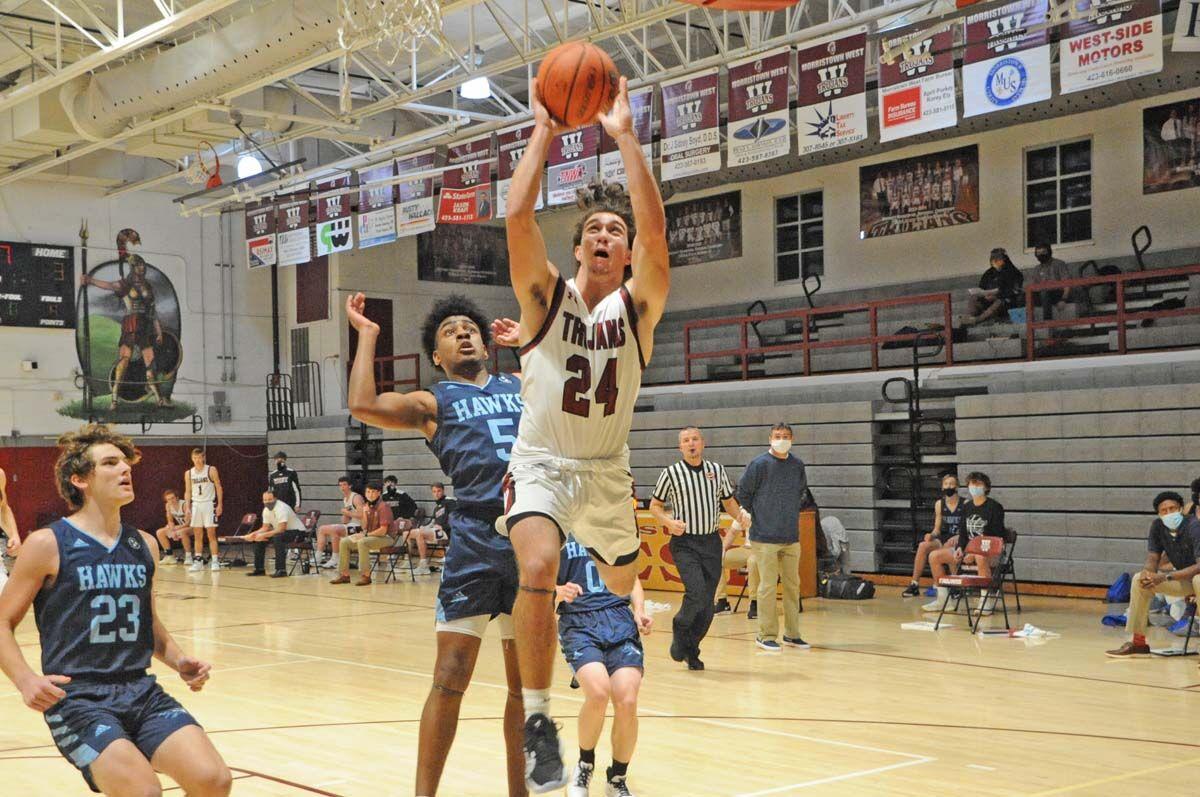 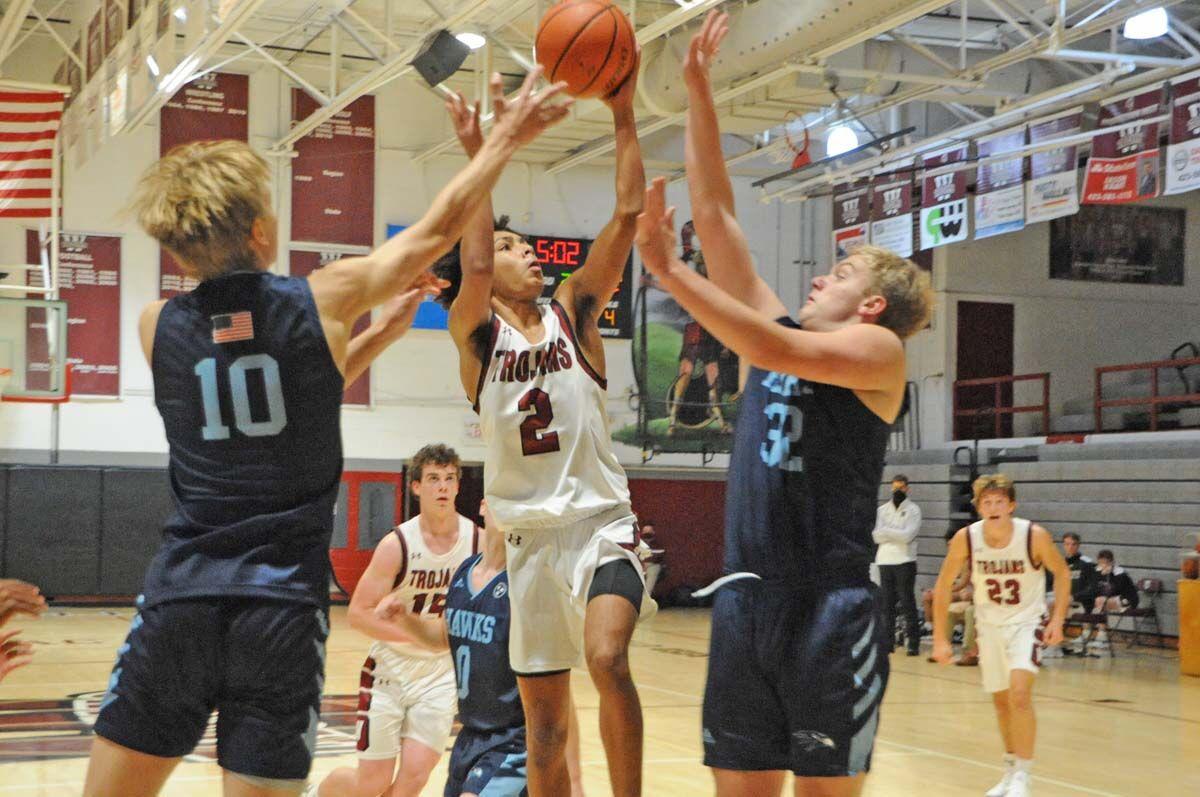 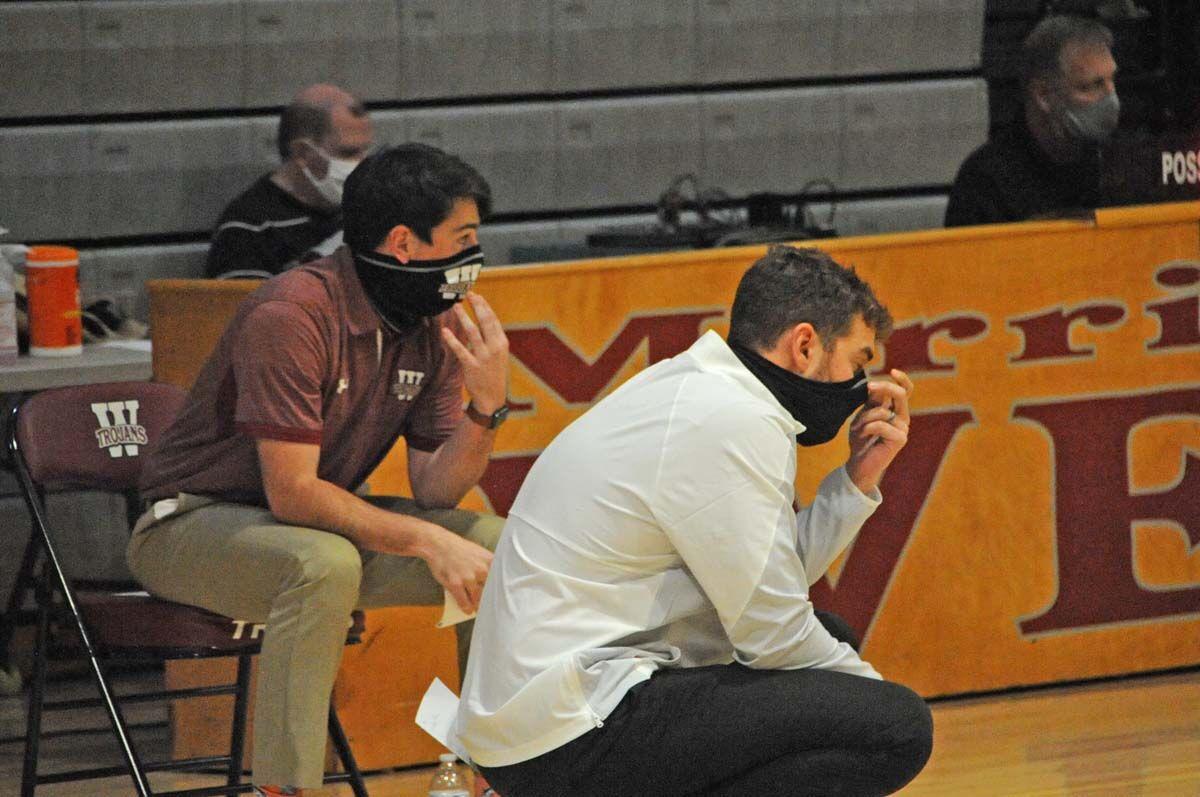 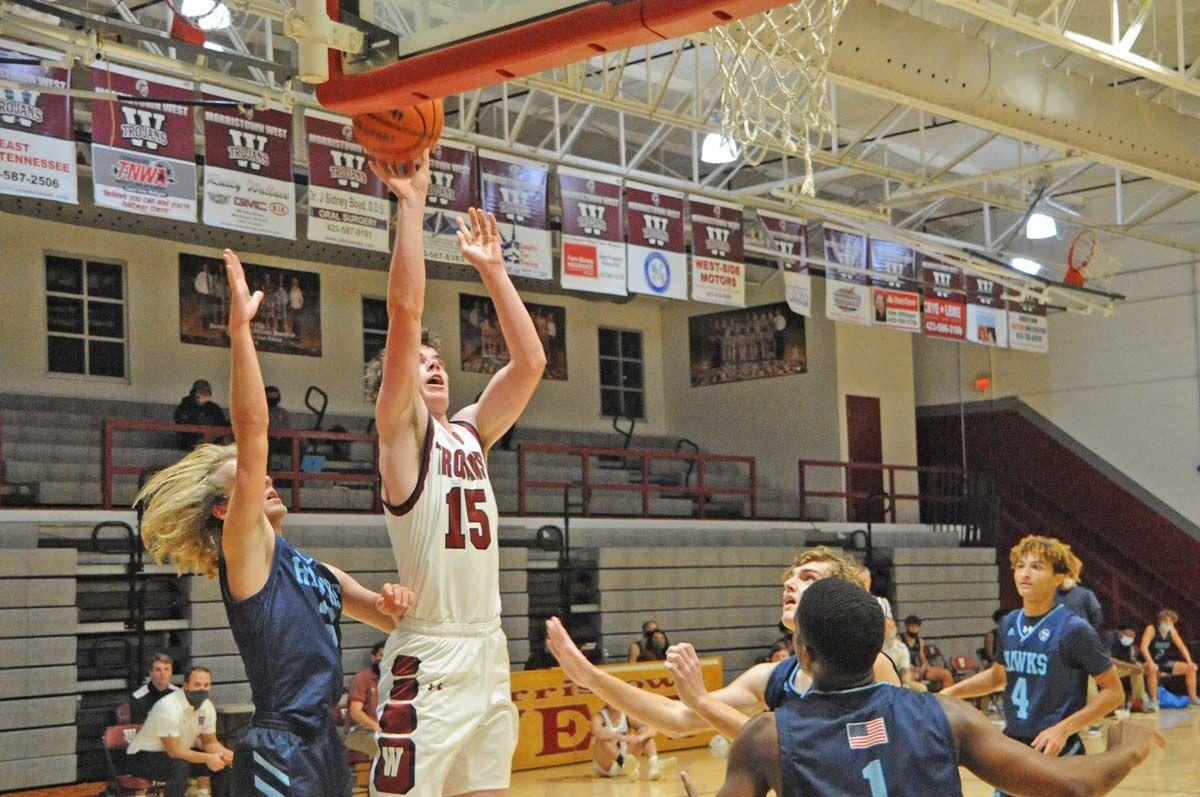 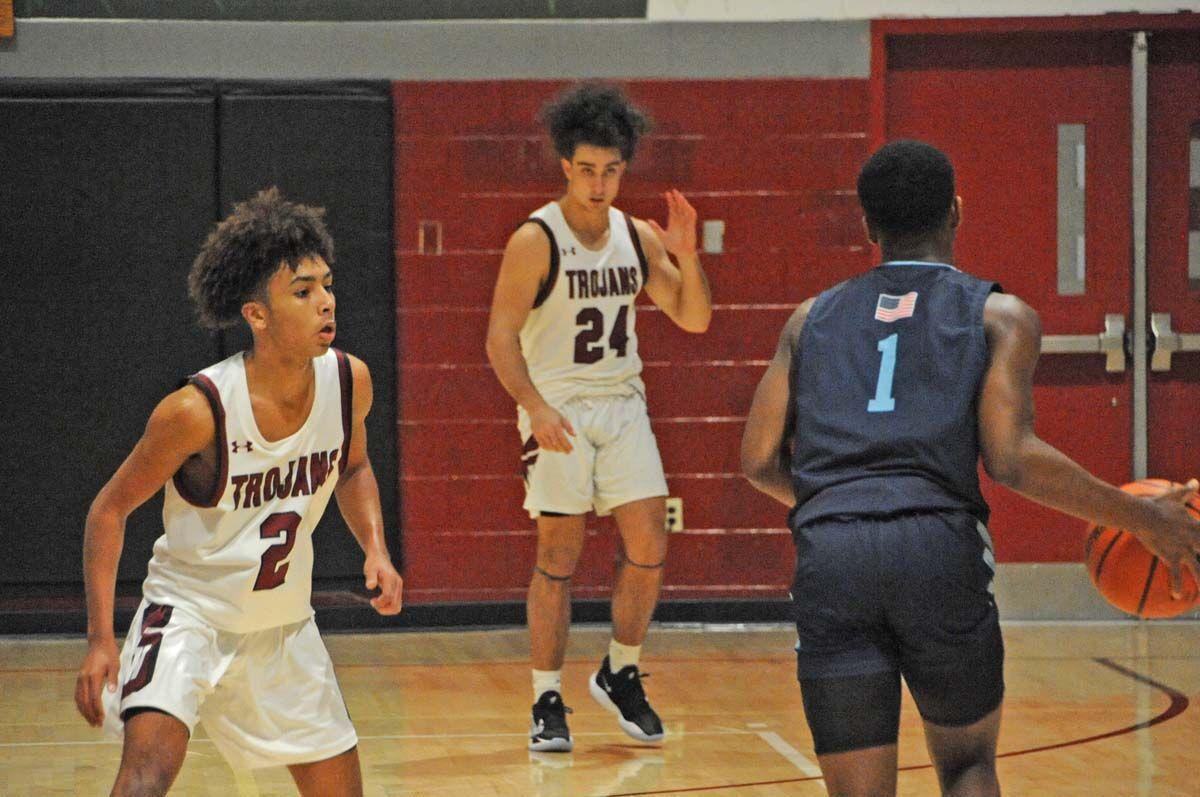 Morristown West's Joey Hancock goes up for a contested shot on Monday. Hancock led the team with 25 points.

Despite a 16-4 run in the fourth quarter, the Morristown West boys’ basketball team could not overcome a 16-point deficit Monday evening, falling to Hardin Valley 52-45.

It was the first three and a half quarters that defined the game for the Trojans as they struggled on both ends of the court.

“I don’t think we deserved to win this game one bit,” Morristown West coach Jonathan Smith said. “Honestly, I don’t think our guys should expect to win games like that. I told them in the locker room that this was their (Hardin Valley’s) first game, so they were going to come out with extreme effort, and they did that early. I told our guys that if they don’t respond, we’re going to get hit in the mouth and we battled for three and a half quarters trying to get back in the game.

“If we don’t have consistent effort for the first three and half quarters, why even play basketball? Honestly, that sounds so terrible, but that is what I told them in the locker room.”

With the loss, Morristown West falls to 2-2 on the season.

It’s been a back-and-forth start to the season for the Trojans, as expected with the lack of summer games, scrimmages and practice time. However, for Smith, it’s the lack of effort at times that is concerning.

“We just have a commitment issue in the locker room and in practice, and I don’t know how to fix it,” Smith said. “It’s one of those things where I can’t make the passes over the pressure for these guys. They are going to have to start owning it themselves and if they don’t, we’re just not going to be good. I told them that I am committed to getting better and putting in new looks, but if they are not going to put that work ethic in themselves, we don’t stand a chance.”

It was Hardin Valley’s full-court press that really caused problems for Morristown West early. The Trojans turned the ball over upwards of 25 times and never really seemed comfortable when the Hawks pressured them for 94 feet.

“I think it’s extremely lackadaisical,” Smith said. “I think there were a lot of one arm passes and lollipop passes. I don’t think we were ready to play against that. I think it goes back to, if we were pressing each other in practice every day and providing pressure every single pressure every time in practice, we would find a way to get better. Until we do that, we’re not going to see the results we want.”

Despite going down 16 to start the fourth quarter, West did manage to make it interesting late in the game, going on a 16-4 run.

The run started with an and-one from Joey Hancock and two free throws from Elijah Davis. Then, West turned up the pressure defensively after two Hardin Valley free throws, creating multiple turnovers. After a Davis basket, Hancock provided yet another and-one and Ryan Shafer added two free throws to make it a six-point game.

Davis capped off the run with a basket to make it 47-43 with three minutes to go, but that was as close as West would get, failing to capitalize on missed shots and turnovers late from Hardin Valley.

“I thought we guarded, got stops and were able to score offensively (in the fourth quarter),” Smith said. “In the first half, we scored five points in the first quarter. That shows we just didn’t get enough shots on the rim which goes back to turnovers. But again, it’s early and there were no summer games or scrimmages, so you expect that. What we can’t have is a lack of work ethic and communication.”

Hancock and Davis led the charge for the Trojans down-low. Hancock had a double-double with double digit rebounds and 25 points. Davis added 10 points.

During that fourth quarter run, Hancock had 10 points while Davis added six. Despite some missed shots in the paint, West was able to make up for it as Hancock and Davis got offensive rebound after offensive rebound.

“Joey is a beast,” Smith said. “He doesn’t take any type of no from the other team. He is physical and knows what to do, and I know what I am going to get out of them every night. Him and Elijah are extremely good for us down low, and I think they are willing to compete.”

Morristown West will be back in action next Monday, taking on Gatlinburg-Pittman. For Smith, he just wants to see his team take a better approach at practice.

“I know that sounds so cliché and a lot of coaches say it, but you can’t compete when you get into a game and bullets are flying and it’s hard to adjust to that,” Smith said.