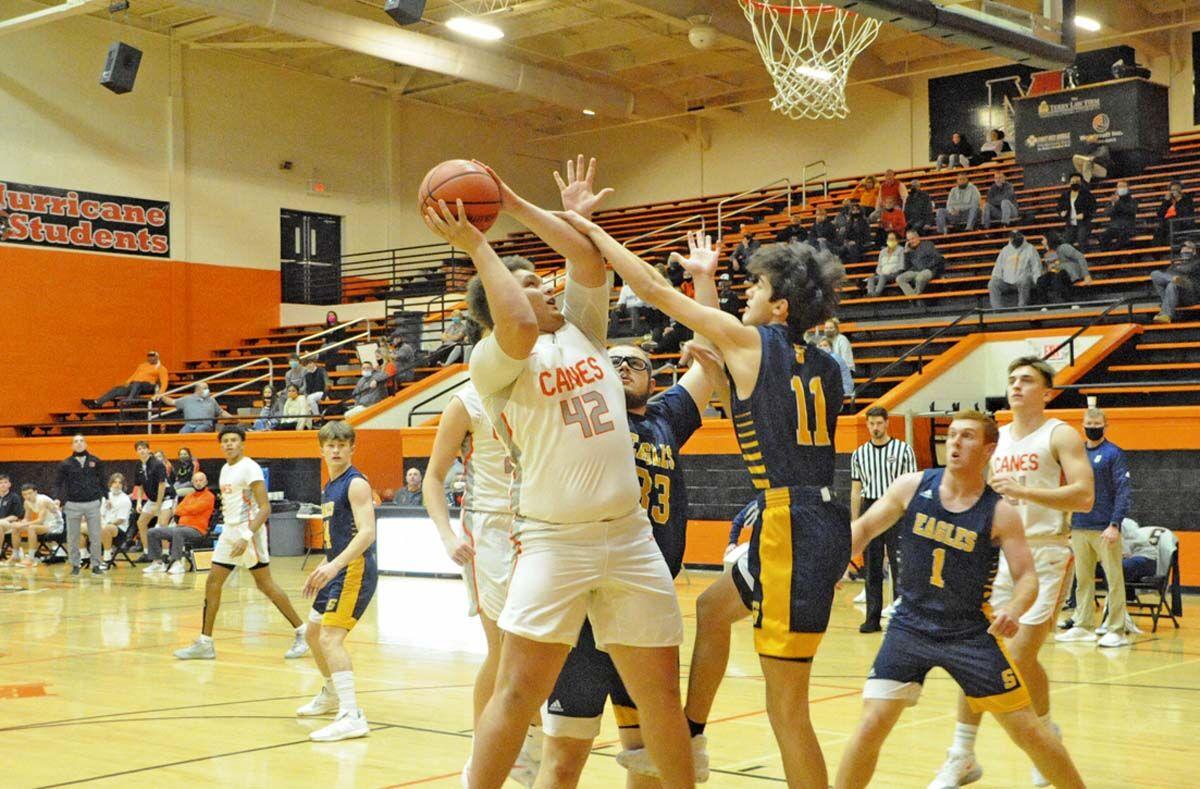 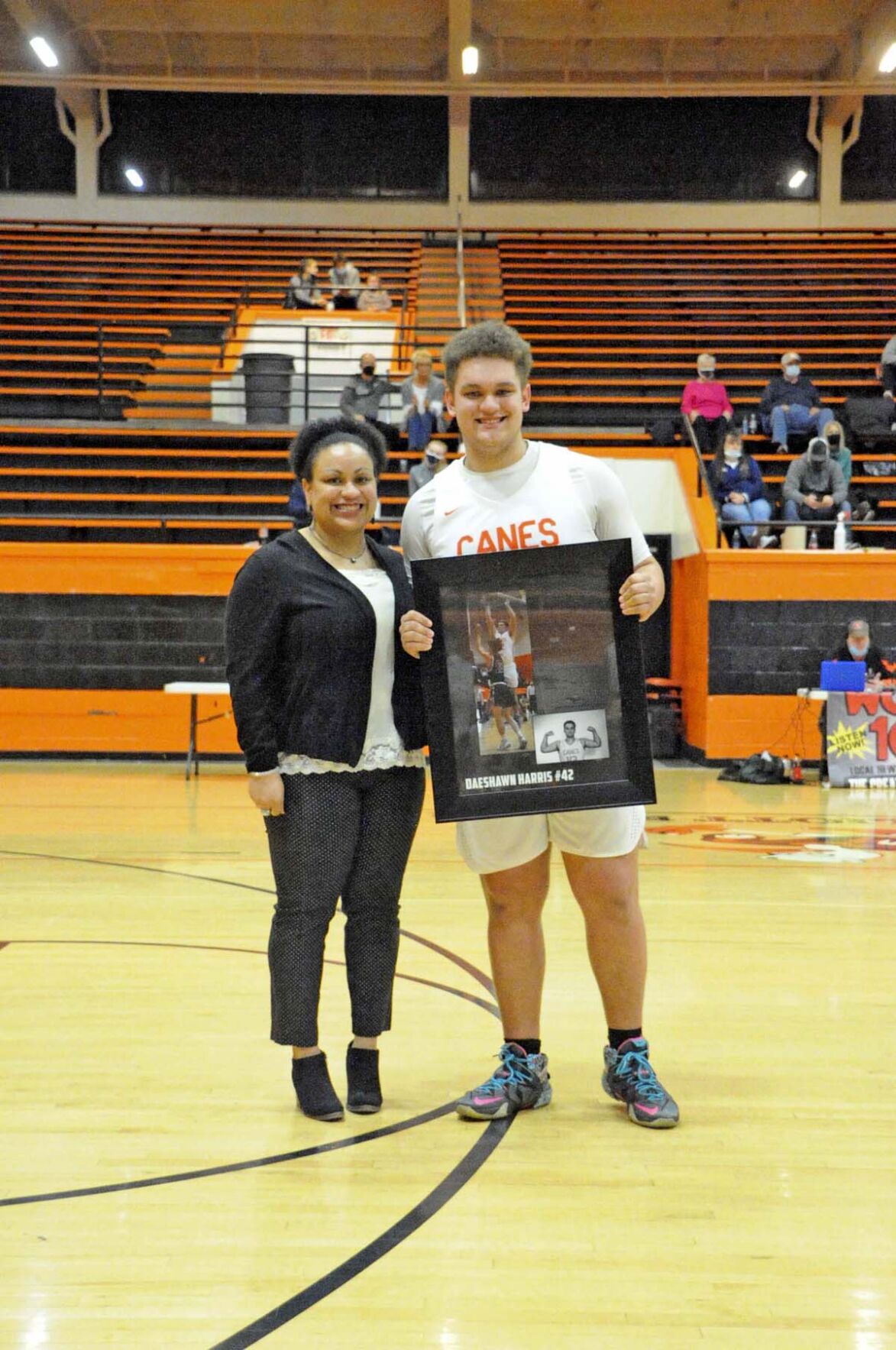 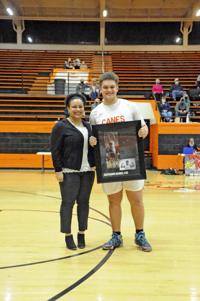 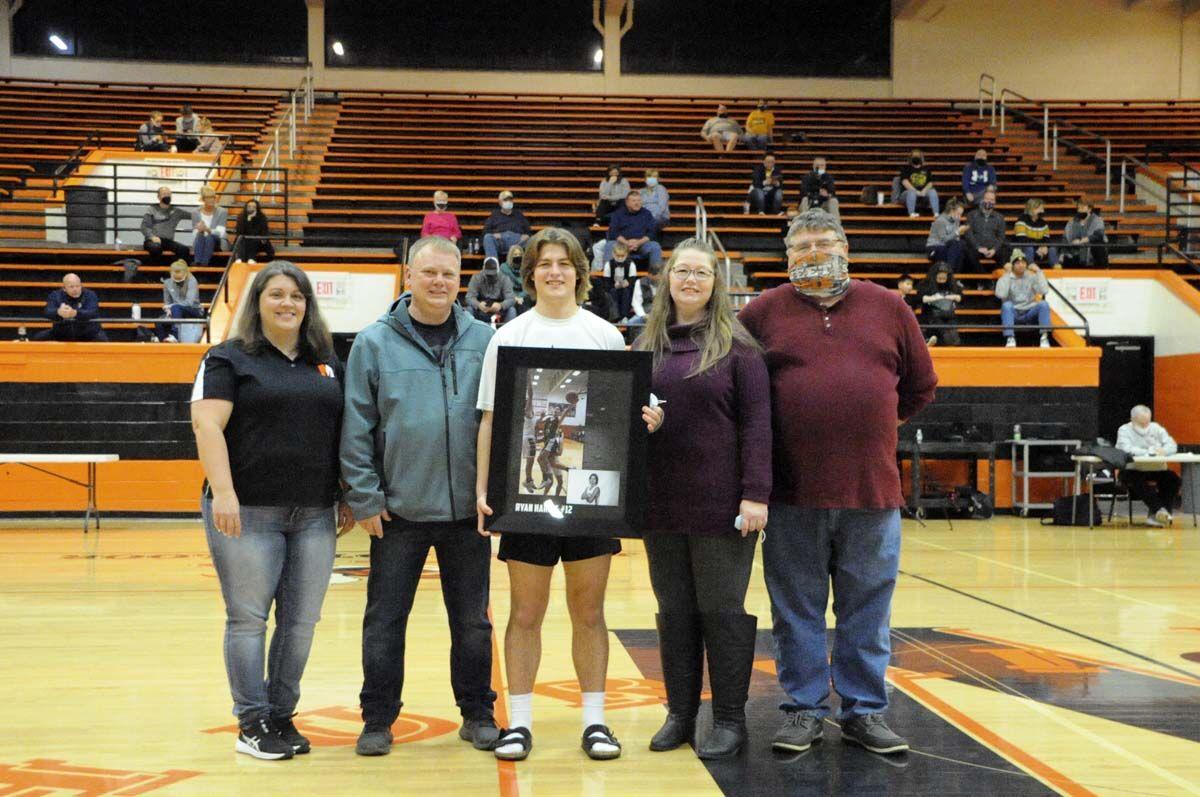 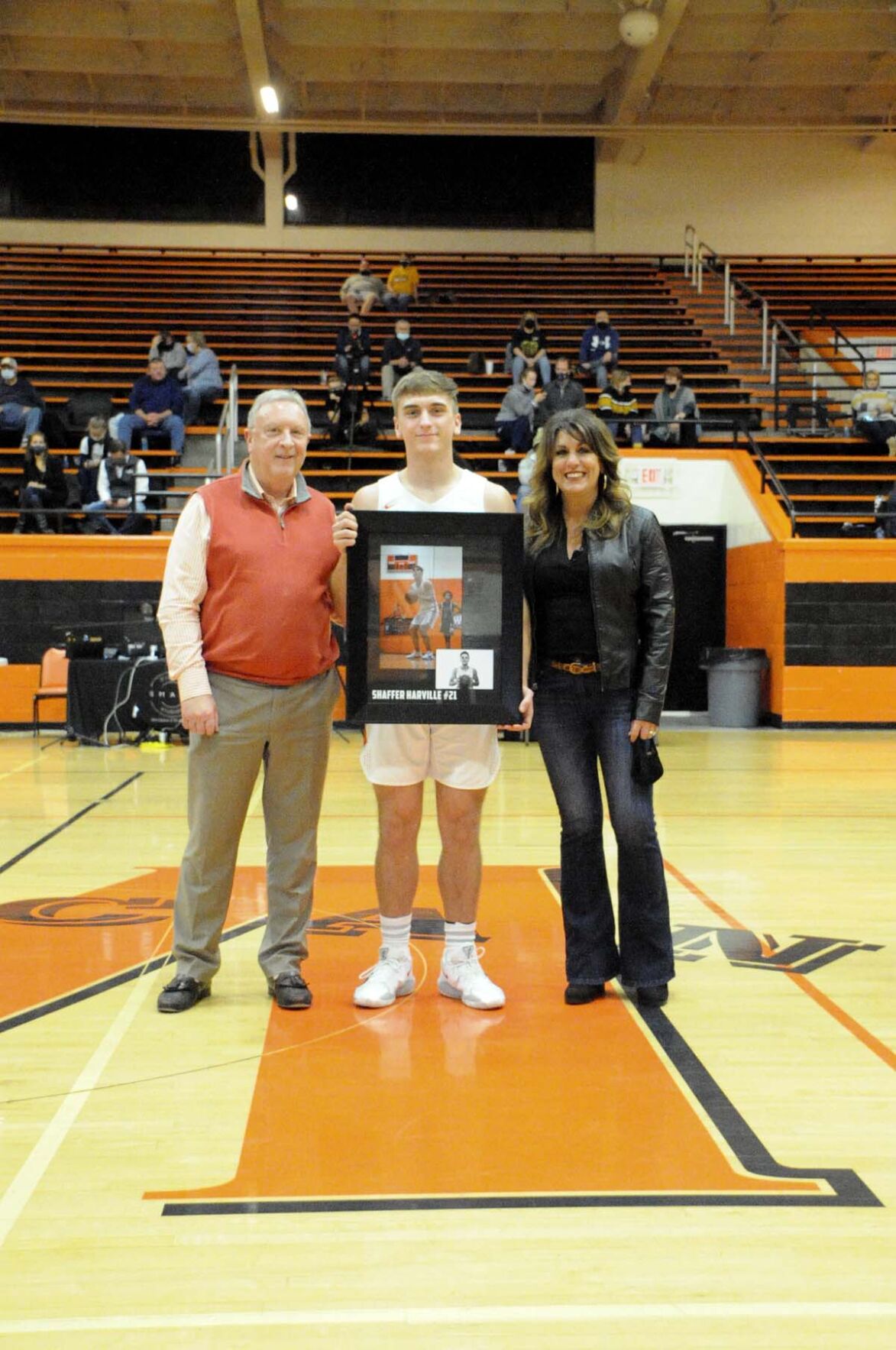 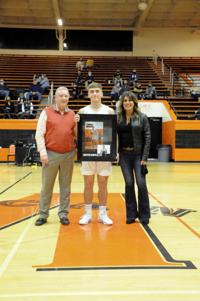 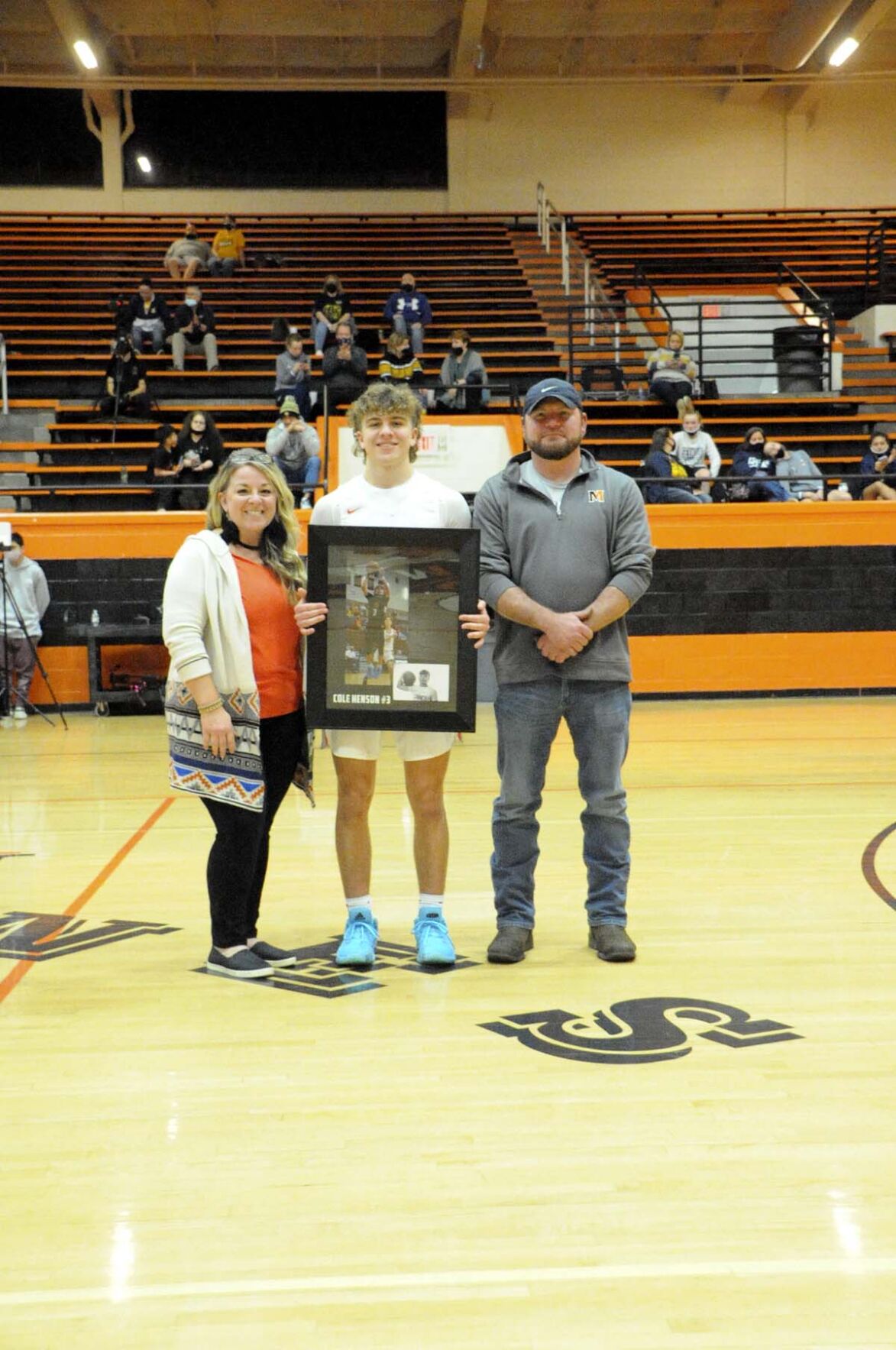 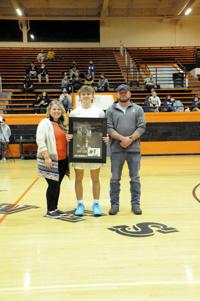 After seniors Shaffer Harville, Daeshawn Harris, Ryan Harris and Cole Henson were honored in pregame ceremonies, East took control from the opening tip and rolled to its ninth straight win.

Braden Ilic scored all 13 of his points in the first period when the Hurricanes opened a 29-9 lead and never looked back.

The ‘Canes are now 13-3 overall and a perfect 6-0 in Inter Mountain Conference action. The Eagles slipped to 1-12 and 0-3 in league action.

The three seniors who played all scored with nine players getting into the scoring act. All 11 players who played had at least one rebound in the game.

It was never a game as East could have pretty much named its score if Coach Alden Collins had elected to press all night.

Collins said, “I was proud of the way we started the game. We had some different guys in there to honor our seniors and this was a great way to do it. I was glad they all scored and wish Ryan could have played. Those guys have put a lot into our basketball program. They’ve spent a lot of hours in the gym for us.

“Defensively, we were able to create some turnovers early in the game that created a lot of easy baskets,” he said. “We did a good job of executing tonight.”

“It’s always nice to get to play everybody because all of them work very hard in practice. It was also really good to see Tyson shoot the three like he did. We’re going to need that later on as we want to be tuned in as we start the second half of our district schedule on Friday.”

East led 47-18 at the half and Collins admitted keeping the intensity level up was difficult. “That sometimes happens in a game like this but we didn’t play badly or anything. It was a good effort.”

Indeed it was. Simpson got the rout started with a three. After Pennington scored for the visitors, East unleashed a 22-2 spurt and it was over for all practical purposes. Ilic scored six straight before Harville hit two free throws. Ilic bombed in a triple from the top of the circle before Hilton had a basket for Seymour.

Simpson had a three and another bucket and Cloninger added a pair of baskets and it was 25-4. Hilton knocked down a three for the Eagles before Ilic scored two more and the lead was 22.

Seymour had a 5-2 spurt to start the second quarter but Cloninger scored twice and Simpson hit another three and it was 38-14. Brandon Chandler scored for the Eagles but East closed the half with Caleb Hall scoring a pair of baskets in a 9-2 run to lead 47-18 at the half.

East upped the lead to 33 early in the third quarter and was up 58-28 at the final rest stop. Frost hit two more three’s in the fourth quarter and Blake Jarnigan added another.