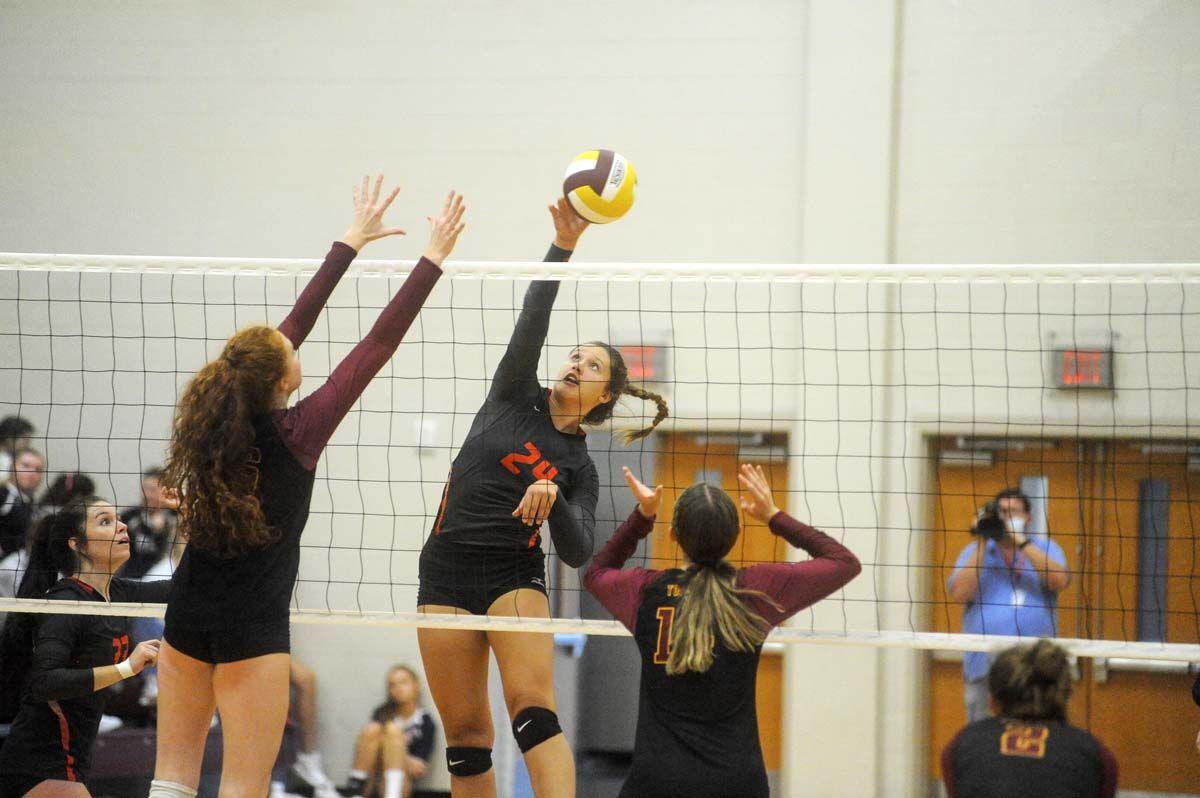 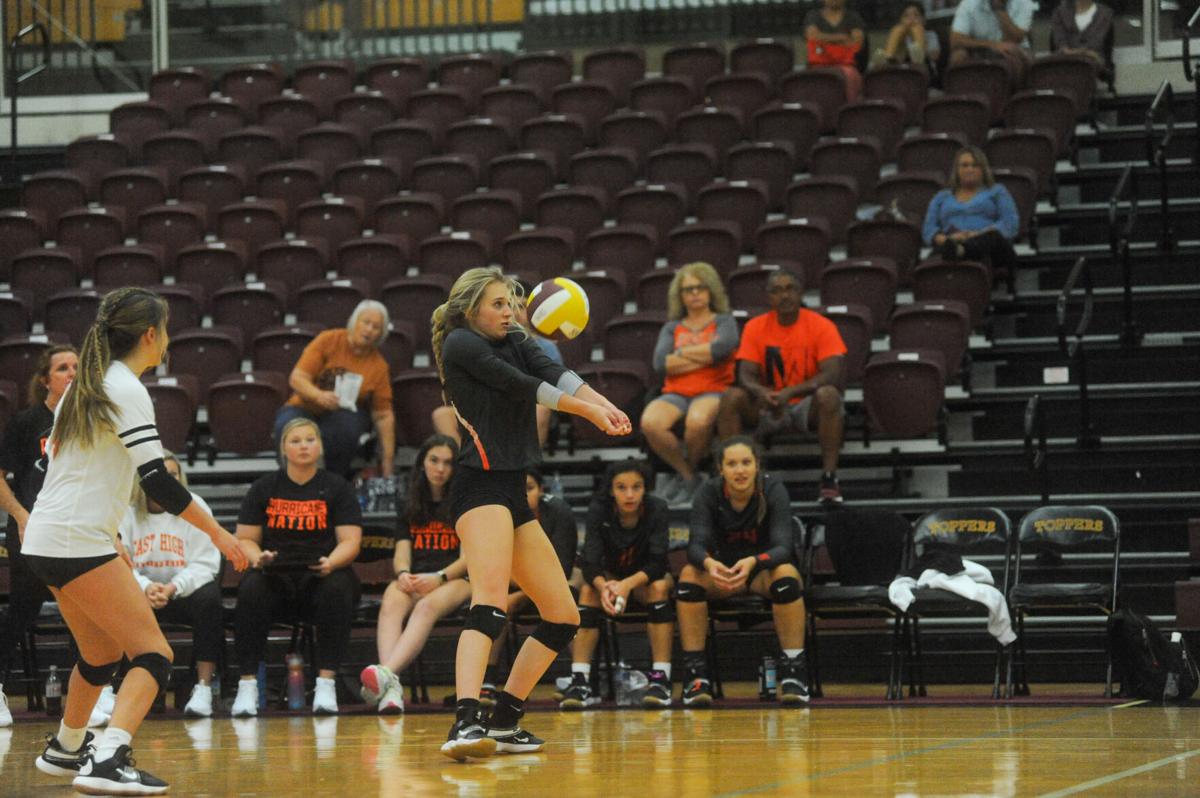 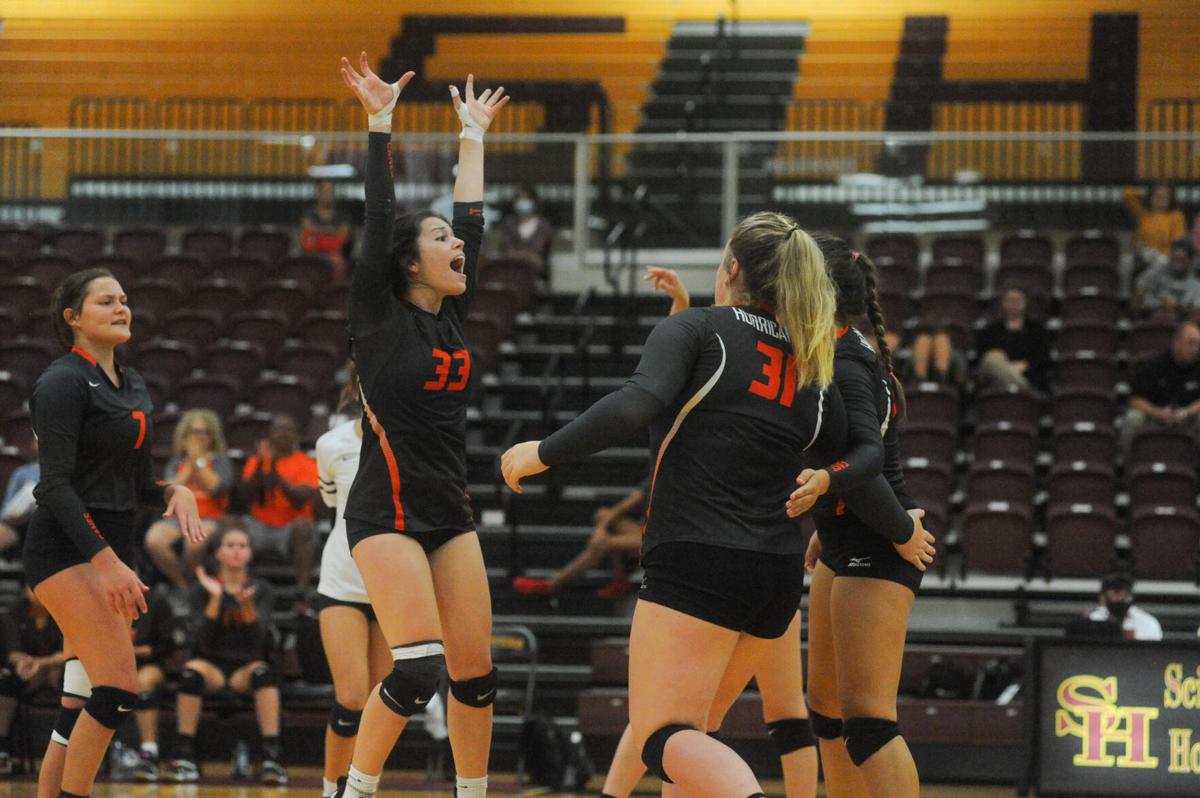 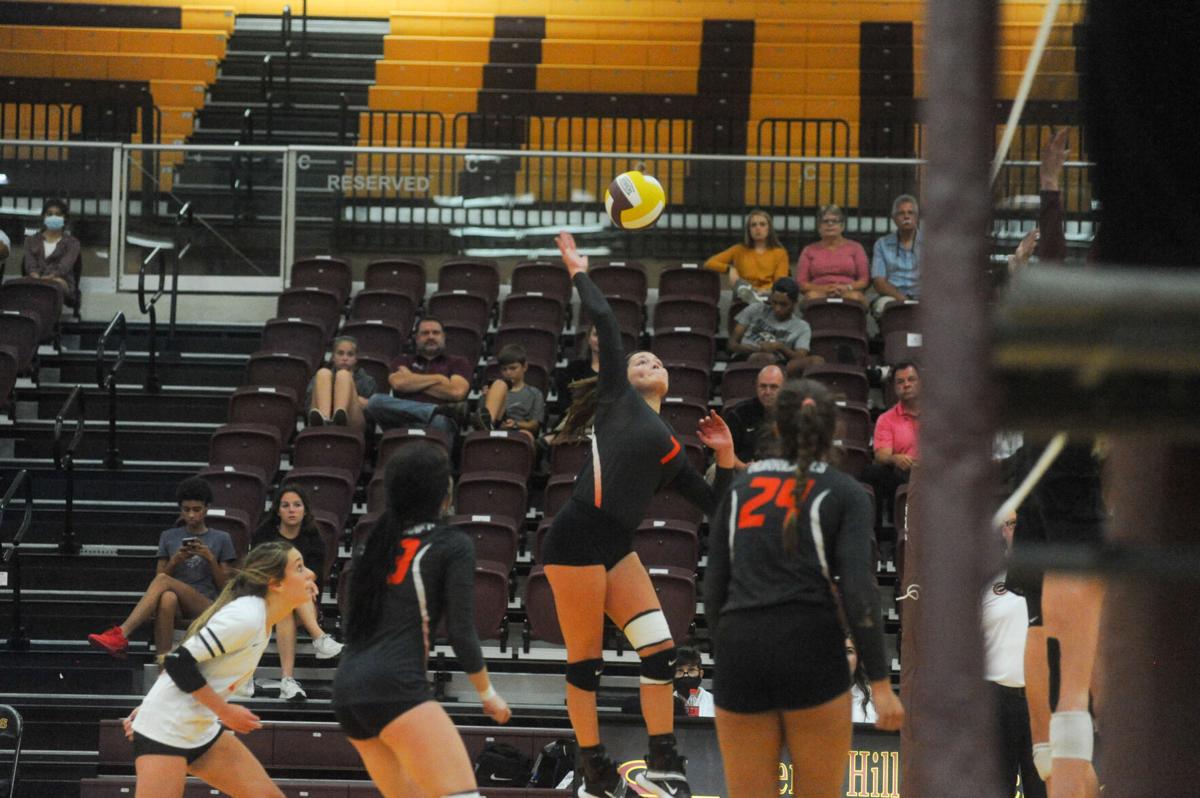 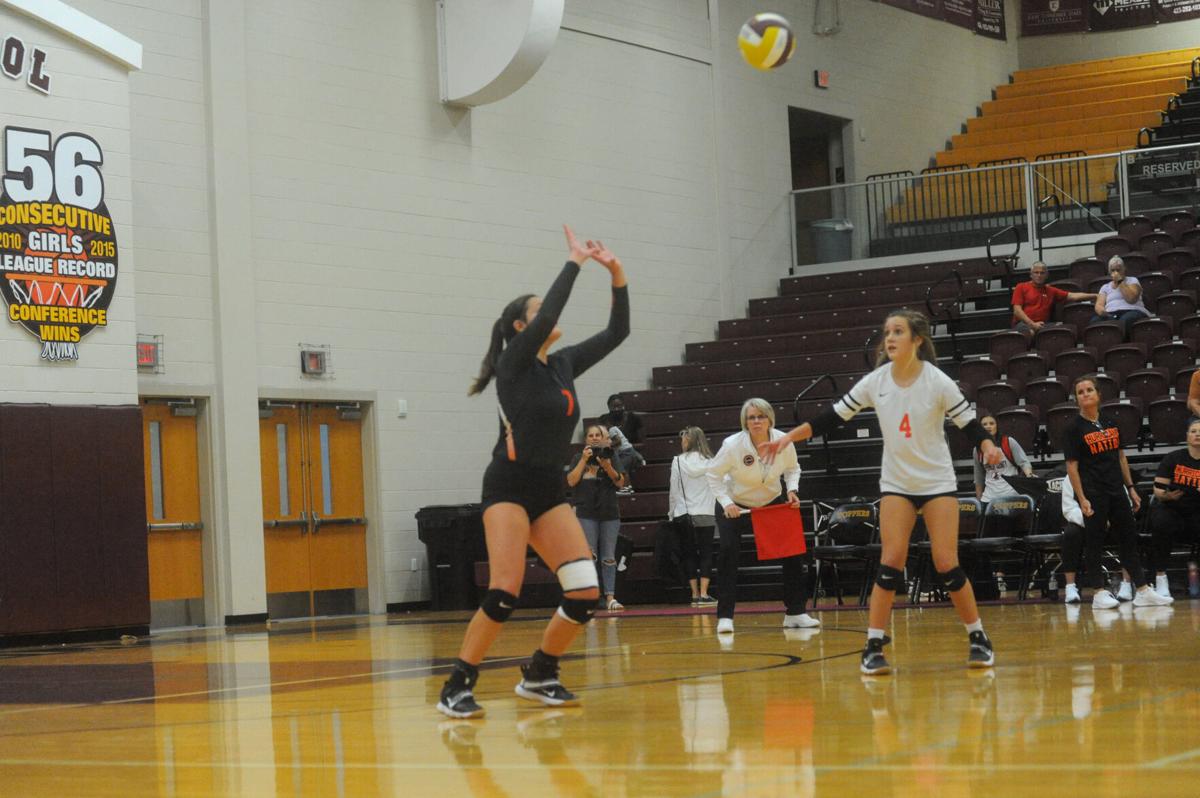 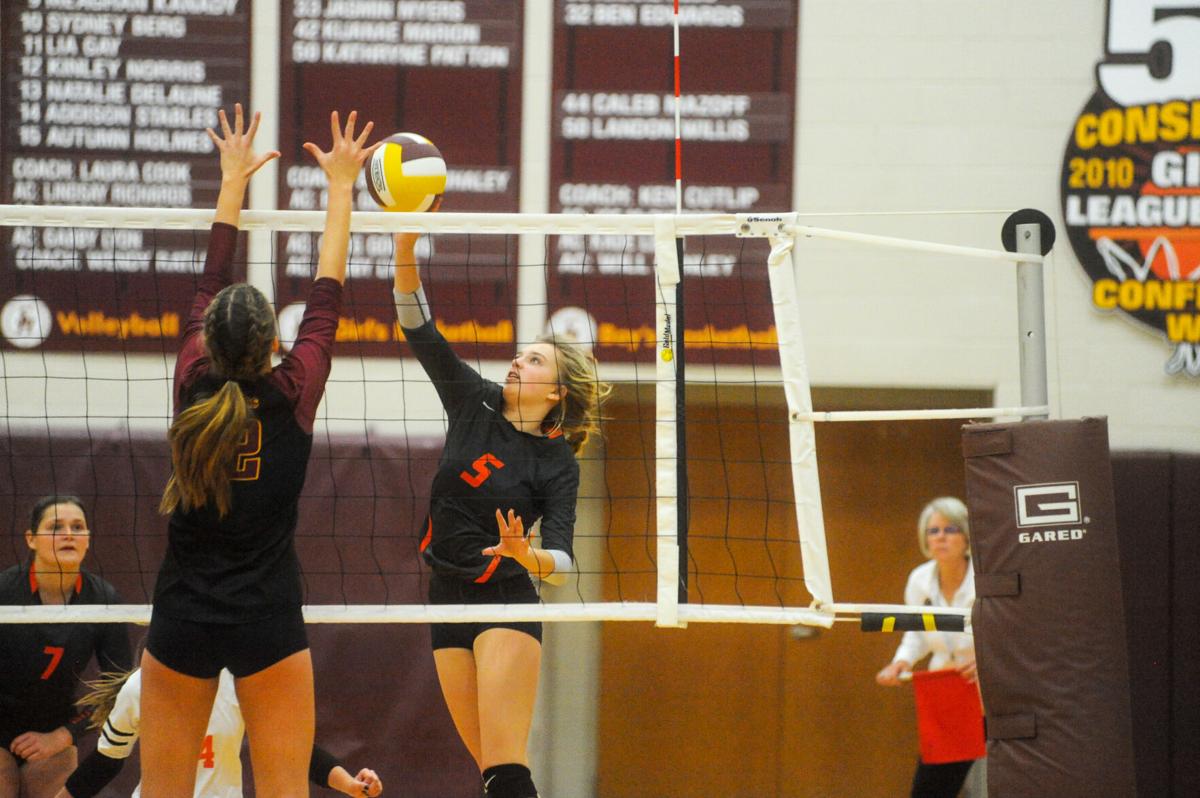 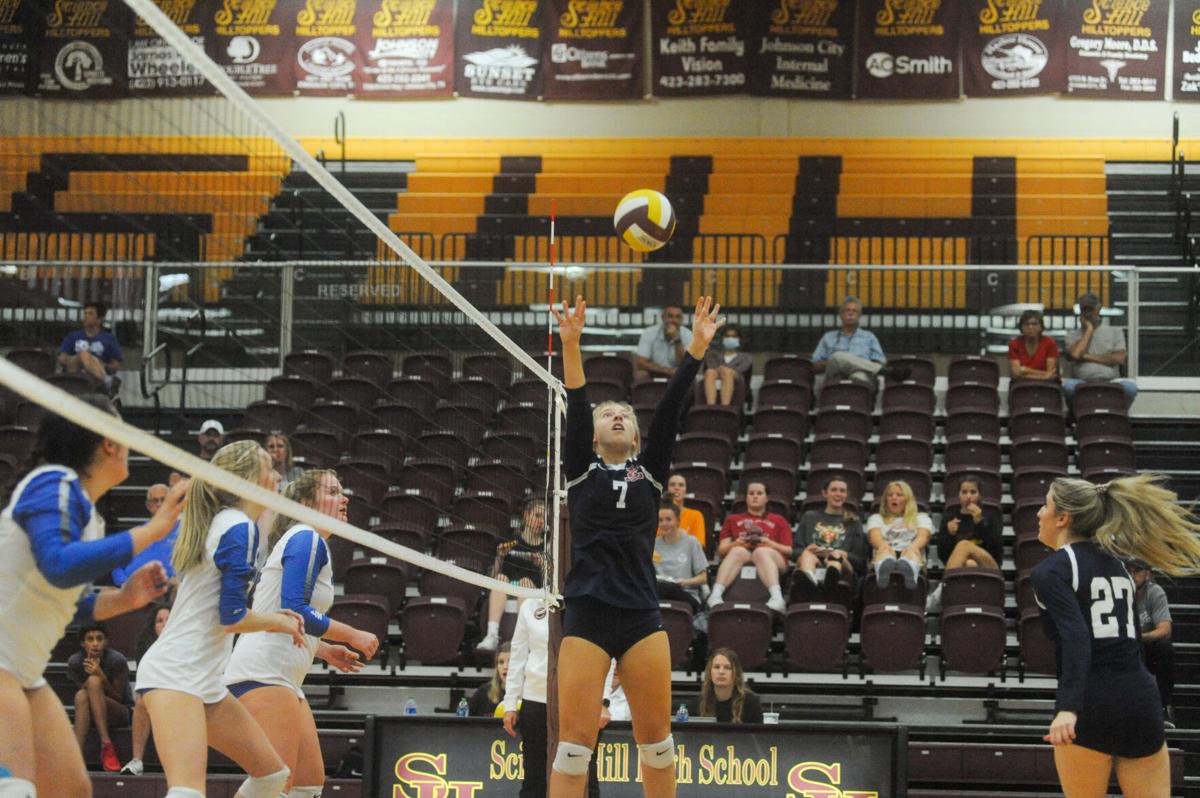 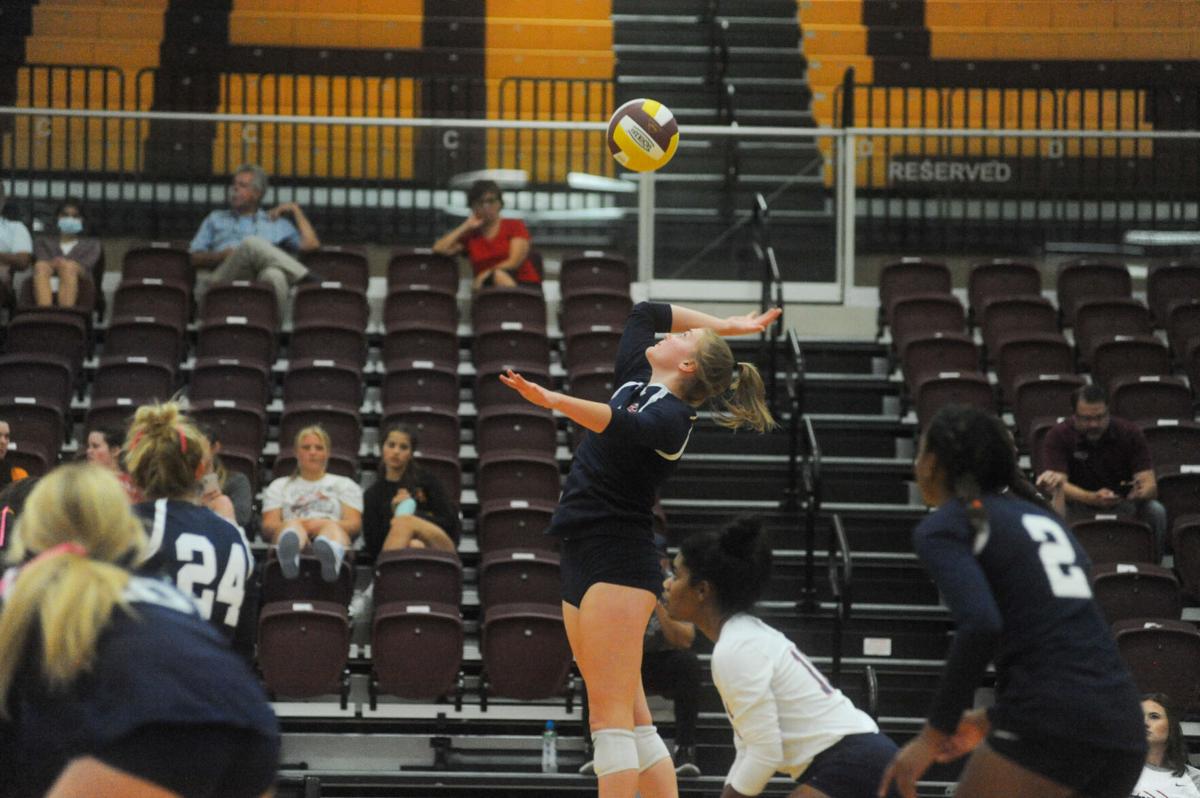 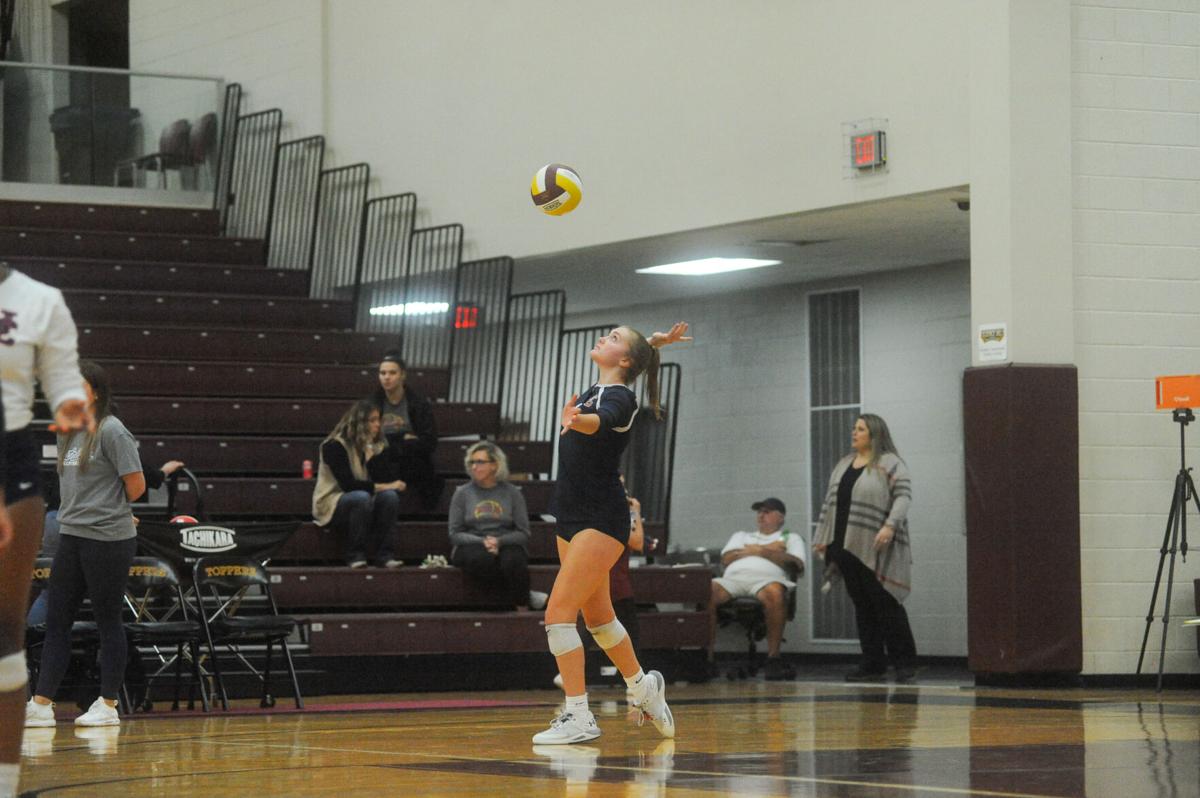 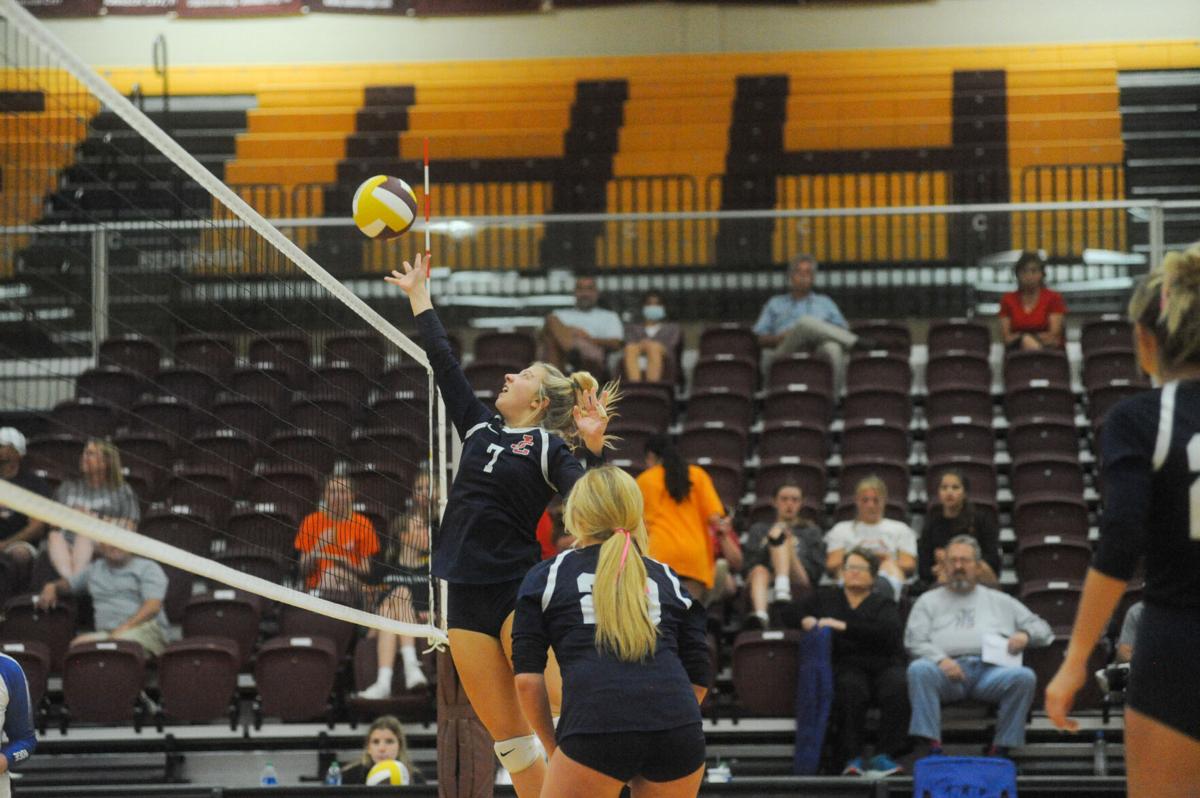 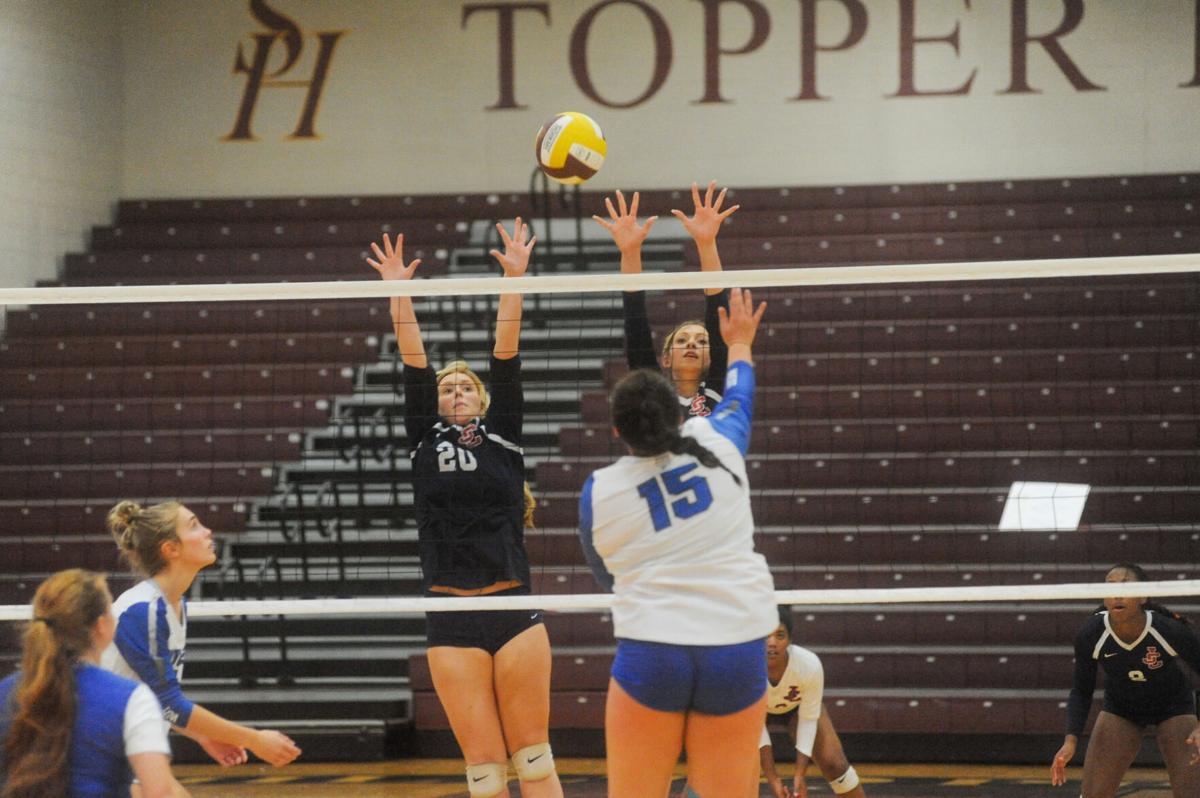 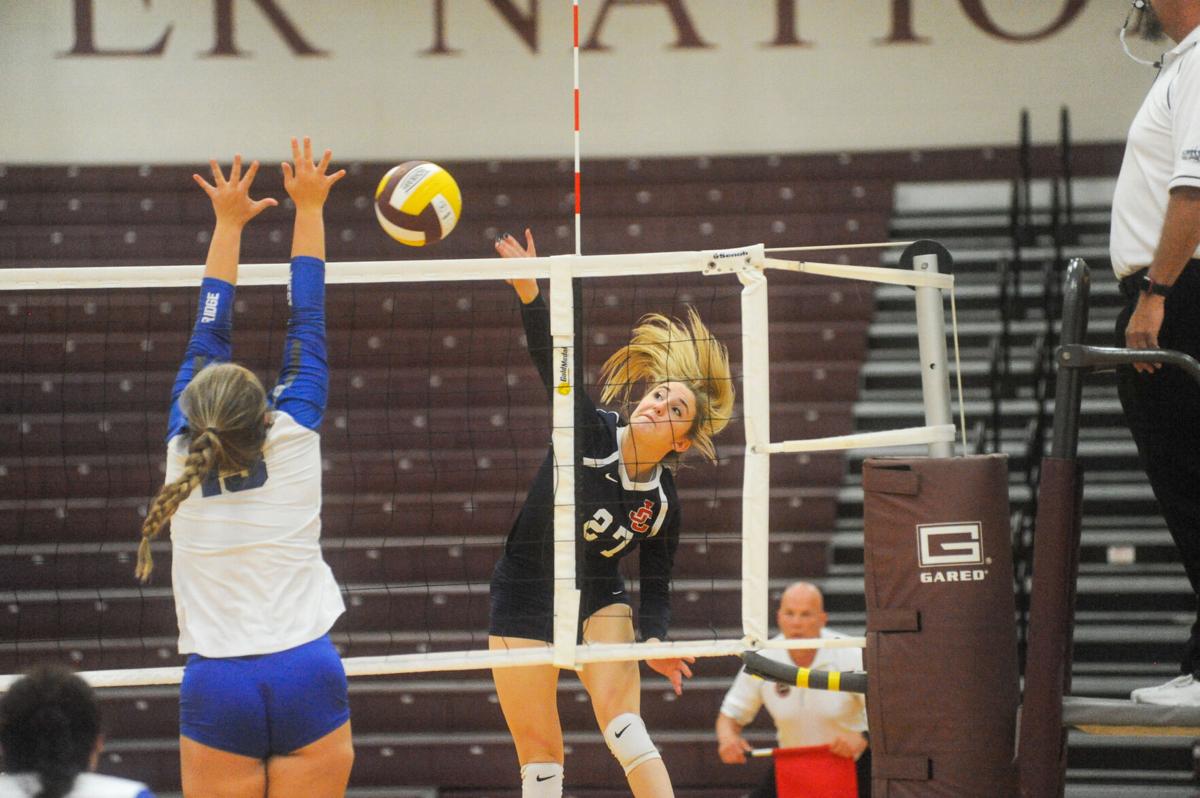 JOHNSON CITY—Volleyball is over for District 2-AAA this season after both Morristown East and Jefferson County lost in the opening round of the Region 1-AAA Tournament at Science Hill on Monday.

The host Lady Hilltoppers improved to 26-4 on the season with a 3-0 victory over the Lady Hurricanes in the opening match and West Ridge claimed a 3-1 triumph over Jefferson County in the nightcap.

Those two will collide tonight for the region title and the right to host a sectional contest on Thursday while the loser will travel to play at the Region Two champion.

The Lady Hurricanes had a very hard time receiving serve in the match as Science Hill rang up a staggering 20 aces. With the inability to pass it pretty well keeps a team from having a good offensive night and East didn’t have one.

East managed just 20 kills in the match led by Lakin Burnside’s seven. Reagan Forester was next on the list with four. Forester also served five aces for the Lady ‘Canes.

The Lady ‘Toppers got 13 kills from both Jordan Hallman and Autumn Holmes while Hallman and Maddie Fuller had five service aces each. Holmes and Lexi Kologerops each had 10 digs.

East coach Holly Drinnon said, “We really struggled to pass the serve. When we did pass the ball, we played pretty well.

“But we missed serves at key times in the first two sets,” she added. “Against a team like Science Hill, you can’t make those unforced errors. We played pretty well defensively most of the time.”

In reflecting on the season, Drinnon commented, “I think we had a good year. I thought we had really good chemistry with this group and they really worked. There were some times we had communication problems on the floor but that’s some-thing that happens.”

Drinnon closed, “To lose Harmony (Sullivan) before the season even started and then lose Finley (Surber) as quickly as we did, I think the girls did a good job of coming together and working to get better.

“I thought we always played hard and that’s what a coach likes to see.”

The first set was tied at 1, 2, 3 and finally 6. That’s when the Lady ‘Toppers broke the game open with an 8-2 run with half the points coming on aces.

East fought back from that 14-8 deficit with three straight points before serving out of bounds. Fuller then served three straight aces as the home team pulled away again.

The Lady ‘Canes scored two straight points but the winners closed with an 8-1 run to win it going away.

In the second set, East scored the first two points and led by 5-3. Science Hill came back for a 9-7 lead. But Forester scored on a dink, Burnside and Ella Wampler both blocked shots Jordan served an ace to put East up by two.

The teams traded points before Hallman had two kills and a block in a six-point run by the home team. Burnside scored on a block for East but the Lady ‘Toppers scored three more to lead 19-13.

Drinnon and Burnside had kills and Wampler scored on a block as East cut the deficit to 21-19 before Science Hill closed on a 4-1 burst to grab a 2-0 lead.

Forester put down a kill for East and four aces to go along with a kill by Kierstin Bell and a block by Burnside as East ran off its longest streak of the night, scoring seven straight to lead 19-15.

However, the Lady Hurricanes didn’t score again as Hallman served nine straight points after an East serve sailed out of bounds. Holmes had three kills and two blocks in the run and Hallman added three aces.

The Lady Patriots started slowly and fell behind 13-5 in the opening set before battling back within 14-10.

After the Wolves had a 4-1 run Caelyn Bradley and Izzy Johnson sparked a rally that got the Lady Patriots within 22-17. But a serve into the net and two net violations ended the set.

Jefferson County seized a 6-1 lead in the second set before West Ridge started chipping away at the margin and caught up at 8-8. The set was then tied at every point through 15 with the final tie coming on a kill by Madyson Os-borne.

A hitting error by the Wolves and an ace by Bradley put the Lady Patriots ahead 17-15 before a hitting error made it 17-16 before Jefferson County ran off the last eight points of the set behind the serving of Osborne. West Ridge had four hit-ting errors in the spurt.

The fourth set saw the score tied 10 times with the final tie coming at 12-12 on a kill by Izzy Johnson. Casey Wampler and Gracie Olinger had kills for the Wolves and they never trailed again.

It was still anybody’s set at 17-16 when the winners reeled off four straight points. The Lady Patriots couldn’t get closer than three after that as kills by Rylee Haynie and Wampler kept them out front.

Jefferson County was down 4-3 in the final set when two kills by Moore and one each from Osborne and Jayden Townsend gave the Lady Patriots a 7-4 lead. However, West Ridge used a 9-2 run to go back in front by four and main-tained that lead until it was 19-15.

But Johnson and Bradley nailed kills and Osborne added two more to tie it again. Wampler and Osborne traded kills before Bradley served an ace to give the Lady Patriots a 21-20 advantage.

That’s when Wampler slamed another kill and Olivia Delung nailed one for the Wolves. After a time out, two hitting er-rors put West Ridge at match point and Rachel Miller knocked down a kill to end the match.

Wampler wound up with 13 kills, Miller had 11 and Haynie 10 for the Wolves. DeLung had 25 assists, 10 digs and seven blocked shots. Emalyne Hubbard finished with 14 digs and Bradlie Warner had 12.

Jefferson coach Tori Yokum said, “I thought we played hard tonight. We’ve gone through so many injuries and used so many rotations this season.

“I thought Izzy played a great match tonight,” she added. “We played well defensively in the middle but they have a lot of strong hitters and just kept on hitting the ball.”