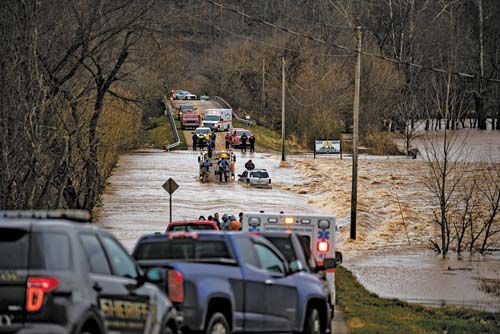 Rescue workers from Hamblen and Cocke counties watch as Centerview Volunteer firefighters come to the aid of a woman whose car became stuck while trying to ford flood waters from the Nolichucky River on Spencer Hale Road in Hamblen County Friday. 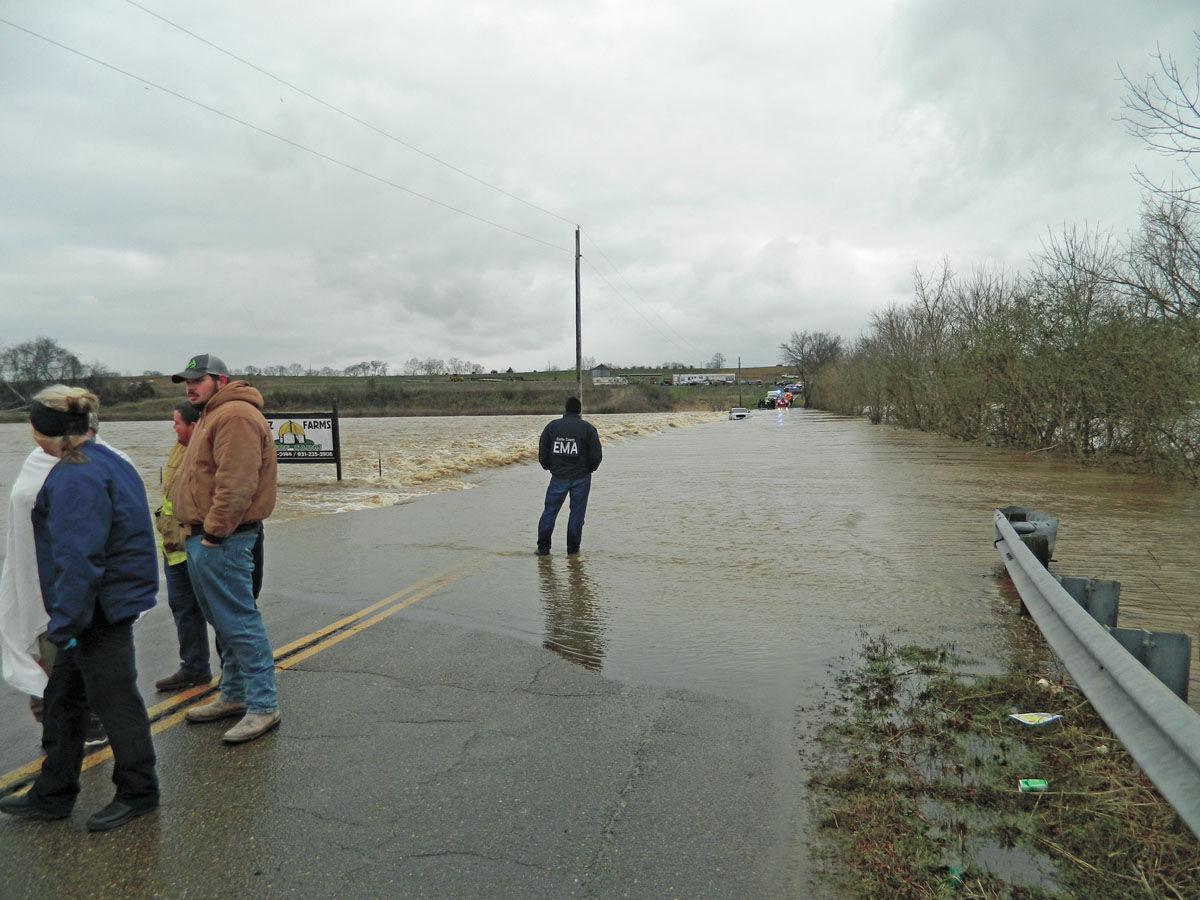 An EMA worker looks at a Jeep Grand Cherokee stuck in flood waters on Spencer Hale Road at the Cocke-Hamblen County line.

Rescue workers from Hamblen and Cocke counties watch as Centerview Volunteer firefighters come to the aid of a woman whose car became stuck while trying to ford flood waters from the Nolichucky River on Spencer Hale Road in Hamblen County Friday.

An EMA worker looks at a Jeep Grand Cherokee stuck in flood waters on Spencer Hale Road at the Cocke-Hamblen County line.

The water had risen higher than expected and swept away the warning sign near the Cocke Hamblen County line.

Sarah Mantooth thought her Jeep Grand Cherokee could make it.

The 38 year-old Mantooth, of Emanuel Road, Newport, was traveling on Spencer Hale Road in Hamblen County at about 3:30 p.m. Friday, approaching the Nolichucky River, when she came upon the rushing water over the roadway at the Litz Farm.

“I just rolled out to the water there and I thought maybe I can make it through it and I started out and my Jeep just stalled and I realized how deep it was,” she said.

“My Jeep is stalled and I’m stuck,” she said, stuck on the roadway surrounded by two feet of rushing water, which was slowly pushing the SUV closer to the road’s edge and disaster.

Mantooth was rescued about 30 minutes later by Centerview volunteer firefighters who drove a large fire engine beside the Mantooth Jeep. They gave her a lifejacket and she crawled out the sunroof, down the windshield and across her hood to safety.

Bell said the water had risen much further than anyone had expected.

“I don’t think anybody could have imagined the water would continue that high,” he said. “We were out here last February (during record flooding) I don’t remember it running as fast as it is right now. There must be a lot of water coming from North Carolina to feed this.”

”I just hoped I wasn’t going to be swept away,” Mantooth said after her rescue. “I’m just glad to be out of that water, but I hate that my Jeep is stuck out there.”

Mantooth wasn’t the only driver to try and make it across. Before she got there, another driver in an unidentified vehicle was swept off the road and down river. Hamblen County Sheriff’s Department Capt. Chad Mullins said the car rolled over but the driver was able to get out and swim away.

“Before I got there, he went had a lighter vehicle his vehicle started floating down the river and he got out and swam to shore. The guy was extremely lucky to get out,” he said.

Mullins said Mantooth was lucky as well that the heavy firetruck was big enough to withstand the water’s force.

“(Centerview) had the only vehicle on site that was heavy enough to get there,” he said.

Mullins said he was amazed that two drivers tried to drive through the rushing water.

“I can’t believe that anybody even attempted it in a regular vehicle,” he said.

Multiple officials urged drivers not to take chances and to follow the “turn around, don’t drown” advice. When drivers try to drive through flood waters they put their lives and the lives of first responders trying to reach them at risk.

“Our main objective is just to get them out of there and get them safe,” Mullins said.

“Turn around, don’t drown,” he said. “This story could have had a lot different ending if there wasn’t a quick response that got that woman out. That car had moved two foot and that back tire was real close to being swept away.