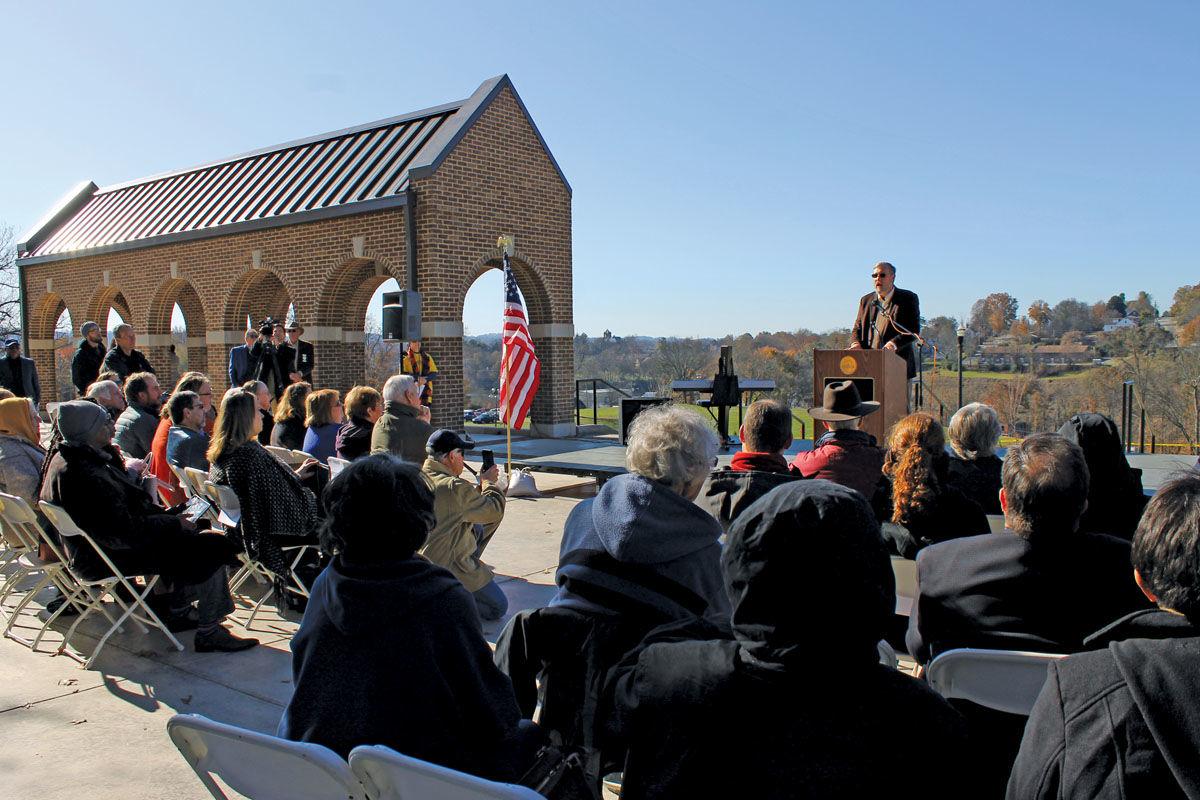 Morristown City Manager Tony Cox speaks at the Colannades at Heritage Park Saturday. For video coverage and more photos from the event, go online to www.citizentribune.com. 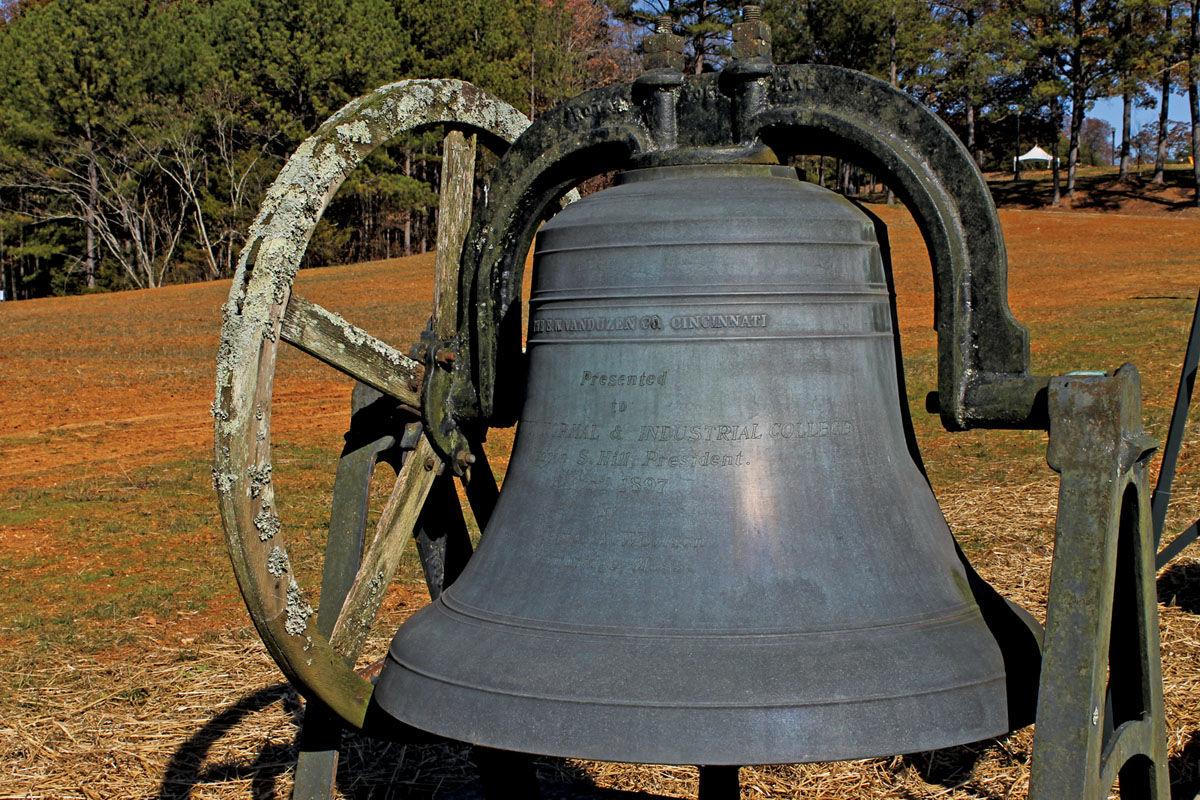 The Morristown College bell was on display during the Salute to Heritage Park. For video coverage and more photos from the event, go online to www.citizentribune.com.

Morristown City Manager Tony Cox speaks at the Colannades at Heritage Park Saturday. For video coverage and more photos from the event, go online to www.citizentribune.com.

The Morristown College bell was on display during the Salute to Heritage Park. For video coverage and more photos from the event, go online to www.citizentribune.com.

A crisp beautiful fall day with sunshine greeted the newest park for Morristown Saturday as festivities lasted all day long to celebrate the city’s latest accomplishment - the opening of Heritage Park.

The celebration, A Salute to Heritage Park, started in the early morning and as Morristown City Mayor Gary Chesney came to the podium, he declared that the park, which sits on the site of the historical Morristown College campus, is open to the public.

“I declare this park is now open,” Chesney said.

The daylong celebration saw city officials and past Morristown College dignitaries speak about the impact the park and the college had on the community. City officials also cut the ribbon officially opening the park and throughout the day bands played on a stage set up for the event, highlighted at the end with the performance of Chris Blue, a Knoxville entertainer known for winning “The Voice.”

Arts in the Park also changed its normal date of its festival from September to November to coincide with the occasion.

But, for some, it meant more than just a park.

Morristown College was an African-American school, started in 1881 and closing in 1994. For years, it was one of only two black colleges in East Tennessee, the other being Knoxville College.

Marian Treece, 79, knows that well. She sat Saturday next to a tent that had displays showing the history of Morristown College.

In her youth, she went to the school.

“I went to it when it was Morristown College-High School before desegregation,” she said.

She said she appreciated the celebration the city had for its newest park, which also celebrates Morristown’s African-American population.

“I thought it was very nice,” she said.

The park is a natural park with few manmade objects. Visitors will be able to stroll immense fields on a hill that peers out toward hills to the west. In the middle of the park rise colonnades, a tribute to Morristown College, which also had colonnades. A paved walkway stretches to the top of a hill, passing by a sign that describes the history of Morristown College.

At the top of the hill, the walkway makes a giant circle with a large field in the middle.

Saturday, vendors lined the walkway at the top of the hill selling food, crafts and artists selling paintings.

Peggy Brewer, chair of the Arts in the Park, said the annual festival had went well.

“I’m delightfully surprised it’s turned out as well as it has,” she said.

She said many of the vendors reported a lot of sales at the event and that there had been a lot of interest.

Many of those included vendors selling Christmas decorations and items.

David Freeman, a Newport artist, was the guest artist for the event. He said he was pleased with the amount of murals he had sold.

“It seems to be a good turnout,” he said.

Artist Eliza Coral, who lives in Greeneville, but if originally from England, said the park had a beautiful atmosphere.

But, at center stage was also the celebration of what the land had once been – a beacon of hope for many black children who walked the halls of Morristown College in one of the only ways they could get an education before desegregation laws.

Throughout the day, there were lessons given on the history of the school and African-Americans in the area.

But, as desegregation ended and colleges began openly enrolling African-American students, the college found itself in financial trouble and its prominence fading.

The college tried unsuccessfully with a partnership with Knoxville College, but it could not sustain itself and the doors were shuttered for good in 1994.

Then years later, the buildings on the site were demolished and buildings caught fire, destroying them.

The city was then able to purchase the property and the idea of Heritage Park was born.

Patrice Conway, who lives in Morristown, said her mother, Edith Thompson Mizner, attended the college. Conway herself worked at the school for a while, at one point acting as a den mother to students.

She said she thinks the work has just started.

She said she would like to see more commemorating of the college at the site.

“I hope and I pray that one day there will be a museum here,” Conway said.

Treece, sitting next to Conway, said she’s glad the city took possession of the property and did something with it.

“I miss the old buildings,” she said. “But, I understand.”

Chris Blue at the Salute To Heritage Park

Chris Blue at the Salute to Heritage Park opening

Chris Blue plays DJ at the Salute to Heritage Park

Chris Blue performs at the Salute to Heritage Park

Dr. Carlton Brown speaks at the Salute to Heritage Park