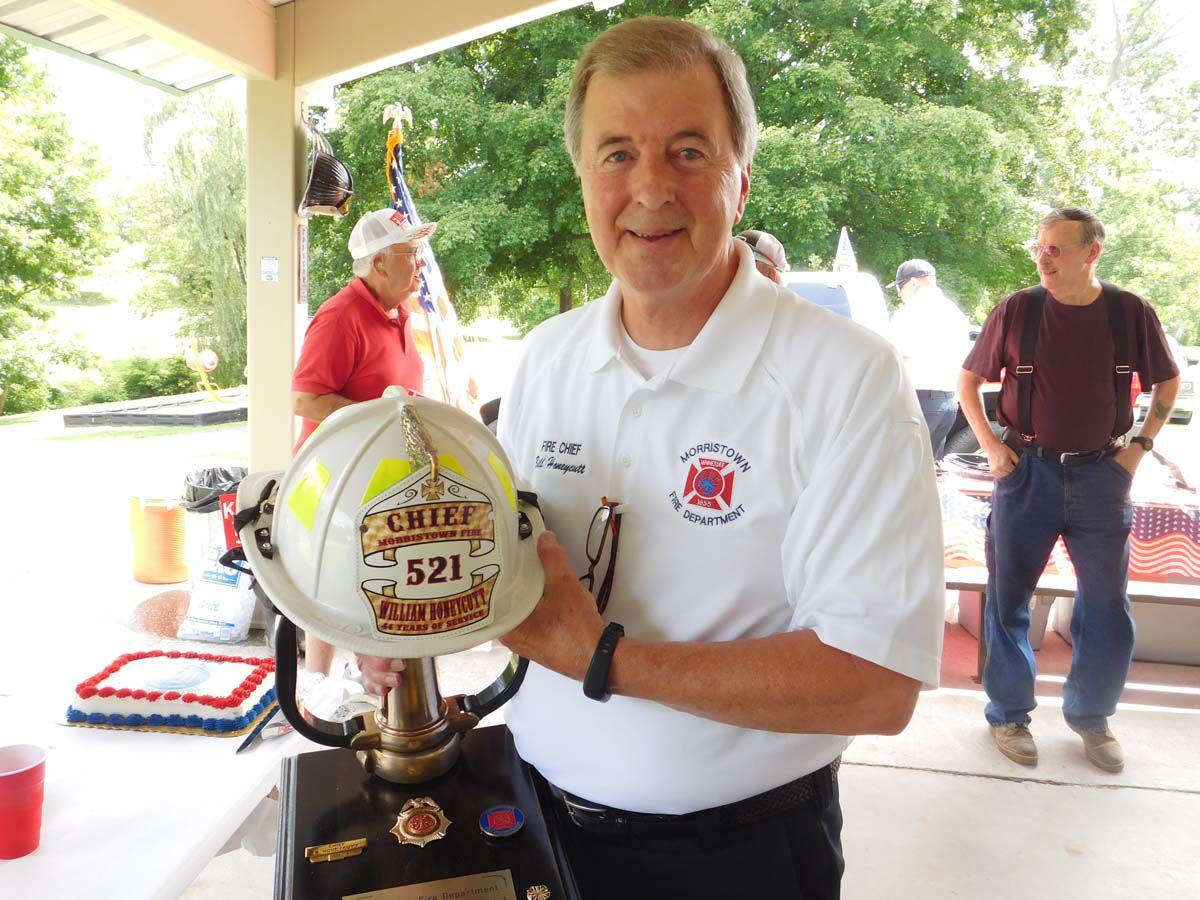 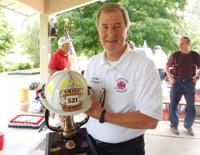 Retiring Morristown Fire Chief Bill Honeycutt accepts his helmet mounted on a stand as a retirement gift. Honeycutt has stepped down and been succeeded by long-time Assistant Chief Clark Taylor. 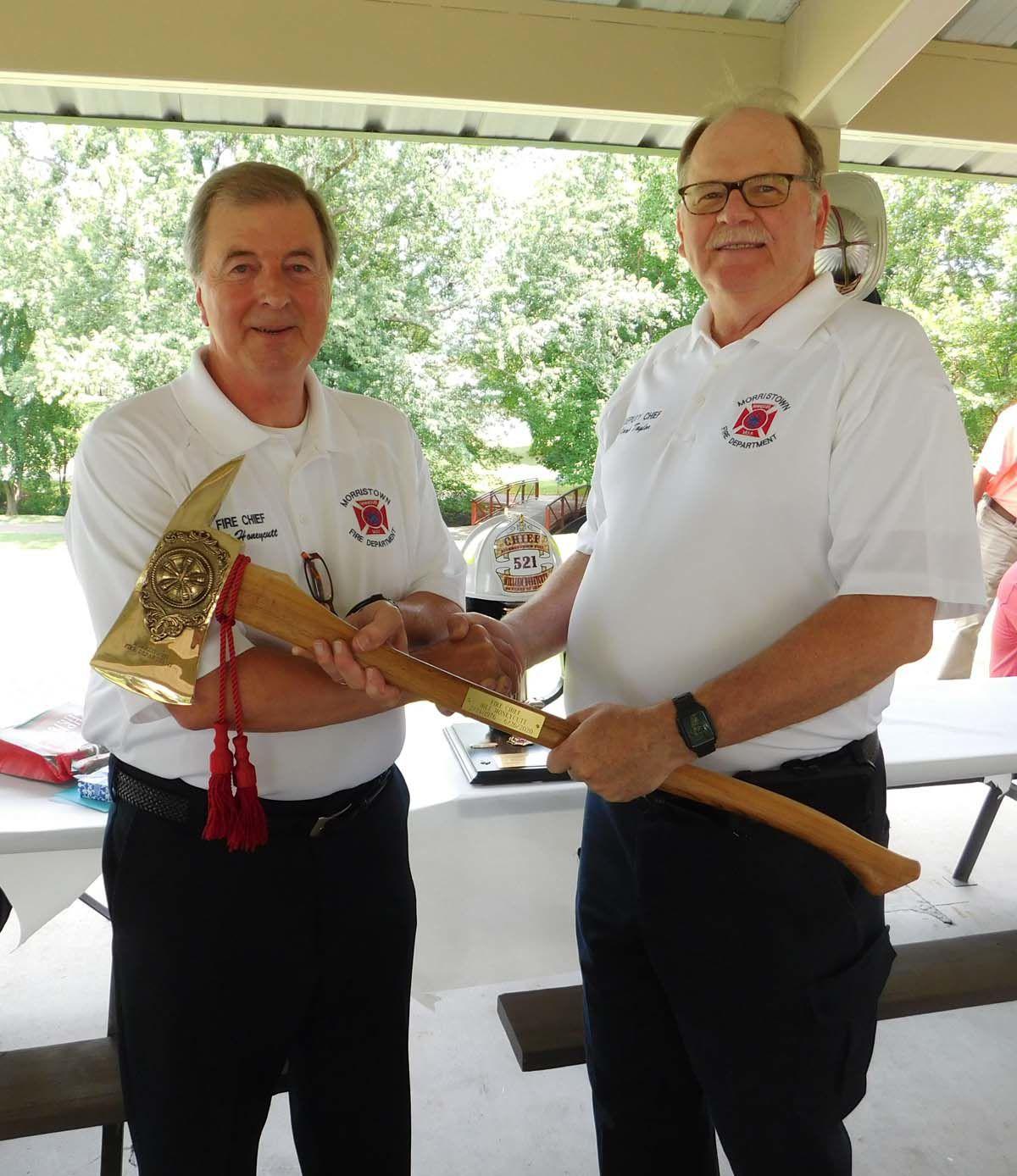 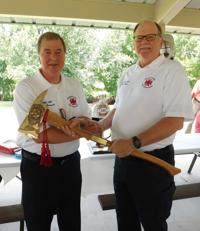 Retiring Morristown Fire Chief Bill Honeycutt accepts his helmet mounted on a stand as a retirement gift. Honeycutt has stepped down and been succeeded by long-time Assistant Chief Clark Taylor.

Bill Honeycutt’s 44-year tenure with the Morristown Fire Department ended with a substantial range of professional accomplishments, along with promising opportunities for the future, but a harrowing experience early in his career almost claimed his life and taught him a lesson that served him well during his 23 years as chief.

Around 1977, shortly after Honeycutt joined the department, firefighters got a late start on a catastrophic blaze at the Petie’s Pool clubhouse, which included a six-lane bowling alley, changing rooms and a concession stand. The interior structure was already swallowed in flames when firefighters arrived.

The chlorine, acid and other pool chemicals that were stored in the basement were ablaze and making what was already a dangerous fire even more perilous. Fire Chief Henry Black tasked Honeycutt and firefighter Ronnie Self with breaching the roof to allow heat and the noxious smoke to dissipate, a standard tactic. .

They attacked the roof with an ax until Black concluded it was a lost cause and ordered Honeycutt and Self off the roof. Honeycutt was first down the ladder. No sooner had Self’s foot touched the ground, the compromised roof collapsed and fell approximately 40 feet into the basement.

In Honeycutt’s estimation, if he and Self had stayed on the roof one minute longer, a rescue operation would have failed.

“We probably would have been buried in the debris,” he said. “I think about it inasmuch as we have faced similar circumstances. You have to ponder when to cease roof operations so you don’t get someone hurt. It’s one of my worst fears. You certainly don’t want to do that.”

Growing up, Honeycutt never seriously considered becoming a firefighter. He wanted a career in law enforcement and took deliberate steps in that direction while serving in the U.S. Air Force, where he was trained as a security officer.

While working as a respiratory therapist at Morristown-Hamblen Hospital, he crossed paths with Henry Black, former Morristown Police Department chief. Black told Honeycutt the police department wasn’t hiring, but that the fire department was seeking to fill a vacancy. Honeycutt got the job.

“I haven’t looked back, I haven’t,” he said. “Sometimes there were rough spots, but it was a great career. I really did love it. I’m happy I stayed, and I feel the good Lord blessed me … I tried to do what was best for the most people. I know it sounds corny, but in the end we do truthfully attempt to accomplish what’s best for the department, the personnel, the city and the taxpayers, the end users of the fire services.

“If people recognized that was the intention, I will have succeeded,” he added. “It’s a team effort. Anything that was accomplished in the end was a team effort that involved not only the fire department staff, but several city administrators, mayors and councils. It’s always a team effort. Our goal was to accomplish the vision and the mission – professional fire services.”

Honeycutt may not have looked back, but he did look sideways. After leaving the Air Force, he remained a member of the Air National Guard, and was the weekend supervisor for the McGhee Tyson Air National Guard Base in Knoxville, an avocation he maintained for 20 years.

The highlight of his law enforcement career was providing security for President Ronald Reagan’s motorcade on two occasions. He also was part of the security detail to protect Nancy Reagan and President Gerald Ford.

Honeycutt started on the bottom firefighting rung, but he did not stay there long. In 1980, he was promoted to driver-engineer and he earned a promotion to lieutenant six years later. He was promoted to fire marshal in 1988 before being named chief of the Morristown Fire Department in 1997.

As he rose through the ranks, Honeycutt’s family grew. He and his wife Debbie have three hildren, six grandchildren and a great-granddaughter.

Honeycutt says Rick Reynolds, the former MFD chief “didn’t leave the cupboard bare,” but he had goals to advance the department when Morristown City Council members hired him. When Honeycutt took the top job, the fire department had about 50 employees. Now it’s 85, bolstered in large part by new stations in West and South Morristown.

Also during Honeycutt’s tenure, the department went from an Insurance Services Office rating of 3 to an ISO rating of 2, which reduces insurance premiums for homes and businesses inside the city limits.

“Morristown has been well-served by Bill Honeycutt’s tenure in our city’s fire department,” said Mayor Gary Chesney. “Chief Honeycutt’s ability to embrace changes in fire safety and implement them in a cost-effective manner is a valuable skill. His calm, professional demeanor provided the kind of leadership a municipality always needs.”

Honeycutt also had the opportunity to groom his successor, Chief Clark Taylor.

“Although I am seriously looking forward to my new role as fire chief, I greatly appreciated serving as Chief Honeycutt’s deputy chief,” Taylor said. “He maintained a vision for the department and did not waiver from it up until his very last day. The department owes him a debt of gratitude.”

Part of what lies ahead for Honeycutt involves travel, an overriding priority on his wife’s bucket list. She wants to undertake a grand tour of the American West and she also has her sights set on Italy, Greece, Great Brittain and Ireland.

“She’s thinking about it more than me, but I’ll obviously go along for the ride.”

For decades, First Horizon Foundation has provided philanthropic support to uplift and enrich communities across the Southeast.