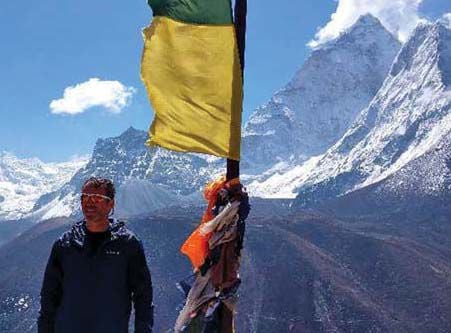 Morristown native John Quillen stands in front of Mt. Everest as he prepares for the ascent. Quillen completed the trek, reaching the mountain’s summit. 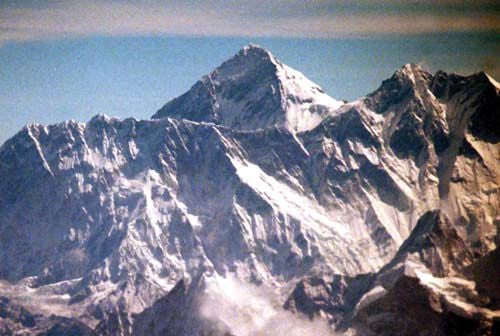 The southern face of the world's highest peak, Mt. Everest is seen above the clouds in this May 13, 2001 photo. The climbing season for Everest will end May 31, but continuing strong winds and heavy snow fall on the peak has forced dozens of mountaineers to postpone their bid on the 8,850 meters (29. 035 feet) summit. (AP Photo/Thomas Easley) 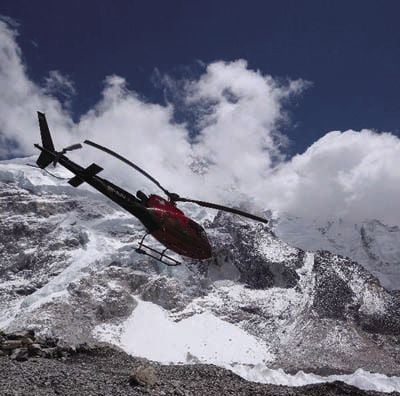 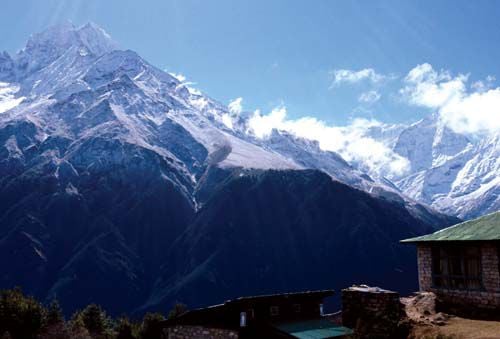 A view of Mt. Everest, provided by John Quillen, who summited the mountain in May.

Morristown native John Quillen stands in front of Mt. Everest as he prepares for the ascent. Quillen completed the trek, reaching the mountain’s summit.

The southern face of the world's highest peak, Mt. Everest is seen above the clouds in this May 13, 2001 photo. The climbing season for Everest will end May 31, but continuing strong winds and heavy snow fall on the peak has forced dozens of mountaineers to postpone their bid on the 8,850 meters (29. 035 feet) summit. (AP Photo/Thomas Easley)

A view of Mt. Everest, provided by John Quillen, who summited the mountain in May.

For 45 minutes, John Quillen and his Sherpa guide Dawa were alone atop the world.

Quillen, a Morristown native and a self-described slow climber at extreme elevations, was still on the ascent when he met the rest of the group returning from their time at the summit of Mt. Everest, the world’s highest point.

Turn around, they said, you’ve missed the window.

But Quillen had come too far, climbed too high for that. He knew himself and though he had never summited Everest before, he knew the mountain.

“I was on a carpet of silk for an hour and every step was just pure joy,” he said. “I knew I could get to the summit. I knew every feature in my head because I dreamed about it for so long. I kept thinking it was another dream … I’m just floating on air, I can’t describe the feeling.”

The upshot of Quillen’s tortoise-like ascent was time alone while being on top of the world, literally.

“I had the summit to myself with my Sherpa, everybody that showed me their summit videos, there’s 20 people in the background,” he said.

For Quillen and his guide, who was making his second summit, there was a feeling of, if not Karma, then maybe recognition. The two had slowed their journey to aid another Sherpa who had his head split open by a falling rock days earlier. Quillen and others put their own very expensive trip in jeopardy to come to the aid of the injured man. Frankly, on Everest, after nearly 60 days climbing, hiking and acclimating to the elevation, that’s not a decision everybody makes.

The delay made them late to Camp 3, but they reached Camp 4, known as South Col, at about the time climbers typically leave to make the long push for the peak. They needed to rest and decided to wait until the next evening.

In all, they spent three nights at South Col, elevation roughly 26,000 feet and firmly in the death zone. At that height, oxygen masks are a required fashion accessory.

“There are very few people who have spent three nights at the South Col,” he said.

They began their summit attempt at 7 p.m. the next night. It was roughly 13 hours later the rest of the group was heading down as they passed Quillen still on his ascent.

“I’m very slow. I’m a little bit older than most of the people and I take my time, much to my Sherpa’s chagrin,” he said. “Everybody passes. It’s now at 8 o’clock and they passed me coming down.

“It took me 14 hours to get the summit of Everest.”

Once there, his Sherpa prayed at the Buddhist Shrine atop the summit and Quillen said a thank you to God.

It seems impossible to consider, but Quillen said despite the whipping winds and subzero temperatures, both men found time to reflect on their achievement, made all the more rare by their isolation.

“We knew what we had. We knew what we were given,” Quillen said. “Why do I deserve to be here by myself, with my Sherpa? Everything that I did, all the hardship, all the money, every bit of it was justified.”

After 45 minutes they began the march back down to South Col where some of Quillen’ s fellow hikers had already given up hope that he’d make it back.

“When I got back to the South Col, they thought they saw a ghost walking in. They thought I was dead. I got to the tent, unzipped and just collapsed in an exhausted way,” he said.

Quillen stresses he was never actually in trouble. He knew himself, knew the weather and knew the mountain. But his ascent was outside the norm, in fact, he’s waiting for official results to see if his was the slowest in the mountain’s history.

“When I get to altitude, I’m just not in a big hurry. I was beat to a pulp. I was never in any trouble, I did get frost bite, but that’s not a big deal. I was not in a life-or-death situation. I was just slow.”

From there it was the descent, which often proves more dangerous than the climb, as mountaineers tend to let their guard down a little on the return trip. One in the group suffered snow blindness; another broke his ankle in an icy crevice.

The dangers overcome on the way up, such as the massive wall of ice or crossing seemingly bottomless crevices on the surface of a glacier using ladders as make-shift bridges, had to be surmounted again on the way back down.

But they did make it safely back.

And, after a brief pause to treat the frostbite in his foot, it was back to the real world. Back to his home and drug and alcohol counseling businesses in Maryville and back to his girlfriend Laurel Dunn, who had to be evacuated from the mountain due to elevation sickness fairly early in the process and spent her time exploring Nepal before making her way to her work in the Dominican Republic.

It was back to a world fundamentally unable to understand the heights he reached, the toll of getting there and, honestly, even the motivation to try. For most people, the place he traveled is every bit as foreign as standing on the moon.

“When I come back, I take up all of my mountaineering gear, go back to regular life and I think ‘how do you explain that to somebody?’” he said.

Quillen said children often latch on better to the idea than adults. Maybe it’s because their imagination hasn’t been stifled, all things remain on the table. They can be a president, an astronaut, a superhero or a princess, so talking to a man who has climbed to the top of the Earth doesn’t seem so strange.

It is appropriate then, that Quillen’s own journey to Everest began not at South Col, not even in Katmandu, but as a child with neighbor and mentor Pete Prince, a noted Smoky Mountain historian who took Quillen on a hike up Mt. LeConte.

“LeConte, that’s what started it for me,” he said. “Climbing up to elevation and seeing snow on the rhododendrons ... I was 9 years old, it just clicked with me. I loved this.”

By the time Quillen was in his 20s he was into rock climbing and hiking. Then came Mt. Rainer in Colorado and Denali in Alaska.

“I met some people on Denali and got into ice climbing, spent the next few years going out to Colorado and other places to chase ice,” he said.

The East High grad has climbed mountains in Central America, Pakistan and other peaks in Tibet. He’s chased high altitude climbs all over the world.

“I’ve been fortunate,” he said. “I met my best friends doing this. We just have that bond.”

Now he belongs to a more exclusive club, though he says membership relies on a degree of luck.

“This was an exceptional year on Everest,” he said. “More people summited than ever, there was a longer period of stable weather. We threaded the needle. We just got lucky. Everest is a game of luck.”