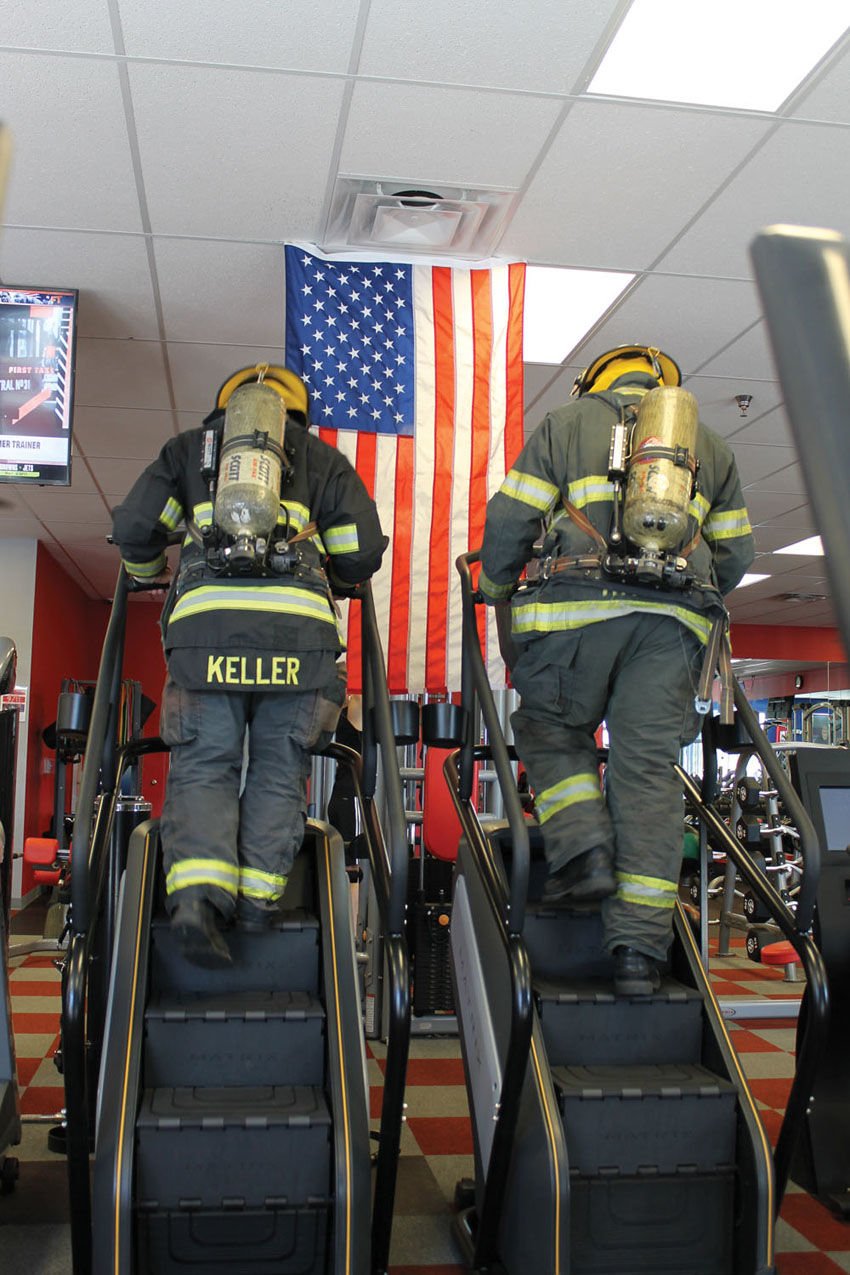 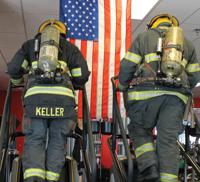 Steven Keller and Nathan Atkins of the Morristown Fire Department climb stairs in honor of their fallen comrades. For more photos go online to www.citizentribune.com. 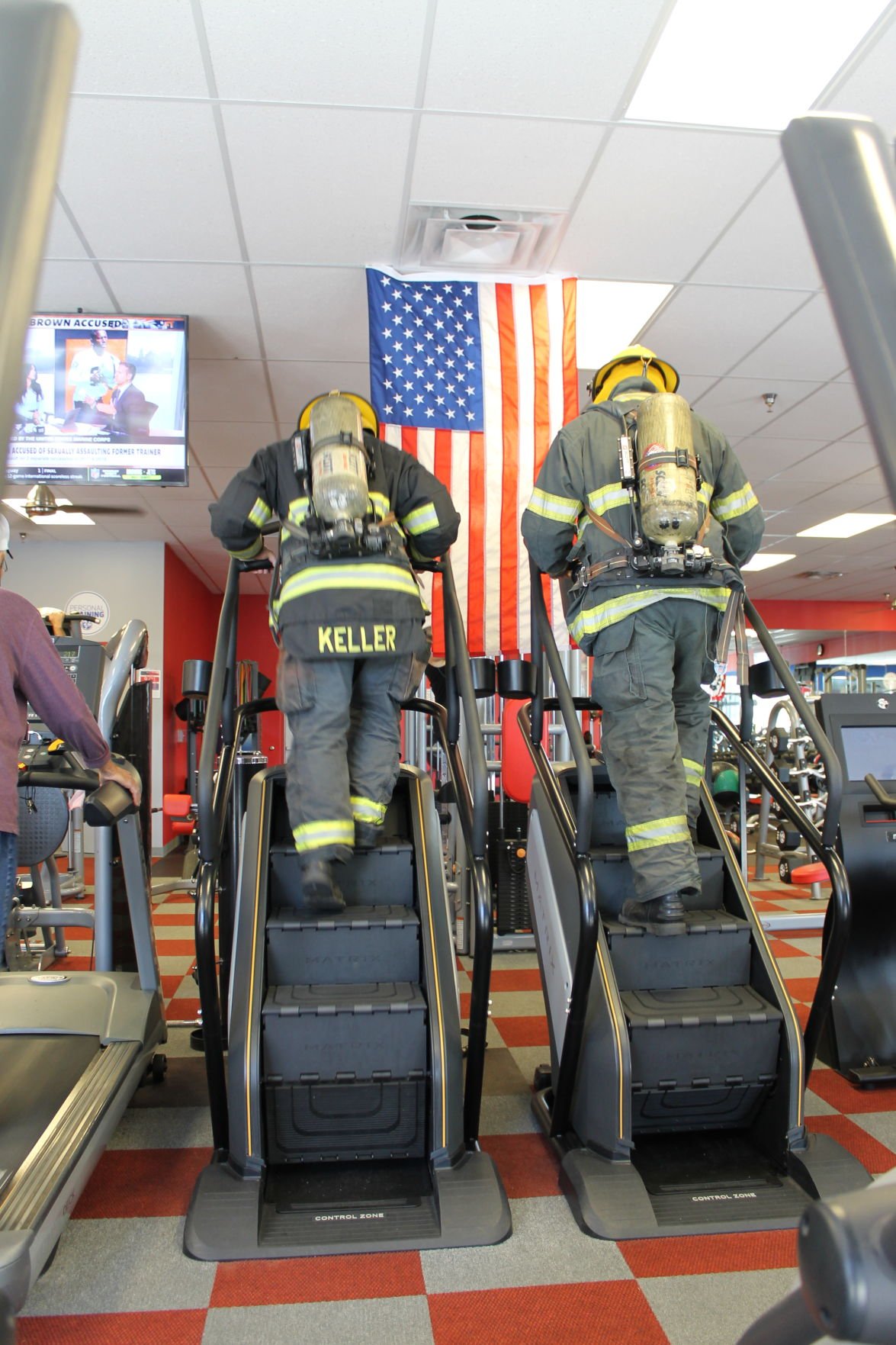 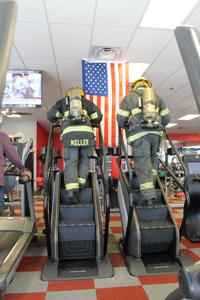 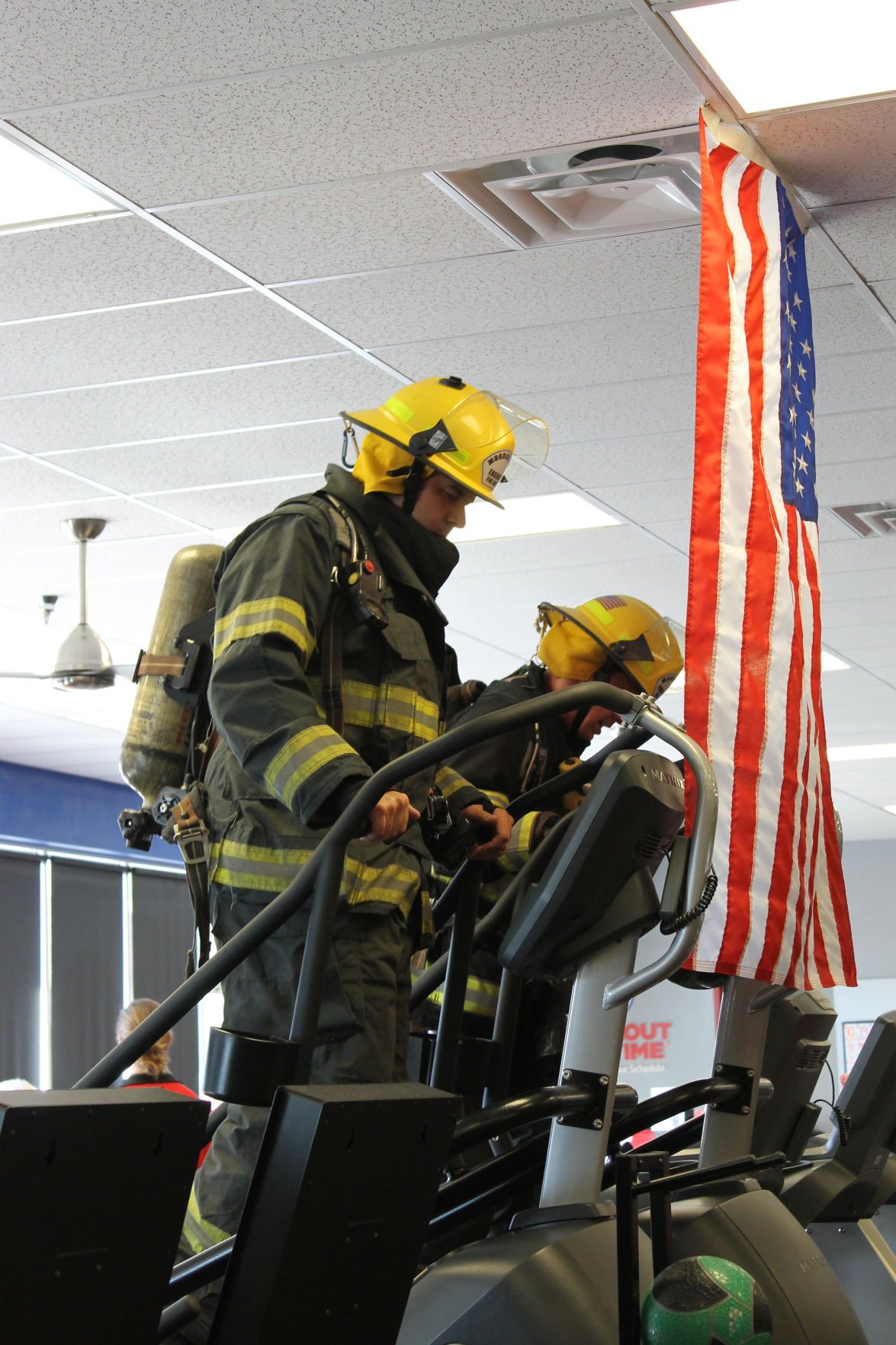 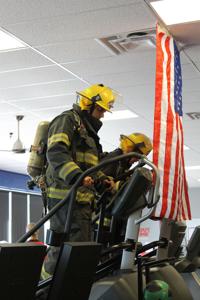 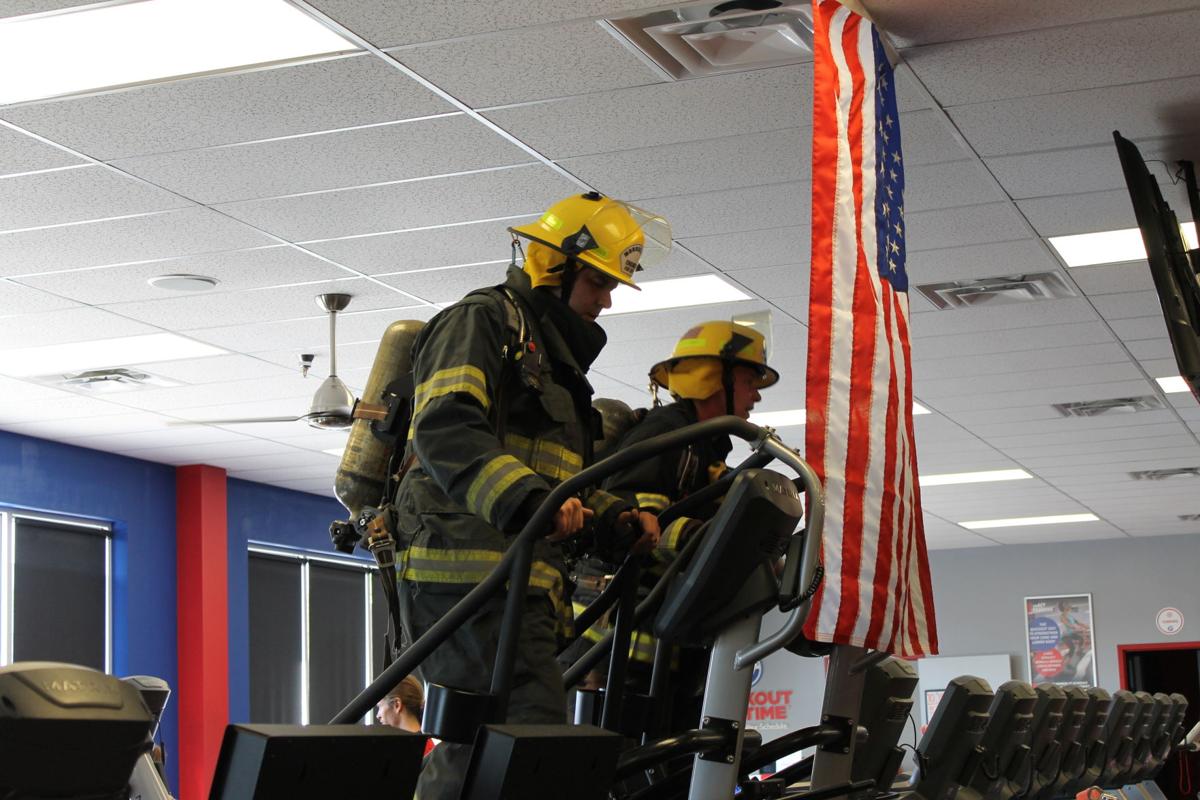 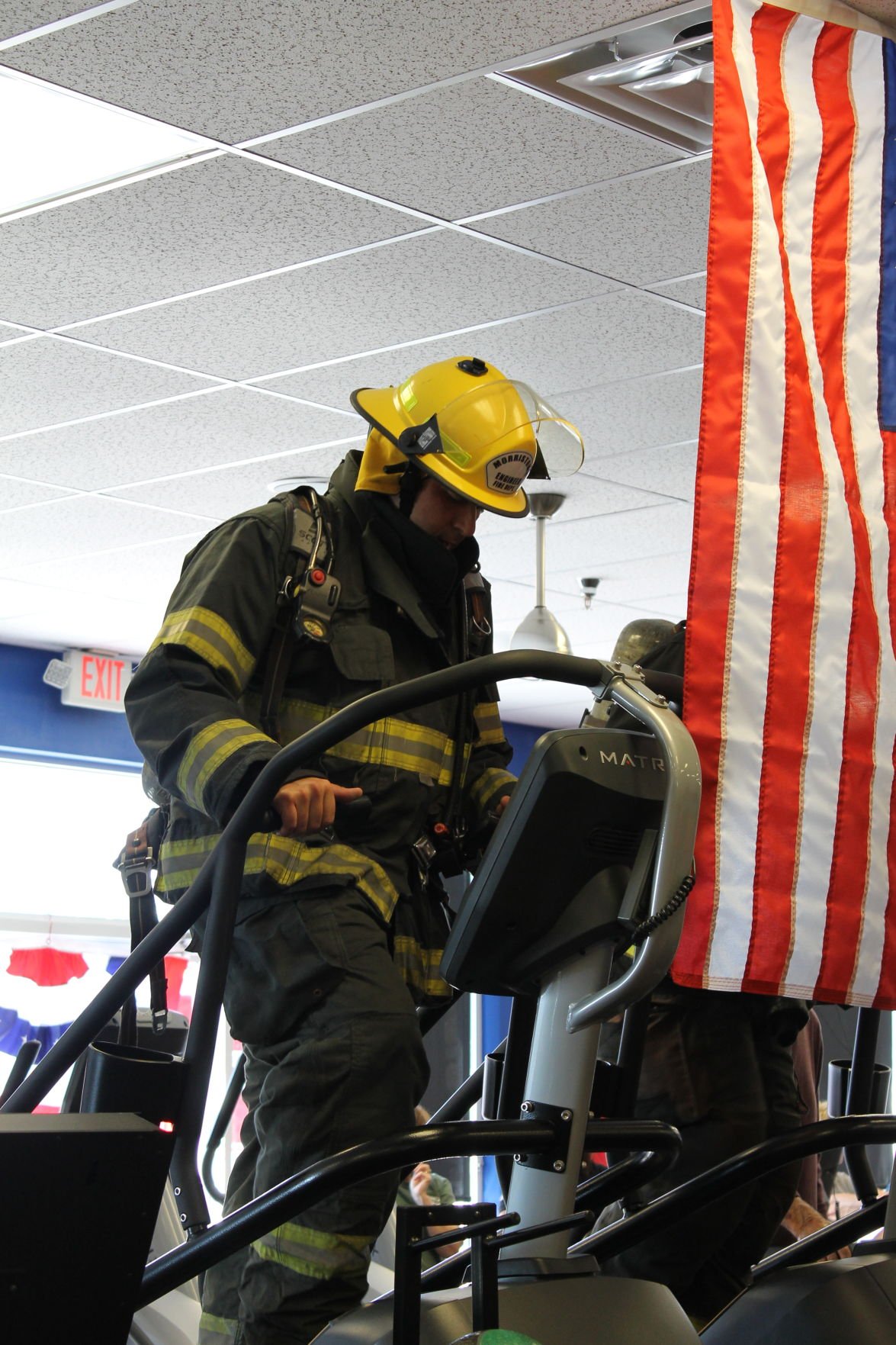 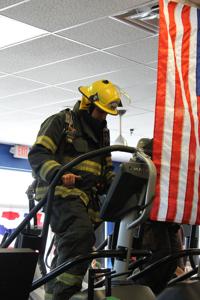 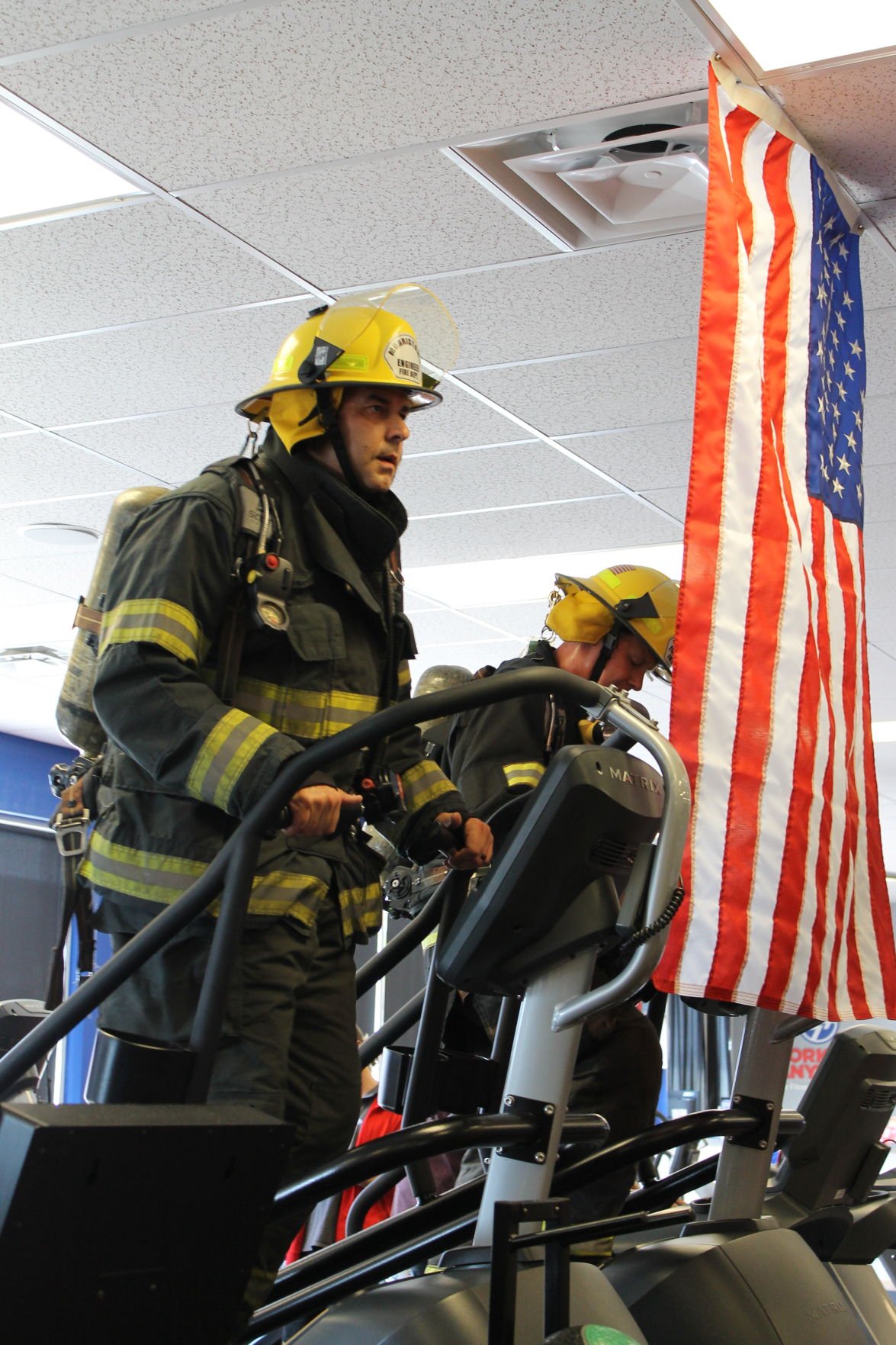 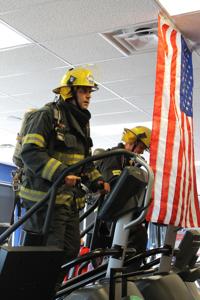 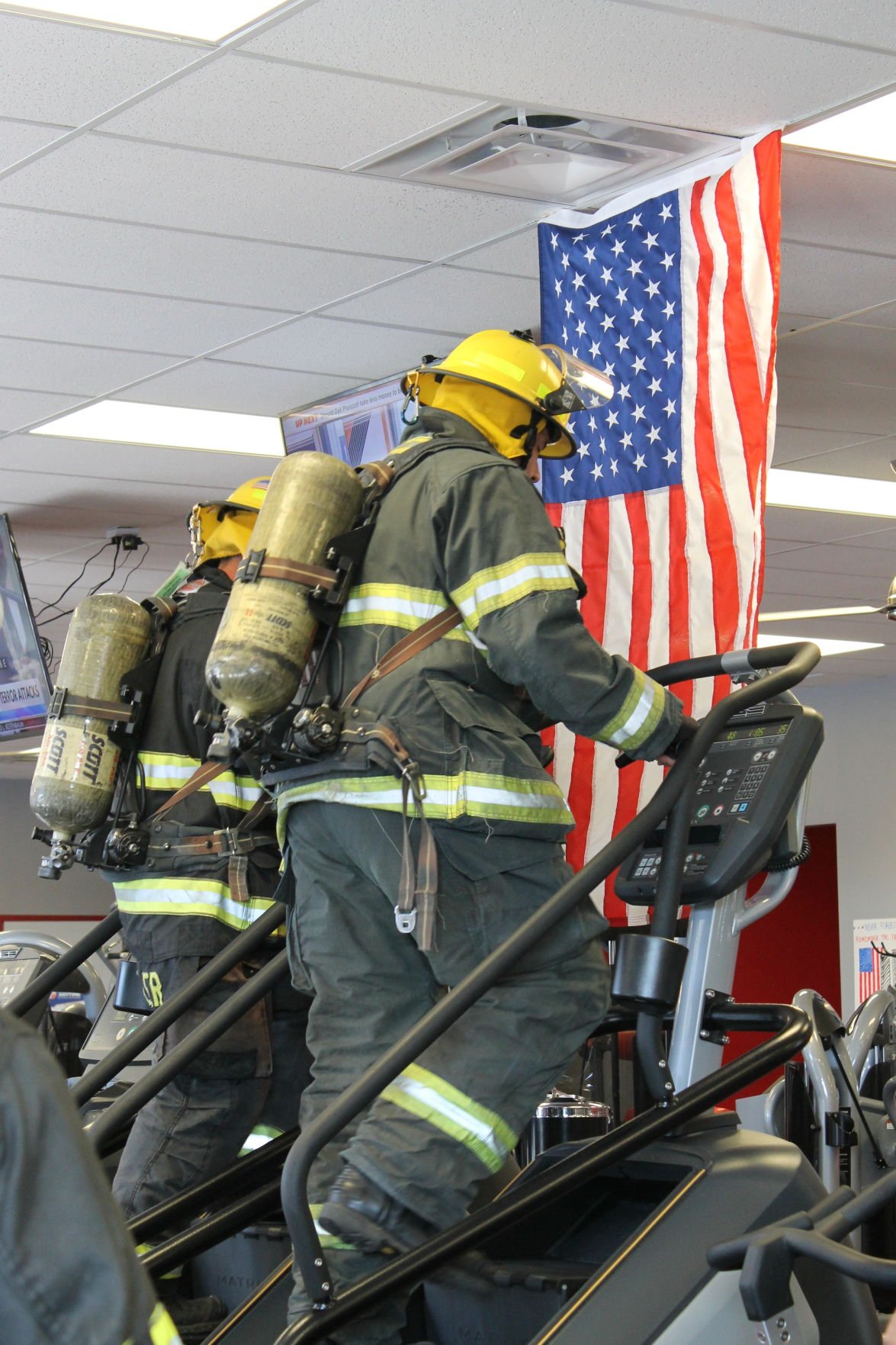 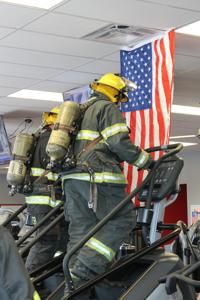 Steven Keller and Nathan Atkins of the Morristown Fire Department climb stairs in honor of their fallen comrades. For more photos go online to www.citizentribune.com.

On Wednesday, the Morristown Fire Department took time off their schedules to pay tribute to those who risked and lost their lives trying to save others during the Sept. 11 attacks at the World Trade Center in New York City 18 years ago

The firefighters gathered at Workout Anytime on West Andrew Johnson Highway, and tackled the 110 flights of stairs on a stair climber, retracing the steps their brethren bravely took on that day.

“It’s a total of 110 flights, which is about 1,500 steps,” said Workout Anytime manager Joshua Loveday, whose location held the event for the third consecutive year. “Our former manager, Edie Rhodas, came up with the idea two years ago. After that, the corporate office (in suburban Atlanta) took the idea – and now all the stores nationwide do it, but it all started at this store.”

With an American flag in front of them, MFD members took turns taking the arduous 1,500 steps in full gear, just as their fellow firefighters did. Deputy Chief Clark Taylor said what their counterparts at the New York City Fire Department did that day was beyond heroic, and it was an honor to walk those flights of stairs in their memory.

“I cannot imagine what was going through their minds when they were climbing those steps. They were climbing up while everyone else was running down,” he said. “I want to thank Workout Anytime for letting us use the equipment and inviting us to do this.”

Taylor also said the fire department has taken part in other 9-11 events throughout East Tennessee in past years.

“We’ve also participated in a stair climb in Kingsport over the weekend,” he said. “In past years, we’ve had some guys climb the Sunsphere in Knoxville.”

Derrick Mullins, an employee at Holston Army Ammunition Plant in Kingsport, was invited by the MFD to participate in the stair climb – and completed all 110 flights in full gear. The 26-year-old said he had to complete the full track to honor the heroes of the FDNY.

“It puts it in perspective what those guys did. Once they got to the top, they were carrying the injured and dead after running those steps,” he said. “I wasn’t going to stop, because they couldn’t stop. That should mean something to the rest of us.

“This was the best we could do to honor them.”

Wayne Gourley and his wife, Susan, have owned the Morristown location of Workout Anytime for a year. Wayne witnessed the construction of the World Trade Center while stationed at Fort Monmouth as a member of the Air Force in 1967, and it was an unfathomable tragedy to see the towers fall in the worst terrorist attack in American history.

“(The attacks) were a shock to everyone. When the first plane went into the WTC, everyone thought it was an accident,” he said. “Once the second one went through, we knew that wasn’t an accident. It was a horrible day.

“The firefighters went in without any regard for their own lives. We all became New Yorkers that day.”

Loveday said the company’s stair climb is a symbol of Workout Anytime’s support of America’s heroes.

“Workout Anytime is very nation-focused. Our CEO’s are veterans, and they’re always looking for any way to honor veterans,” he said. “Anything that shows patriotism is something they want to do. It’s a statement to the community.

“Workout Anytime isn’t just a place to work out. It’s not a franchise that wants to just make people healthier. We want to be a part of the community, and make lives better.

Mullins said in the end, it’s about respecting those who lost their lives.

“There was a different feeling today. I wanted to show respect the only way I can,” he said. “After the attacks were over, the first thing (FDNY) did was raise the American flag.