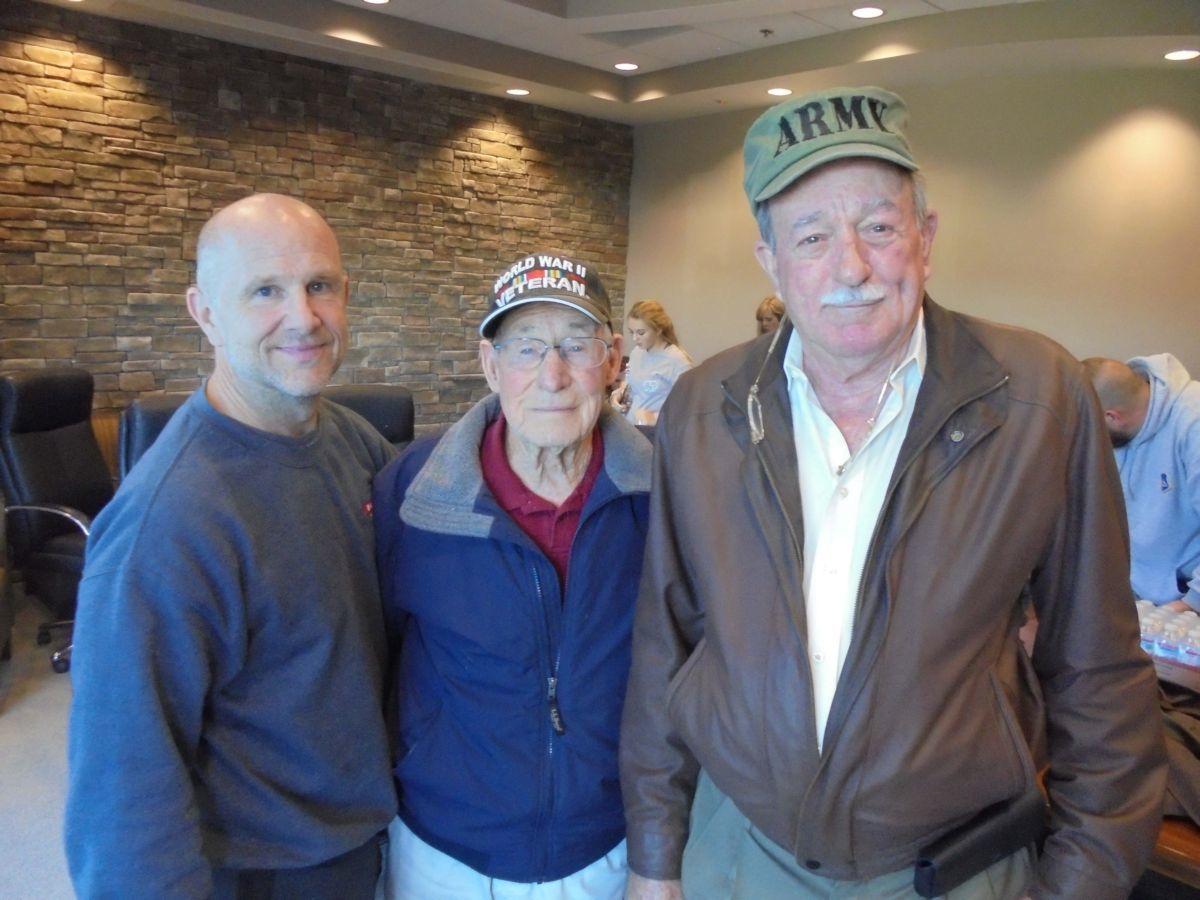 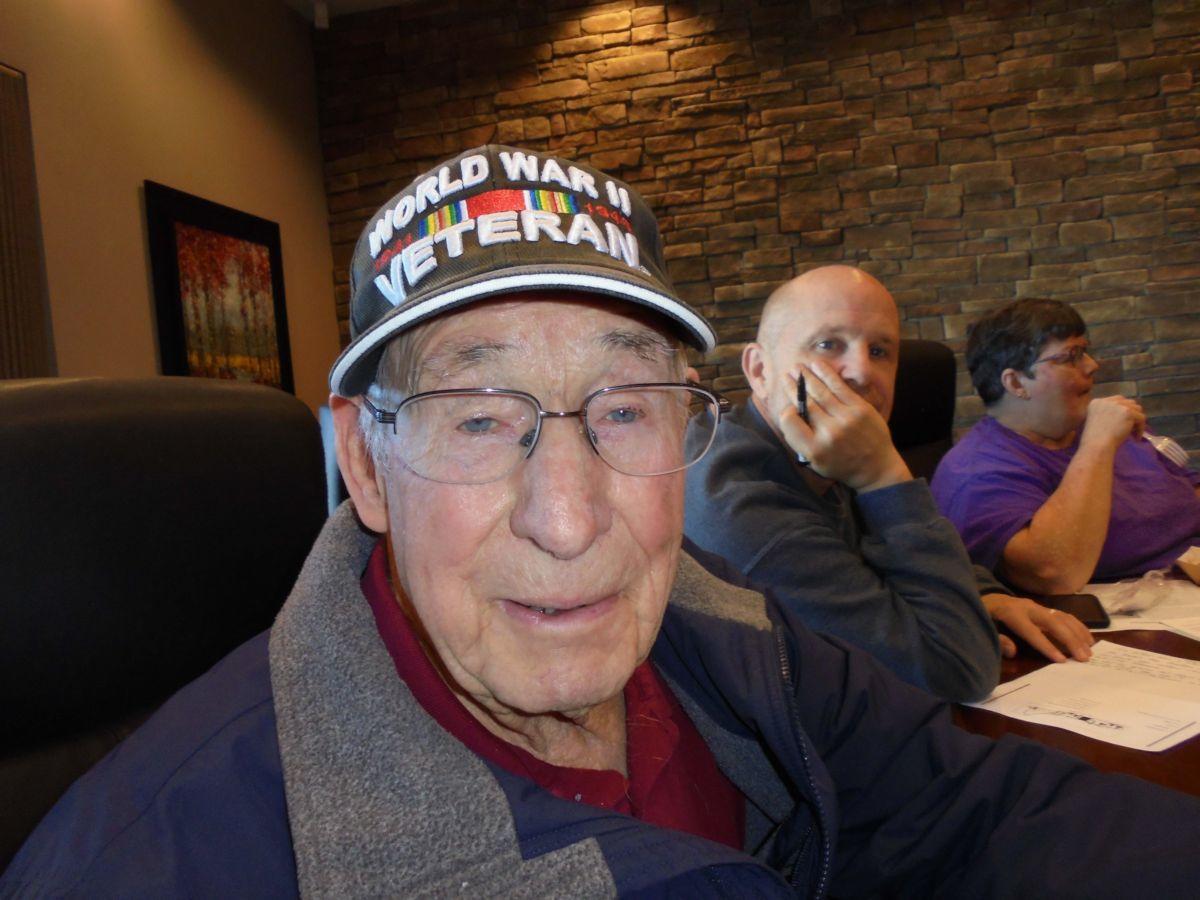 “Several people told about Mr. Potter going through that B-17 bomber like he was way younger than his nearly 97 years!” said Karen Collins, the president of the Experimental Aircraft Association, which recently brought one of the last flying B-17s to Morristown.

Karen was accurate in her description. Joel Potter is a youthful, intelligent, energetic and personable fellow who is a veteran of a rarely heard of theater of World War II.

During that war India was still a part of the British Empire and the China Burma India Theater is sometimes known as the forgotten theater of the war. India sent over two and a half million troops to support the British during the war and also provided bases for the American support of China, where only two percent (250,000) of the total American service members would be stationed. Joel Potter is one of the rare remaining veterans of that theater.

Joel was born Jan. 25, 1923, in Herald (now Coburn) in Virginia’s Wise County, and was the youngest of John Sherman and Pearl Hillman Potter’s two daughters and two sons. Mr. Potter went to World War I at age 15 and then worked with the White Ritter Company in Fontana, North Carolina, before moving to a job in Banner, Virginia, where he guarded the Flemming Coal Company’s equipment.

Young Joel started school at Banner Elementary until the fifth grade, when he moved to the large brick school in Coburn. Musically talented he played for Eleanor Roosevelt at the White Mountain dedication in 1937 and played the fiddle over radio station WOPI in Bristol from 1937 through 1939. He left school during his senior year to join the military. Heading to Norton, then to Roanoke to the recruiter’s door, where he said he wanted to join the Army Air Corps (now the Air Force). Enlisting on March, 7, 1941, he was sent to Florida, where he helped build the first barracks at Morrison Field at West Palm Beach.

The U.S. entered World War II nine months after Joel had enlisted. Two weeks after the start of the war, Joel, then a Private First Class, took a train to the Cow Palace in San Francisco. The arena, completed in 1941, was being used to process soldiers into the Pacific Theater. Boarding the converted luxury ship Mariparosa, Joel sailed for Perth, then Melbourne, Australia, and on to Ceylon (Sri Lanka) and India. There he joined 3,500 other troops who were first settled into a dirigible hanger originally built for the Hindenburg. The troops built their own barracks for their new supply depot. A repair squadron worked on the damaged P-40B War Hawks, along with other planes which were being flown by American pilots against the Japanese. Joel was assigned to a depot supply unit in Karachi.

Those first pilots aiding the Chinese were the “Flying Tigers,” the nickname of the First American Volunteer Group (AVG) which was composed of pilots recruited from the U.S. military. The nose art on their planes featured a large shark face to identify them. The unit was composed of roughly 90 warplanes divided into three squadrons and first saw combat Dec. 20, 1941, shortly after the attack on Pearl Harbor. AVG pilots received credit for destroying 296 enemy aircraft while losing 14 pilots to combat. In the spring of 1942, the AVG was inducted into the United States Army Air Force and beloned to the 14th Air Force.

“We worked on the P-40s that came from Burma (Myanmar),” Joel said. “They had just been tied together when they came to us. Then they flew them back over The Hump to Gen. Chennault. I spent two and a half years in Karachi (now in Pakistan) and Calcutta. I was with about 10 others when we met Col. Tex Hill in Calcutta, where he was being sent back to the states to train pilots. He wasn’t happy about it. (Tex Hill became a double ace with the Flying Tigers – and became a triple ace before retiring from the Air Force as a general.)

“When I came back from Bombay, we took a ship, the USS Billy Mitchell, to the Marshall Islands, where we picked up the First Marine Division, then after a quick stop at Hawaii, back to San Diego. From there I went to Byrd Field in Richmond, and on to Selma Field in Louisiana, before being discharged at Fort Smith in September 1945. After I was discharged I went back to Coburn where my mother and father were glad to see me. They asked me why I hadn’t written more and I told them it was because I couldn’t because of so much censorship to my letters.”

After returning home, Joel worked for a year at the Miles Lawson Coal Mines, but quit after a slate fall. He then operated a hotel and restaurant in Coburn before joining his father in a 200-acre dairy farm. After two years he left for Wright Patterson Air Force Base to work as a management analyst in the material command, which was followed by a job in the logistics command. Joel retired in 1976 and moved to Kingsport, where lived for 23 years.

Leaving Kingsport, he moved to the Venture Out campground in Cosby before building a house in Sevier County. A further move was to Dandridge. Having married the former Mary Austin in 1946, they had a daughter, Rita Jo (Ronnie) Hickox. Mary passed away in 1976 and Joel later married his high school sweetheart, Joyce Parsons, who passed away in 1999. He is now married to the former Judy Phillips, who has sons Jim, Dan and Bob. Joel also has four grandchildren and nine great-grandchildren.

“I bought my first house for $900 and later sold it for $3,500 and used that money to rebuild, where I dug a basement by hand,” Joel continued. “I recently discovered a daughter I didn’t know of, Lauren Keys, who lives in Indiana, and we are getting along fine. I have a gym in my basement and I exercise every day, but I do have some trouble with my eyes. To know how long you’re going to live, you have to look at your genes. My dad lived to be 89, my mom to 94, my brother to 92, my sister to 96, and my youngest sister is 87. Don’t forget to pray every once in a while and hope you get a little guidance.”

“He still does a vegetable garden!” added step-son Jim.

“Back When” will be taking some time off during the month of December and hopefully be back to begin it's 32nd year during January. Merry Christmas and Happy Holidays to everyone!