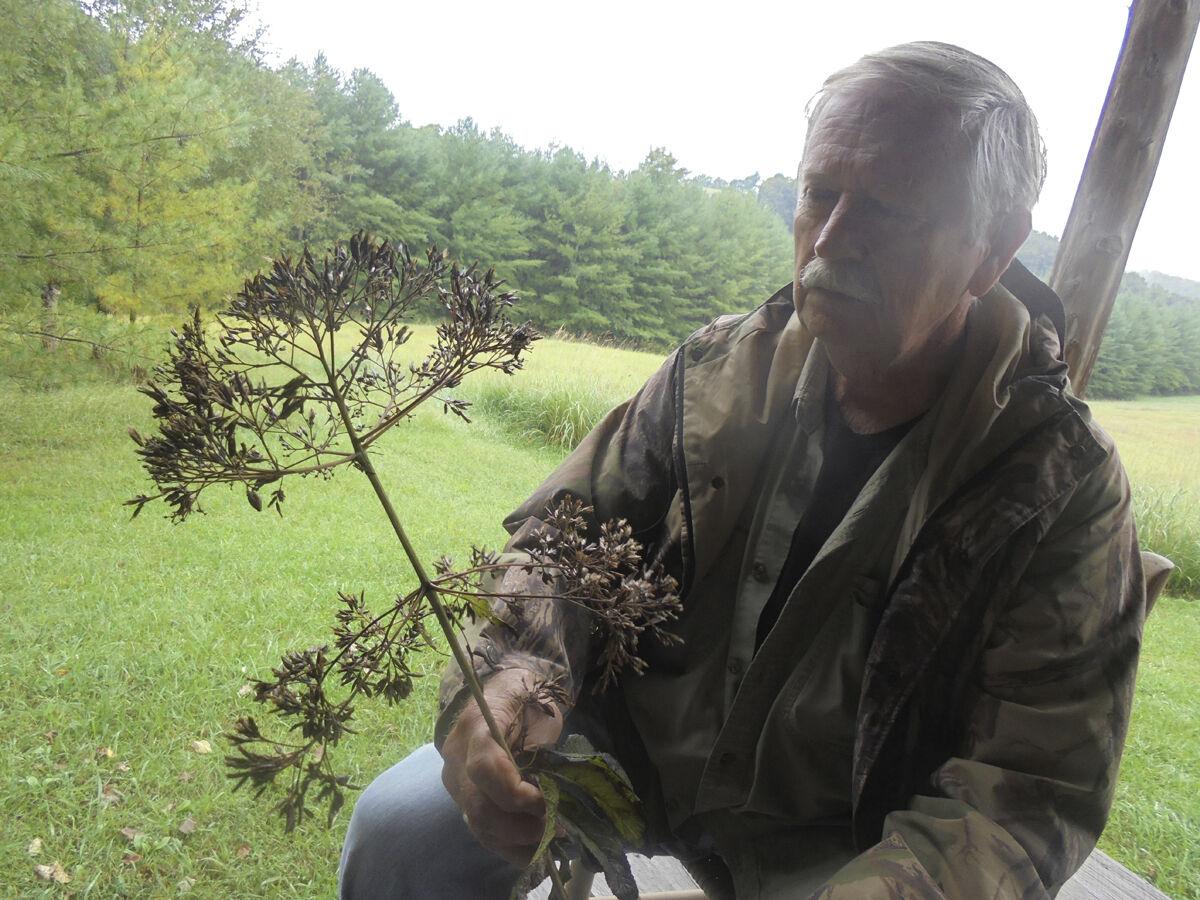 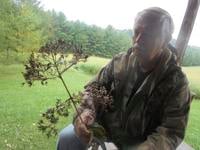 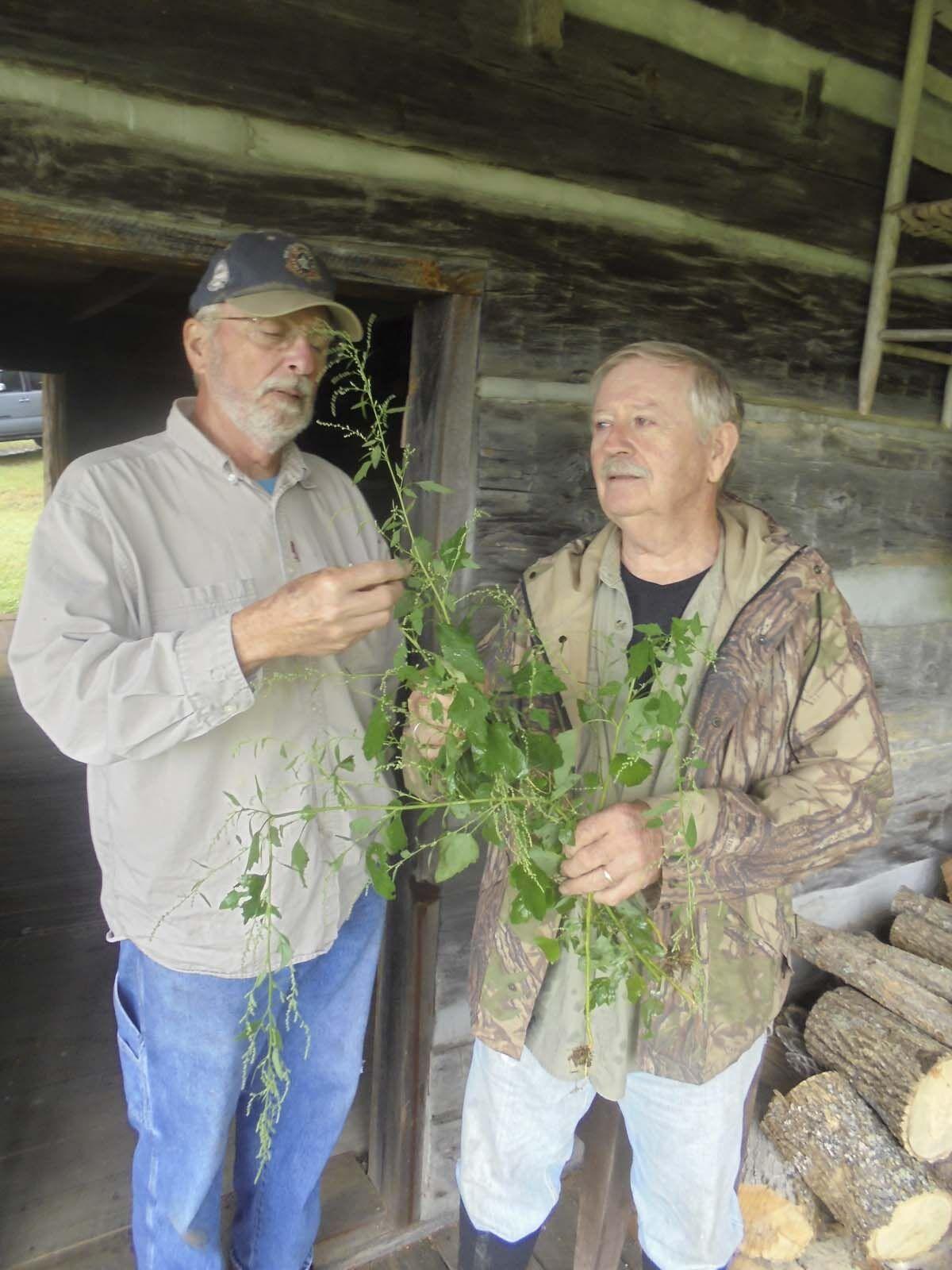 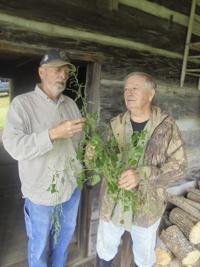 A rainy early fall morning was the perfect time to visit Doug and Cathy Scott’s home in eastern Hamblen. Their sensible but well-kept house is unseen from the road or neighbors but has a perfect view of the Smoky Mountains. It’s my idea of a wonderful place to live. Cathy has decorated their home tastefully and interesting, while Doug has restored several original log cabins set behind the house.

Several years back I spent a day in the northeastern Tennessee mountains with Doug where he identified almost every plant and tree we passed while traveling through the sparsely settled area. It amazed me when he could tell about practically every plant we passed. For our recent visit, Doug agreed to show me the many useful plants that could be found on his farm.

Along on the visit was Doug’s close friend, former Judge Dennis Inman. The two have been good friends for many years and both share a high intellect and love of learning, and also strongly value the knowledge of a wide array of other folks who make up our culture. As young friends in an earlier day, the then-young fellows had no idea they would end up as a Wildlife Resources Agency supervisor and a federal judge. Doug possesses a rare and valuable skill I’ve found unmatched even among the mountain folks that I’ve visited. Coy Collins, the father of Hancock County’s Scott Collins, learned about plants and their uses from his ancestors and came close to being a match for Doug.

In an earlier time, people were often so isolated they had to depend on herb doctors and midwives for their well-being, and they often looked to nature for their food and medicines. What they hadn’t brought from their old country, they had to learn from the Native Americans. Today, modern medicine is so advanced and so widely available the knowledge of edible and medicinal wild plants is very scant. Our visit began in front of the warm fireplace in one of Doug’s old cabins, before we moved to the porch as the day warmed up.

“I’ve known Doug (“Clyde”) for 55 years,” Dennis said as Doug was away from the cabin. “We have different minds, but think alike. Two things we have in common are hunting and planting trees. On our trips through the woods he’ll point out plants and we’ll uncover things. I have two grandsons, Sean and Samuel, who ask a lot about nature, and I have to tell them to go ask Clyde. When the boys are riding with their grandparents, Wayne and Linda Greene, and a nature question comes up, Clyde has always been the go-to person.”

Doug returned as we were talking and continued: “My passion and interest has always been in biology and the outdoors. My great-granddad was known as a herb doctor back in Kentucky. The same chemicals found in trees and plants are related to all the stuff living on our planet. We have a diversity of plants here in southern Appalachia that is second only to the diversity of rain forests. I like to learn what plants the animals use. The Cherokees had a use for almost every plant that grew, and they were not unique among the other Indians in that knowledge. The Cherokees already knew that dogwood bark was good for malaria. The first settlers had only had what they had brought over and had to learn about the plants and how to use them from the Indians. Many of those early people believed In the Doctrine of Signatures, which told that the shape of a plant might reflect on what it would help.”

Doug asked I add a warning to this article, which is not even a basic primer on the use of wild foods and medicines. Several plants are similar in appearance, but may be highly poisonous, while some parts of useful plants are also dangerous. Before using any wild plant, a novice should find a serious authority on their use. Any use of folk medicines should be carefully monitored. Doug is a voracious reader, and I would take his recommendation of the book, “Peterson’s Guide to Medicinal Plants” seriously. Prior to our visit, and with the rain coming down, Doug had already collected several large bucketfuls of helpful plants to show us, a good number of which space in this column prevents them from being mentioned.

“Boneset leaves can be used as a tea for fevers and arthritis, and a poultice can be used for broken bones and bruises,” he showed. “Mullein could be used as a toilet paper, but a tea can be made for upper respiratory problems and coughs, but the seed are poisonous. Greek soldiers carried yarrow in a bag to stop blood flow. It grows in Greece as well as here. A tea made seeping golden rod leaves in water helps in allergies, bronchitis, colds and kidney stones, while its flowers make a yellow dye.

“Joe pye weed was found by a herb doctor up north and is good for typhus, arthritis, fevers, V.D., and its leaf poultices are good for kidney stones. Cattails are very handy. You can eat the root shoots like celery, and the roots are starchy. Indians used soft material from a ripe bulb to line their moccasins for warmth. Slippery elm (one of my favorites – word has been passed down of an old Dr. Livingston who had a cure for melanoma that used slippery elm) has a rough leaf like a chestnut and its leaves can be used for a poultice. The bark is antibacterial and used to be carried in pharmacies. There are three kinds of elms that are common locally.

“Jerusalem artichoke is from the sunflower family and has edible tubers and flowers. Tea from its leaves can be used as a fever reducer. Willow bark has the same chemical found in aspirin and the strongest reaction comes from its roots and outer and inner bark. Poke weed is poisonous, but the early shoots can be eaten after being boiled twice with the water thrown out. The polk berries can be made into a paint when mixed with lard (or soured milk). Sumac berries are used as a spice overseas. A tasty lemonade can be made from it after it’s strained and sugar is added to it. It’s also used to tan leather. There are five types of sumac locally – staghorn, smooth, winged and fragrant. The poison sumac is dangerous and grows in swampy and wet bogs, and has white berries. Lamb’s quarter seed can be dried and ground into a good flour.

Curley dock and dandelion are edible, while sassafras roots make a good tea that is a blood pacifier and tonic. Its twigs, along with sourwood twigs are good to chew on a long walk. Spice bush is common in Southern Appalachia and its spicy leaves and small twigs make a tasty tea, while the red berries make a substitute for allspice. The leaves from wild lettuce are edible, while the sap is good for warts and skin. Some have said that the sap is a substitute for morphine. Pawpaws are a large tasty fruit, which is also said to have anti-cancer properties. Indians would crush the seed to keep lice away, and the inner bark makes great cordage. Walnuts are tasty and useful, while walnut leaves can be put in kennels to keep fleas away. Osage orange (aka “hedge apple” or “bodark”) has a fruit that kills cockroaches as well as a strong and rot-resistant wood that was used for Indian bows and fence posts.

“Dogbane is from the milkweed family and the milky sap can be used for mange on dogs, while the crushed leaves make a tea and strips from the stems make excellent cordage. Butterfly weed, also from the milkweed family, is listed under the species name ‘Asclepius’ (the Greek god of medicine). The root treats pleurisy, while a leaf poltice is for snake bites and a dried leaf and root police is for sores and wounds. Catalpa leaves also make a good poultice. Jewel weed (touch-me-not) has orange and pale versions that have edible leaves and make good poison ivy medicine on early contact. Pine sap is used on sores and mixed with ashes to make a glue. Agrimony has the little round stickers that get into cat fur and were ground up to be used for gunshot wounds because of their silica content. The Kentucky coffee tree was used as a coffee substitute during the Civil War, and is used as a fly poison.

The visit with Doug and Dennis reinforced to me there is more to the real world than sitting behind a keyboard.