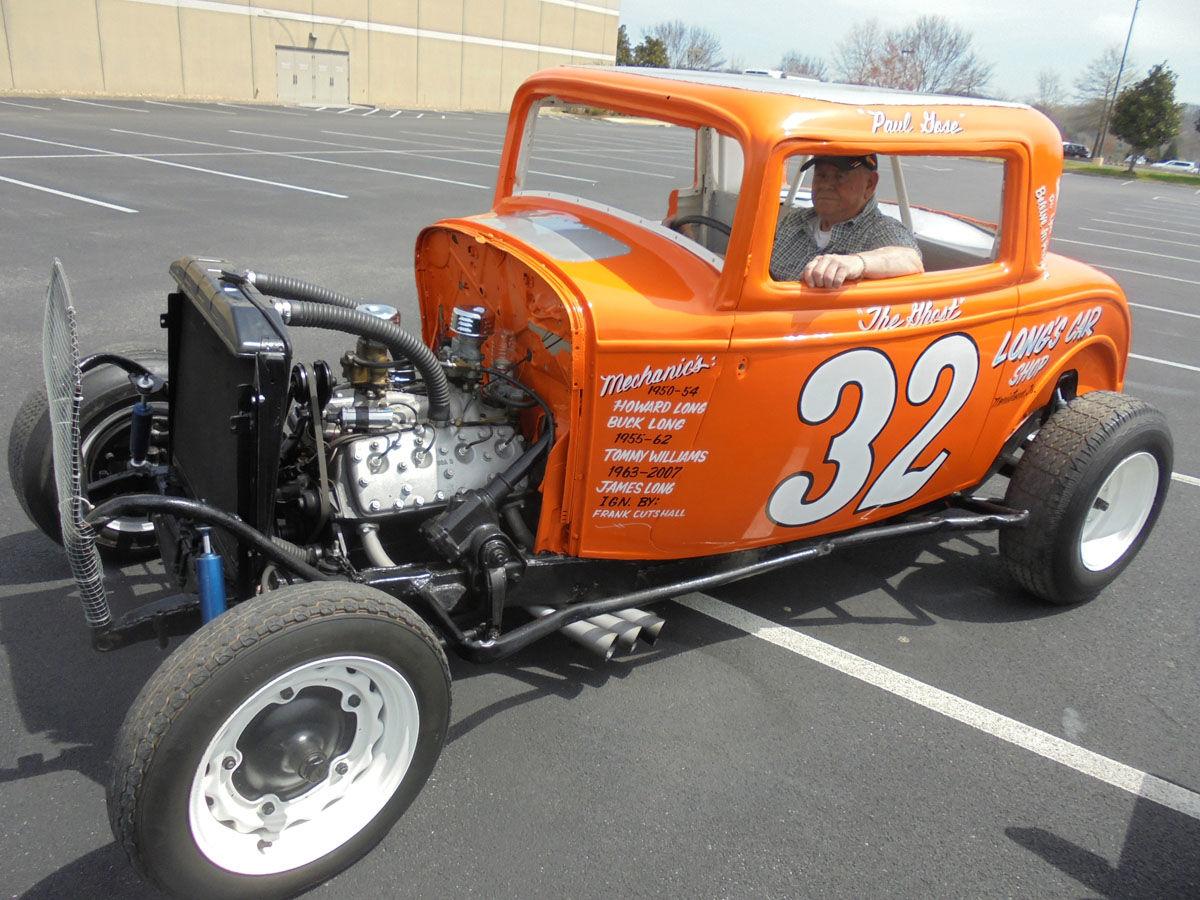 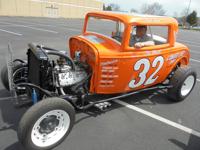 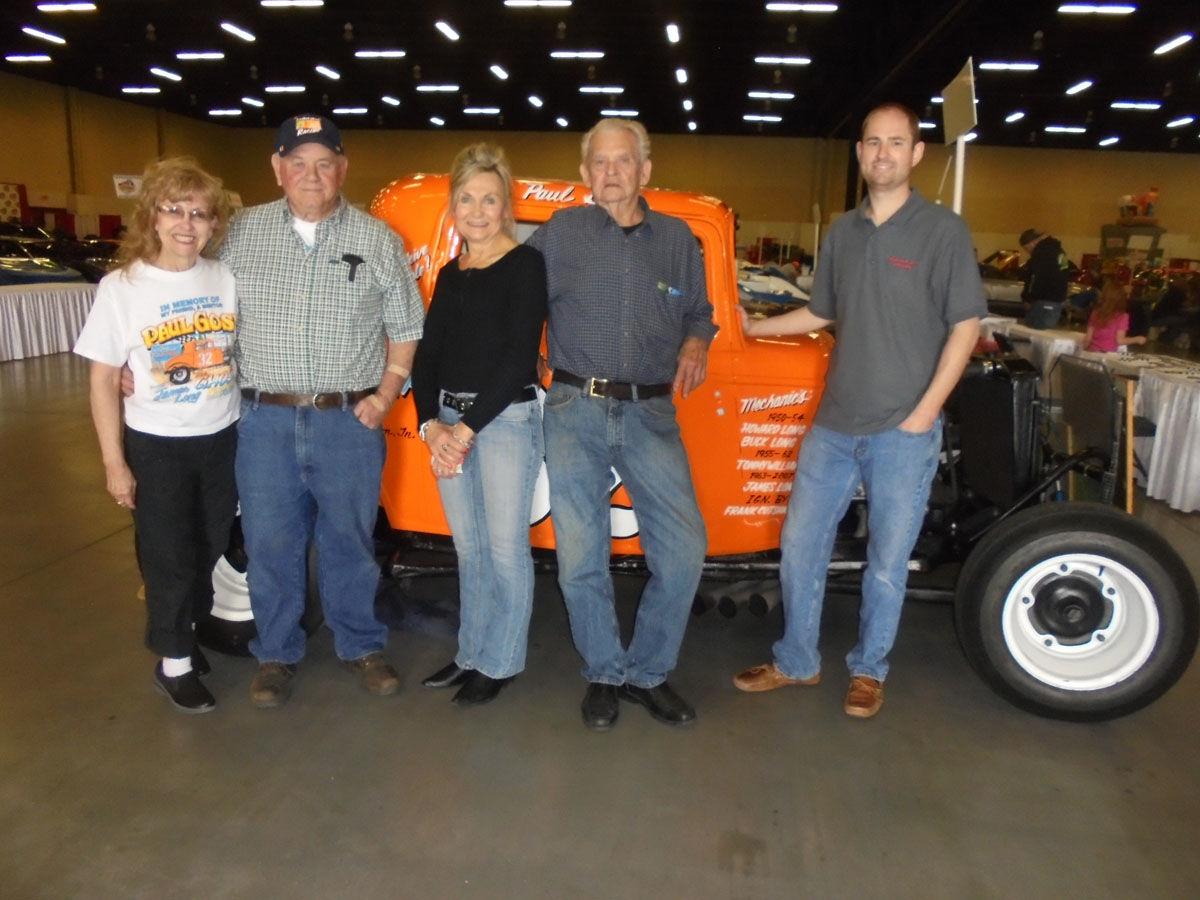 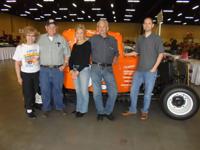 Glenda Gose Carpenter, James Long, Connie Gose Ivy, Tom Williams and Will Hayder in front of the Gose car that has won hundreds of races.

Glenda Gose Carpenter, James Long, Connie Gose Ivy, Tom Williams and Will Hayder in front of the Gose car that has won hundreds of races.

James Long carries on the tradition

On November 27, 1895, Frank Duryea crossed the finish line in America’s first automobile race in Chicago after covering 54 miles in 10 hours with a speed averaging 7.4 m.p.h. His competition had been two electric cars and three German Benz machines. That same year, the Benz company had produced 134 cars, while the Duryea brothers built 13 models a year later. In just over 20 years and just prior to World War I, automobile racing had become commonplace. Following the war and with the prohibition law, moonshiners were beginning to tweak their cars to outrun the law. With the repeal of prohibition, those moonshiners continued to try to outrun the lawmen who were after their untaxed liquor. Many expert drivers would come from that crowd of liquor runners.

With America’s entry into World War II, only a tiny handful of automobiles were built, while most able-bodied men, and a good number of women, were away in service, working in the defense industries or farming to feed the soldiers and civilians. By the end of the war, millions of service members came home eager to return to their normal lives. By 1946, automobile production had resumed, but was unable to supply the new demand. Older autos were bought in their stead.

Others joined with the moonshiners to exhibit their skills publicly and legally and restarted the sport of stockcar racing. For Claiborne County native and Morristown resident, Paul Gose (1925-1994), the timing was perfect. Bearing a striking resemblance then to the late actor Patrick Swayze, Gose had spent much service time in Great Britain roaring through the streets of London on a motorbike.

After returning home, he was determined to continue a challenging lifestyle and stockcar racing became his outlet. In that time $1,000 could easily build a competitive race car and Paul had the brains to tweak the best performance out of a car, as well as the natural skills to drive a winner. Needing a team to help build his cars and serve as his pit crew, Paul took on some helpers who became highly skilled at their own responsibilities. Above his garage was a small apartment where workers would often spend the night, with Paul’s wife, Louise, sometimes providing them with meals.

Having his Morristown home as his headquarters, weekdays were spent at his garage preparing for the coming weekend race. The close and loyal team paid off and Paul became one of the most successful and most well-known drivers in the entire region. A man with exceptional upper body strength, Paul took the time to work out by lifting weights and performing feats of strength.

Paul’s biggest joy was his three daughters, Glenda, Angie and Connie. The young girls grew up playing outdoors around the men working on their dad’s cars, and who also worked on spoiling the little girls. Even today, those workers and the girls make up an extended and loving family.

The Food City grocery store chain recently sponsored an extravagant race week to welcome the 2019 racing season and Paul Gose’s ’32 Ford racer was invited as a pioneer car which had been a big part in the development of modern racing. That was a call for the present Gose family and extended members to come together for the event. The call was answered on a Friday morning when sisters Glenda Gose Carpenter and Connie Gose Ivy met at car builder Neal Beck’s garage, along with Gose grandson Charlie Carpenter, and Tom Williams, Will Hayder, and James Long, who had brought the legendary race car.

Arriving at Sevierville, “The Ghost” was placed in the front of many very expensive modern race cars where James was welcomed by two Food City coordinators. On his regular job, David Morelock manages the Russellville Food City store, and 84-year-old Emerson Breeden has been with the company for 66 years. The next day, the car was displayed at the huge Bristol International Speedway.

James Long had cut his race car teeth working for Paul and has carefully restored Paul’s famous #32 1932 Ford. Born in 1946, James was a student at Morristown High School when he crossed the road after school to head to Paul’s shop to begin learning skills that would make him one of the most prominent auto restorers in the region. Then living on Buffalo Trail, James spent many nights in the over-the-garage apartment.

“My dad bored the first engine in this car,” James remembers. “I started helping Paul in 1963 and was around him a lot. From that time on, I pretty well turned all the bolts on his cars. Paul got this car in Greeneville from Bush Holly, a motorcycle cop who had a motorcycle shop. Paul gave him $50 for the car and it had a glove box where birds had built a nest. Paul paid Bush for the car and told him he’d come back for it after the birds hatched. That’s how Paul was.

“While I was working with Paul, his daughters Connie and Angie would be playing badmitton and would knock a shuttlecock on top of the garage that I’d have to go up and get it. We raced this car together from 1963 until 1966 and finished every race from first to third place. In 1968 we built a ’37 Ford and ran it until 1971. I’ve had a lot of fun and have eaten a lot of pork and beans.

“I’ve been fooling with race cars all along and started building engines and have been restoring cars and street rods for 44 years. We’ve won a lot of awards and been on magazine covers with some of those cars. Ronnie Shropshire helped me for a long time and I’ve known Will Hayter since he was born. He can do anything. Paul gave me this ’32 Ford and told me: ‘It’s your car and you know how to put everything together right.’ I’ve been told that the car draws as big a crowd as any car does. People enjoy seeing it.”

“Paul about raised me up,” Williams said. “From the time I was 15 he taught me everything I knew. He could tell whether you’d work or wouldn’t work. He liked me because I’d have his car ready to race when it came race time. When his daughter Glenda was little, I’d carry her over to the Sinclair Station to get her some ice cream, and I remember when he took Louise to the hospital and Connie was born. I lived over his garage and Louise would fix me something to eat or I’d go to Portrum’s Cleaners and Diner and get a fried bologna sandwich. Paul and Toodle Estes were the two best racers I’ve ever seen. Paul would send me to North or South Carolina, or Georgia, to help him.”

Twenty-seven-year-old Will Hayder has joined the Gose lineage by working for many years with James.

“I’ve known James ever since I was born,” he said. “My dad was in to hot rods and I started helping James when I was a freshman In high school. He’s had me do a little of everything from painting to body work. The final assembly phase is the most rewarding. James may have flown under the radar as a car restorer, but as far as quality is concerned, there’s none better.”