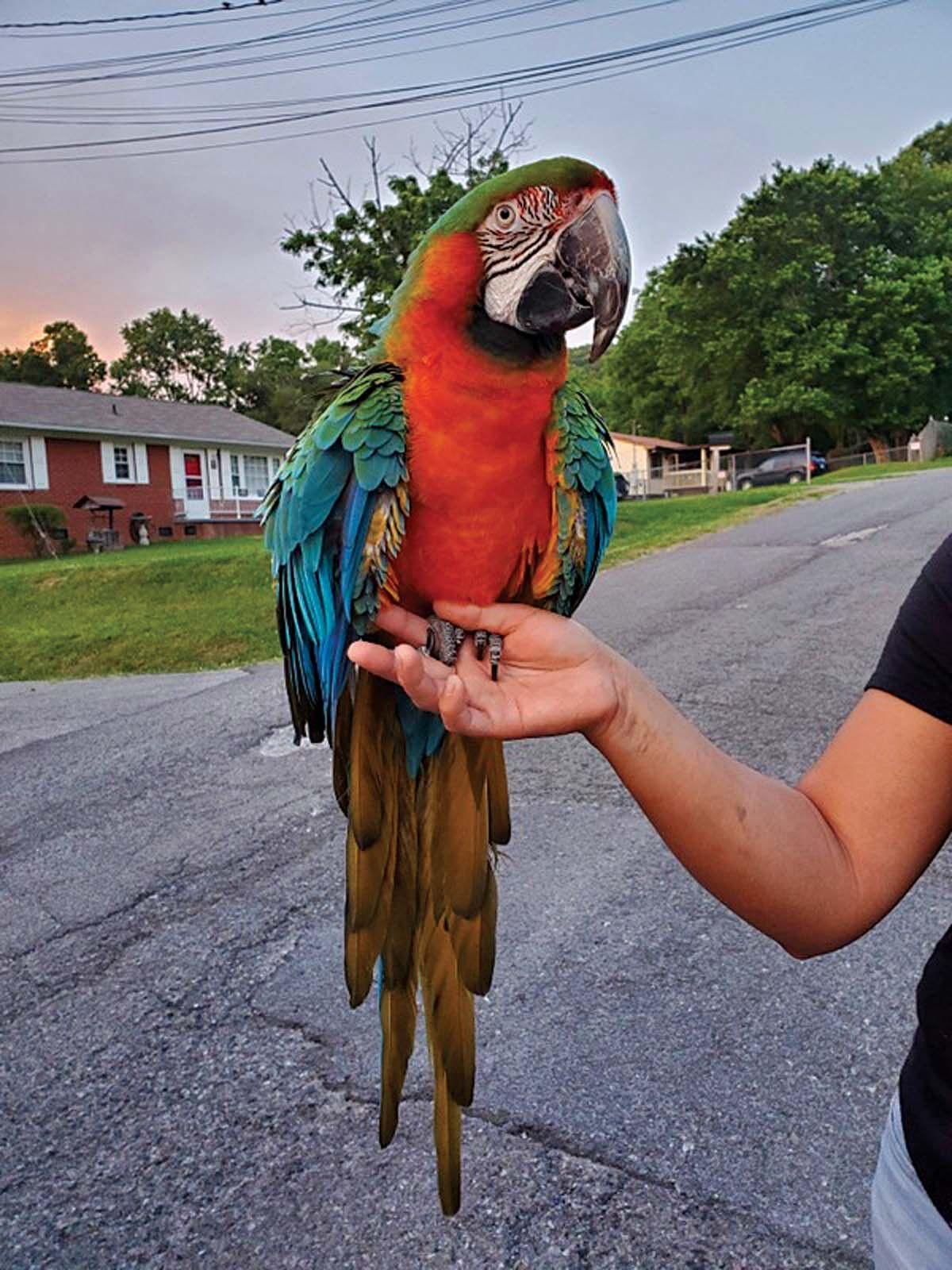 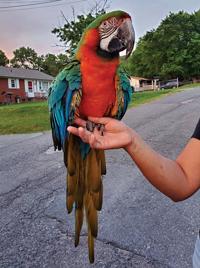 Harley the macaw is reunited with her owner after being rescued by the Morristown Fire Department. 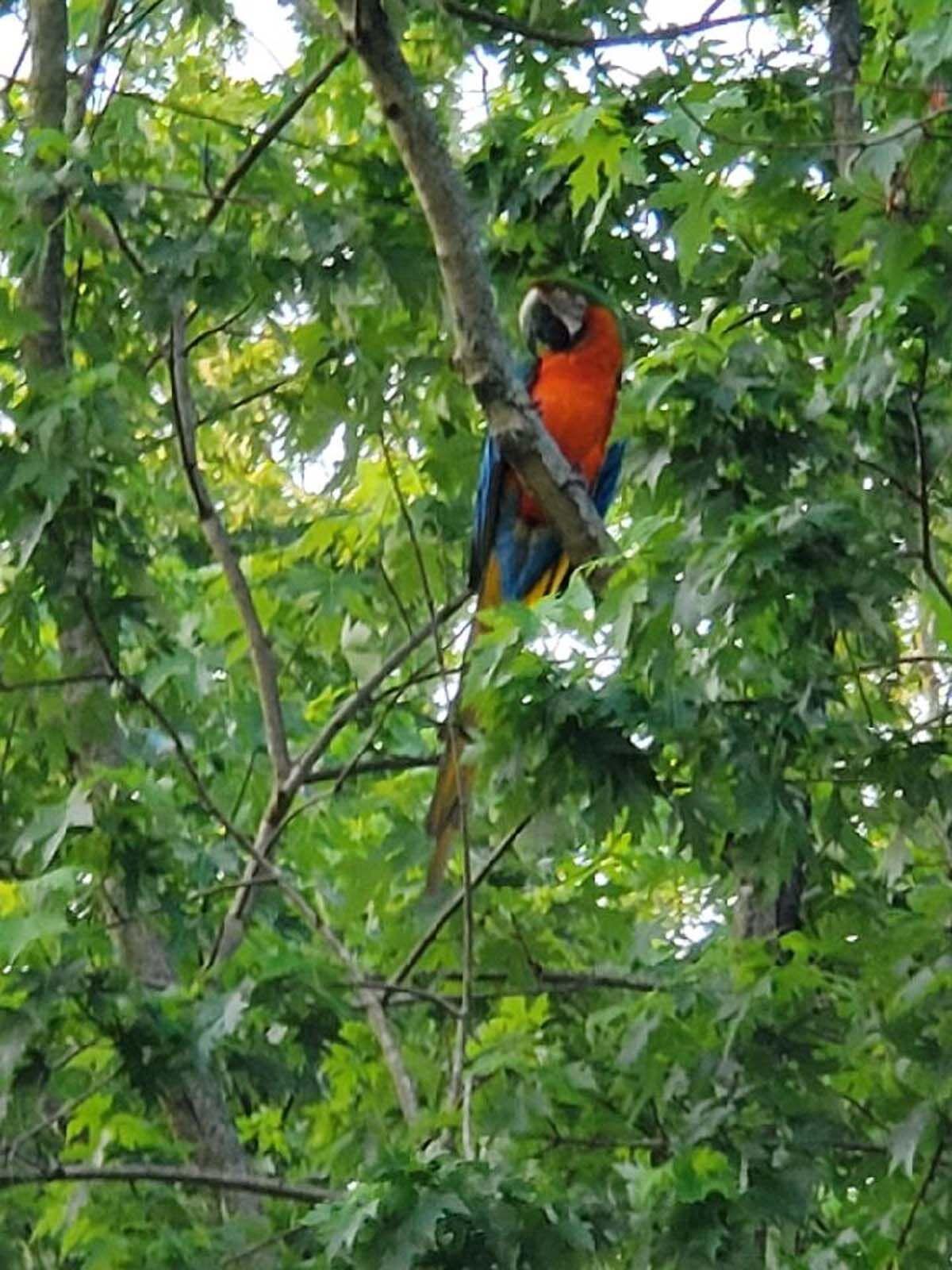 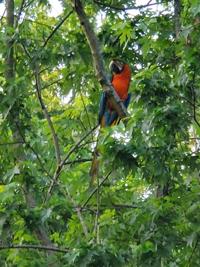 Harley the macaw was trapped 40 feet up in a giant tree on Morris Avenue. He was rescued by a member of the Morristown Fire Department.

Harley the macaw is reunited with her owner after being rescued by the Morristown Fire Department.

Harley the macaw was trapped 40 feet up in a giant tree on Morris Avenue. He was rescued by a member of the Morristown Fire Department.

Morristown Fire Department Lt. Greg Williams has been called to do a lot of things in his career. In fact, he says, often when people run out of options and they can’t figure out what else to do, they call the fire department.

That’s how Williams, engineer Donald Smith and firefighter Ben Lowe found themselves under a giant tree on Morris Avenue trying to coax a frightened, agitated macaw down from a 40-foot perch.

“We got a call to see if we could come and rescue a bird,” Williams said. “We don’t know much about birds, but when they can’t find anyone else to call they call the fire department.”

The issue began when Sylvia Tharp came home from work. Most days, she can hear the parrot – which belongs to a neighbor the next street over – outside in the backyard squawking and talking. Harley doesn’t live in a cage and is outside as much as possible weather permitting.

So it didn’t really register that something was different even when she heard the bird repeating Mama, over and over again.

It wasn’t until Tharp let her own pets out that she realized something was wrong.

“When the dogs went out, he started screaming,” Tharp said. “I looked up and I saw him, 40-foot up in the tree.”

Tharp got Harley’s family and they spent the next two hours trying to coax the bird, whose wings had been clipped to prevent extended flight down from the tree.

“We brought bananas out,” Tharp said. “We tried everything.”

Tharp called a friend with the fire department who called Williams, Smith and Lowe to come help.

It was Lowe’ job to go up the ladder and try to lure Harley down.

The problem is like the Norwegian Blue, Macaws may have beautiful plumage, but they also have a serious bite. Under normal circumstances Harley might not have nipped at the firefighter, but frightened he has the ability to cut deep enough to cause stitches.

“We had my firefighter go out. He put on his firefighter gloves and then he climbed up the ladder and stuck his arm out,” Williams said. “The bird was a little spooked and moved away from him.”

Harley nipped at Lowe a couple of times and the firefighter decided to take another tact.

“He was squawking. He never talked but you could tell he was spooked,” Williams said. “He kind of leaned towards Ben like he was gonna bite him. We decided to try and shake the tree to see if he would let loose.”

“When he got down on a lower limb, he let loose and flew back towards home,” Williams said.

“We’ve tried to rescue cats of course, this was the first bird for any of us,” Williams said. “They’re a beautiful bird. I’ve read a little on them since this happened. They can live to be 100 years old.

“It was interesting. I love those birds. They’re the most colorful birds. He was a little spooked, a little scared but he came down and got home, which was the ultimate goal.”