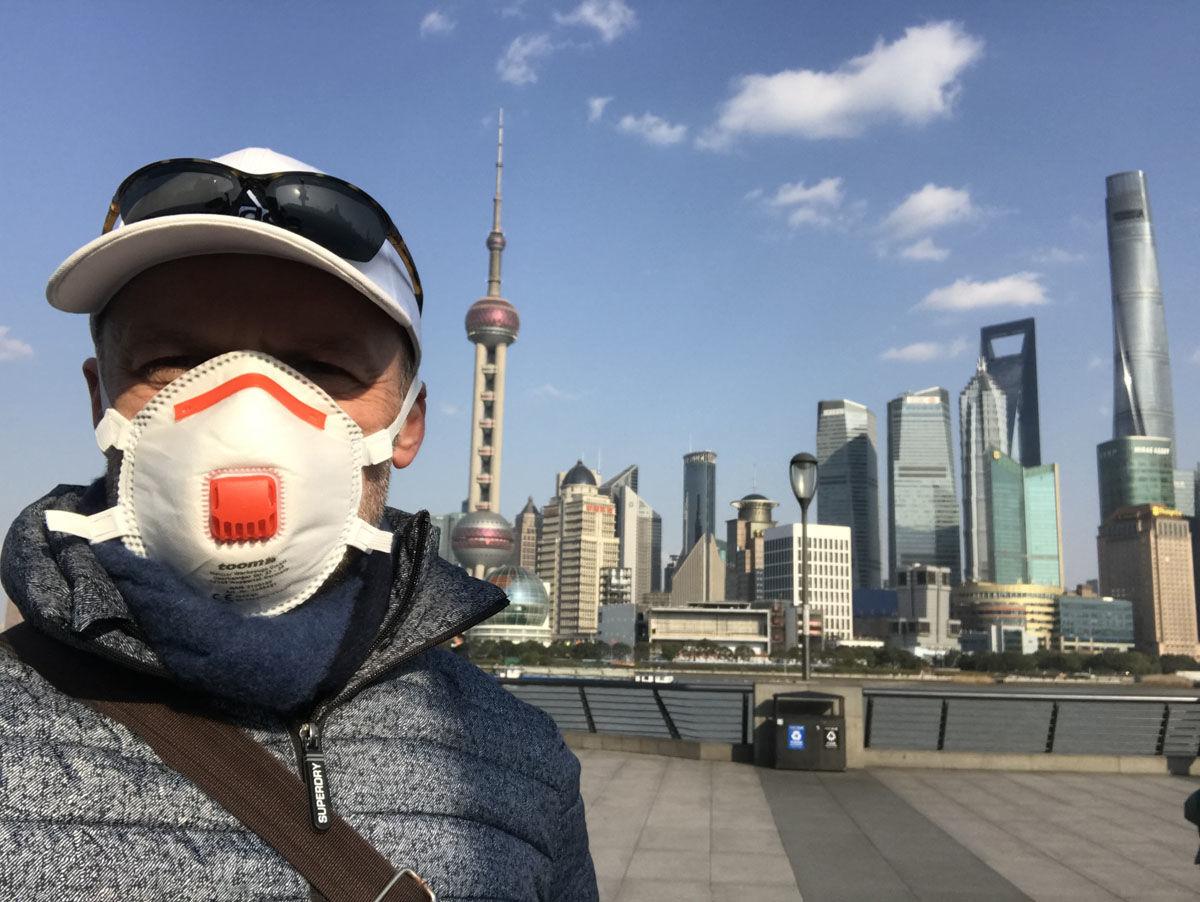 Frank Kohler, a former Morristown MAHLE executive who now works for the company in Shanghai, from the Bund with the new Shanghai Pudong District Skyline in the background. 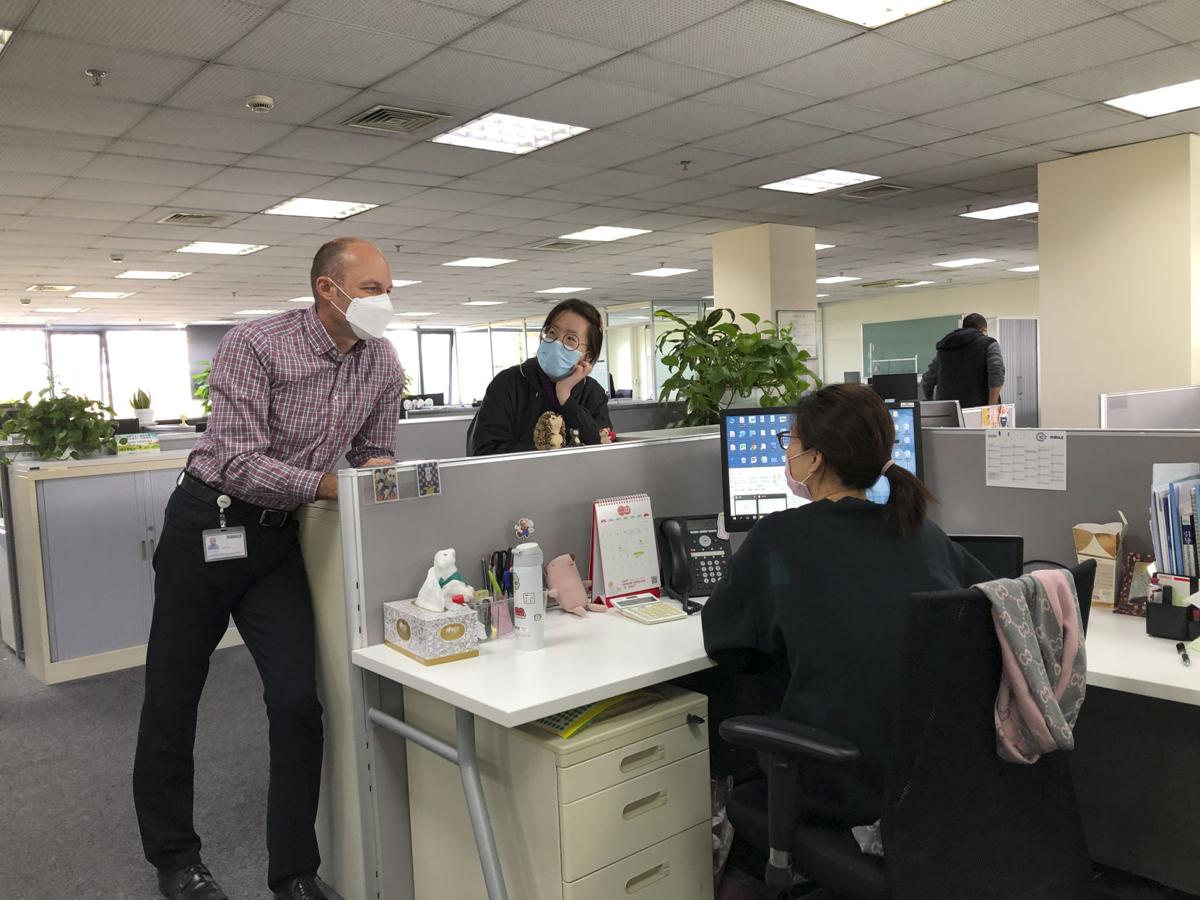 Kohler and his coworkers back in the office.

Frank Kohler, a former Morristown MAHLE executive who now works for the company in Shanghai, from the Bund with the new Shanghai Pudong District Skyline in the background.

Kohler and his coworkers back in the office.

It turns out Frank Kohler lives in one of the best places to ride out the coronavirus pandemic in the world – China.

Kohler, a human resources executive with MAHLE, lived with his wife and two sons for nine years in Morristown before moving to Shanghai, China in 2015 to serve as HR director over MAHLE’s 20 Chinese locations.

Shanghai is a massive, gleaming metropolis on China’s Pacific coast. The third largest city in the world, Kohler says it is “probably the most developed city in China.”

But more than that, it is a transportation hub with close economic ties to the Hubei Province and the city of Wuhan, the epicenter of the coronavirus outbreak. And while having close ties to the epicenter – roughly a 9-hour drive away – might seem like a negative, those close connections and shared history made a significant difference in how Shanghai managed and survived COVID-19.

According to the Nikkei Asian Review, Shanghai has dealt with similar situations, like SARS or H7N9, and put extensive procedures in place. Prior to even the identification of the virus, health officials in Shanghai were working closely with health workers in Wuhan, the Asian Review reported. They were prepared for what came next and as of Feb. 27, more than a month after the virus arrived in massive city of 25,000,000, Shanghai had 337 infections and three deaths, without a single case of unknown origin, according to the Asian Review.

“Without early preparedness, an outbreak could have been disastrous,” said Zhang Wenhong, head of the Shanghai Medical Treatment Expert Team and director of the Infectious Disease Department at prestigious Huashan Hospital, in an online article.

Zhang further attributed the city’s success to the “multipronged measures taken by the government and strong discipline shown by the people.”

But most of that work took place outside of Kohler’s knowledge. In fact, the first time he heard of the virus was a mid-January business trip to MAHLE’s birthplace, Stuttgart, Germany.

“Nobody could predict how it would develop,” he said. “On the way to the airport, I stopped at a hardware store and bought all available facemasks. Later that day, I heard that Wuhan would be on lockdown.”

Kohler somewhat nervously returned to life in China, their home in a subdivision close to a German school about 12 miles from the Bund, the historic part of downtown Shanghai. It’s there that Kohler and his wife Antje live with their youngest son, Veit. Their older son is at university in Europe.

In fact, as Chinese New Year’s arrived, the family looked forward to a vacation in the United States, where they could observe the virus outbreak from a distance.

“Most Chinese travelers, like us, were equipped with masks. We were surprised that the entry to the United States was still possible without any health checks,” he said. “It became clear the situation was getting more serious in China. Despite the holidays, we had conference calls with China management and headquarters in Stuttgart to discuss impacts and measures. The Chinese government then announced the extension of the week-long holiday by three days, and also ordered the factories and schools to close for another week.

“Looking back, that was maybe one of the key success factors to overcoming the crisis.”

Meanwhile the Kohlers, who hope to move back to Morristown when Frank’s assignment ends next year, extended their stay a week, finally deciding to split up. Antje and both boys went to Germany. Frank headed back to Shanghai, arriving Feb. 7.

“On the plane it became clear quickly, how serious the Chinese people were taking the situation. Most everyone was wearing a mask; some were even equipped with complete protective suits, goggles and gloves,” he said. “After landing all passengers were checked for body temperature and had to provide contact information and travel history.”

Kept company by the family dog, Max, a Hamblen County native and rescue dog that made the trip to Shanghai, Kohler returned to Chinese life, unsure of what to expect.

“The usually overcrowded streets were almost deserted. In the shopping center entrance and then at the entry to the grocery store, they had body temperature checks. The very few shoppers waited patiently until it was their turn,” he said. “I was relieved to see that there was no shortage in the supply – veggies, fruit, meat, eggs – all there. Only the Chinese ready-made noodles were sold out.

“Despite all the alarming news I have never sensed any panic. The government announced measures were accepted and implemented as necessary. Our Chinese friends were sharing how they cope with the situation, but I heard very little complaint about the restrictions of not being able to leave the house, the closed shops and restaurants and no public entertainment. Since the beginning of the crisis the police and private security has monitored the situation and behavior very strictly. They warn you if you don’t wear the mask properly and everyone who arrives in Shanghai needs to be in 14 days isolation.”

After a week of isolation, curiosity got the best of Kohler and he drove downtown, the usual hour long trip reduced to 20 minutes by lack of traffic.

“Where usually thousands of tourists and locals stroll along the boardwalk and enjoy the Pudong skyline, less than a hundred people enjoyed the sunshine,” he said.

After the mandated plant closure ended in the second week of February, Kohler returned to work under strict controls.

“It was a slow ramp-up. Both office areas and productions sites started with limited capacity and provided home office where possible in order to reduce the risk of infection to the colleagues. Many colleagues still had concerns about their health and we offered flexibility as much as possible,” he said. “Like most of my colleagues, I stayed in home office for the first week and only small teams in each department worked onsite.”

It was Feb. 24 before more than half of Kohler’s colleagues returned to the office.

“We had implemented strict hygiene measures which are still in place today, including hand sanitizer stations, regular disinfections of office areas, door handles, bathrooms and office equipment. We provide masks to everyone and it is mandated to wear a mask while at work,” he said. “(The heat is) turned off and we keep windows and doors open to allow for fresh air to circulate. On a cool day, we are wearing jackets to stay warm. In the cafeteria, everyone sits at a single table which is also thoroughly disinfected after each person. Formal meetings are not encouraged; still today we have more online conferences than personal meetings. Since two weeks we are now back with 100% attendance in the office and most plants operate at almost normal level.”

Kohler said originally the family considered the U.S. and Germany to be safer options but Veit came home to be with his father and closer to his school. Frank says they both have felt perfectly safe.

“Despite the growing number of infections, deaths and the restrictions, life seemed to continue in a different pace than before. The measures and restrictions are well organized, controlled, and with everyone patiently doing what is expected and ordered by the authorities,” Frank said. “I feel that there were big doubts about the situation in China, but it improved very quickly. We are now only eight weeks after the lockdown of Wuhan and we have seen a steady decline without new infections, other than visitors arriving from abroad.

“We feel that the daily life is almost back to normal – or maybe the ‘new’ normal – accepting masks and temperature controls as a standard we live with. On the way to work, I unfortunately experience traffic jams again as the companies have resumed normal working schedules. Most restaurants and shops are open again; also doctors and dentists are re-opened and treating patients. We are waiting for the schools to open, however, that could take another 4 or 5 weeks.

“Meanwhile there is also an app available that many businesses use as an access control. The app accesses the location information on your phone over the past 14 days. If you scan the code and the app confirms that you have been in safe areas for the entire time, it gives you a green arrow and you may enter.

“If you just arrived in Shanghai or visited any of the defined high risk areas, it shows that you have restrictions and you will be prohibited to enter.”

In a world turned upside down by pandemic, with the future uncertain, Kohler finds himself in a strange, bewildering place, a place that has nothing to do with geography.

“As the reports about the spreading of the virus and exploding numbers of infections and death in Europe and then in the U.S. emerged, I felt some disbelief and it is difficult to understand the slow reactions.

“Germany and the U.S. seem less prepared than expected and decisions to curtail the spreading take a long time. We hear that masks are sold out everywhere but that you hardly see anyone wearing them,” he said. “Now Veit and I worry about Antje and Lucas and our families in Germany and the friends and colleagues in the U.S. I feel for the people in Morristown and the U.S. who now, unfortunately, have to go through the same situation we have had in China.”