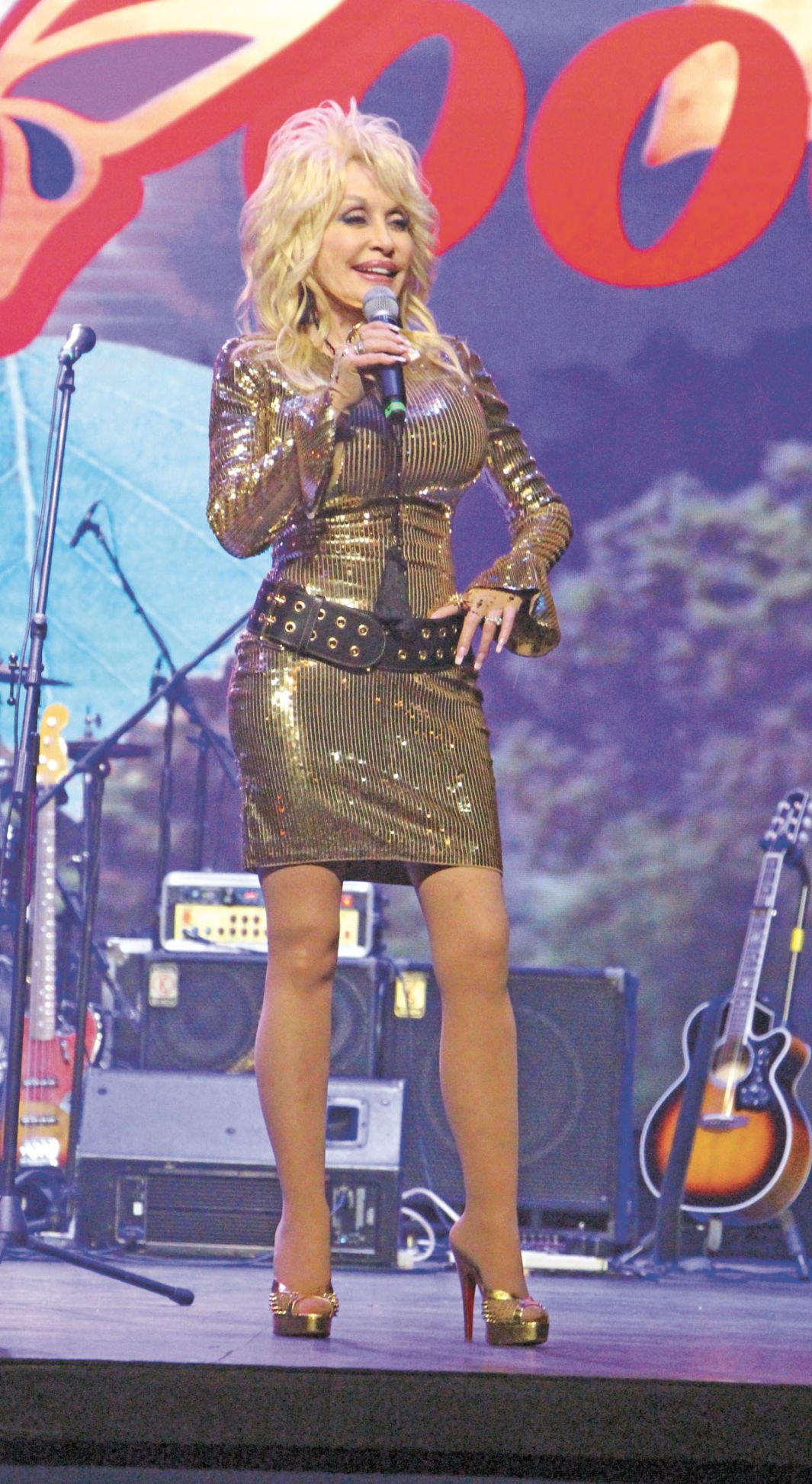 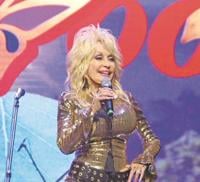 Dolly Parton entertains the crowd at Dollywood during one of her shows. Dolly donated $1 million to medical research to battle COVID-19 just a few weeks ago. 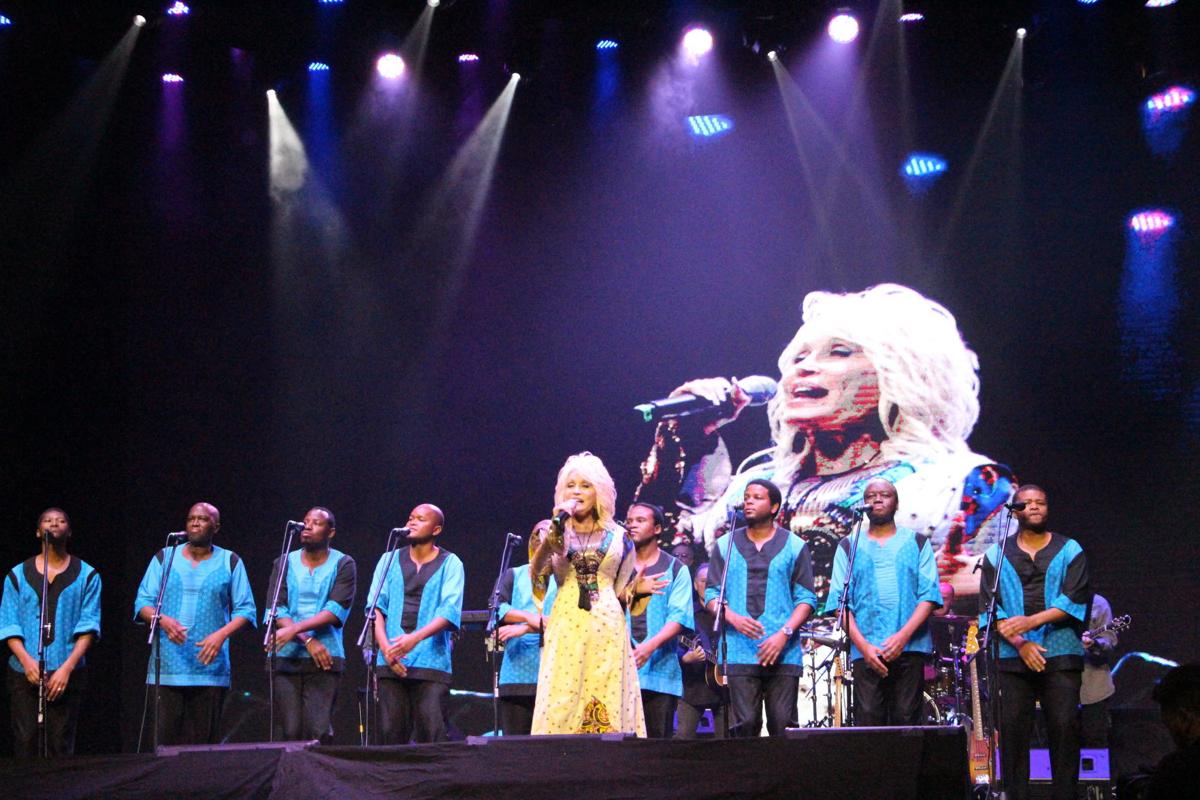 Dolly sings along with a choir at one of her shows at Dollywood. Dollywood is providing reusable face mask for patients, doctors and nurses at East Tennessee Children’s Hospital. 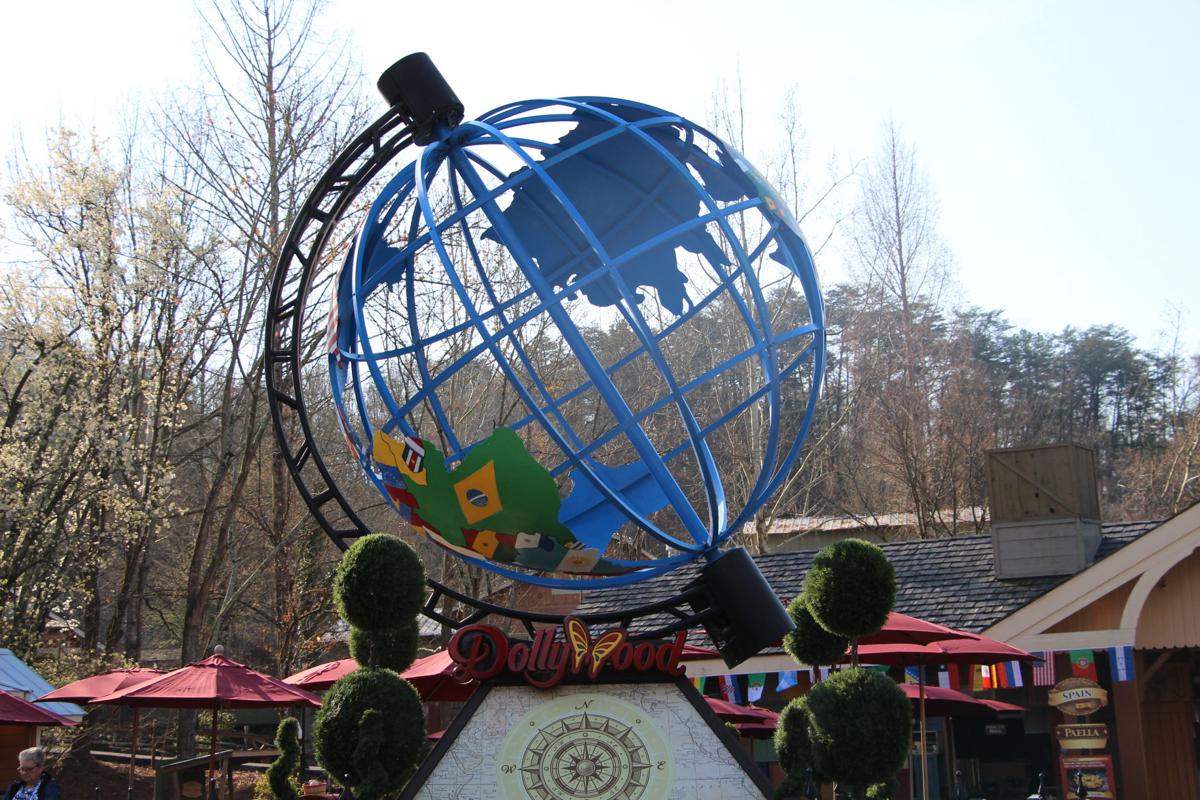 The globe in the front of Dollywood.

Dollywood has postponed their re-opening due to COVID-19. 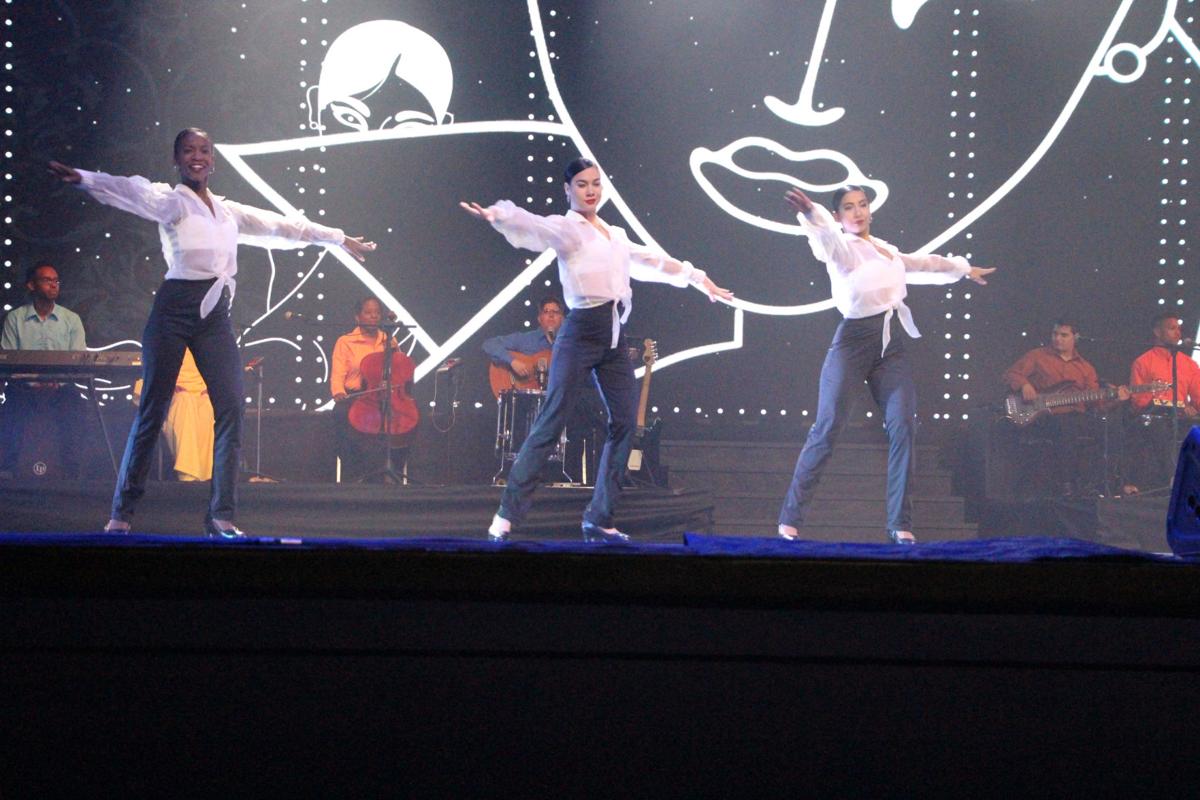 Dancers perform during a show at Dollywood.

Dolly Parton entertains the crowd at Dollywood during one of her shows. Dolly donated $1 million to medical research to battle COVID-19 just a few weeks ago.

Dolly sings along with a choir at one of her shows at Dollywood. Dollywood is providing reusable face mask for patients, doctors and nurses at East Tennessee Children’s Hospital.

The globe in the front of Dollywood.

Dollywood has postponed their re-opening due to COVID-19.

Dancers perform during a show at Dollywood.

The novel coronavirus has disrupted life in these United States – and around the world – but don’t tell Dolly Parton that.

Parton, the grand dame of country music and an icon of service and contributions in times of need, has proved her generosity and heartfelt concern for her fans runs far deeper than her dyed blonde wigs.

The namesake for the No. 1 attraction in the Sevier County tourism center of East Tennessee, Parton and company postponed the 2020 season opening for Dollywood with an eye for employee and visitor safety. That move also postponed the paychecks counted on by the hundreds of park employees.

To that end, the company has ensured those jobs will still be available to the employees when the park can open again after the virus threat has passed.

The guest performers who had traveled to East Tennessee for the annual Dollywood Festival of Nations all returned to their homelands in the days following the announced opening postponement.

Parton has a stellar reputation which goes far beyond her remarkable career in country music and Hollywood.

One example was her immediate response to lend aid and financial assistance to the Sevier County community following the devastating wildfires which swept through Gatlinburg, Pigeon Forge, Sevierville and beyond.

The lastest star in her crown is a $1 million donation to medical research in the battle against coronavirus.

The “9 to 5” singer, actress and philanthropist tweeted April 1 that she’s donating $1 million to Vanderbilt University Medical Center in Nashville for coronavirus research.

If that isn’t enough, add this: while the novel coronavirus pandemic forced Dollywood to postpone its season opening, hosts are finding new and creative ways to give back to the community that has supported the park for 35 years.

A few weeks ago, the park provided the Sevier County Food Ministries with a check for more than $16,000 to help shore up the non-profit’s supplies just as it began facing unprecedented demand. Now, two of Dollywood’s hard-working teams have found additional ways to provide crucial items to two important groups.

Last week, Dollywood’s wardrobe and costume shop teams began producing reusable face masks to give to patients, nurses and doctors at East Tennessee Children’s Hospital. In one day, the wardrobe team produced 350 masks, while the costume shop team created 250 adult masks and 250 children’s masks over the course of two days. Members of both teams have asked to continue making the masks from home, so company officials will provide supplies currently on hand to allow the teams to produce additional masks.

“We are blessed to have talented hosts working in our wardrobe and costume shops,” explained Eugene Naughton, vice president of Dollywood Park Operations. “East Tennessee Children’s Hospital reached out to us to see if we could help, and as soon as we received the call, our teams started working. We knew this was the right thing to do, and our hosts have done an amazing job producing these masks. We’re just glad to do our part.”

Also last week, Dollywood’s safety team provided 200 ponchos to the Sevier County Emergency Management Agency, Pigeon Forge Fire Department and the Sevier County Ambulance Service. Due to the ongoing medical supply shortage, the groups are in dire need of gowns that typically are used to protect first responders from bodily fluids that may be present in scenes where they are needed to perform live-saving measures. When hearing of the need, the park’s safety and merchandise teams knew the stock of Dollywood souvenir ponchos on hand could be used to meet the need.

“When we heard they were in need of this vital personal protective equipment, we knew we had to find a way to assist,” Naughton explained. “These folks are on the front lines every day and we have to do all we can to keep them safe. We have a close working relationship with these groups—in fact, a number of our EMTs on staff also work for these local agencies—so we’re honored to be able to help them in this way.”

Not satisfied with financial contributions to the fight, Parton is mindful of some of the youngest who are quarantined from family and friends at school.

Dollywood and Abramorama, in association with The Dollywood Foundation, announced Parton will read select children’s books from her Imagination Library at 7 p.m. each Thursday evening. For 10 weeks, “Goodnight With Dolly” will feature Parton reading books that have been specifically chosen for their appropriate content at this unique time.

During each week’s “Goodnight With Dolly,” the entertainment icon—who is better known as The Book Lady to millions of children around the world—welcomes viewers and introduces the title, author and illustrator of the featured book. Snuggled in bed with her Imagination Library book, Parton will read each story in her own signature style.

The books featured in the series include: “There’s a Hole in the Log on the Bottom of the Lake” by Loren Long; “Llama Llama Red Pajama” by Anna Dewdney; “I Am a Rainbow” by Parton; “Pass It On” by Sophy Henn; “Stand Tall, Molly Lou Mellon” by Patty Lovell; “Violet the Pilot” by Steve Breen; “Max & The Tag-Along Moon” by Floyd Cooper; “Last Stop on Market Street” by Matt de la Peña; “Coat of Many Colors” by Parton; and her favorite book, “The Little Engine That Could” by Watty Piper.

The stories will be read across the social channels for the Imagination Library, Dolly Parton’s personal sites, the World Choice Investments family of attractions, and The Dollywood Company. The readings will be Dolly’s personal gift to all families. Her hope is that families will be inspired by her message to pass on love and keep hope alive as we all work together during this time.

“This is something I have been wanting to do for quite a while, but the timing never felt quite right,” she explained. “I think it is pretty clear that now is the time to share a story and to share some love. It is an honor for me to share the incredible talent of these authors and illustrators. They make us smile, they make us laugh and they make us think.”

Regarding the film’s release, she adds, “Although it was the right thing to do, postponing the screening of our documentary was a disappointment. So many of our Imagination Library affiliates had organized events around the nationwide screenings; however, things do have a way of working out, so the documentary will still have its day.”

The Library that Dolly Built, directed and produced by Nick Geidner, UT journalism professor and director of Land Grant Films, and narrated by Danica McKellar, goes behind-the-scenes of the literacy-focused non-profit, Imagination Library, to show how one of the most famous and beloved performers in the world has developed an efficient and effective program for spreading the love of reading. Dolly Parton’s Imagination Library started as a gift for the children in Dolly’s hometown, Sevierville, and is now active in all 50 states and five countries. The film also provides a glimpse of the profound impact the Imagination Library has on the people through original interviews with authors, policymakers, Imagination Library staff, recipients, and the legend herself, Dolly Parton. Woven throughout the film is a biographical sketch of Dolly Parton, featuring rare photos and films from her childhood. Unlike most biographies of Dolly, it doesn’t focus on her music. Instead, it demonstrates that at every point in her career, any time she has had success, Dolly Parton has come back to Sevierville to give back to her people.

Gatlinburg – Anakeesta’s TreeVenture is the newest way to explore the Smoky Mountains in downtown Gatlinburg. The unique treehouse adventure c…