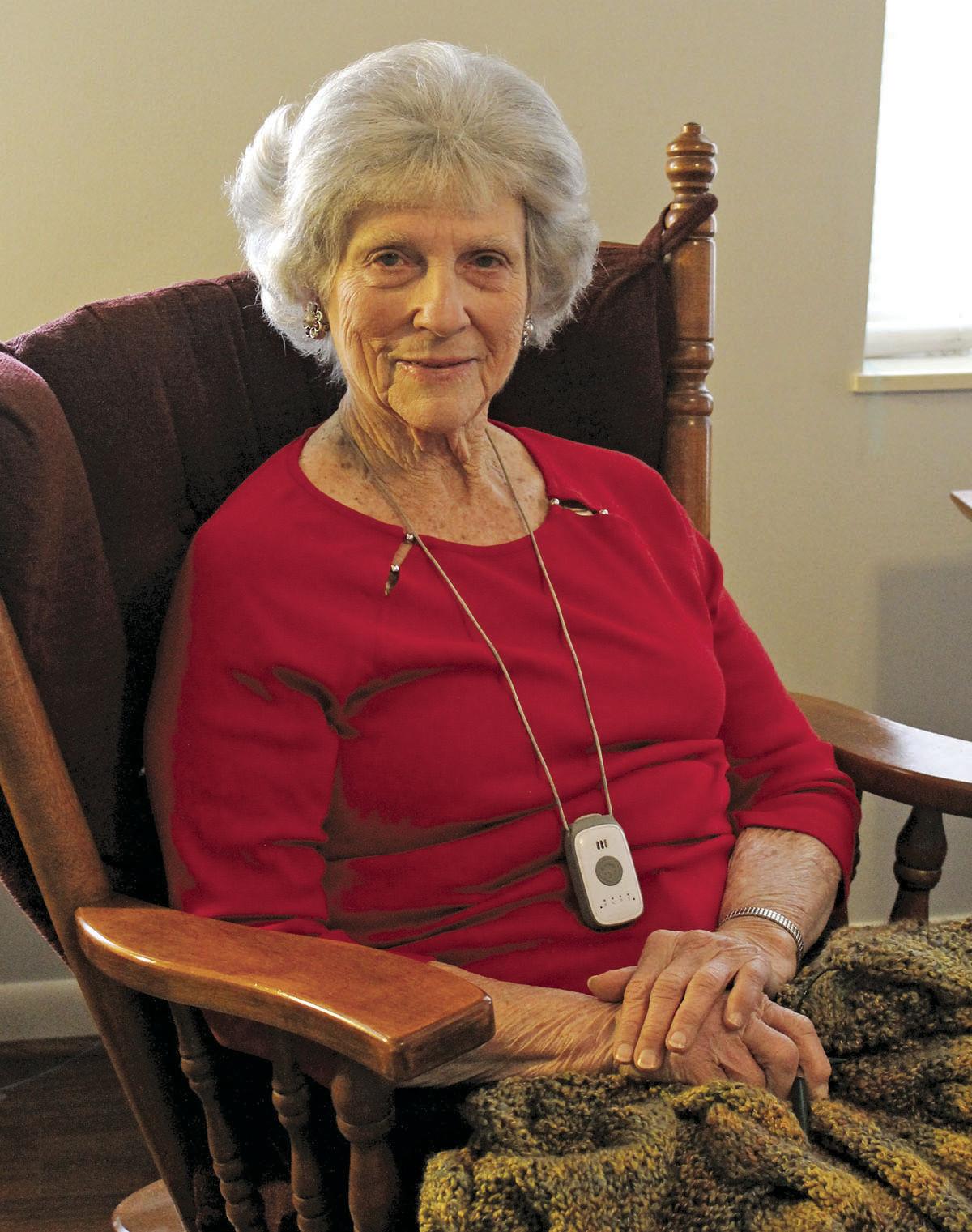 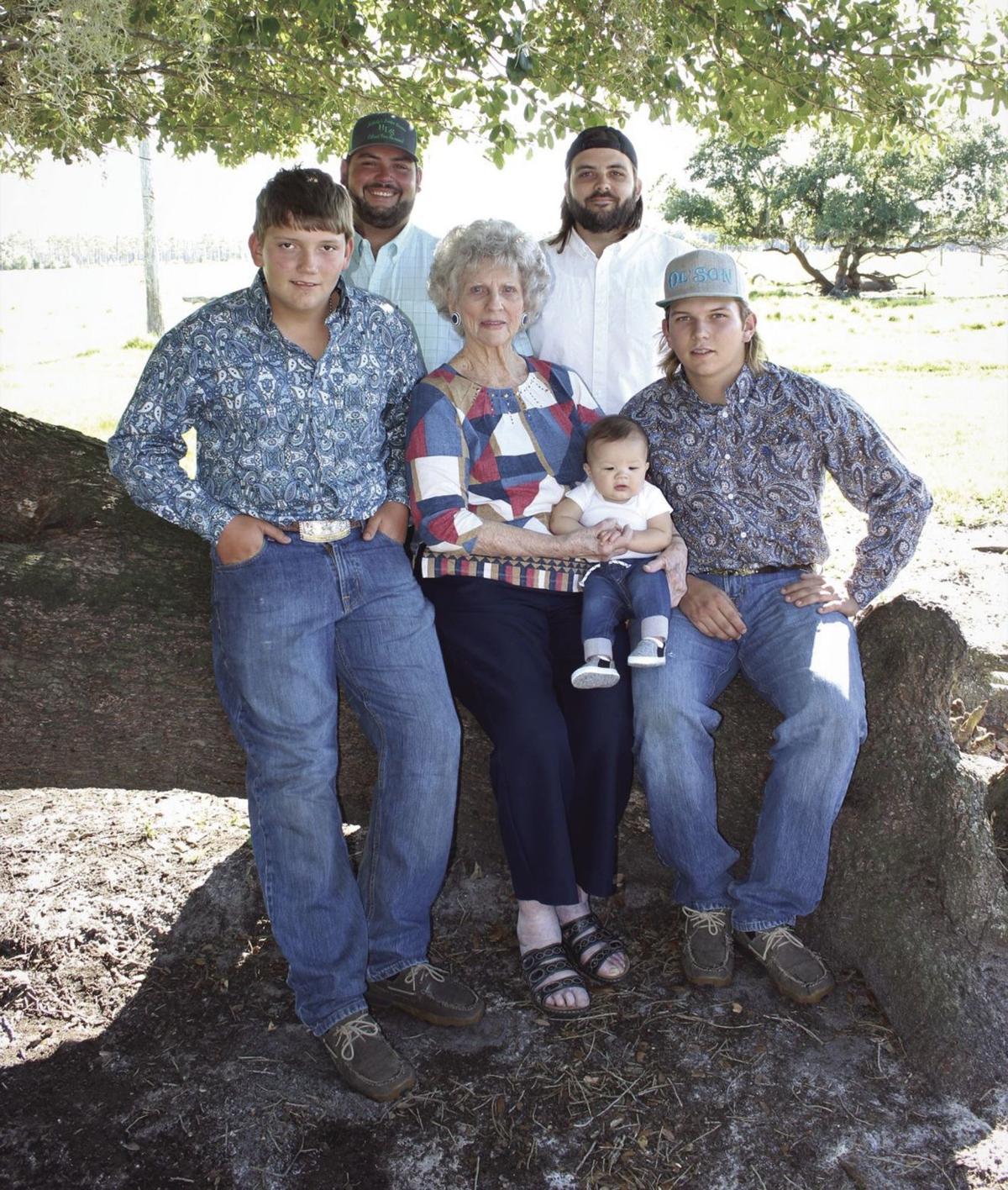 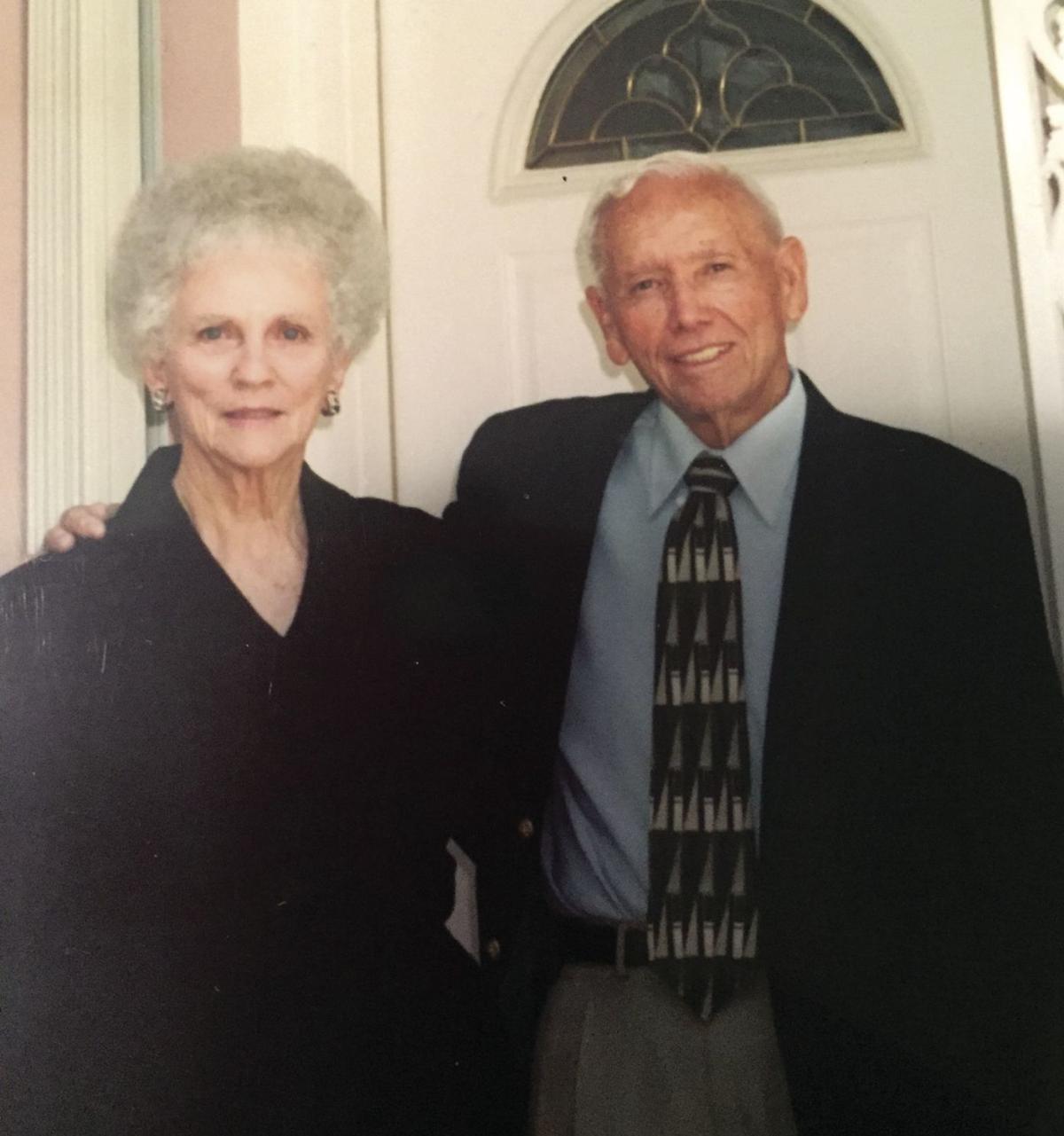 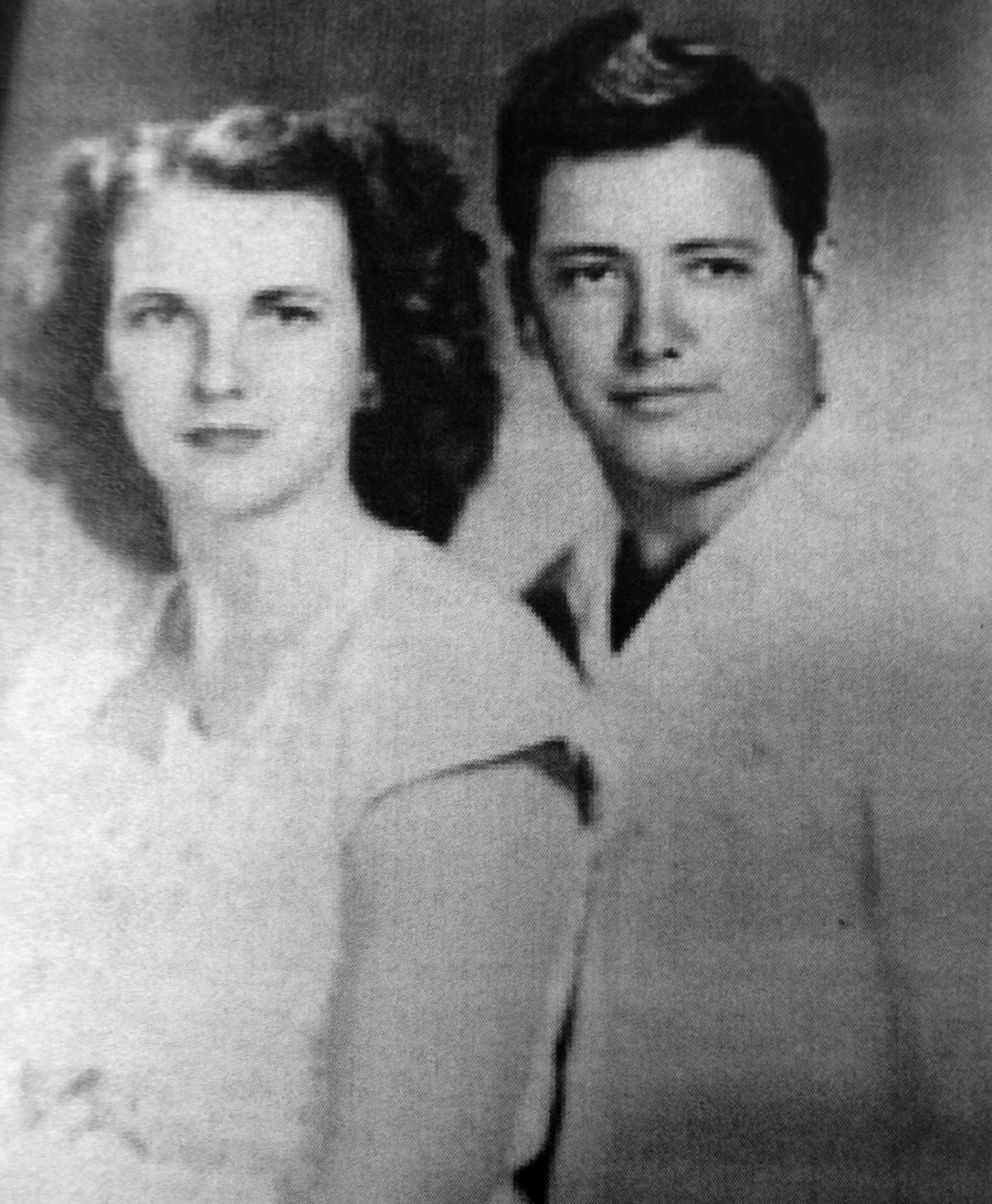 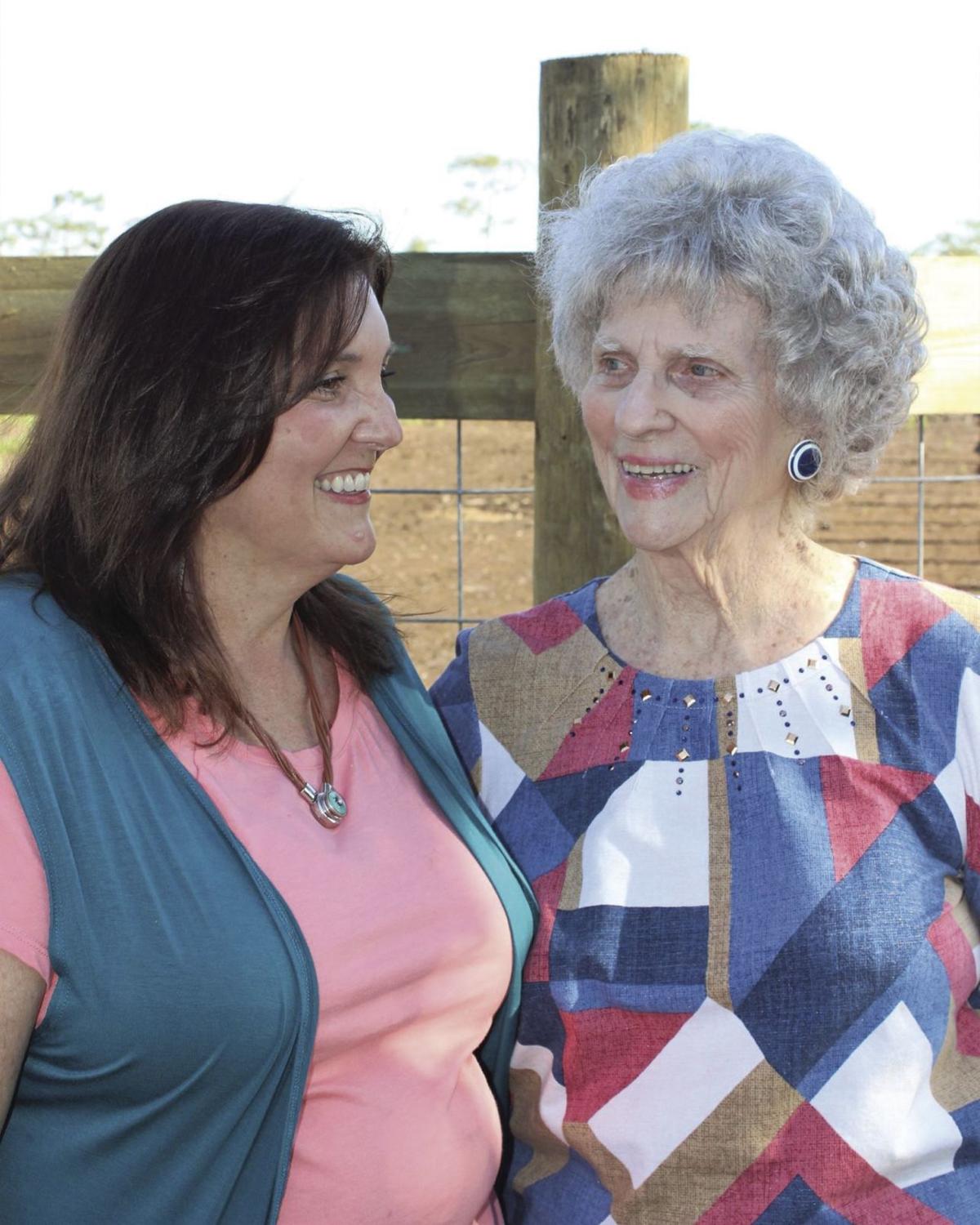 Gloria Allen of Talbott is a great example of a fully-lived life. She is still adding to her resume at 93 years of age.

Allen has been a mother, a wife, an accountant, a vice president, a comptroller and so much more.

She was born in Labelle, Florida, located 35 miles from Fort Myers.

“It’s an agricultural area with cattle, citrus and timber,” she said. I’m a Florida ‘cracker.’”

She had five sisters growing up. Allen’s mother died when she was eight years old. Her father stepped in to raise the six siblings.

She married James Allen and they raised a family. They were married 59 years, but James passed away two days after their anniversary at age 73.

For 39 years, Allen worked as an accountant at Alico Land Development in Labelle before retiring.

“The company I worked for, Alico Land Development, was started as a spin-off of the Atlantic Coast Line Railroad. They spun off these lands the railroad owned in Florida to develop those lands,” Allen said. “We planted citrus groves, sugarcane and replanted timber and a big ranch. It started out as an over the counter stock company.

“I started out as a payroll clerk and retired as vice president and comptroller,” she said.

After Allen retired from Alico, the next five years were busy ones as well as she was a substitute teacher, had a catering business she ran in the evenings and operated a tax business.

“I had three kids in college at that time,” Allen said. “I had to do lot of things.”

After five years, the Allen’s had bought a place in the mountains of North Carolina, splitting living time equally each year in North Carolina and Florida. The decision was made to move to North Carolina full time.

“We were tired of going back and forth, so we sold the Florida house,” she said.

After moving to North Carolina, she wanted a new challenge.

“You think when you move to a new place, you’d have a lot to do, but after a few months, you start looking for something more to do,” Allen said.

That’s when she saw an advertisement from H&R Block for tax preparers.

“I had my own tax business, but you had to take their course,” Allen said. “I worked for them six weeks out of the year when they were really busy. In doing that, a fellow there with Banco Lumber found out (about her experience) and asked if I was interested in full-time work.”

Allen worked for the next 20 years when she retired again at 90.

“It was working at my own pace,” she said.

The owner of the company died after she had been employed there for 10 years.

“I pretty much ran that place for 10 years,” Allen said.

Allen has been very active in church over the years. Since she moved to Talbott in 2016, she has attended Lakeshore Baptist Church.

“I’ve taught every age group in Sunday school, been Sunday school superintendent and different things,” she said. “In our church, like many churches, attendance has been down. I’m usually there for whatever is going on. We have a lot of different organizations. It’s a big building, but a small number. We have a missions group, and we fix meals every quarter for the Samaritan’s House. We do something with Walters State twice a year that we furnish food. Whatever is going on, I’m out there to take part in it.”

Allen’s daughter, Cheryl Gray, is registrar at Carson-Newman University. Cheryl convinced her mother to relocate from North Carolina to Talbott.

“She is the reason why I’m in this area,” Allen said. “I never planned to move once I moved to the mountains, but there it was 13 miles to town. As I got older, my children didn’t like the fact that it was so far to a doctor and so far away. They decided that I needed to move closer to one of them. Cheryl and Don convinced me this was the place to move.”

During Thanksgiving 2016, all of the children stayed over, rented a truck and moved her to Talbott.

“I love it over here, it’s very nice,” she said. “Here, you don’t know that there is a main highway out there a little ways away. It’s very quiet. I’m close to everything. You go four or five miles in any direction, I can get anything I want.”

Allen still volunteers in the office of Appalachian Outreach in Jefferson City one day a week.

“We have people who come to Appalachian Outreach through the week to get food, clothing on Monday, Tuesday and Thursday,” she said. “In their thrift store, they sell nice things for a very nominal price.”

“I’ve always loved to cook and that’s why I had the catering business,” she said. “I couldn’t have catered without my husband. He retired before I did. He did the grunt work, lifting and carrying and the shopping. It was a great thing and I enjoyed it. I like people.”

“When I moved here, a young man who lives across the street from me had moved his parents in with him,” she said. “The mother died and it left the man, who is 50 and his father, who is 88. When I bake, they’re my protégés, I make sure they get something. I’m sort of like their next door neighbor.”

The man also returns the favor by taking her garbage and other chores.

“He repays me in full and that’s very nice,” Allen said.

As a caterer, she once made a wedding cake for 500 people.

“That cake had ridges and waterfalls,” she said. “That was fun. When I was still working for Alico, I could only cater on the weekends. The five years after I retired from Alico and moved to the mountains, I stayed as busy as I wanted. We advertised by word of mouth.”

Among the activities Gloria enjoys are knitting and crocheting.

“I’m not much of a TV person,” she said. “I turn it on every now and then to check out the weather. My son gave me a new smartphone for Christmas, so I get the weather on there. I just haven’t learned how to operate the phone yet.”

One of her daughters, who is a nurse, insisted that Gloria get a medical call device to wear in case she would need help. She called several vendors from adervisements in AARP Magazine.

“It works, but I’ve not had to use it. I test it once a month,” she said. “No matter where I am, I push the button and someone on the other end says ‘Gloria, are you all right?’ then they tell me to give them my address. I think I need to write these people and ask for a commission. It gives you a sense of security.”

The family celebrates together at Thanksgiving. Allen said that families need a tie, even one day a year.

“Once your children start having kids, it’s hard to go away at Christmas when you don’t live in the same town,” Allen said. “So we decided that we’d get together on Thanksgiving, all come as many as they can. In the mountains, I had a much bigger house. When they come, we eat at Cheryl and Don’s house, then we come here. She will do the turkey and side dishes and I’ll do the desserts. That works out fine.”

Gloria goes to Florida for three months to spend time with her daughter Lucy and her family.

“I started out when I moved here that I was going to spend six months in Tennessee and six months in Florida. I don’t like hot weather. I go there for spring break in March. We have a girl week when my daughters all gather with me there. I stay there until after graduation. I’ll have a grandson graduating there in May and another graduating in North Carolina in June this year. I have to get back for that. Last year, I went for two and a half months and that worked out well.”

Allen has four biological children and three children from her late sister, who think of Gloria as their mother.

One of Gloria’s sisters passed away in the early years of Gloria’s marriage, leaving three children behind. Gloria stepped in and raised those children like they were her own.

Michael, 72, the oldest son is a West Point graduate and retired as a lieutenant colonel. He lives in New Jersey and Florida.

“From a very small town, he won his nomination competing against 12 others,” Allen said.

Pat, is a retired school teacher and lives in Forest City, North Carolina. Daughter Lucy, 55, is a teacher of special needs children in Florida. Allen’s other biological son who served in the U.S. Navy, is deceased.

Nieces Cheryl and Linda came to live with Gloria at eight years of age. Their brother passed away several years ago.