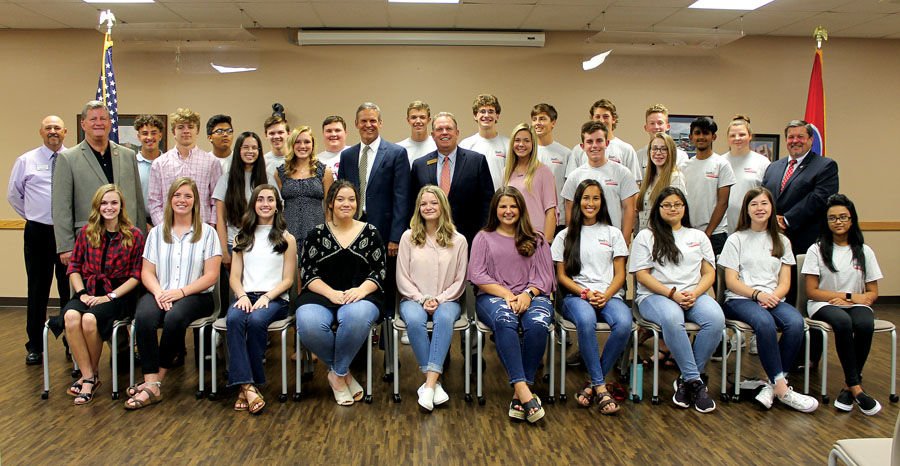 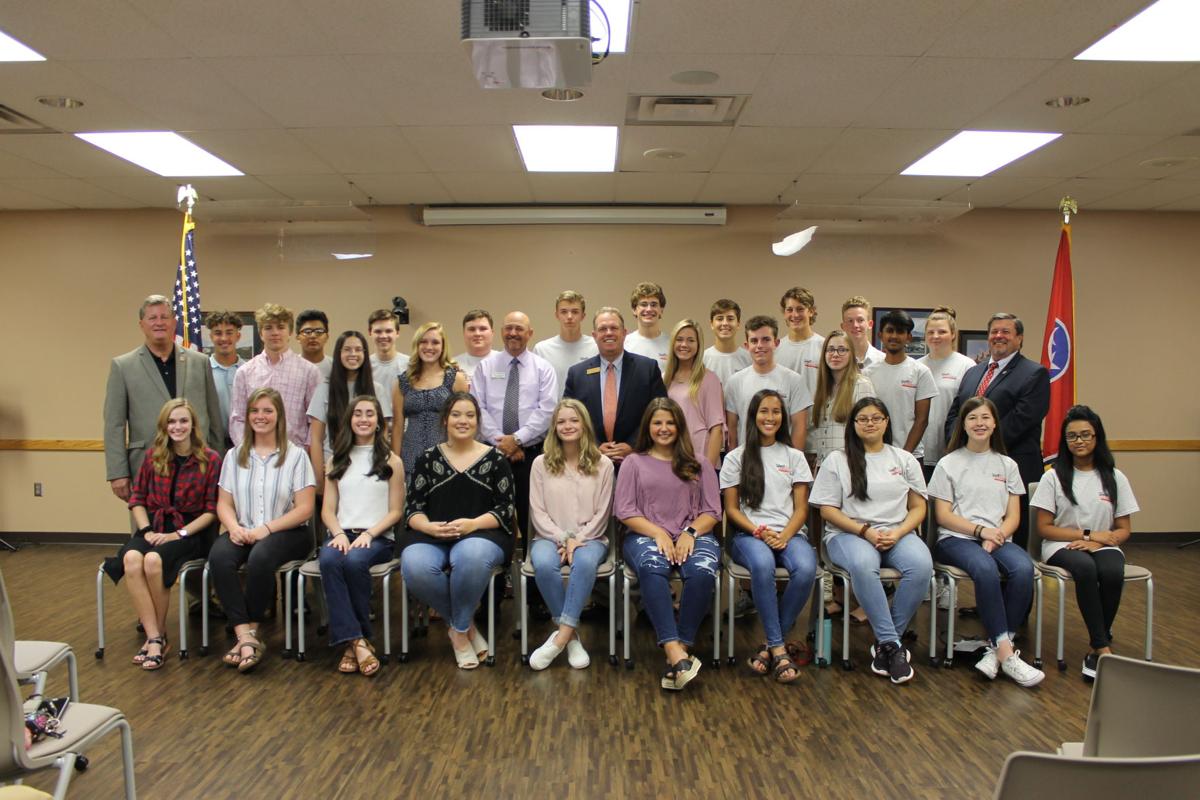 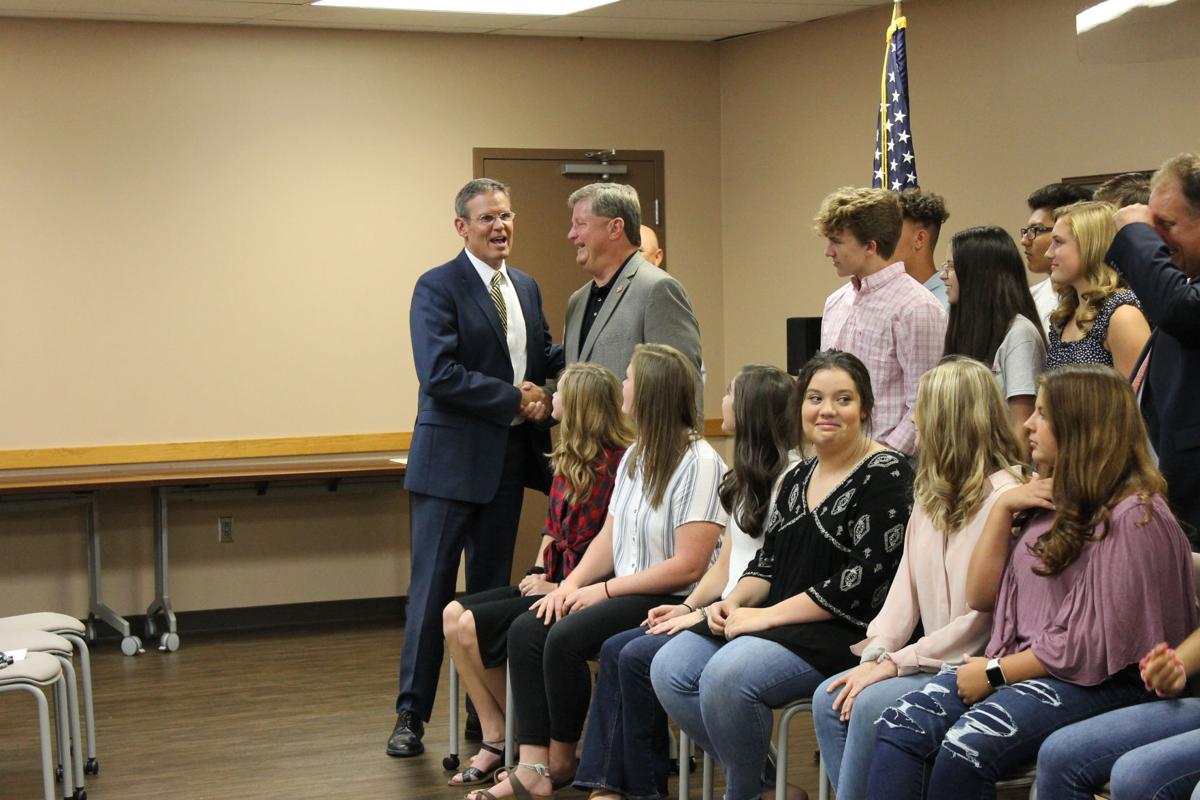 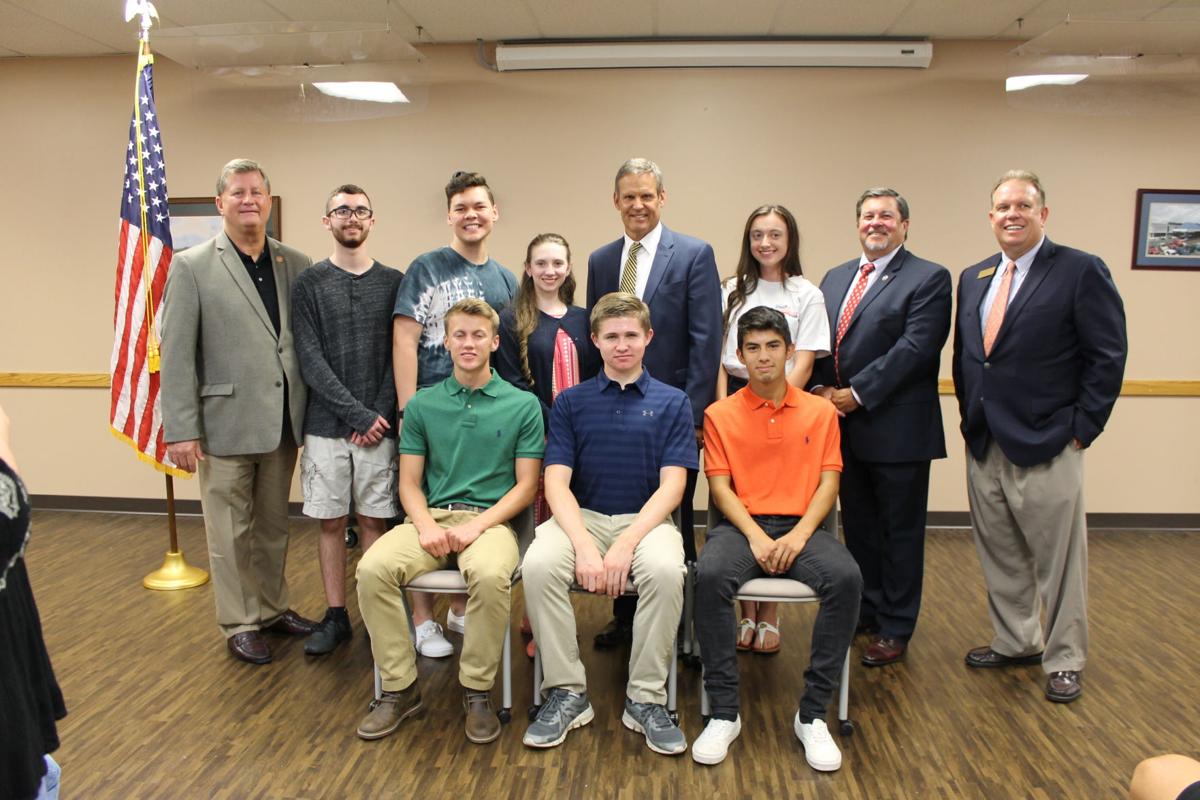 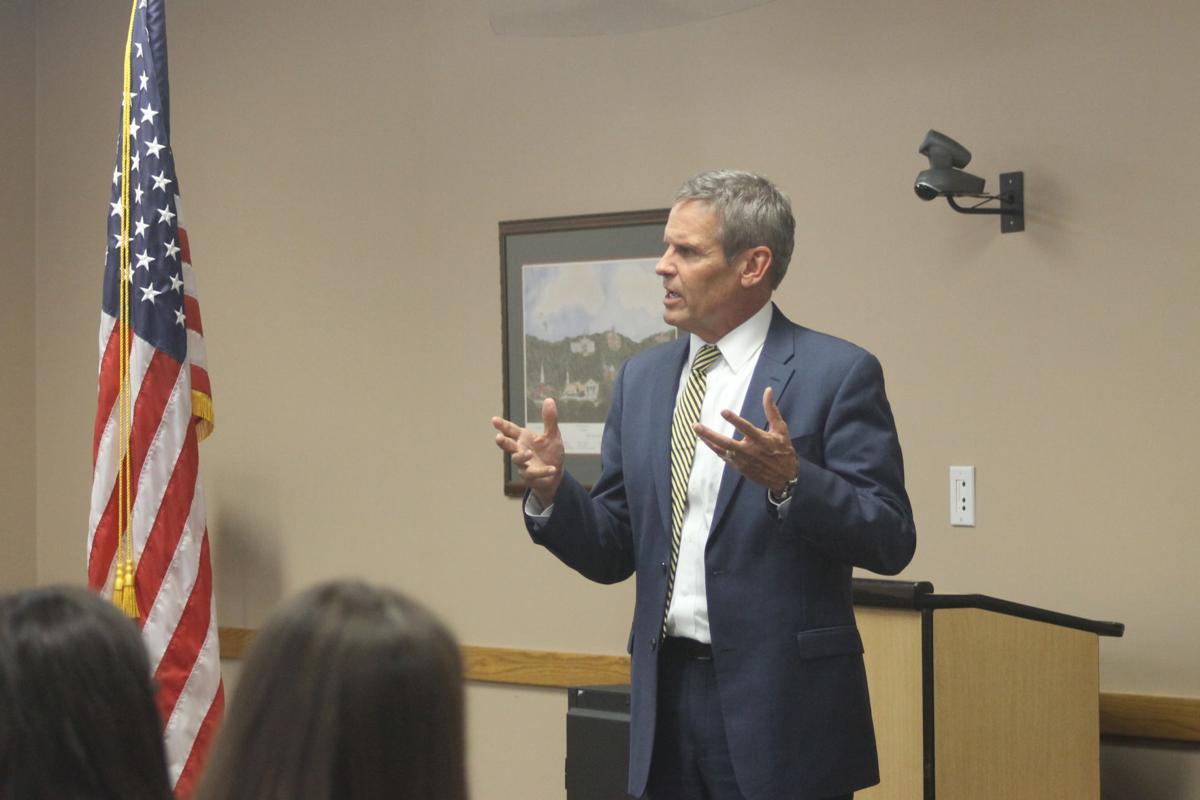 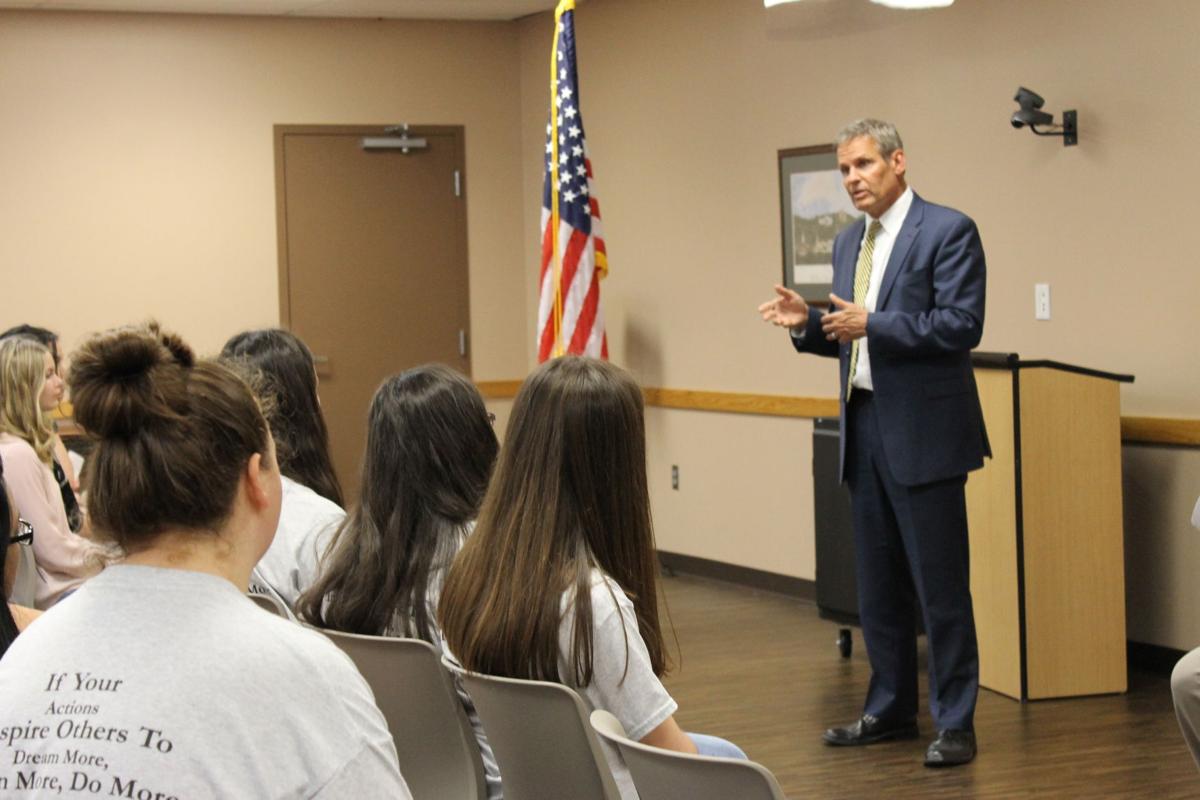 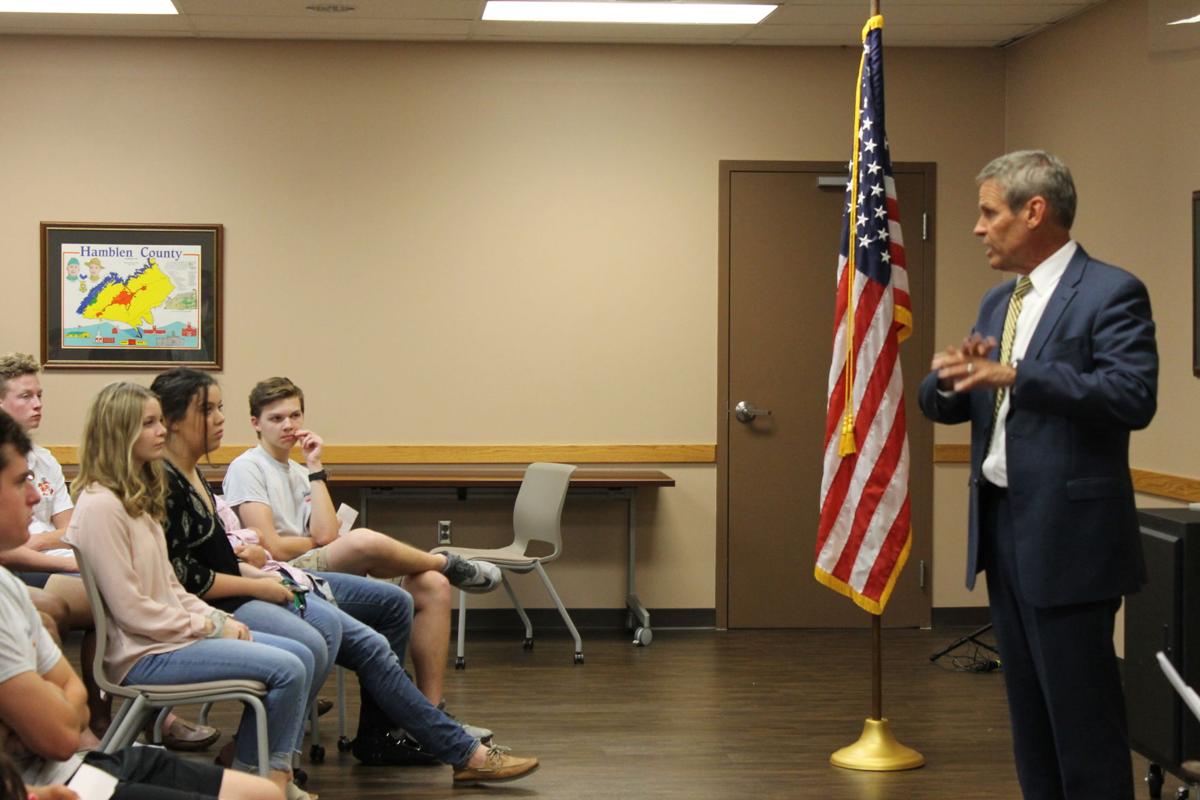 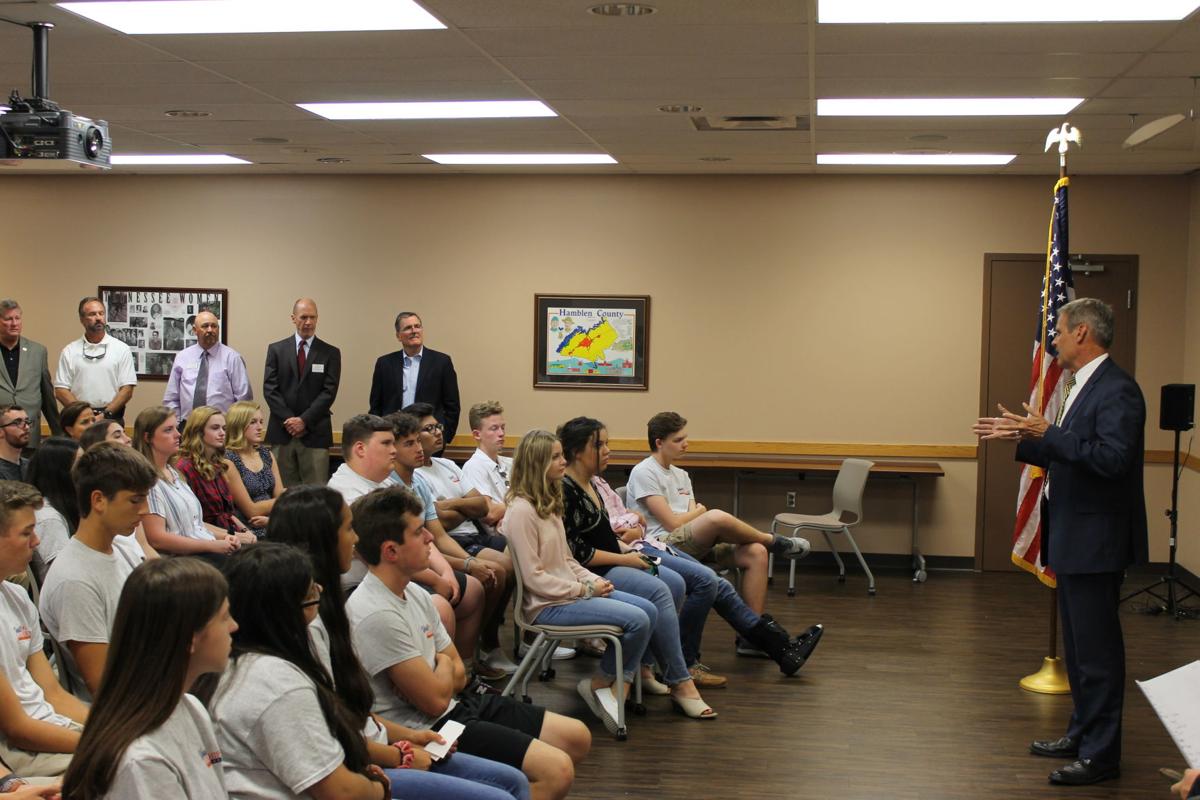 The message was clear to the Hamblen high school students gathered at the Hamblen County Health Department Thursday evening.

Be a servant leader, lead by example and you may be good enough, smart enough, but gosh darnit’ not everyone is going to like you.

“The most powerful form of leadership is servant leadership,” Gov. Bill Lee, R-Franklin, told the group of students Thursday.

Lee dropped by the health department Thursday night on a whirlwind tour through the Lakeway Area and spent 45 minutes speaking with the Youth Leadership Hamblen County class, which is made up of juniors from East and West high schools.

The governor fielded questions from students and spoke in depth about leadership and the values of leadership. He also spoke about his own story, highlighting how when he was 40 years old when his first wife died and it changed his perspective.

It was Lee’s first time back to Hamblen County since being elected governor last year.

The 30 students who attended listened intently on Lee’s message as he spoke.

“I like talking to people in your place in life...” he said. “You have it all before you.”

Lee when asked questions jumped back and forth from serious to humorous.

One student asked, “How do you make everyone happy?”

“You don’t,” he said, to a roomful of laughter.

He spoke about how you can’t make everyone like you and said there were times when he was reading a bad news story about himself that could make him angry. But, he said he found a way to console himself at those times by reprioritizing his focus.

But, the most important message of the night was that the best forms of leadership is leading by example and being a servant.

The Morristown Youth Leadership class, led by volunteer program coordinator Daryl Brady, is in its second year of existence. The newest class with the motto, “The Best Class Ever,” has grown larger than its first entity.

Brady said the students had the opportunity to meet with a true servant leader.

“We’re tremendously honored that Gov. Lee chose to come to speak to our youth leadership class and it was a wonderful opportunity for our students to connect with state officials at the highest level,” he said. “It speaks to the quality of our program to someone of his stature to spend time with these students. His journey through adversity was remarkable and inspiring.”

Lee grew up on a farm and in high school he was involved in the 4H club, he said.

He said as teenager, he had insecurities and portrayed one thing while inside was another. Later, he earned a degree in engineering and went to work at the family business in Williamson County.

The turning point of his life came when his first wife, Carol Ann, tragically died in a horseback riding accident.

He took time off from his company, Lee Company, and took a look at his life. It was then he decided he wanted to help the community instead of just concentrating on his business.

As governor, he said he hopes to portray himself more as a leader and a statesman than a politician. He encouraged students to not worry about titles, but worry more about changing lives. He said if you can be someone others look up to then titles will follow.

“Being impactful to the people around you is the most powerful form of leadership,” Lee said.